Let there be light

It's not like I have been sewing only by the light on my sewing machine or anything. I did have lights. Two torchiere lights stationed on each side of my sewing table, with the light directed up at the ceiling. But you know how a thought enters your head, and instead of passing through, it takes root...and then morphs into an obsession? What? That hasn't ever happened to you?

A couple of years ago Mark changed out the ceiling fixture in my office from a low-emitting 60w bulb to a nice and bright fluorescent. Last week I looked into my sewing room (since lately that's mostly what I do....just peer longingly into my sewing room from my office) and the light bulb went off in my head that I needed a fluorescent light over my sewing table. You know, in case the time ever arises that I can actually spend time in there sewing... 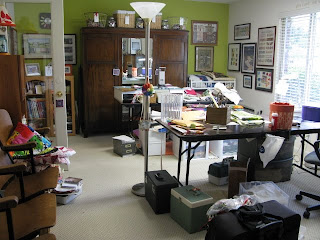 So here's a question: Why is it that when a house is built, they will put light fixtures in the ceiling of every room...except the living sewing room?
I didn't move anything out of the way until the electrician actually showed up, so he helped me move the tables. I think he was a little "shocked" (just going with the electricity theme) to see all the bins of fabric hiding under my sewing tables (good thing he didn't need to see the fabric stashed in three other rooms--that's a blog post for another day). But he graciously helped me move them so he had a place to work. 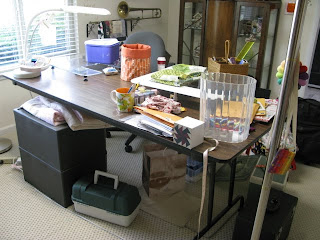 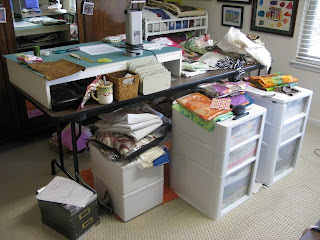 And then, since I could see so much better, I thought I might as well do a little organizing. 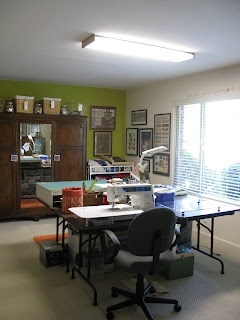 Bright, clean and organized. If only I could have found some "extra time" hiding under one of those piles of fabric...

Ah, doesn't that feel good to get something like that done? Or... at least I think it does, if I remember right. It's been a long time.....

Nice job! And I see something familiar in your pics. ;-)

Wow Cindy! Your sewing room looks Soooo good1 Youre the envy of the neighborhood!

Looks great! Being able to see is a good thing. The before pics are scary - I've never seen your sewing room look like that. The after pic is more like it. You really are the most organized person I know.
Susan

Not true. Many new homes do not have light fixtures in the bedrooms, but do have them in the living/sewing room. - bG

Looks Great!!! Very tidy, organized and plenty of LIGHT!!! Good lighting makes all the difference in a sewing room.