The second picture-heavy post in the same day. I wasn't expecting this one and I want to get it posted while it's still fresh in my mind.

Take yourself back to 1959. What? Some of you weren't even born then? Okay, so imagine yourself back to 1959. I was about 7. My father was a minister and while I remember having a comfortable life growing up, there was rarely any money for "extras." We had a chihuahua named Pepe. He was always a little hyper for me, and I think my parents felt that way as well. Anyway, I wanted a Barbie doll so badly. Maybe my parents were just looking for a way to pass that hyper little dog onto someone who would love him more. So they asked me if I was willing to get rid of the dog. If so, they would use that money to buy a Barbie doll. I know. Shocking. Sorry to all you dog lovers. I totally sold the dog out for a Barbie doll.

The first edition of Barbie had a blond pony tail. I am a redhead and by the time I got my own Barbie, they had come out with the "bubble cut." Imagine the early 1960s. Jackie Kennedy was all the rage, and with her incredible sense of style, it filtered its way down even to Barbie. My Barbie had a red bubble cut.

Somehow, maybe for Christmas or birthday, I don't remember, but Barbie also acquired a canopy bed with a dressing table, chair, "French" armoire and a couple of "store-bought" outfits. I was completely amazed to have a Barbie, and to have her living so stylishly.

While I got rid of nearly every other toy, I saved my Barbie, in the original box, never with the idea that she would be a collectible, but with the hope I could pass her on to a daughter. Or a granddaughter. That happened today.

I had checked with Christa a few months ago, and she said it was fine. You never know these days if mothers want their daughters playing with a doll whose figure is so unrealistic. But this morning Charlotte also had the most adorable Dorothy doll from the Wizard of Oz, and Tiana (spelling?), so the timing seemed right.

We got the box down and started taking things out. Wow, what memories came flooding back. I learned to hand sew with this doll. While I had a couple of purchased outfits, like this stunning red velvet swing coat with white satin lining and a Jackie Kennedy "pillbox" hat and the black dress with the organza collar and a matching big hat (think Kentucky Derby...), 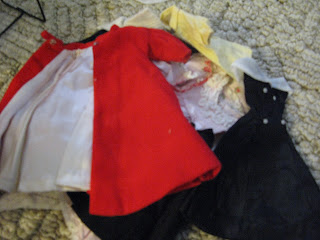 more and more outfits came spilling out of the bag, outfits that were mostly hand sewn. Even though I was the one who made them all those years ago, this morning I was shocked at the detail I had put into them. 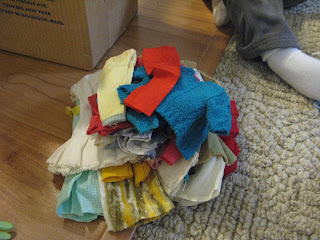 An evening dress (modeled by Tiana), which consisted of a long strapless dress, and then a cape kind of thing that you would put your arms through and it would wrap around your shoulders, complete with a train: 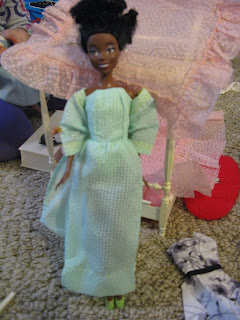 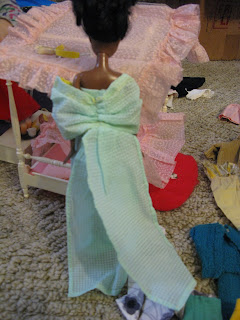 A red denim wrap skirt, lined in red and white ticking stripes, where one tie went through a little opening and tied in the front: 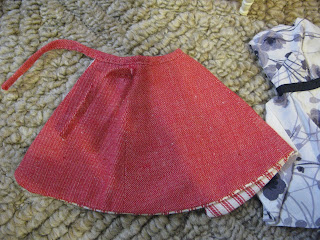 That little white dress with gray flowers, next to the red skirt, was actually made from fabric from a dress my mother wore to church, kind of a shantung silky thing.

Here we have a corduroy coat, with an attached scarf to wrap around your neck. Check out the fringe on the ends of the scarf. 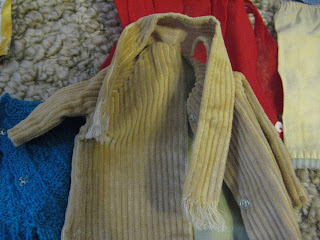 Here we have a three-piece knit ensemble (I think it used to belong to a skirt my grandmother wore at one time) which consists of a pencil skirt, short-sleeved shell, and jacket to complete the outfit, a long satiny evening gown with sequins, a short summery party dress with eyelit overskirt, and two pairs of high-waisted pants. 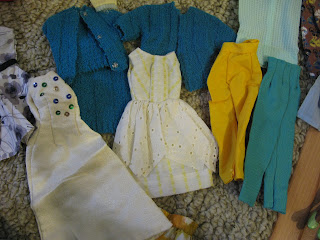 ﻿Here is the white dress again, the summery dress, and another flower shift-style dress with an odd sailor-collar thing I guess Barbie tied around her neck, and then a pretty pink wool coat. 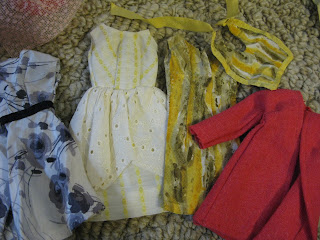 A see-through overskirt (not sure what Barbie wore it with) but check out the rickrack on the border, and some capri pants with little flounces on the bottom (wow, the elastic really crackled when I stretched it out a bit). 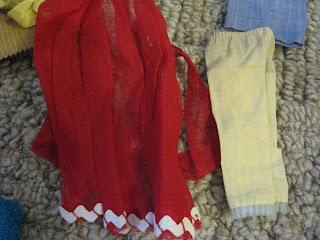 Probably my favorite, this pink wool number, with the black embroidery trim and black fringe (sorry about the weird fit around the bust--I think Barbie needs to have the darts pressed down and she'll be just fine...) 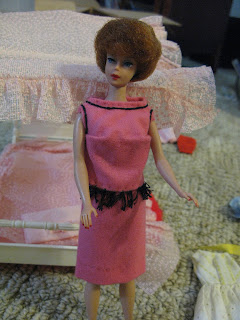 This is what I had forgotten: all the hand sewing, darts, tucks, trim. While Charlotte was busy changing Barbie's outfit from one to another 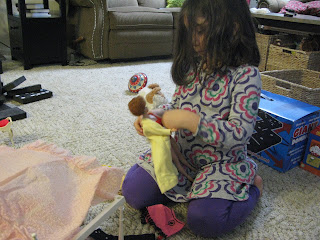 and Levi was doing the man thing and getting the furniture in order, 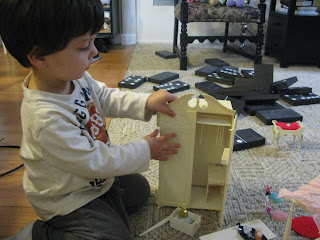