Let's just call this the anniversary edition, because Mark and I went to beautiful Carmel, California, to celebrate our anniversary. It was a major one. I don't have to actually give the number, do I? Okay...it was our 40th.

So anyway...about every four months, we head off to the central coast of California and go to Pismo Beach. Here's the thing. Pismo doesn't have a town that entices us much. There are some places to eat that we really enjoy. But other than that, the best part is where we stay. A full view of the ocean. We stay on the second or third floor so we can leave our sliding door open a little bit all night and listen to the ocean. 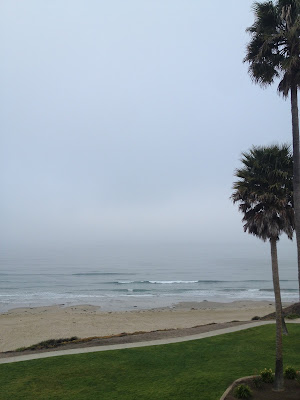 On the other hand, after we moved to California years ago, and Aaron was about 9 months old, we left him with my parents and went to Carmel. It was really our first coast experience.  The town is totally charming.  More art galleries than you can imagine. We were entranced with the town. The thing is, it is nearly impossible to get a room with a good ocean view. Not with anything within our budget an affordable price tag, that is. It's a trade off. We decided to celebrate in Carmel. We have a lovely couple of days. The weather was grey and drizzly. Perfect, after the relentless sun and heat of Fresno.

We ate fabulous food at our favorite restaurants (even though it looks like all we I did was drink Chardonnay.  Okay, the thing is, after I took the most perfect Chardonnay picture in Portland, 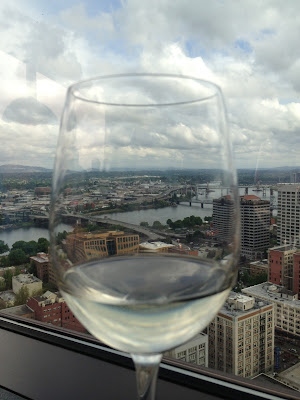 I have tried hard to duplicate it. Without success, I might add. But I spent a lot of time trying...all for the cause of art...

On Friday, we didn't get to Carmel until after supper time. So after checking in, we walked around. Carmel is one of my favorite quaint little towns to walk around in after dark. It is quiet, lights are on in the gallery windows. It's just beautiful. We went to our favorite watering hole, A.W. Shucks, where they specialize in oysters. 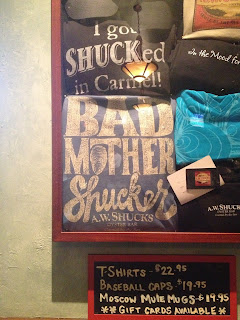 No we didn't have any--we just spent a little time relaxing. 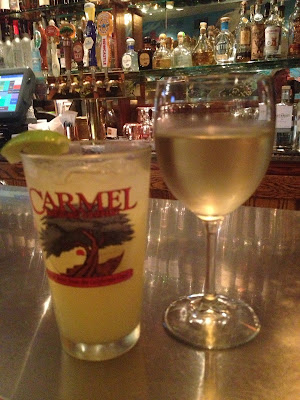 The next night we went to a restaurant we have frequented many times over the years, Forge in the Forest. We always choose to eat outdoors, surrounded by ivy-covered walls. 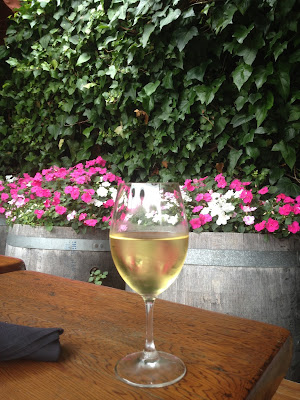 We went to one of our favorite breakfast restaurants on Sunday morning. It was about 10 a.m. and when we saw the waitress walk by our table with cheesecake, our first thought was, "Who eats cheesecake at 10 in the morning??" What we didn't notice was an engagement ring between the two strawberries on top of the cheesecake. Then we heard someone saying, "She said YES!!" 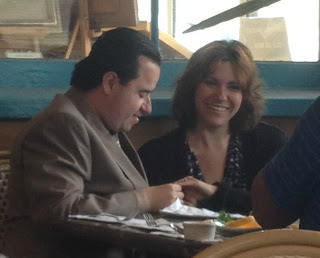 An engagement right in front of our eyes! How cool.

The final night, we went to Chart House, in Monterey. Mark had made reservations. And when our waiter brought the menus, they actually had our name (although it was misspelled...) on it! Do you see it? It says Happy 40th Anniversary! 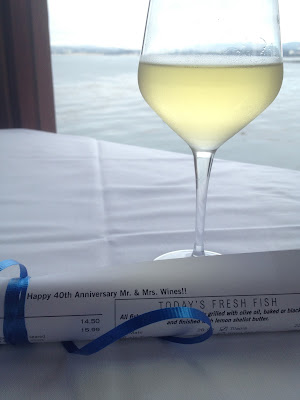 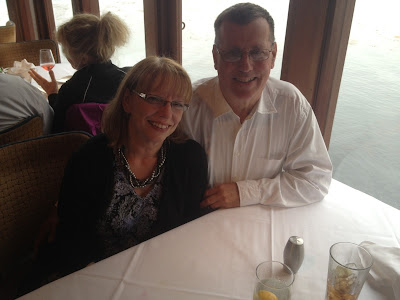 Our waiter's name was Spartacus. How cool is that? We had creme brulee for dessert. 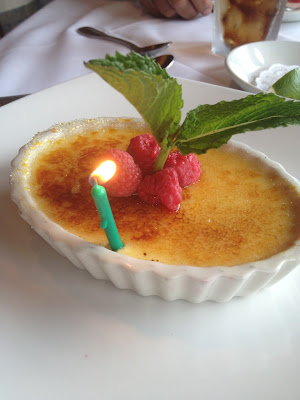 Did I mention art galleries? Have you ever seen the Blue Dog? The artist is George Rodrigue and apparently the paintings are a tribute to his now-deceased bluish-dog named Tiffany. Anyway, there has been a gallery in Carmel for nearly as long as I can remember. It has moved. To a larger location. The yellow eyes kind of freak me out. But nevertheless, we took pictures anyway of some of the 3D art. 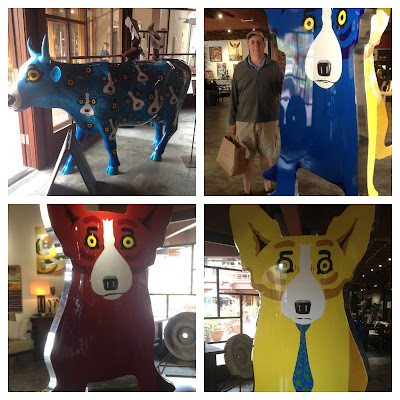 Yes, a cow decorated with the Blue Dog. And in the other three pictures, the blue dog rendered in three colors. With Mark added next to the blue version just so you can get an idea of the scale. My question: what kind of room do you need to actually purchase this piece of art?

Since I have have again taken up knitting and crocheting, I wandered into  a cute little yarn shop. I was charmed by her sign about the hours she is open. 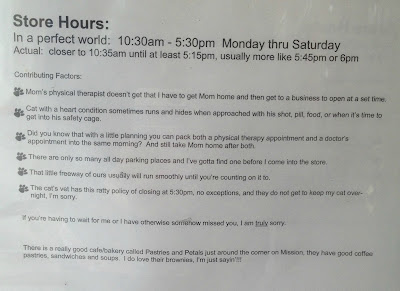 When I had a few spare minutes, I completed the last of the Lego blocks. All 81 are done. They now just need to be crocheted together. Stay tuned. 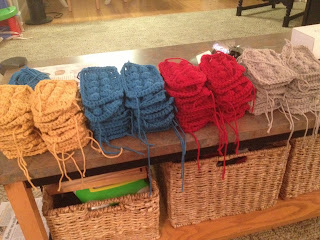 So that's it for this week.