Little House on the Prairie

Click. You are now tuned to the History Channel. Because...I'm really behind on getting caught up. So even though I may be breaching some kind of blogging etiquette or something, where no one really cares what you did last month, there were such great highlights in our week in Minnesota that I'm certain you will agree it is worth sharing.

First of all, we didn't stay in a little house. We stayed in a two-story farm house with our good friends, Roger and Clarine. Nor was it in Walnut Grove, that town where Little House on the Prairie is based. But we were really close to Walnut Grove, so there you have it.

We went back there for Mark's high school class reunion, which always coincides with the Butterfield Threshing Bee, which takes a town of 600 people and turns it into several thousand for the weekend. Think tractors, lots of tractors. In a parade. Long parade. And not just your run-of-the-mill tractors either. Big, small, unusual (to me at least, but I guess that is my city girl showing through). 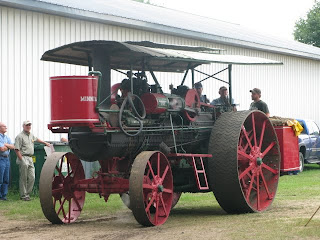 Mark's class reunion. Well, first let me say that I graduated from a school in Seattle in a class of over 700. And keep in mind that of course his whole class was not able to attend. So including spouses...there was a grand total of....31. I have never been to one of my own class reunions, and I have attended quite a few of Mark's, so it was very fun for me as well to see familiar faces. 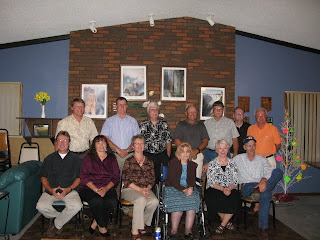 I was able to spend a bit lot of money at three different quilt stores. Interesting quilt shops too. One in what used to be a bowling alley, one in which the wife shares space with her husband's feed store, and one in Mankato where I got Minnesota-themed fabric to make Mark a quilt I've planned for a long time called Minnesota Hot Dish (and if you are from Minnesota, you know exactly what hot dish is. Out here in California, we call it a casserole...) 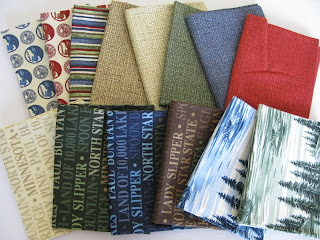 We went to Bergen Bar and Grill twice. Bergen, Minnesota, with a population of 16, but wow, do they know how to grill. While we waited, I took a picture of the local crops: corn and windmills. 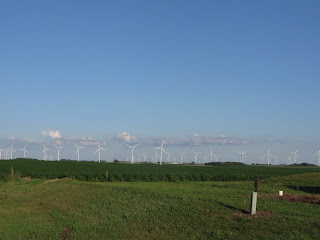 Bergen Bar and Grill doesn't seat too many people inside. Like the town, it's rather small. But they do have a nice deck where you can wait in nice weather (in bitter cold winter, you wait in your car and they call your cell phone). And if you want to order a soft drink (okay, "pop" for you Minnesotans) or a beer, you just walk right up to the window and place your order. We went to the Fairmont County Fair. We actually changed the dates of our trip, leaving and returning a day later than we had originally planned, so we could attend the fair. As far as country fairs goes, I think it was pretty typical. However, this kind of blew me away. Someone was raising money by selling tickets for a raffle. See the ticket container? See the money box? See the empty chairs???? Very trusting people here in Fairmont County... 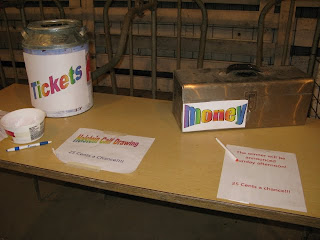 Now you may be asking yourself why we would want to change the dates of our trip. To go the Fairmont County Fair. Well, all because of these guys, Tonic Sol-Fa. Amazing acapella singers. They sing a huge variety of music, jazz, pop, country. Mark first found them while channel surfing a couple of years ago when they had their own PBS special (and they are filming another one--they're that good). And here they were, at the fair, free with our paid admission of $3/person, thanks to Roger and Clarine getting tickets on the radio! Really outstanding concert. Well worth $3. No, really, I would have paid ten times that to hear them in person, and we were in the sixth row! 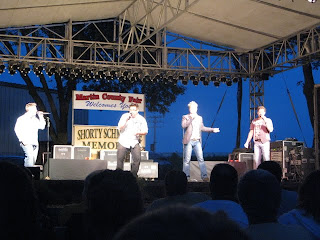 But my personal highlight? It would have to be meeting my online pen pal, as Mark refers to her. My friends and family know that I am blog-obsessed. Some people spend free time playing free cell or solitaire. I read blogs. Even when I don't have free time. Anyway, first I became a fan of her daughter's blog, How About Orange, and I can't even tell you how I first discovered that one. But shortly after I started reading it, I was hooked. The best part was the dialog between Jessica and her mom, Grandma G, in the comment section. I was intrigued. I clicked on Grandma G's link and found out she lived in southern Minnesota. About 40 miles from Butterfield. We emailed back and forth for nearly a year, found out we had a lot in common, including each of us having a super cute granddaughter with brown curly hair, and we made plans to meet. She lives out in the country so we met at the very cool coffee shop in town, Left Bank Coffee, which Mark learned was named that because apparently there used to be two banks in town and this was....uh, the one on the left. I have to admit to being nervous while we waited. You know, kind of like a blind date. Like what if she met me...and hated me?? Anyway, thankfully, that didn't happen. We drove out to where she lives, which Mark, being a farm boy at heart, really enjoyed. This is the view from Candy's house. Thanks, Candy. Meeting you was definitely one of my highlights. Who knew I would make such a good friend because I love the color orange? 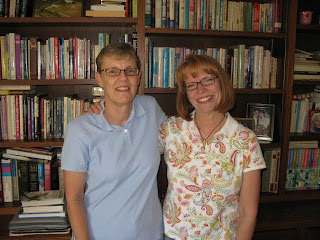