That title may be a little convoluted, and the explanation probably won't clear things up much.

The plan for each of my grandchildren was to spend a bit more time on their first quilt, a few more details. Not necessarily an heirloom that they couldn't touch, because really, what would be the point of that? Quilts are meant to be loved....and touched. But just a little more time spent planning and making. Then their second quilt would be one to drag around, snuggle under, play on, wrap around and read a book, toss in the laundry.

Here is the back of Levi's second quilt. And it's really the reason I even made this quilt. Rows of wild animal Minkee. Have you ever felt this stuff? *sigh* If only you could feel it through the computer monitor. I think everyone should carry round a little scrap of this stuff to touch when you're feeling stressed out.

And I had no idea when I purchased the Minkee that Levi would turn out to be so tactile. He loves anything soft, so I'm hoping this will be a big hit with him. 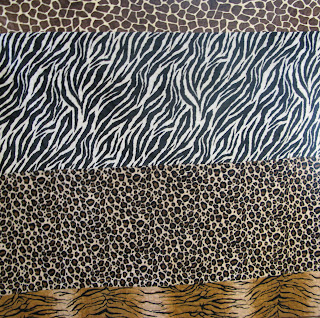 So then I had to find an idea for the front, to go with the back. And for a Number 2 quilt, the front actually took a lot of time than I had anticipated. All those little pawprints.... 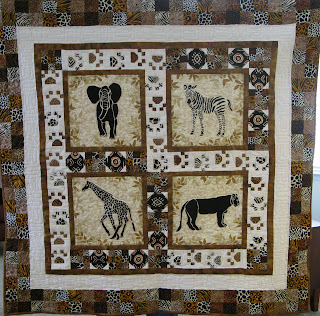 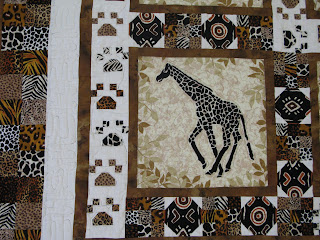 You may be wondering: what does his Number 1 quilt look like? And that would be a really good question. Let's just say that it's all planned out, and involves a bit of Los Angeles Dodgers fabric and a label from a pair of old Levi's jeans, and a lot of detail (which will qualify it for a Number 1 quilt).
Is this making any sense yet? The back of the quilt was priority over the front, and the "second"quilt was made before the first.
Eventually you will see the Number 1 quilt, which I haven't even started yet.
See what I meant about "convoluted"?
Posted by Live a Colorful Life at 11/05/2009

I understand! I hope this will be wrapped under a decorated and lighted tree! Perhaps with a stuffed elephant or giraffe and jungle book. Then, he would be all ready to snuggle down and be cozy and read a book and drag his quilt #2 around!

I got a peak of it today! Spread out and for sure being loved! The minky (minki?) side was up for some good tactile experience.

You were wild about the super soft minkee for the back.... which is how quilts that weren't even on the map yet take precedence and get done before "first" quilts do. It is fabulous! All those tiny paw prints..... zowie!

Makes perfect sense to me :)

It's been on the floor all week, Grandma, and Levi has loved playing on it. I have found him more than once this week just laying with his cheek on the minky :)