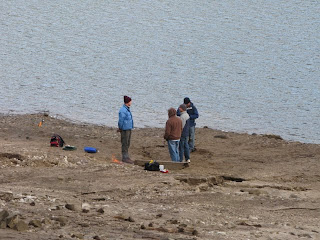 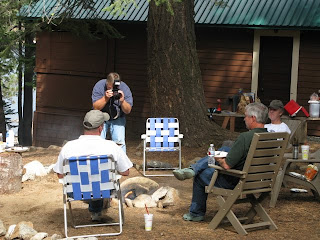 Yahoo congratulations! It's a great article!

You guys are FANTASTIC! That slideshow was amazing. I hope you can get copies of some of his pictures of you and Mark...there were some good ones.

Bob just came in and said, "Hey, there is a great article about Mark and Cindy and their cabins at Huntington on the LA times website!" I read it and then I checked your blog and found the link to the slide show. Great pictures and a wonderful article. Congratulations on your 15 minutes :)

Just went on and read the article--terrific write-up. Sounds like an idyllic place to summer. And a lot of work to button up for the winter. I loved the slide show as well.

Thanks for posting it.

It's from reading way to many LA Times over my lifetime. Here is a quote from wikipedia:

"One of the Times' best-known news columns is "Column One," a feature that appears daily on the front page to the left-hand side. Established in September 1968, it is a place for the weird and the interesting; in the How Far Can a Piano Fly? (a compilation of Column One stories) introduction, Patt Morrison writes that the column's purpose is to elicit a "Gee, that's interesting, I didn't know that" type of reaction."

Perhaps it is Aaron's reading of Column One that gave him all of his random bits of info!

Awesome article! I would love to spend some time. Peaceful and serene! Congratulations!!!

That is so neat! The photographer did a great job capturing the beauty- we might just have to head up there one of these summers!

cool! how exciting for you!