Scraps of This and That

Blogging quilters are so generous. Maybe it's just quilters in general. When I first started designing items with selvages, Ashley was one of the first people to donate to the cause. In turn I made her a pincushion. 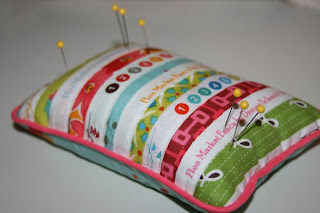 (picture from Film in the Fridge)
In turn she offered FMF scraps in exchange for another pincushion. Considering how FMF scraps are like gold, that was an unbeatable offer. And now she is sending me one of these amazing potholders. Thank you, thank you! 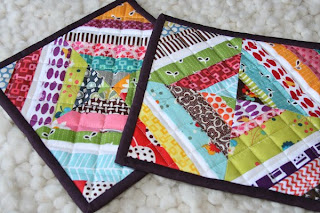 Picture from Film in the Fridge
When I mentioned I was hooked on hexies, but not really wanting to finish Civil War repro fabric hexies I had started several years ago, another quilter emailed and said, how about a trade? Your hexies for some selvages. Another win-win. And speaking of hexies, I had a little helper this morning. Sometimes it takes a different set of hands to show you a new way of organizing something. It also requires an extreme degree of concentration. 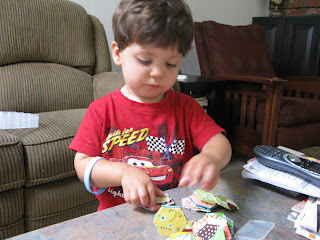 This doesn't have anything to do with quilting,  but the other night we went to Todd Beamer Park, a really great new park in town that has lots of fun water features. What a cool way to spend some time on a hot summer night. Pretty much Grandpa's idea of a perfect evening... 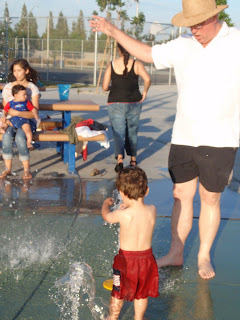 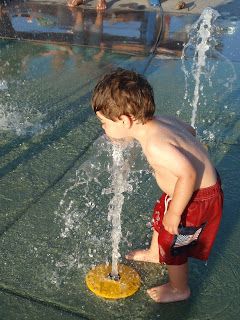 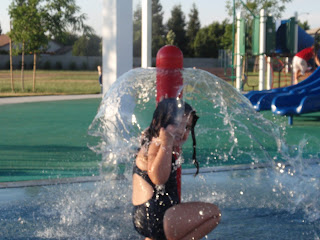 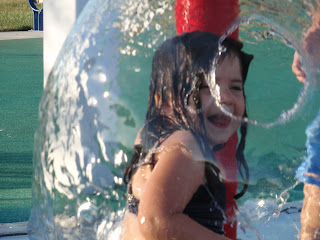 Love the potholders! Lucky you!

And I'm really glad Grandpa had a fun evening. Looks like he had the best of companions! :)

I saw those posted on Ashley's blog, and cheered for both of you! I love the rectangular shape of that one you made for her. What a cool idea to trade with others, especially with that hexie swap. That park looks like a fun place to spend a summer evening!

you were so nice to make me two fabulous pincushions!! I hope you'll enjoy the potholder! :)

Wooooooh! What fun things to celebrate!

What a cute little hexie sorter! I have such good memories of playing at water parks with my children when they were small :)

Love the pic of Levi taking one to the face! What a trooper!

What a cute pin cushion and pot holders. How sweet to have some sweet goodies on the way for you. :o) I recently put a button on my blog titled " bartering " and would be happy if you wanted to take a look. :o)
Sincerely ~ Tricia

Holy guacamole - those are the BESTEST pincushions EVER! Sorry, I don't mean to shout...but they are just too cute.