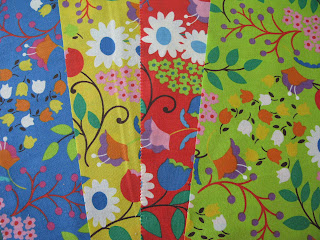 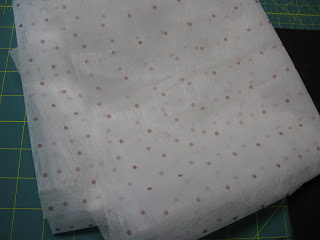 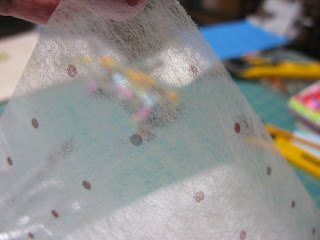 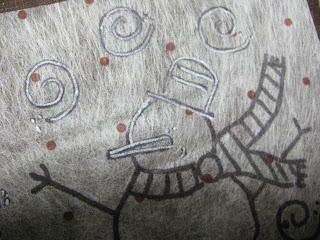 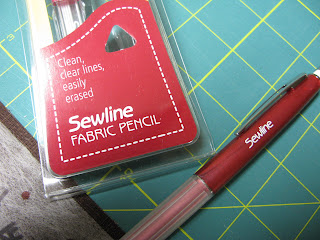 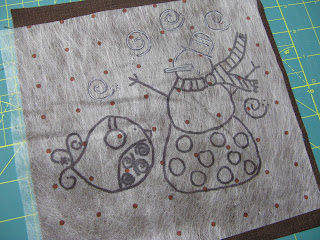 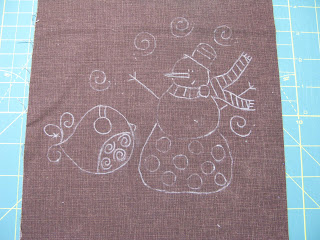 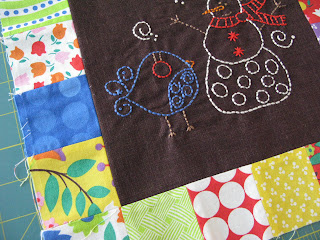 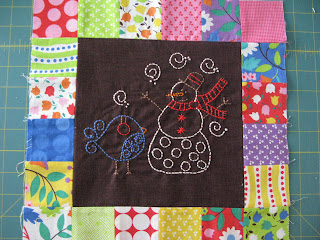 Cool! I never would have thought that tracing through interfacing would work. I gotta find me that pencil!

Also, I LOVE your colour combo. Better than the originally-suggested one, to be honest.

How cute!! Love your block!

It looks great on the brown background - the colours really pop and the choice of border fabrics works beautifully.

Now that is a tutorial I really need! I've never heard of tracing through the interfacing. Your embroidery looks fantastic!

Super super cute! This is going to be so awesome!

Neat idea, I will have to try that when I trace my pattern for the block. Thanks for sharing the tip.

hey...I have interfacing, that pencil AND some dark linen. Next week I am gonna try that for sure..

That is SEW cute!! Great tip on using the interfacing!

Thank you for sharing. I have to get one of those pencils! I'm never happy with my marking tools.

So cute! I adore snowmen, and this color scheme is perfect!
Thanks for all the tips and bits!
hugs, margie

Oh thank you! I have been gearing up to do some embroidering and I was just starting to wonder how I was going to mark the fabric. Right through the interfacing, awesome!! I love your block.

That looks awesome, Cindy! Maybe if I organized my embroidery floss I'd be more motivated to use it :)

What a clever way to mark the embroidery. I love your fabric selection. Who doesn't like a little birdie and a snowman!

janpo52
Very cute! That's exactly what Kansas snowmen look like! Actually, I was paying attention to your technique. Like it! Janice

How did you like embroidering on linen? I am a full-on embroidery novice, and have only done Kona cotton so far, I'm curious if you find the linen to be any easier or more difficult to work with. :) Thanks for the awesome tutorial on marking!!!

Brilliant idea!--I am going to have to file that away for later use. =)

I love your version!

That tracing interfacing looks so cool! I went to Joanns today but forgot to pick up some of this stuff, darn it. Such a cool way to trace the designs for this fun stitchery project, or your own sketches. Love your brown background, which really makes the stitchies pop off.

I'm almost sure that Bohin Transfer Veil is in the same category as this tracing cloth.... will get me some :-).
Thanks for sharing!!!
Oh and btw... lovely colors on the Hoopla!!!

I love the bright colours with the brown. Gorgeous!
Thanks for the tutorial :)

Beautiful block! I sort of want to do this quilt along but then I remember how much I don't like to embroider. For now I'll just look at your blocks and be happy. :)

oh, my goodness, that is CUTE!!! i love your embroidery!

I love the look of this! Thanks for sharing your method of transferring onto dark fabric, too. It's beautiful!