First, a note of clarification is in order. This quilt, which is already pretty spectacular, is for Levi, my nearly 3-year-old grandson, and was primarily put together by my daughter-in-law, Christa. I was merely "outsourced labor" and helped with maybe a third of the sewing. It took a tremendous amount of time on her part to cut all those 1" strips and then organize them in the proper color/size order, as the quilt was assembled in long horizontal strips the width of the twin-sized quilt, which were then sewn together into strip sets of ten rather than traditional pieced blocks. I have never constructed a quilt in this way before, and Christa actually had to color the black and white pattern with colored pencils so we could figure the whole thing out. I'm not sure I would make another quilt this way because of the time element, but it IS going to be stunning.

Thank you to everyone who took the time to give me advice on quilting strategies. I see these things on my weekend horizon: basting spray, khaki thread, 3.5 stitch length, walking foot, and lots of patience. 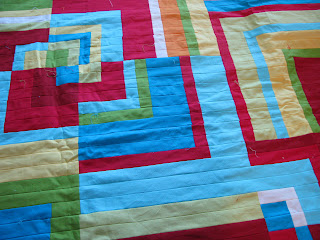 Next up, my blocks for the 3x6 sampler quilt bee went out in the mail on Tuesday (the pink and brown block is on its way to The Netherlands!) 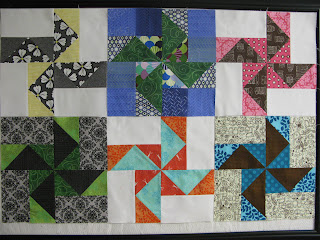 And finally, I'm pretty sure if you have been in the online quilting community for any length of time, you have been on the receiving end of someone's extreme generosity. My good bloggy friend, Crystal, and I are in the same quilt-along, Bottled Rainbows. And while I'm still in the planning stages, Crystal is knocking those blocks out like crazy. In fact, I'm almost certain she is done! One of the first blocks she posted was her pumpkin block, with the cutest fishy fabric. 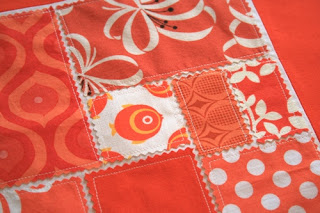 (Photo from Sonnet of the Moon--check out all of Crystals'a amazing blocks!)
I commented on how fun it would be to have a little scrap in my own orange block and she immediately let me know some of it was on its way to me. 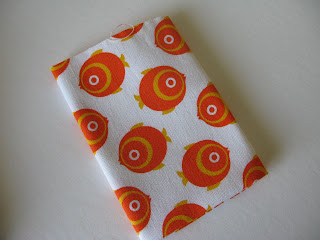 When the package arrived a couple of days later, not only did I have a very generous scrap of the adorable fishy fabric, there was also a stack of Katie Jump Rope! And some Neptune selvages! 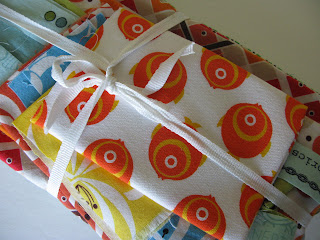 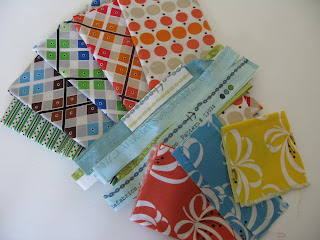 This has happened to me before and I'm always awed and overwhelmed at the generosity of women I have never met, yet who are friends in the truest sense of the word, not just because they willingly share their fabric but because they open up and share their lives as well. Thanks, Crystal!
Posted by Live a Colorful Life at 3/10/2011