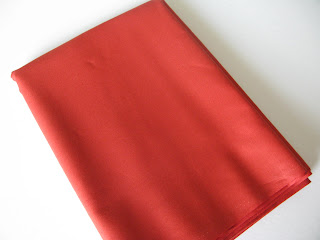 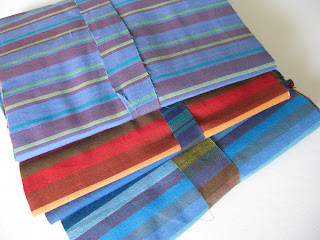 That must be your "grandma voice". I don't remember you sounding like that. ;)

Courtney loves your video! She's watched it about 10 times, and had me promise she could watch it again after her nap. I guess she knows a cute boy when she sees one! ;)

I thought that was your daughter's voice!! Darling video!

Love it! I hate the way I sound on tape also. I KNOW i don't really sound like that! haha

Okay. Now I want your Kaffe Fassett stripes. Why don't you just start getting two of everything? And I love the video. And the way Charlotte is coaching her little brother.

Love your new fabric! What a nice thing to come home to.

Yum, "Betty Orange"! I also wish it were more readily available and easier to track down. Maybe one day...

Cute!
and for the answer of why you think you sound funny or different:

How your voice is recorded is how everyone else hears you..you just aren't used to hearing it that way. You sound fine by the way! ;)

I recorded the voices for an ex-boyfriend's short animation and he proceeded to make my voice sound exactly like my mother. Thankfully, both he and the film are gone now, so I never have to listen to it again.

Two cute voices, I think! My 4 year old grand daughter and I always ask each other what our favorite color is TODAY...(because It's so hard to have JUST one!) She usually wants me to say mine first and then says, "That's mine too!)