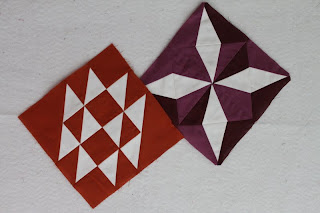 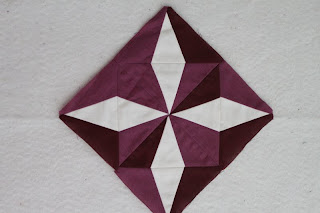 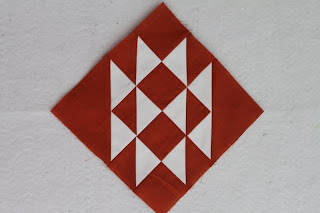 your blocks are great--love the color for the 'hovering birds'.

I love the optical illusion of the mulberry block! And yes, we have brown thrashers, which are rusty-colored. They're very pretty.

Love your blocks, especially the mulberry one!

They're both gorgeous. They look so different made out of solids

Well...maybe cardinals are sometimes a little bit of a rusty red? I really dig your century of progress block, love the purple choices!

Well, both robins and blue birds have rusty colored bellies, and I'm sure there are a ton more. :) I thought Century of Progress might have some color placement issues, but now that I see yours, I get it. Thanks for sharing!

Beautiful. I love those solids.

The mulberry blocked seems to be 3D. Maybe the reason for color placement. Now that is progress.

I'm enjoying your blocks made from solids...such nice sharp contrasts...especially in today's blocks. Come on over and watch the bird feeder with me, I'm sure we will see a rusty colored bird...maybe an Orchard Oriole. Your comments mirror mine, sis! This lady was a bit defensive, don't you think?

Yep, still loving the heck out of your blocks.

Love these blocks. I think the color placement is so cool. Really sets off the piecing. How fun to learn the stories behind each of these.

the contrast in you blocks is so powerful! You are going to make a stunning quilt with such impact

Your blocks look gorgeous. You are an impeccable sewer!