Have you ever picked a project that requires you to learn multiple new techniques? That's what I have been doing all weekend.

Joann's had a great sale. Nearly everything I wanted was 50% off! So I stocked up on a variety of fusibles (this may be either good news or bad news to those of you who have received an email from me whining about my lack my lack of knowledge politely asking for advice about which fusible to use for a certain project). 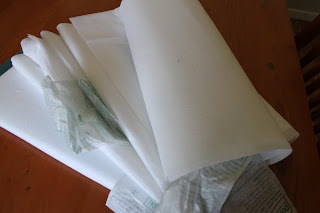 Stocked up on needles. Which turned out to be a good idea. 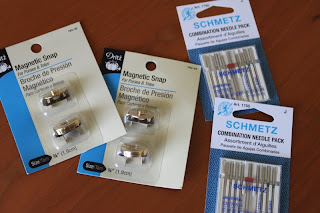 Then I started on the projects, and tried to accomplish the following.

Project 1:
*Use the AccuQuilt Go!baby to cut hexagons. Because the giveaway is almost here! 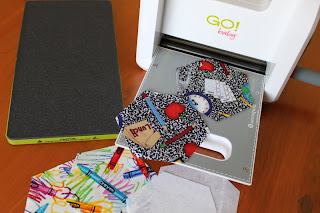 *Add fusible to all the focus fabric. (For those of you rolling your eyes right about now, seriously, I hardly ever make anything other than quilts.)
*Put in a zipper. I used to make nearly all my own clothing so I've put in lots of zippers. But never with fabric end covers. And I broke a needle on each end. And yes, I do realize that needles can't sew through metal. Oops.Good thing I stocked up.

Project 2:
*Cut more hexagons.Go!baby.
*Used Steam-a-Seam. Really. I told you--fusible applique is a new experience for me.
*Zigzagged around all the applique. It was FUN! 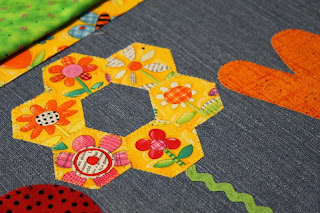 *Discovered fusible fleece. Awesome stuff.
*Experimented with Aurifil thread.A giveaway is just around the corner, along with my comparison thoughts on Aurifil and Superior. 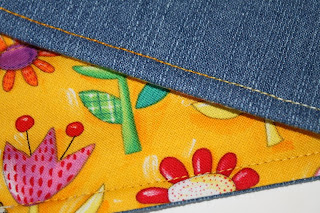 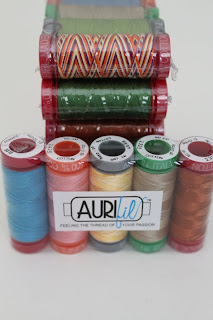 Oh, and I also completed this block, my favorite so far, although obviously it could use a bit of pressing. 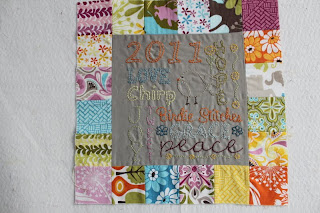 Now go see what everyone else has been up to in the last week. 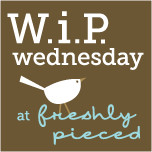 You have been busy! The block with the embroidered centre is beautiful!

What a lovely block! And great to have all those new fusibles to experiment with.

LOVE your hexie flower and that block!! Both are just beautiful. I don't know much about fusibles either-- but I do have a chart that I cut out from a magazine article that I refer to as needed. Haven't tried the fusible fleece-- definitely have to add that to my list! Kudos to you for exploring new territory-- you're on a big learning curve right now!

On a side note: I am loving the selvage pincushion that I won from you when your launched your Name Game series. I use it for all my needles, and it is especially helpful to put the machine needles into the corresponding numbers on the selvage (7, 8, 9) when I switch around during a project because who the heck can read those teeny tiny numbers on the needles, even with my magnifying glass!! Saves me a lot of time! So thank you, thank you!

Holy cow, you sure have been busy!! Can't wait to hear what you think about Aurifil, I've never tried it and am very curious :) Your hexy flower is so pretty! That's so awesome that you're trying so many new things, so inspiring!

Sounds like you had fun! I never thought I'd be jealous of someone for shopping at Joann's, but now that I'm far, far away from one, I am. Love the block, too!

Everything looks lovely! I think Steam a Seam is a very nice fusible. Your hexagon flower is so colorful and fun! Glad you were able to make the sale....it is always good to stock up on the things you will need :)

You've been busy! can't wait to see those hexies come together.

Love your birdies! Fusibles are your friend. Fusibles can be fun!

Did you find an appropriate interfacing? Did you start? Did it work out ok for you? I hope so!

Wow, I'm impressed with all the new techniques you're putting into a new project, especially the fusibles. I really love fusible fleece too - love to use it in patchwork bags and mini quilts too. This post reminds me that I need to stock up on needles too. I have broken a few over summer while putting in zippers - something about that metal tab at the end of the zipper that I forget to go around! Cute stitchery block!

First, the burning question: How in heavens name did you get first on WIP? The only thing I can figure is that you stayed up really late last night. Or got up at the crack of dawn. You're amazing.

Projects look like fun, and it will be interesting to read about your thread experiences, your accuquilt experiences and fusible tips/tricks. I just got back from the nephew's wedding to a ton a grading, so my project in process is a bit lighterweight. But I also stocked up on fusibles at JoAnn's (but I did it the week it WASN'T on sale) to make a travel bag. I'm going to go and look up what you wrote about making yours.

Oooohhh... I love the appliques! By any chance are they on a certain tote bag? Can't wait to see the whole thing!

I also love the embroidery on your block... beautiful!

My problem with buying all that fusible stuff is keeping track of what is what!! I decided that I need to make some labels for plastic bins and put each kind into each drawer--hello!

I love your block too btw!!

Super cute. I like the backing on the hexigon flower :)

I'm such a convert to Aurifil - I started using it for hand piecing earlier this year, and now I sew everything with it. I'm about to test it out on garment sewing for the first time.

Your hexies look fab too - I've never been tempted by a Go! Baby, but easier hexagon cutting makes it rather more appealing!

I want to see that whole beautiful hexie flower bag!!! What a great week! I'm sold on fusible fleece and am lining all my bags with it now instead of that icky wrinkly interfacing.

Your hexagon project looks great! I have been using my GO! baby a lot lately too -- I really love it!

You've been busy! I love the hexagon flower - so bright and cheery!

I love your projects and am so wanting to work on new techniques. Someday....... Enjoy the threads. Let me know your input on Superior Threads.

Lookin' good! Sorry about the needles!!

You have been very busy. Love your hexies, and the embroidery in the centre of the block looks fabulous.

Wow! You have really been busy! Glad you had fun with the fusible applique! It is sort of relaxing, isn't it? Can't wait for your giveaways. Too much fun!

Wow, look at you go! Love your embroidery. Thanks for linking up to WIP Wednesday. : )

I haven't done much experimenting with fusible appliqué - I'm curious to see your final results!

Been swamped with school-related commitments and work... Mostly in a good way. Definitely a steep learning curve. :-)

Wow what a great bunch of new techniques to learn. The world of fusibles can be very daunting/confusing. I'm hoping to narrow down my choices so I know exactly which ones I want to use on which projects.

Can't wait for the big hexagon reveal! I actually have the hexie die so can use a fun project for that. You should do a post all about fusibles, interfacings and such...I can never keep them straight...usually I will skip any project that requires them...but lately too many cute ones have that listed in the supplies ;-)

I don't officially participate in the WIP Wednesday linky thing...but you've inspired me to start keeping track of mine...on a piece of notebook paper...or should I say a book full of notebook paper ;-)

I like fusible things for my oh-sew basic projects. I like fabric staying put as I sew around. My favorite fusible project? I am glad you asked. (ha ha). I cut out a number from fabric and 2-sided lightweight fusible interfacing or something. Sew onto a t-shirt, and don on the birthday child. I foresee an awesome #5 t-shirt on a very special girl! Quick project and kids love the number shirt!

As for me, not sure I will ever be a quilt girl!

I had fantastic finds at my Jo-Anns 90% off closing sale. And love, love, love the new store that just opened up, with a few good deals as well!