Mark and I spent the weekend on the central coast of California, at our favorite spot. Unbeatable view of the ocean. When it is unbearably hot in the valley, having cool temperatures and overcast skies is simply heaven. 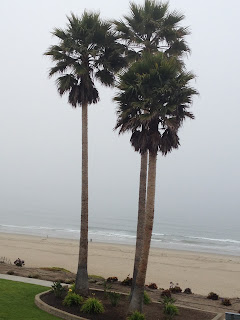 Mark is trying to get in shape for his upcoming season as a football ref, so we walked on the beach quite a bit. Our hotel has beach access, by way of 109 steps. Easy going down, not as easy coming back up. There were shark warnings, and all the surfers moved pretty close to the shore. But even so, we were able to see a group of four to six sharks on both Saturday and Sunday morning. 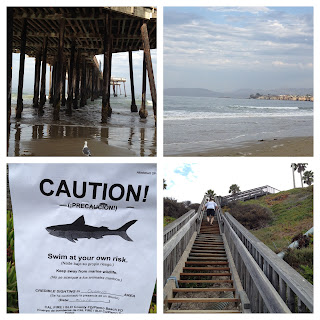 Remember when our neighbor's lawn guy used a riding lawnmower on her postage stamp-sized yard? 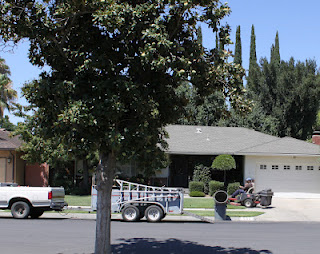 It would have been more appropriate for these guys to have a riding lawnmower... 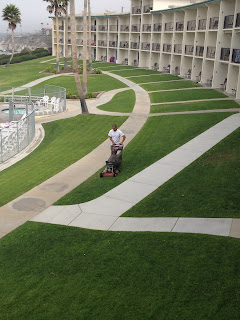 We went to one of our favorite restaurants and just as we sat down, our waitress hesitantly said, "Mark???...." Turns out she used to work at a little lunch place across the street from Mark's office, where he used to have lunch quite often. Even though she has been away from Fresno for about seven years, she still recognized him. 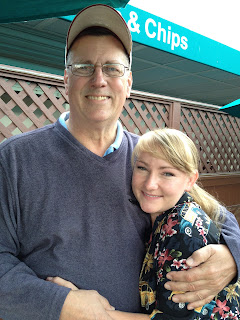 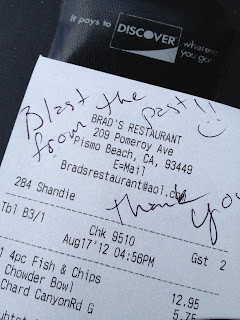 Down the street the Pismo Brewery was having a boobie-que to raise money. 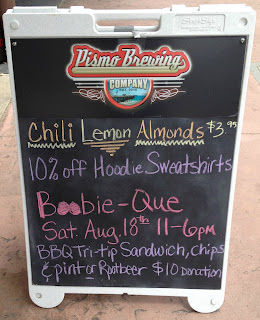 We drove into San Luis Obispo and decided to visit the famous Bubblegum Alley. It's gross. 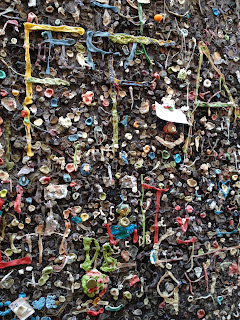 And all that chewed gum smells funny. 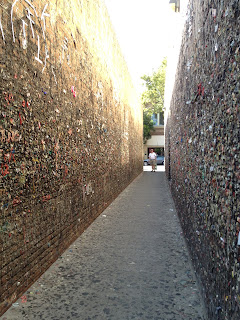 Yet it is a famous, or infamous, landmark. 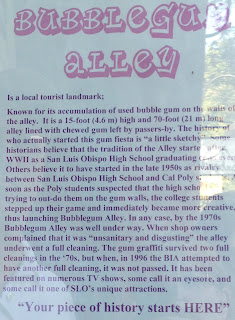 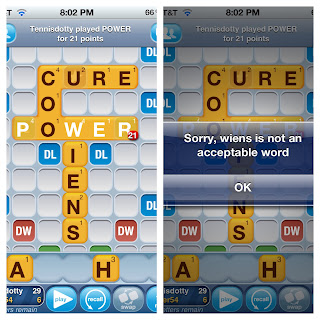 Today is Mark's birthday. And nothing makes him happier than spending time with his family. Happy birthday! And there's nothing random about that! 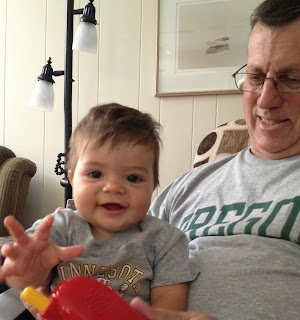 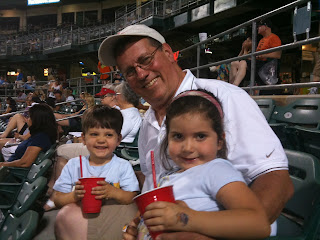 (year-old picture--these two have sure changed in the last year...)
What's been going on with you? Do tell.

I always enjoy seeing how you spent your week Cindy! You always seem to cram so much in! Maybe we can play Words with Friends sometime!

Oh Cindy the beach looks wonderful! I love the beach when it is overcast and cool. I am hoping to get to California this Fall to visit my Uncle. Happy Birthday to Mark! How tall is he? He looks like a giant next to the waitress!!! And the bubble gum alley is truly gross! EEEEEWWWWW.

Morning! I loved seeing your hangout for the weekend....never heard of that bubblegum alley....ack! I wish that you'd showed us a pix of that boobie-que though!!!

Happy Birthday to Mark! What a great day to celebrate.

I always love hearing about your weekend trips to the coast. Would be so nice to spend a weekend on the beach like that.

I'm not sure I could have done Bubblegum Alley! Happy Birthday, Mark!!

Fun reading and Happy Birthday to Mark. A great guy!

It looks like it was a "cool" getaway! Did you see any of the whales? They have been spotted up there this week. It is a gorgeous spot. Isn't that wall gross? It is creepy just smelling it. I don't get art like that.

Happy birthday to Mark. I'll bet he was glad to know that he hadn't changed in 7 years. That is always good for the ego on your birthday! ;-}

Happy Birthday to Mark. Lol at Friends with Words. Eew to the gum alley.

I randomly forgot it was random Thursday *facepalm*

Anywho, happy birthday to Mark, and looks like a fun trip, well, except for that alley - eeeewww!

You did not mention if you and/or company contributed to Bubble Gum Alley?

Happy belated birthday to Mark!!! Glad y'all enjoyed a fun trip. Good luck with the refereeing.

This is awesome! I love that the waitress recognized Mark! It's fantastic. I didn't get a post up on Thursday, because my computer totally crashed and burned. It's fixed now, though.

bubble gum alley LOOKS SO GROSS! (I was a little bit relieved when you wrote how gross it is. phew. you had me scared there for a sec.)

i love that you tried to use your last name on words with friends. i would so do the same kinda thing!

Okey, dokey, I'm caught up on my reading, but my goal is to leave a SLEW of comments for you.

I'm still jealous that you and Mark escaped away for a weekend. Now you are putting ideas in my head. . .