During the week, I keep a post-it note beside my computer and jot down "random" stuff. Otherwise I wouldn't remember anything and would have nothing to post on Thursdays. Sometimes I look at my list and can't figure out what my little "prompt" even means. Please tell me that happens to you sometimes too...

Anyway, thanks to our son and daughter-in-law, we are big fans of the NRP radio show, "Wait, wait, don't tell me..." The show is based out of Chicago, but they were going to film the recording of last week's episode in New York so you could actually watch the show in your local theater before it was edited for airing on the radio. So cool. 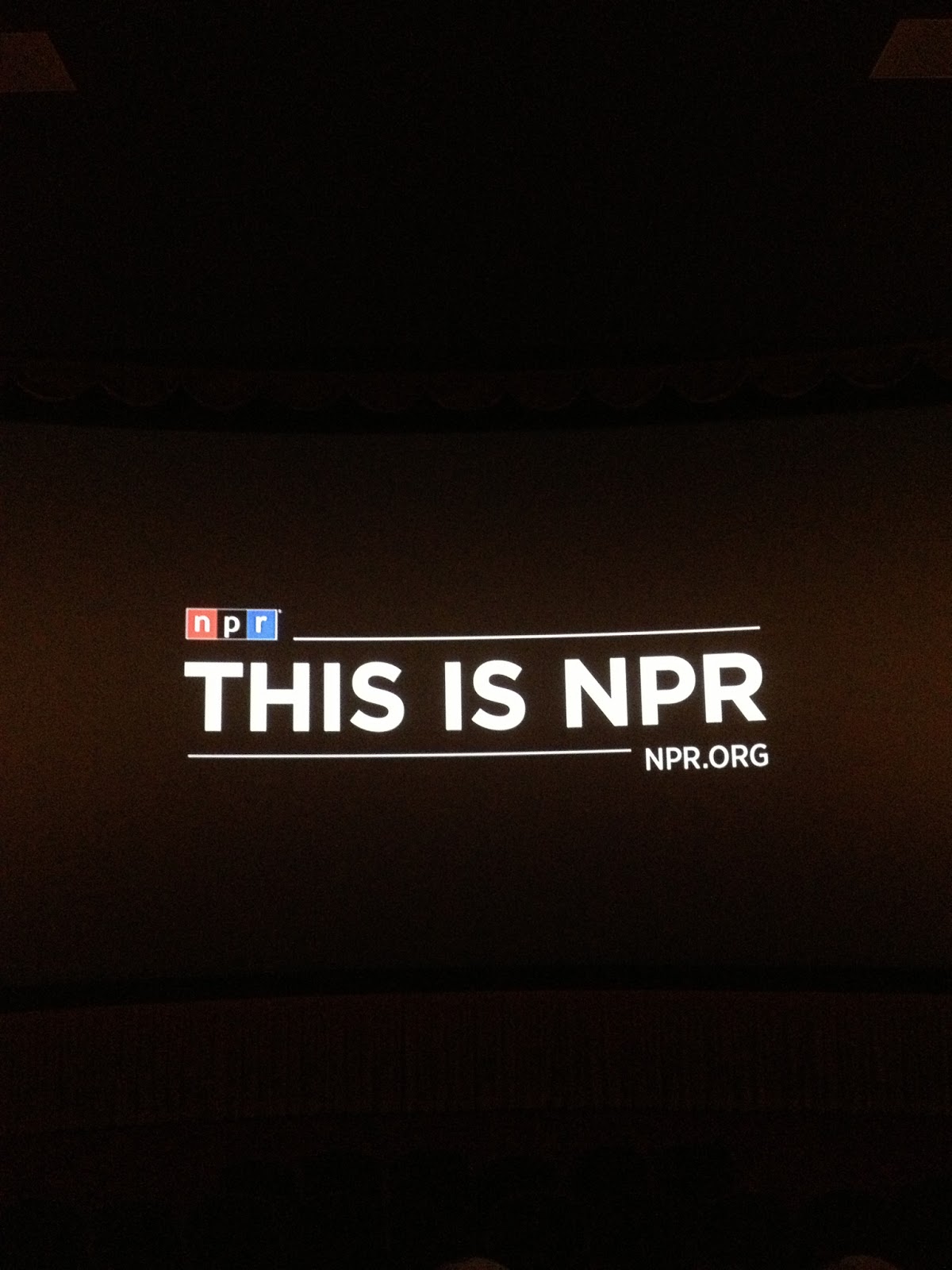 It was nearly as good as being in the radio audience. The show was two hours long, and they had to edit it down to a little under an hour. If you aren't familiar with the show, it's a weekly news trivia show/game show combination. 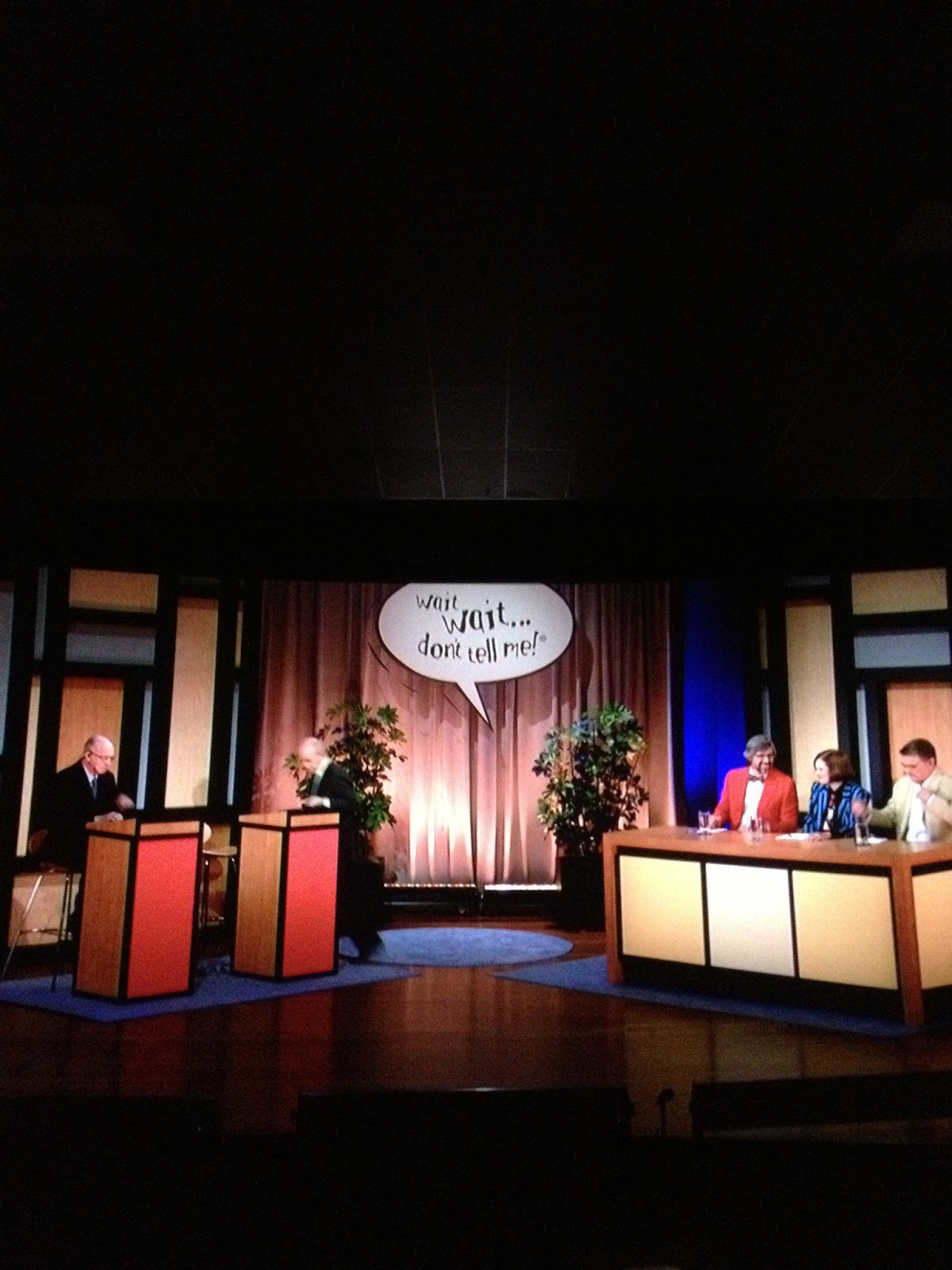 It was lots of fun to "watch" a radio show being taped, so if you are looking for something great to listen to while you are sewing, subscribe to their podcast.

Our friends went to visit their son in Texas, and as they were leaving a restaurant one evening, someone came running over to our friend and handed her a caricature he had drawn while they were eating. How fun. 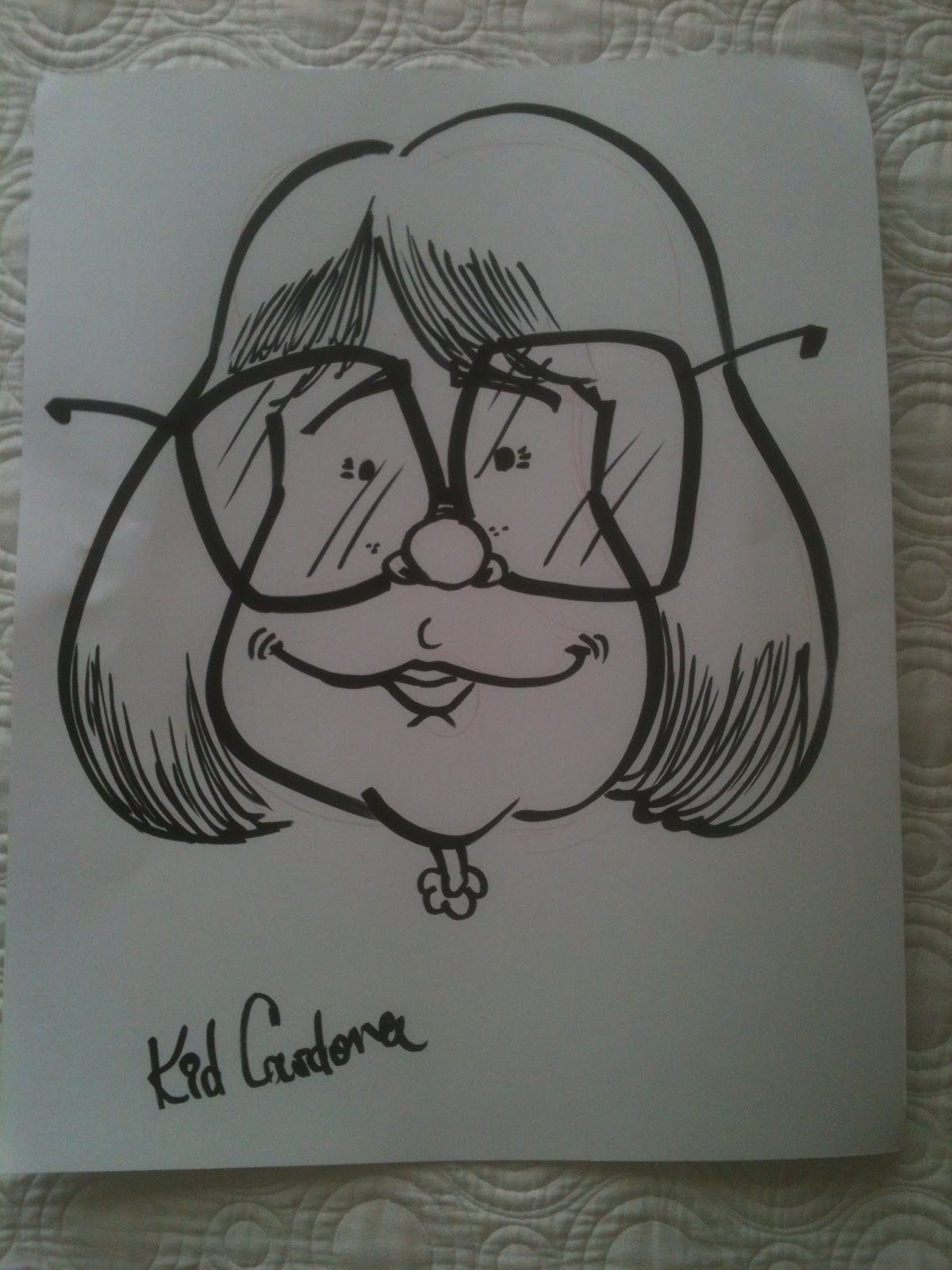 Have you ever heard of Ida Frosk? I learned about her from our daughter-in-law. She is from Norway and has the most amazing food art blog. Seriously amazing. Christa has made that banana airplane with the cottage cheese clouds and the kids love it. You need to check out  her blog AND instagram (@idafrosk) where she just passed 100,000 followers! 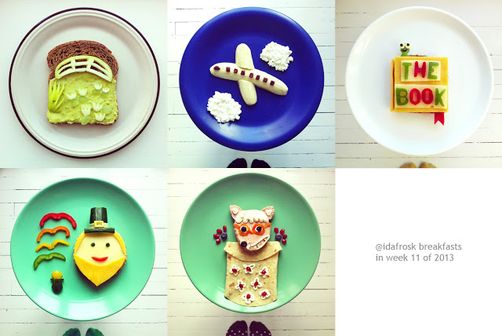 So I love typography. I occasionally download free fonts. I don't use them very often, but it's nice having them anyway. And then I fell hard for a font called Marlowe Escapade. It has a mid-century modern vibe that I just love. It is not free. But I'm already designing something in my head, like maybe a new blog header or something. Can I count this as a business write-off? 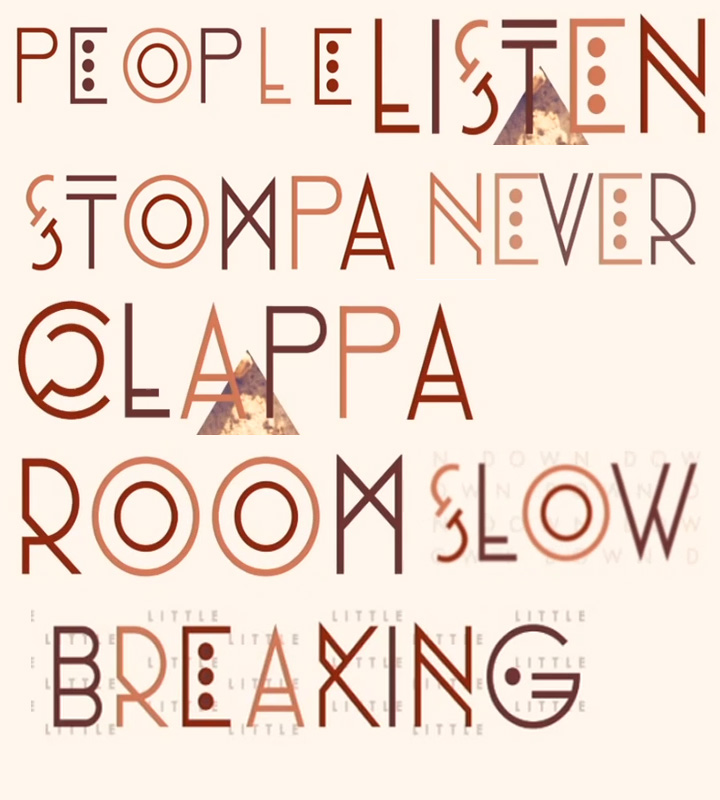 Saturday, our next-door neighbors had a Kentucky Derby party, the second annual. 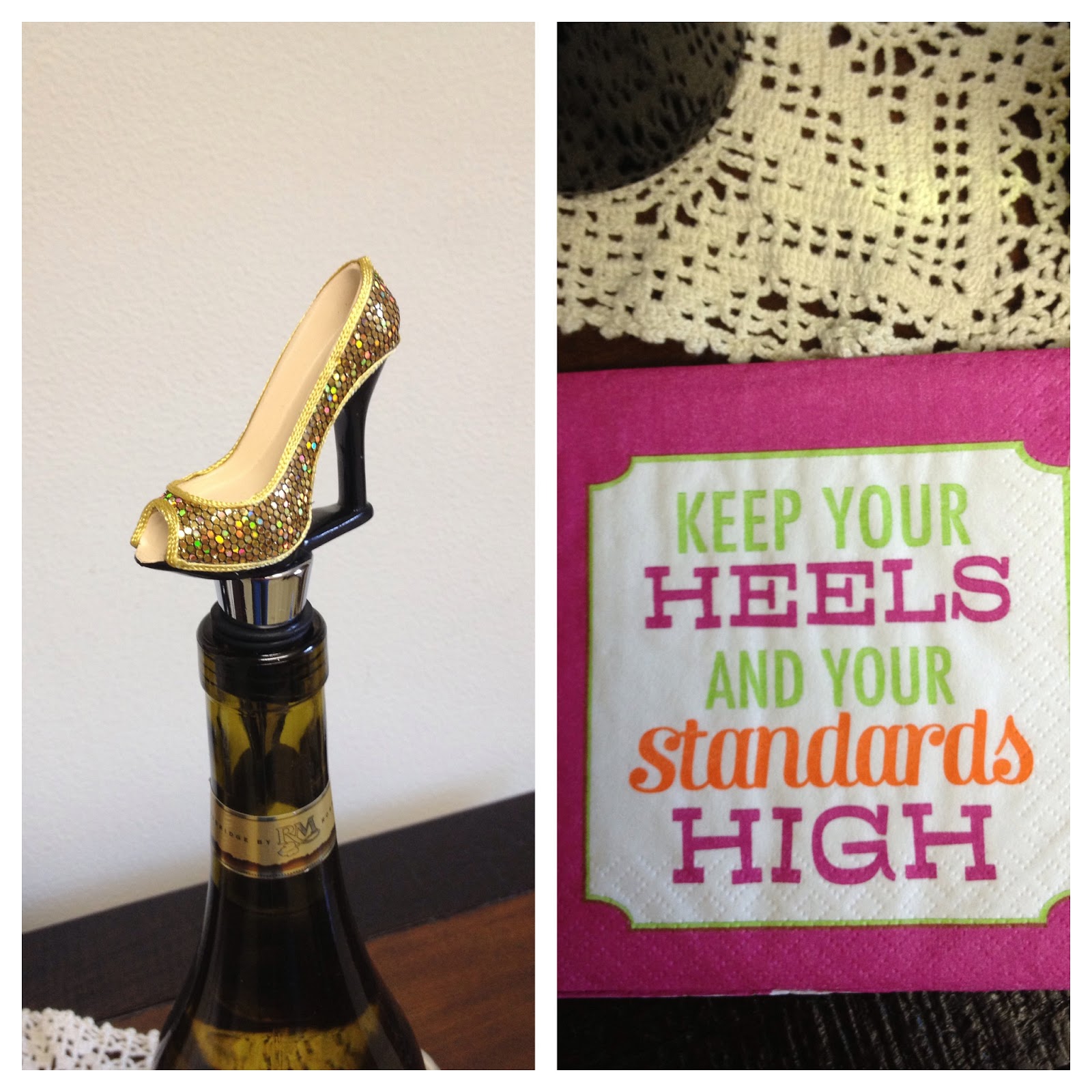 Everyone needs a wine bottle stopper and napkins like these
The women all wore hats. 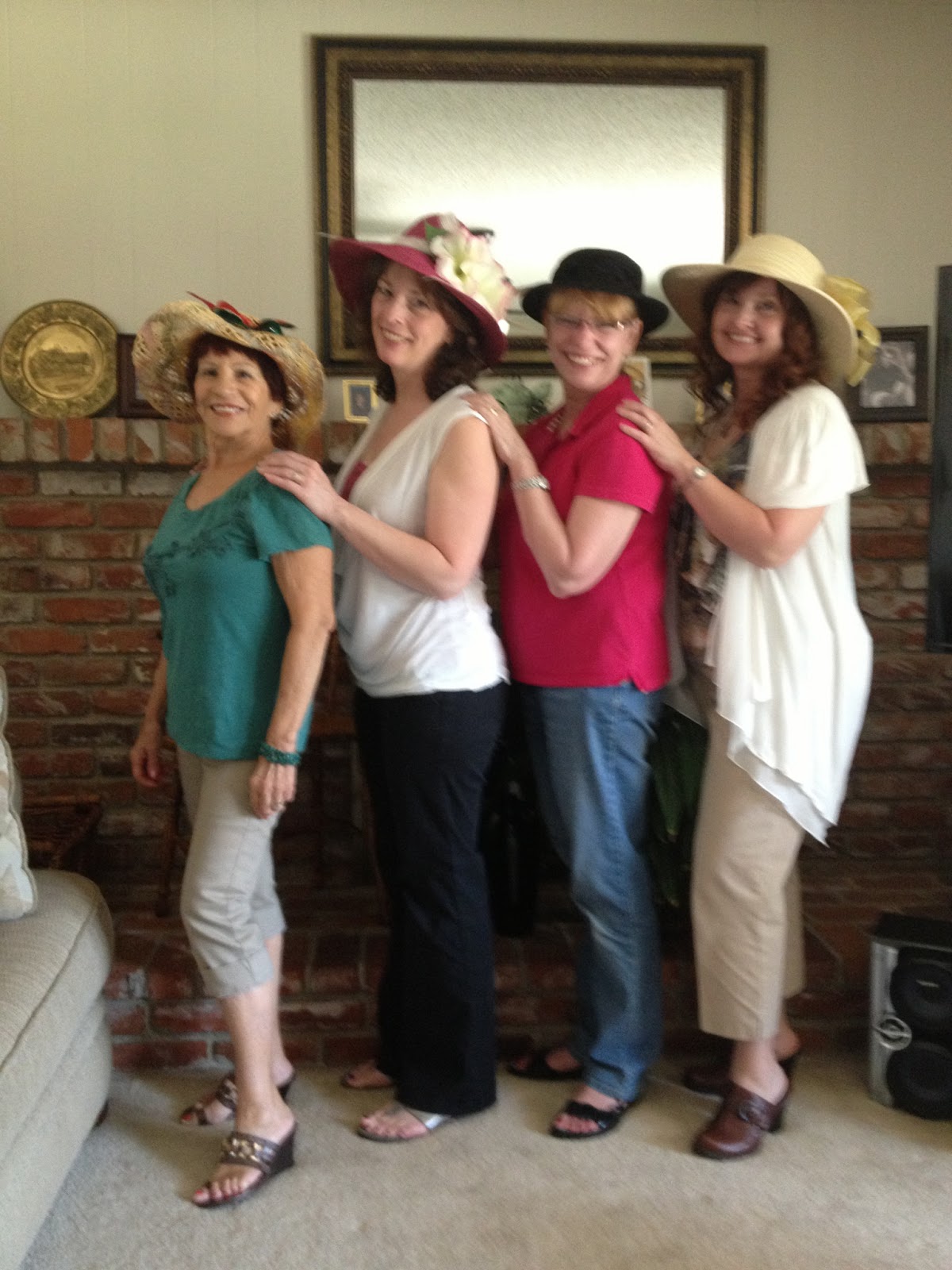 I went with the "run for the roses" theme and even won a vase of red roses. 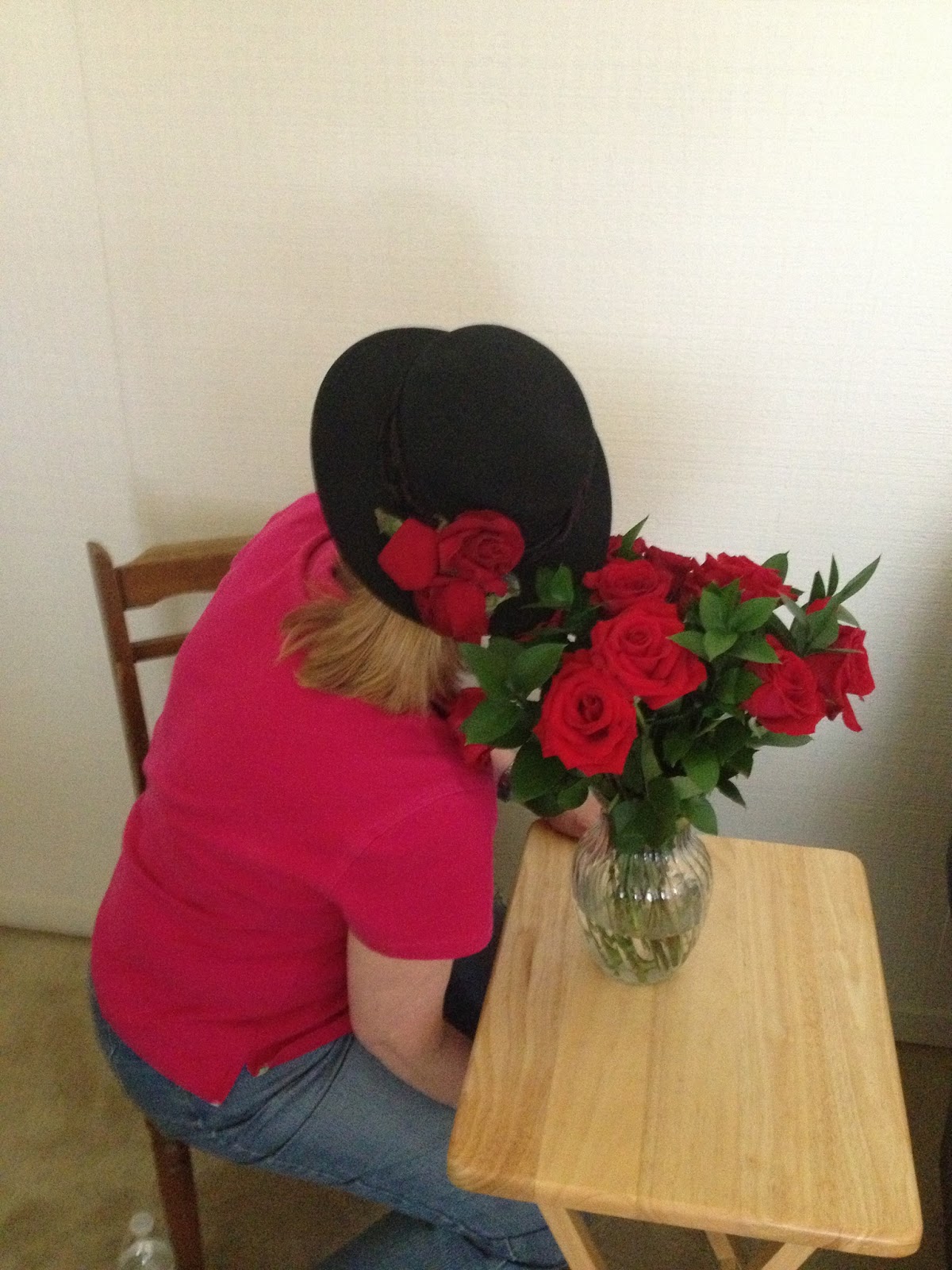 I'll close with a little public service announcement. I was reading a Redbook magazine that I "borrowed" from the doctor's office where I pick up my dictation tapes each morning. 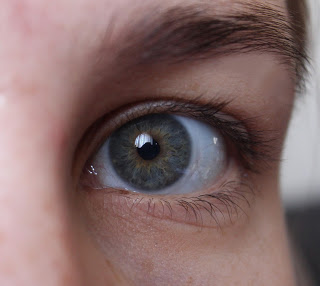 It said that looking at something up close for long periods of time (think computer screen, iPhone, etc.) can lock the visual system into that distance and cause eye trouble. So remember the 20/20/20 rule: "Every 20 minutes, take a 20-second pause from staring at your devices and gaze at a spot 20 feet away." Did you know that? I asked my optometrist son. He said, "Yeah, I tell that to my patients all the time." Who knew?

There is still time to enter the Sew Mama Sew giveaway.

Will have to try that eye tip,thanks!

The roses are a beautiful prize!

Great randomness, Cindy. Where to start....I love typography, too. I LOVE that font! I love things that are sort of Arts and Crafts style. I also love Wait, Wait, Don't Tell Me. Great show! Prairie Home Companion is coming to Michigan for taping. I tried to get tickets and the sold out in the first day. I couldn't get hubby to commit (plus they were hugely expensive), so we are missing out. :-( Yes, I have to write myself notes like that all the time. I have a post-it stuck to my computer right now with a to-do list. I can't figure out what one of the items means. I'll figure it out when I've missed the deadline and someone carps at me about it. And the 20/20/20 rule. Yes, I have heard that. I heard a story about how we all have more eye trouble than folks did in days past. In part it's because we spend so much time staring at screens. The story I heard was that children have more eye trouble now than they used to, because they are staring at TVs and video games and not out playing, where their eyes are having to refocus all the time.

just discovered your blog and your link-up, so I added myself and my new adventure... I have long been a derby fan but have never been to a party to celebrate it -- that would really top off the day no matter who won! Will be back to visit your blog again, many times I am sure...

We listen to Wait Wait often. I love "This American Life", by Ira Glass so much more. It is great story telling about real topics with music, voices of actual people, reading by narrator, and other awesome sounds. The weaving of the stories and the pacing are amazing. Check it out if you are not yet a listener. Happy Mother's Day to you! Love you!!

Great randomness! Thank you for reminding about eyes! Have a lovely weekend! x Teje

Heh, I take random notes during the week too :oD I also had a seriously bad font fetish in the past...

Fun post. We went and saw Says You (a show like WWDTM) when it was being taped for radio at a local university. They actually did two shows--it lasted two hours--and we laughed a lot. I listened to that WWDTM show the other day and it sounded really fun.

Sounds like you have a trunkload of comments for your giveaway--too fun! I missed that with end of semester crazies; it's my mind that's crazy today, not necessarily the grading/prep load.

Always fun to stop by the blog and read your thoughts--
E.

I also don't understand everything on my lists - it comes to me eventually when it's too late! I love trying new fonts - I recently changed my website header and that took about three hours just to choose the right one. Did you know that you can get really dry eyes doing computer/laptop work cos we 'forget to blink' - according to my optician. Enjoyed your blog. xCathy

I have been told that by an optometrist before when I was having a check up. Well not those exact figures but to change focal distance every half hour. Must admit I'm really bad at it though. Just another thing to remember each hour, like my brain isn't full enough?! Ooh, I'm a typography/font lover too. I do enjoy searching the net for new things, never use them but I know they are there if ever do need one. Totally agree with the napkins, unfortunately can't wear heels all that often or for long periods of standing any more. Hubby's happy, it limits the budget expenditure on footwear!

Great tip about the eyes! I tend to zone out/hone in on one thing and totally forget to look away for hours on end….

Ah, how I've missed the randomnes…!

You love typography?! Me too! Me too!
What does it take for a font to be a business right-off? And what does it take to buy it just for the joy of it? There's nothing like owning something that is Just Amazingly Perfectly Right :)