Last week on Instagram, the hashtag #weddingringwednesday made the rounds. I decided to play along. This is my wedding ring. The center diamond is small, about a fifth of a carat I think. When I got engaged, everyone around me seemed to be getting larger diamonds set on tall prongs. I wanted a smaller diamond.  Years down the road I wanted something more substantial. But not a different diamond--by then I was very sentimentally attached to this one. So we added the ring guard. While pretty, those four diamonds are not nearly as sparkly as my lovely original diamond. I still love it. And December 8th will be 41 years since Mark put that engagement ring on my finger. So there are actually times when size doesn't matter. 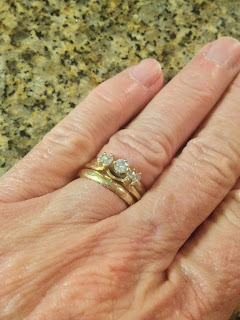 We visited a different church on Sunday because Mark was running the sound for a musical group. Beautiful quilty windows in this sanctuary. I just love the way the sun comes through the stained glass windows. You don't see them very often in newer churches. 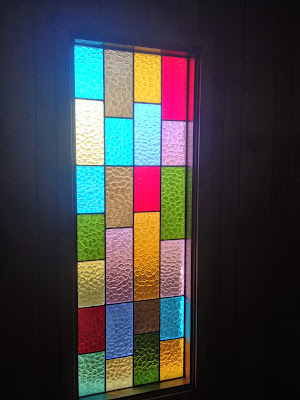 Levi lost his first tooth this week. And I finished the Batman tooth pillow a day late.(Great, very well-written pattern available here. And you have the choice of making Batman or Superman. Plus I ordered the kit, which was very affordable and well put together.) 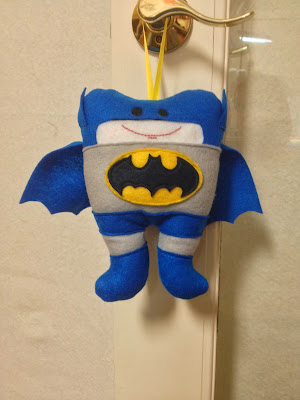 Even though it was a late, he was pretty happy with it. 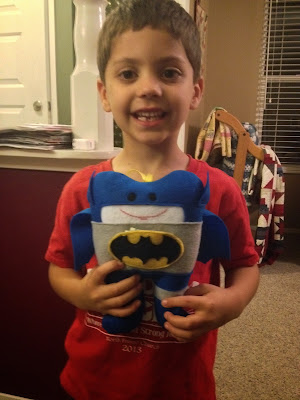 When Mark and I went over to drop off Batman, Aaron and the kids were playing a game called Fibber. I'm not sure how it's played but they all had funny glasses and increasingly larger noses. 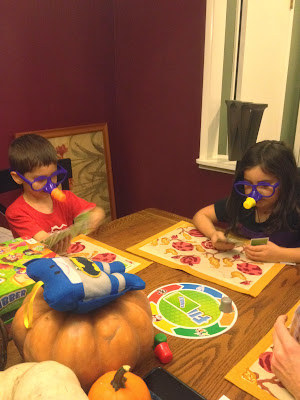 Even Gabe tried to get in on the fun. 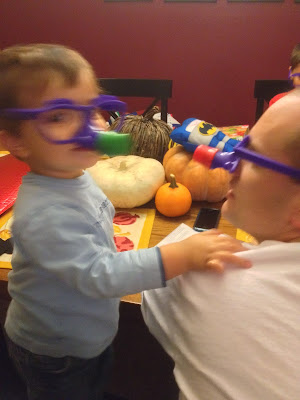 While scrolling through Facebook the other day, I noticed this post from Pat Sloan (so naturally, being excited that Pat Sloan liked something I made, I turned around and put it on Instagram), linking back to the Selvage Blog, where, unbeknownst to me, my selvage Christmas tree tutorial was posted (with all the proper links back to me, so that was nice, but it would have been fun to know about it). 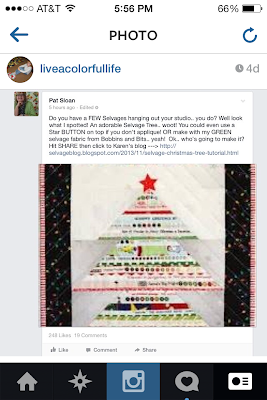 If you want to make your own selvage Christmas tree, here is the tutorial(from last year).

This mug and ginormous button arrived the other day. The button is so large that there is actually a cardboard easel type thing on the back so you can put it on a shelf. 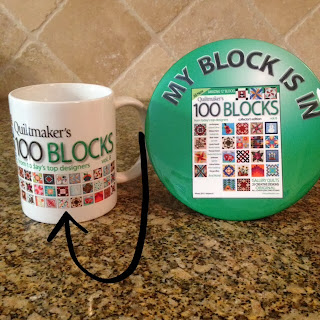 And speaking of Quiltmaker's 100 Blocks, Carla is the winner of a copy of the magazine. I was so surprised that out of 230-some comments, the winner would be my partner in the X and + block swap, but that's who the Random Number Generator chose. So who am I to argue?

A little technology before bedtime. 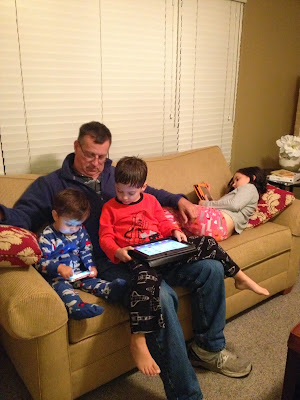 And yesterday morning I was packaging a little fat quarter to send to my friend, Doris. Where did this thread come from on my packing tape?? I tried to pull it off, and then decided Doris would find the humor in having thread stuck to the tape so I just left it alone. 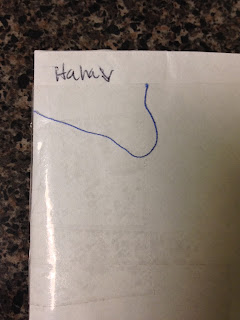 Never played Fibber either but it certainly looks like fun :)

Congrats on all the fame that has been heading your way recently too!

Well Happy (early) Anniversary to you and your love!

Such a cute little tooth pillow!

Very fun. And what an interesting game your kids were playing. hmmm. Nice to see your little feature - I ran into one today too. Always nice even when it's a surprise.

41 years....congratulations! I love your little tooth fairy pillow. That is perfect for a little guy.

That Fibber game looks too cute. I'll have to check it out.

Happy Anniversary! I love your selvage tree, nice to see it get all the lovely attention.

Love that thread in the tape. So common around my house too. :) Great selvedge Christmas tree! It'd make such a festive sewing room Christmas decoration!

Hey Cindy . . . you must have been 10 when you got married!! Happy Anniversary in advance to you both. Don't know what the nose game is either but it sure looks cute or maybe it's just the cuties that are playing. Enjoy those grandkids.

Let Karen know you would like to be asked before she posts your stuff on her blog. I've had the same experience....

Woo Hoo….LOVE your selvage Christmas Tree. Thanks for sharing the tutorial on it. Having done some tutorials myself I know the time and effort it takes to do one and I ALWAYS appreciate it when a quilty friend shares them for free!!

Another fun week round your way :o) Love Batman!

Love the selvage tree! Thanks for sharing. And Happy Anniversary! And many more!

I hope I have a marriage as strong as yours! I think we both hit gold with our Marks :)
We didn't get engaged but we bought our wedding rings together in Paris and I adore mine. Very cute tooth pillow and they'll be plenty more chances to use it! That thread made me giggle!

Congrats on 41 years! Wonderful! My wedding ring broke so I wear nothing : )
So fun to win the magazine. Thanks so much Mr. Random. Love the sticky thread.

Your posts always makes me smile! Hey kinda "random" LOL...but my daughter gave me her big dot hostess gift of the 31 cosmetic bag and it makes for the perfect travel sewing tote!!! :)V

Fun to see your wedding ring up close with the story behind it. What a clever name for the game, fibber, with those glasses. My random thought for the day: we had scrambled eggs and sausage for dinner tonight.

Happy Anniversary on the 8th! That's also my mother's birthday so I suppose lots of nice things must have happened that day. :-)

Looks like a pretty great week to me! Congrats on all your wonderful years of marriage, fun toys and big noses. It is all fantastic!

That thread cracks me up. Seriously, I love how you find humor in all things.

Congrats on the Pat Sloan connection. She must have been busy this week, as she popped in on my blog and commented on my Santa. There's no one in this house who knows how fun that is, so I'm thrilled to share it with YOU. And congrats on being the 100 blocks gang. You are really talented!

I love that Batman pillow--you are such a good grandma. And a good friend :)