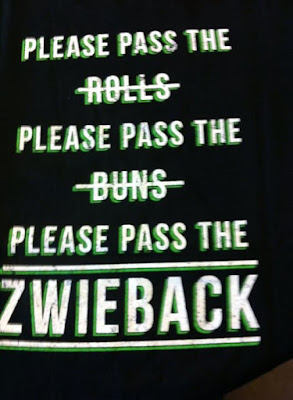 Image from West Coast MCC Sale FB page
In last week's edition of Really Random Thursday, I posted a picture of my granddaughter teaching her classmates how to make zwieback. 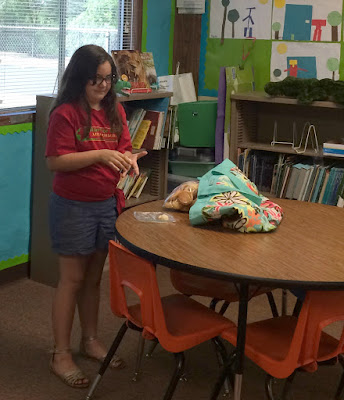 I received an interesting comment by Anna (a no-reply commenter) who in essence said that while the rolls looked yummy, she doubted very much that they were zwieback as they looked more like brioche, and that zwieback were similar to old, dried toast, usually eaten when you have an upset stomach.

I remember seeing packages of "zwieback" on the grocery store shelves and being very confused myself, because the picture on the package did not look anything like the zwieback I was familiar with!

Then when my good friend, Elizabeth (a fabulous cook--and I know this from experience), also expressed confusion, as the word conjured up images of the same hard, dried piece of toast often used as a teething biscuit, I knew it was time for a little clarity.

I come from a Russian German background, my grandparents on my father's side having migrated from Russia to the Midwest and finally to California. With that background comes a lot of really good food. Nothing I would consider gourmet, but rather food that kept our ancestors full as they worked very hard. 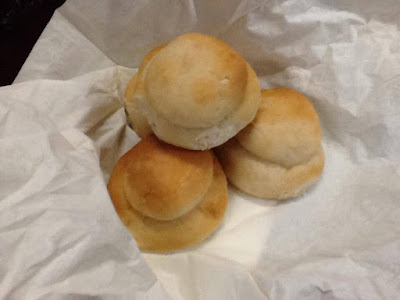 I can't remember a time when I didn't eat zwieback. Every culture has food like this, right? Food that you have grown up with and maybe assume everyone knows what you are talking about.

Zwieback, in my life at least, are double-decker rolls, best eaten warm, especially good when you pull off the top, add some butter and fresh strawberry jam, put the top back on and let the butter melt.

My grandmothers both made zwieback. My mother-in-law was an excellent cook and loved to entertain. A few years before she passed away, there was an article about her cooking in one of the local newspapers. Look, here she is with a plate of her famous zwieback. 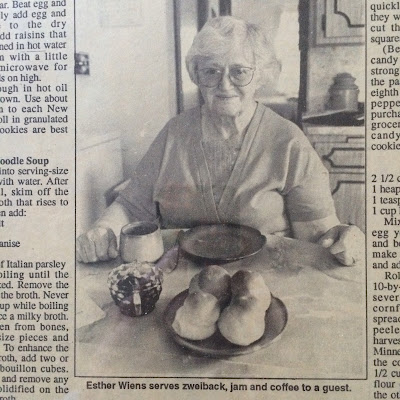 Zwieback were often served at Sunday "faspa," a "low German"--kind of a German slang--word for a a late afternoon lunch. I'm sure there are still a lot of older generations that serve it, and it usually consists of zwieback, butter, jam, cheese, sliced meat--ham or bologna--and fruit, and coffee. I remember that in my grandparents' homes, it was served to relatives or friends who often dropped by unannounced. But they were always prepared.


When both Anna and Elizabeth mentioned the similarity to the French brioche, I pulled up a recipe to compare. I found that the dough is very different. Brioche dough is very egg rich and also baked with an egg glaze, and while I found a couple of zwieback recipes that called for eggs, they were usually listed as "optional."

Naturally, while there is at least one recipe in every Mennonite church cookbook I have, they are all just a little bit different from each other. 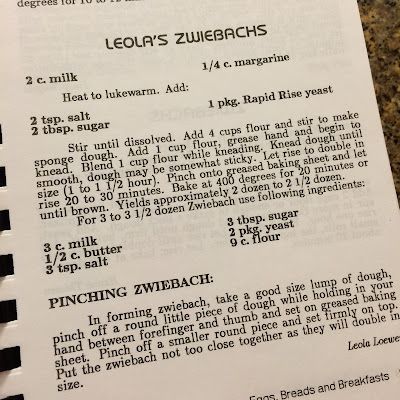 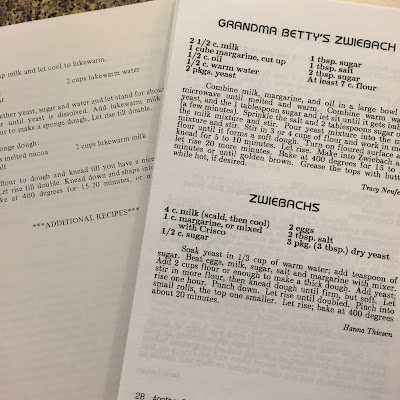 Zwieback technically means "twice baked," which I  find interesting, as you only bake them once. Actually I always thought it meant "two buns."  I pulled out a great source of Mennonite cooking, Mennonite Girls Can Cook. These women from Canada have attained somewhat of a celebrity status--you can check out their blog here (highly recommended--there are some really good recipes there). 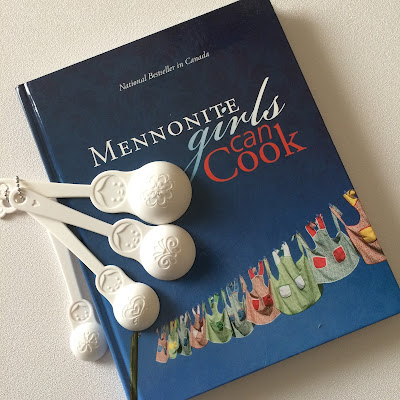 This book is filled with familiar recipes, along with some definitions, 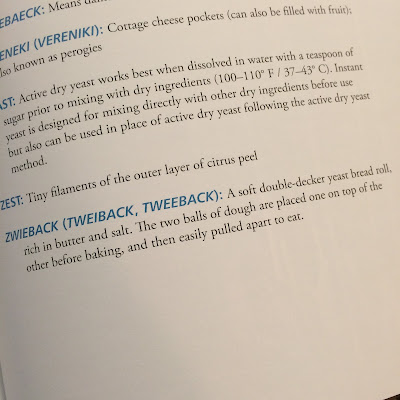 a recipe (the blog recipe is here, along with a yummy picture) 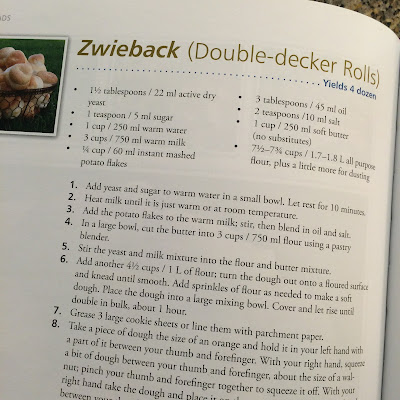 and pictures. Yum. What I can tell you is that learning to roll the dough in a ball, then pinch off a smaller piece to set on the larger piece, and not have it tip over while it is baking, is a skill that is learned with practice. My husband, Mark, learned from one of the best--his mother. He doesn't make them as often anymore, but I'm thrilled to know that our granddaughter is already a skilled zwieback maker. And so the tradition is passed on to another generation. 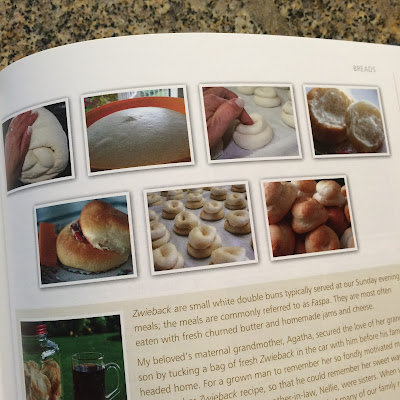 Every year at the West Coast Relief Sale, zwieback dough is made ahead of time, then baked on site and sold--countless dozens--a great number of which never make it home. And you can also buy homemade jam. There is hardly anything better than warm zwieback and fresh jam. All the supplies have been donated, so all the proceeds go to Third World relief. Win-win. 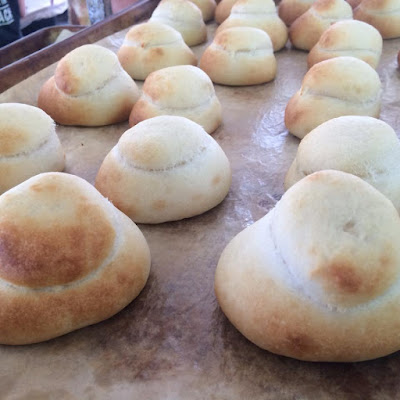 Image from West Coast MCC Sale FB page
So, Anna, if you are reading, and Elizabeth, I hope this gives you a little glimpse into the zwieback I have grown up eating. I also hope you will have a chance to taste some for yourself someday. I can guarantee they won't be hard and crunchy. :)
Posted by Live a Colorful Life at 6/10/2015

Love your explanation, but any person that cooks has probably experienced the same name blessing very different foods. The name may have lead to the dry toast explanation, but it is obvious that your style is very traditional and like my mother-in-laws recipes may not live up to the American translation, but sure taste great and bring back a lot of sensory memories.

I have never heard of these type of rolls here in KC. I need to get out more! Since I've never met a yeast laden product that I didn't adore, I'm sure I could eat a basket of these all by myself!! Now, I'm wondering about the same-named teethers....I'll have to google it, I guess!

Our Zwieback in Germany is hard and crunchy and indeed baked twice ;-)
Normally you buy it, I don't know anyone who makes it . And in our household it was only used for sick ones, because it's easy digested :-)

What a wonderful glimpse in to the past, and present! Your Zwieback buns look delicious! I've never had a double decker bun before. I love how recipies change over time, from house to home. They had to adapt to peoples lives and what was availaible to them at the time.

I make a bun that is similar in looks (not double), that my Grama and Great Grama made. We call it Three Day Buns. Not sure why, but I think its because you mix the yeast and flour the night before, in the morning you mix more ingred., let it rise twice and bake. By the third day...they were so delicious we ate them all!

Thank you for sharing, so fun to read!

I love this post....Great glimpse into historical culture and no better way to pass culture to your next generation than through a great family recipe. Food! Yeast bread, yum!

Those look much tastier than those hard little teething toasts!!! Great post.

I certainly learned something new today. These sound delicious and your little family history of them is very heart warming. Now get me some zwieback

Are you willing to share your recipe for zwieback with this wife of a German-Russian descendent? They look fabulous! So much better then the teething crackers I know by the same name!

Great post Cindy and well written. It does make me miss my Mom and her cooking, she would make them on Saturday and when out of the oven she would cover them with a towel and tell he 4 boys not to eat them. When she finished baking she always took a nap and when she got up she look under the towel and say "I'm pretty sure I made more than what I see" but never said anything. We thought we got away but when we were older she told us she knew that she was missing a dozen or so. Cindy who knows in a year or two when I have more time we will have more zwiebach

Loved reading this post- I learnt lots because these are totally new to me! Here in Australia those hard teething biscuits are called 'rusks'! I've just 'googled' it and guess what- the zwieback is mentioned there! Interesting and confusing at the same time!

This was such an informative post. I, too, thought Zwiebach were hard, toast like bread so I am enlightened. Besides that, they look yummy and I am going to make some this weekend using the "Leola" recipe (I have an aunt by that name!) I am dutch heritage and should have known about Zwiebach. Thanks again for the clarification.

YUMMY! So glad you wrote this post to give me what-for in the zwiebach department. Kidding. But now you owe me the recipe. And I'll look forward to eating them in April!
Elizabeth