First of all, let me begin with the confession that I have not even started Part 6. However, it is very similar to the bottom of Parts 1 through 4. When I volunteered to host Part 6, it seemed so far in the future. Note to self: things are closer than they appear. 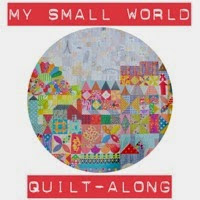 With that said, it doesn't mean I haven't been working on My Small World, this fabulous pattern by Jen Kingwell. I'm hoping that my procrastination has worked to my advantage, although as I'm about midway through the project, I'm not quite sure. It could be epic. It could be an epic fail. One thing for sure: it is busy. There is a LOT going on in this quilt.

My thought process took a bit of a journey as I contemplated different ideas. I had seen a night sky which was amazing. But I didn't want the whole quilt to have a night sky.

Disneyland is a very special place to our family--fairly frequent visits and lots of good memories. And with the title, My Small World, my mind wandered to the ride, It's a Small World, where the song never gets out of your brain once it lodges itself there, and then to the thought of making a Disneyland version, and then further to A Day at Disney, from sunrise to nighttime. There may be just too much going on in this quilt for some of you, but it will become an I Spy quilt for my grandchildren so I'm having fun adding lots of special surprises. 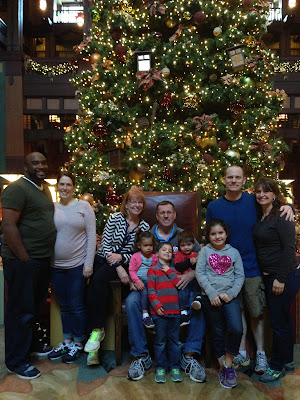 January 2014
I began with completing the whole sky as I wanted to know if sun up to sun down would even work, and it needed to transition smoothly from section to section without any abrupt changes. After spending several days cutting lots of tiny pieces and sewing them together, I realized I had left out one whole section. Lots of seam ripping and more cutting ensued. A good hint for the sky in Part 5 is to cut larger pieces that will be hidden by the dresden portion and the hexies. No need to be sewing 1" pieces together for something that will be covered up! 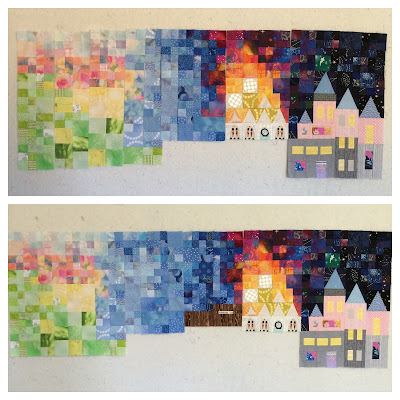 Top picture has a section of blue sky missing, corrected in bottom picture
Next up was Sleeping Beauty's Castle. 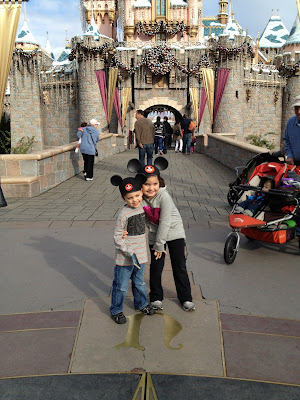 January 2013
The bottom portion of the castle is grey, then there are pink turrets with pointy roofs of blue. I altered the pattern and paper pieced the blue triangles. 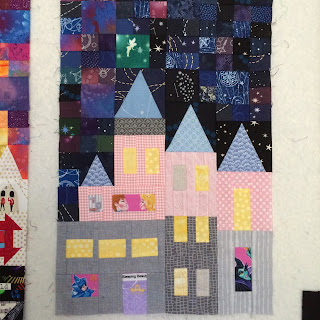 Can you see Sleeping Beauty and her Prince in the window? And Malificent down in the corner--it kind of looks like she is in a dungeon. There is also a selvage that says Sleeping Beauty above the lavender door.

I moved on to It's a Small World. 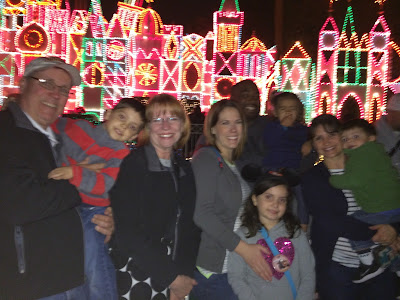 January 2014
Most of the outside portion of the ride is white with gold highlights, so it was fun to use some glitzy fabric. Every 15 minutes, the clock tower opens to a parade of figures. These little British soldiers were the perfect size, as was the little clock. 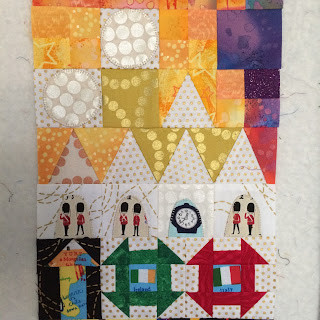 I had a world map panel by Jill McDonald from her What a World line (no longer available). It was perfect and I chopped it to pieces. (Note: If you have one of these for sale, please contact me!) 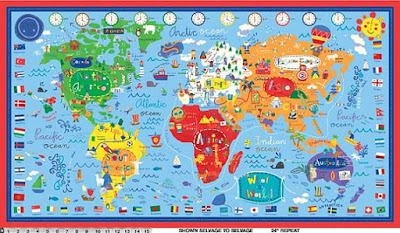 In the little churn dash blocks above, I included the flag of a place I have been (Italy) and a place I've always wanted to visit (Ireland).

Here is the rest of Part 2. (These skinny panels are really hard to photograph). 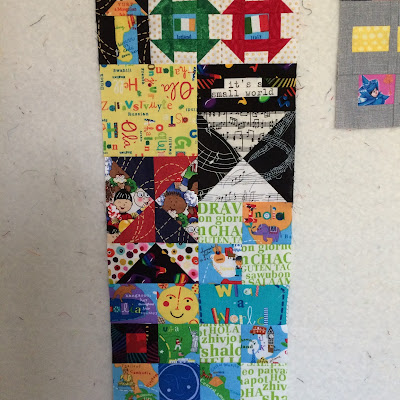 With a stroke of good fortune, I remembered the Quirky Idioms fabric I had purchased from Berene Campbell. Perfect, right? And the music fabric is a reminder about that pesky song that won't go away. 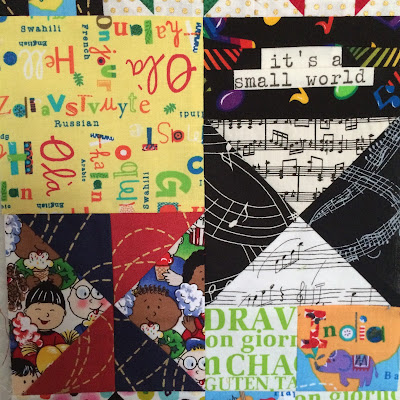 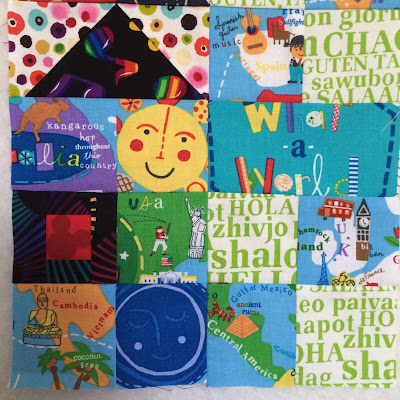 Let's move on to Adventureland. 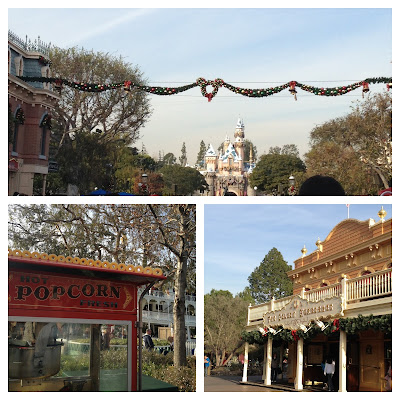 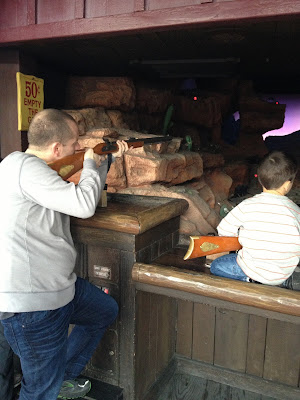 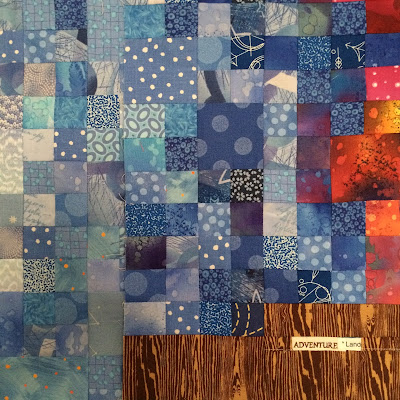 There is one little piece of fabric that has made it into this quilt. I have been protecting for years--it came to me through a hexie exchange years ago from a person in Portugal. It has always been a favorite of mine, as well as my two grandsons. Finally it will live on in Adventureland. Because who doesn't love a pirate monkey?! This is the Pirates of the Caribbean section and that little monkey just makes me so happy. 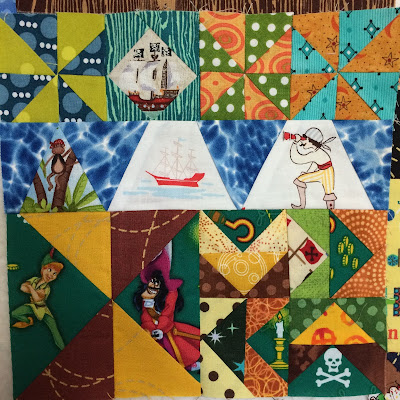 Next is the Jungle Cruise. I had very little fabric that worked for this part but it wasn't a very large section. 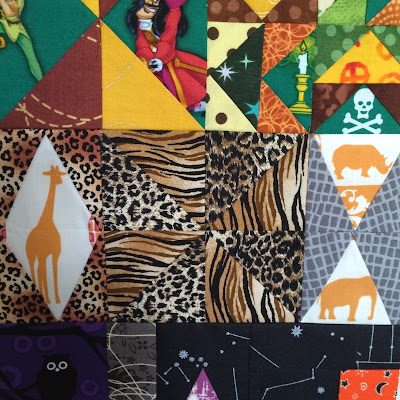 And last up in Part 3 is the Haunted Mansion. My biggest tip for making this quilt is to get the templates that Sarah Bailey from Sew What Sherlock has put together. They have been invaluable timesavers. They are free if you send her a picture proving that you have the pattern. Also, Kerry has an extensive list of tips and shortcuts for each section, along with a lot of links to further tips and shortcuts. 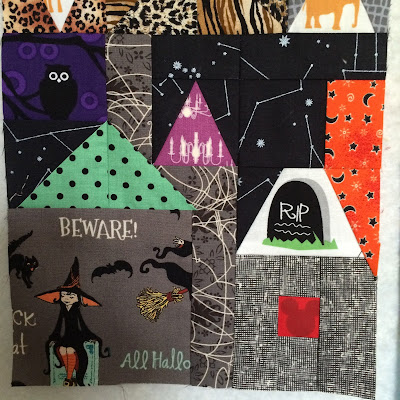 I'm also including "hidden Mickeys" in each section. 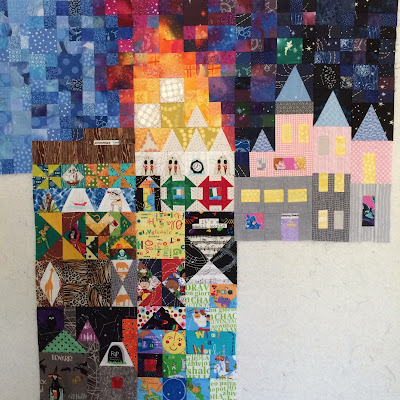 Thanks for joining me on this half-completed tour of Disney. Next up is Fantasyland/Tomorrowland, and then I'll start on Main Street.

Want to know what Mark's favorite ride is? Here's a hint. 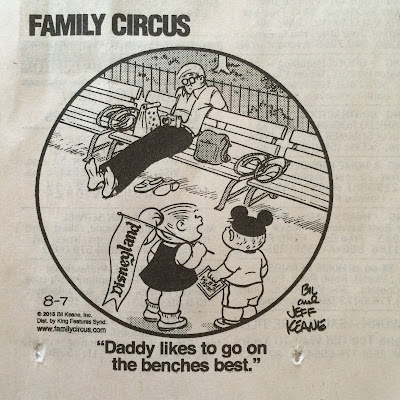 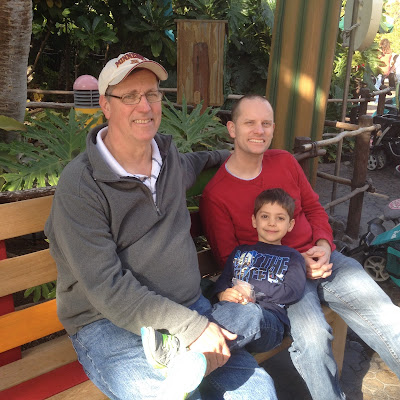 January 2014
And while Disneyland is touted as the Happiest Place on Earth, at some point nearly everyone is ready to go home and take a nap. 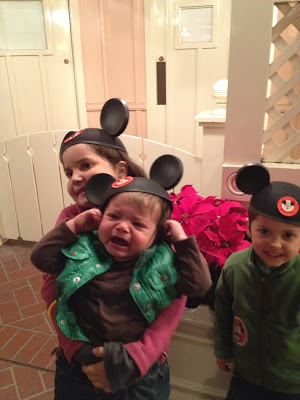 Email ThisBlogThis!Share to TwitterShare to FacebookShare to Pinterest
Labels: my small world quilt-along

Your small world quilt is coming on great :-)

Amazing CIndy, so much to spy!

Love this post and I love what you're doing with the project. It's going to be beautiful!

Disneyland IS busy, so your Small World quilt is perfectly appropriate! I love all the little references to rides and characters, all those favorite bits. What a treat!

Wonderful, so much to look at! You have out a lot of thought into this, I just love the castle, and the pirate monkey, and - all of it!

Wow, this is so special. I have the pattern but have not started yet. I may have to have a theme also. Thanks for the ideas!

Amazing! Just love what you've done with this pattern.

I can't believe the amount of work! Every piece is so thought out. Your grand kids will treasure this for sure ; )

You have put so much thought into this, it will surely become a favourite amongst the Small World quilts out there Cindy! It's absolutely fabulous!!!!!

This is so happy quilt!

After seeing all the wonderful pictures of your family interspersed between the photos of quilt sections, it is obvious this is no small world. This quilt is so much more! Really enjoy seeing your progress on instagram... But loved reading about what each section and fabric selection means to you!

I love your version of this quilt. This will be a treasure for sure! I use to have that map panel but made that one up and donated it. What a fun way to use it in your quilt.

Your quilt is gorgeous! I love the Disney theme! I need to finish the last few rainbows and petals for mine. I do have a panel of the map as well as a few coordinating fabrics. If you're still interested in it, let me know courtlyons@gmail.com

That is going to be incredible! I love all of the great detail.

really love the changing sky - it works well !! and love that this little quilt has so much meaning - all those fussy cut pieces are awesome !

What a fun version of this quilt!

Amazing! I love it and the idea of a day at Disneyland or Disney World. Thanks for sharing.

I just picked up that panel from fields fabrics in holland mi. They're super nice...you could give them a call and see if they still have it and if they could send it to you. (If they won't send it, I would be happy to pick it up and send it. I don't have any plans to go there soon, but it is about one minute off my commute so I could easily grab it.)

What a talent you have to see the idea made into blocks of fabric!

I can see why this quilt is epic. So many little tiny pieces! I love that you are making it into an I spy in a way for the grandkids because of the connection to Disneyland trips with the family. It gives it so much meaning. Love all the family pics too.

Wow! Absolutely love what you've done so far, the characters are awesome! Can't wait to see it finished :)

So, here I sit at my computer peering and squinting at each section searching for Hidden Mickeys!! :) How Fun!!!