Welcome to another episode of Really Random Thursday. I'm having a hard time wrapping my head around the fact that it is nearly the middle of May.

Last Friday, Mark had to umpire softball in the mountain community of Oakhurst, about an hour away from us, on the way to Yosemite National Park. After all the time he has spent working so hard to facilitate my parents' move to assisted living, we decided to spend the entire weekend there for a little R&R.

He dropped me off at the quilt shop in Oakhurst, where my friend, Jullie, picked me up and we spent a wonderful afternoon together. 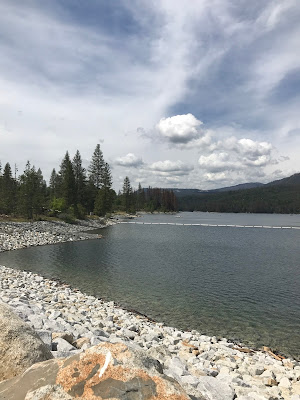 We had planned to sew at her house, but when we got to her house, I admired the irises in her front yard. 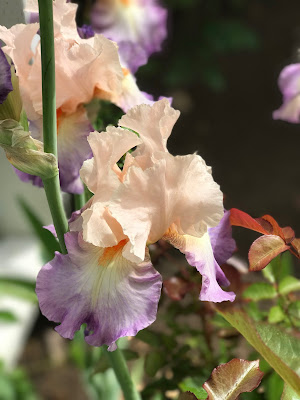 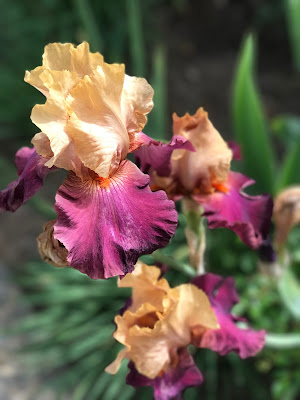 She said friends of hers grow irises, and in fact, the last weekend of April each year they have an iris sale. So we drove to their house so I could admire their irises as well. Also, let me add here that the "portrait" mode on the iPhone 7 Plus is amazing. I love how it blurs the background of these pictures while keeping the flowers in sharp focus. 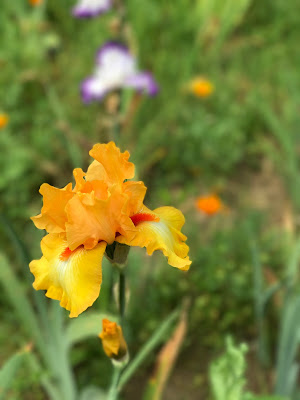 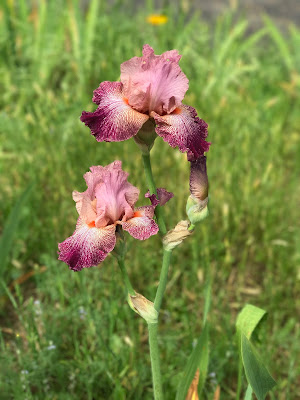 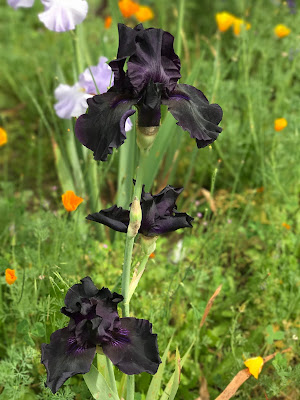 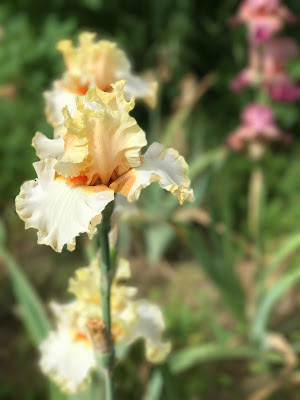 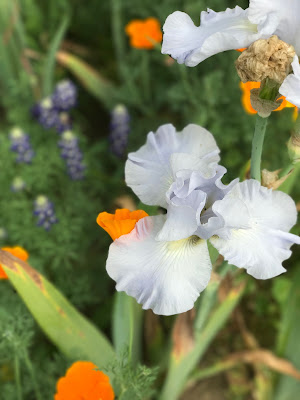 In one of those "isn't it a small world" things, Jullie stopped to fill up her car, and while I waited, I happened to notice the car in front of us was from Kansas, where Mark and I went to college and then spent the first five years of our marriage. As I was pondering where in Kansas this car might be from, I noticed the little dealer sticker: 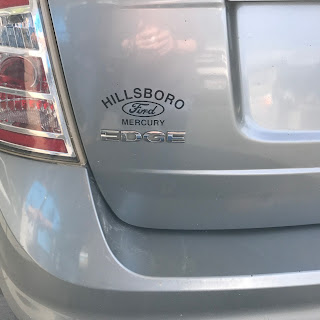 Hillsboro?? That is the small town where Mark and I attended Tabor College and met each other! And when I say "small," I mean the population is less than 3,000 people! So I waited for the owners to come back to their car and introduced myself. Of course, it wasn't anyone I knew, but we knew people in common. Small world indeed.

Jullie and I drove back to Bass Lake and had an early dinner at Ducey's Lodge. After too many years of seeing hardly any water in the lake, it is wonderful to see it full again. 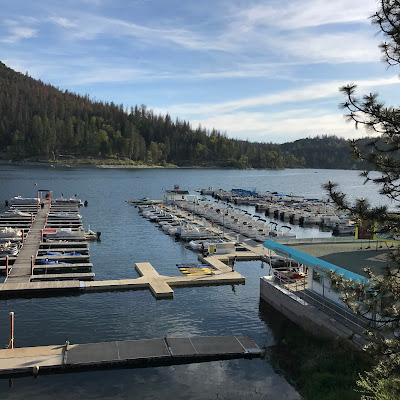 This was the view from our hotel room. The weekend was mostly overcast, and we thoroughly enjoyed it. We drove around in the foothills and just generally relaxed. 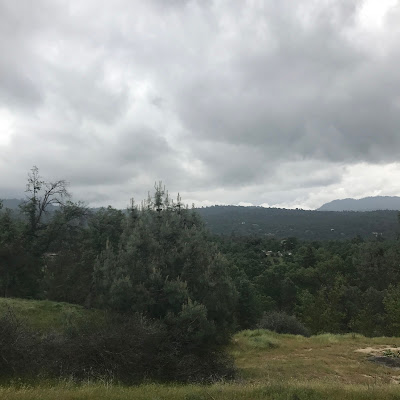 Saturday night, we knew our friend Marilyn was at her cabin in Bass Lake, and she joined us to dinner. 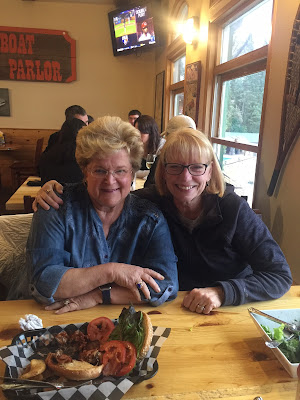 Our quilting group stayed at her cabin during the quilting retreat at the beginning of March. I left early because of the threat of heavy snow during the last night. Here is a comparison of that Sunday morning in March, and what it looks like at her place now. 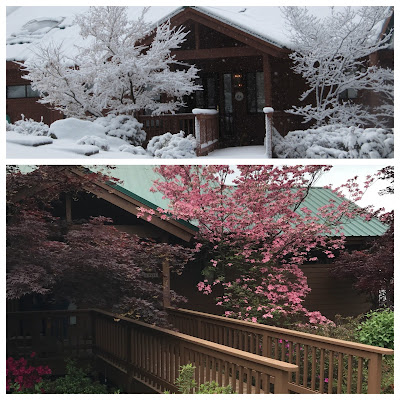 Late Sunday afternoon, Mark and I drove to Tenaya Lodge, close to the park entrance for Yosemite, and had dinner. 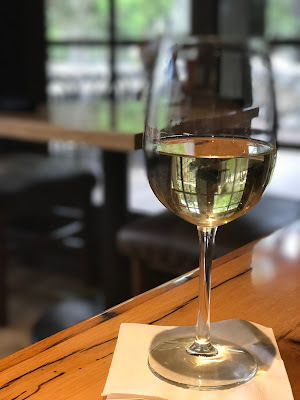 And then it was back to Fresno Monday morning.

Yesterday was Christa's birthday. A couple of months ago, she mentioned that for some reason, she had no desire to go to Mt. Rushmore. So when I found this birthday card at Target, it was too good to pass up. Just in case you were wondering... 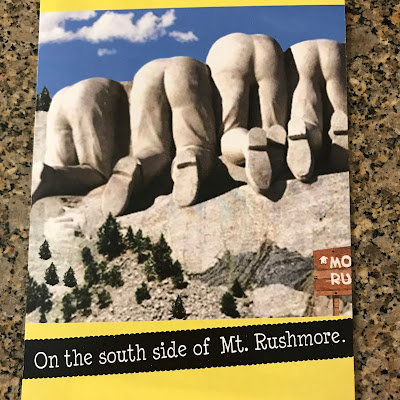 This week has involved post season baseball games for Levi, as well as school concerts. Charlotte and Levi are both in the orchestra at their grade school. Their orchestra teacher is amazing--they are playing high school level music! 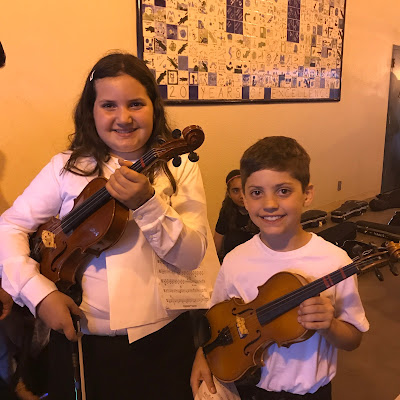 It's hard to get good pictures in a school cafeteria, but Mark was able to focus on Charlotte. 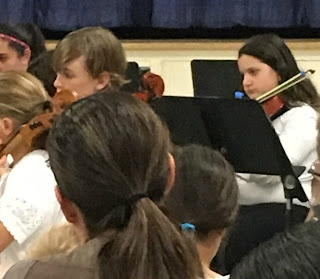 Their last song was the Theme from Star Wars. As a fun little addition, they each taped glow sticks to their bows, and for the last four measures of the song, the lights were turned off. It was pretty cool. 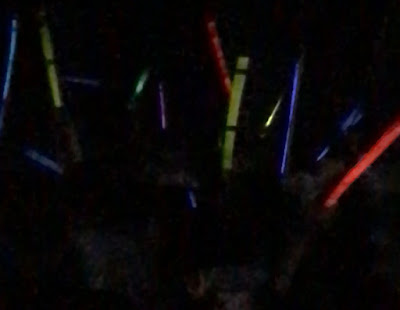 My friend, Linda (the friend who convinced me to do my very first trunk show, and now lives in Seattle), was at the Seattle Modern Quilt Guild meeting last night. Members of the Bainbridge Island Modern Quilt Guild were also there, with their raffle quilt--and they had used my Delta Breeze pattern! It was such fun to see this version. If you look more closely, you can see that in the squares of the larger bear paw blocks, they did some improve piecing. 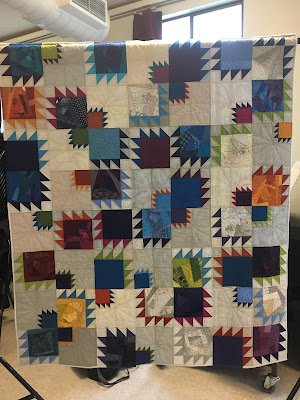 Ella is here this morning. She has taken to stuffing a backpack with items she might need when she is away from home. An odd assortment, but she seems to have all the bases covered. 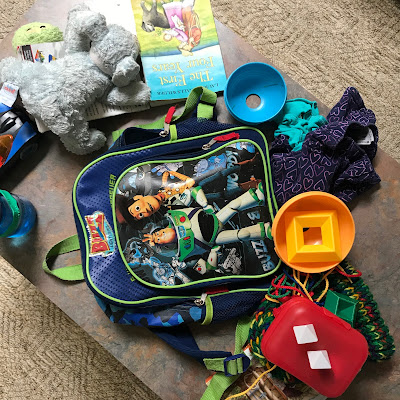 I'm going to try to get some sewing done this weekend. What kind of plans do you have?
Posted by Live a Colorful Life at 5/11/2017

I love the different perspectives from different parts of this vast country. Post season baseball???? We are just getting started in our winter parkas and cancelled games due to rain or unplayable fields! Rain make-up games are already scheduled; I'm hoping they do not get rained out!

Mostly cloudy and enjoyed it! Amazing, because we are looking for the sun to linger out for more than 5-minutes! We are trying to warm up, and you are already hot.

The lake full of water and the blooms are beautiful!

What a great get-away.

I'm so glad you and Mark had a chance to get away. It seems you have lots of friends scattered all around which is lovely. I remember when our son took up the violin. He was inspired by the music from Lord of the Rings at the time. Wish he still played but he moved on to the guitar.