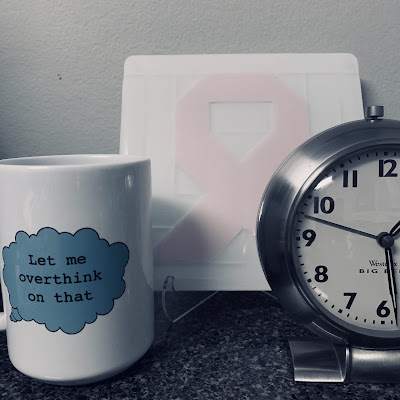 My great "before" was the afternoon of Saturday, November 10, 2018, when I felt a breast lump. By the following Thursday, November 15, after mammograms, CT scan and biopsy, I started living my "after," with a diagnosis of invasive lobular carcinoma, which accounts for only 10% of all breast cancers.

It is now five months later. Five months after the diagnosis, four months after the lumpectomy, about two months after completion of radiation, and one month after beginning medication I will probably be on for the next five to ten years. Right now I'm on tamoxifen. It was one of two medications recommended by my oncologist, the other being arimidex. They each target different things. They each have potentially serious side effects. Hot flashes? Likely. Joint pain and stiffness? Again, likely.  Endometrial or uterine cancer, stroke, blood clots, osteoporosis, among others....possible.

After I told my oncologist that Mark and I were planning a trip to Washington DC the end of May, and planning on a lot of walking, she didn't want to start me on arimidex because a side effect is very painful joints. But I know ultimately, that is her recommendation down the road because of some of the long-term studies, even though at the same time she acknowledges that my "absolute benefit" isn't that much different between the two. To this point, I have had no side effects on the tamoxifen. Not even hot flashes. But something else to be concerned about--studies are showing that the more hot flashes a woman has, potentially the greater benefit of the medication long term. So...I wonder, is it even working?? Should I make the decision now to change to the other medication? I know we will revisit the options at a later point. If there is one thing I have learned, it's that every woman reacts differently--side effects and outcome--which makes the decision all the more complicated for me. I want to be on the medication that gives me the best result for the longest time possible. Which no one, even my oncologist, can predict.

Because when it comes right down to it, it's a numbers game.

Our daughter-in-law, Christa, sent me a link to a podcast the other day, and I highly recommend it. The podcast is Everything Happens with Kate Bowler, who was diagnosed at age 35 with stage 4 colon cancer. In the episode "This is Going to Hurt Just a Little," she talks with pediatric oncologist, Ray Barfield. Dr. Barfield says that cancer has a special status in our culture, even though cardiac disease is the #1 killer. It's hard to make decisions. There is uncertainty and it has to be acknowledged. What day is it? Mark the date. What decision can we make that we would be okay with, looking back, that we made the best choice based on what we knew at the time. Mark the day that we make the best decision we know how to make.

Lately I have viewed my life somewhat like a play. "Cancer" auditioned for a part. I didn't like the character it played and I wrote it out of the script. However, I can see it lurking there off stage in the curtains. It won't go away. I know it keeps hoping to be part of the play again, maybe with a bigger role this time, maybe playing someone more evil.

Susan Love, M.D., who has writen comprehensively on breast cancer, says that using the warrior or battle imagery for dealing with a cancer diagnosis "...implies that we have more control than we actually do. Yes, we can make the best decisions and get the best medical team we can, but we can't will a cure, and those who die of the disease are no less worthy than those who survived. Rather than a battle, it is more like surviving a natural disaster like an earthquake. You did not cause it, but you may have contributed to the collapse of your house by not having built it to code. And then you fix it as well as you can, but it is never the same." Collateral damage.

After reading that the American Cancer Society recommends no more than two drinks per week, unlike the American Heart Association which says that wine can be beneficial to your heart, I have pretty much stopped my near nightly glass of chardonnay. And I'll admit, there are nights when not having that glass of wine makes me kind of whiny. But that is about the only thing I have found that gives me any potential control over my "after."

There was a time, early on, when I felt like a cancer "imposter." I only went through lumpectomy and radiation. No chemotherapy. No hair loss. No real "suffering."  I'm incredibly grateful that I didn't go through the suffering part.  It was caught early and was small. I have a good long-term prognosis. But I no longer feel like an imposter.

Do you have a great "before"? It doesn't have to be cancer. There are a lot of things that divide our lives into the great before and what becomes our after, the new normal. We hope we make the right decisions. But if there comes a time when we need to make a different decision, then mark that day and make the best decision we know how to make.
Posted by Live a Colorful Life at 4/10/2019