It has been a nice and relaxed week, with not much going on. Although Mark had planned on driving me to Santa Clara to the Pacific International Quilt Festival on Saturday, and coming home the same day (three hours each way), we decided to stay home instead. I was sorry not to meet up with friends but it was a good decision to stay home.

Our church is celebrating its 50th year anniversary. Mark and I started attending in 1978, shortly after Aaron was born, and have attended ever since. It's hard to believe we have been attending over 41 years! And other than the five years he was in the Portland area going to optometry school, Aaron has grown up in this church. He is now the head of the celebration committee. He and the committee have been delving into the archives and have been finding some (ahem) interesting photos.

For years, Mark sat in the sound booth. This must be from the early 1980s. He has made it known that he would like to go back to the mullet. His family unanimously gives him a resounding "NO!" 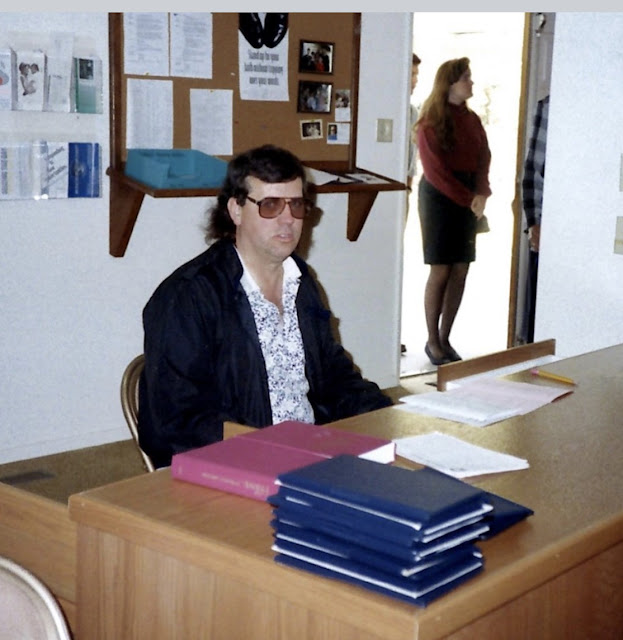 I accompanied the choir through quite a few different choir directors. This is me on the left. Ah...the hairstyles of the 1980s. Mine is totally from a bottle. My friend, Julie--her is totally natural. 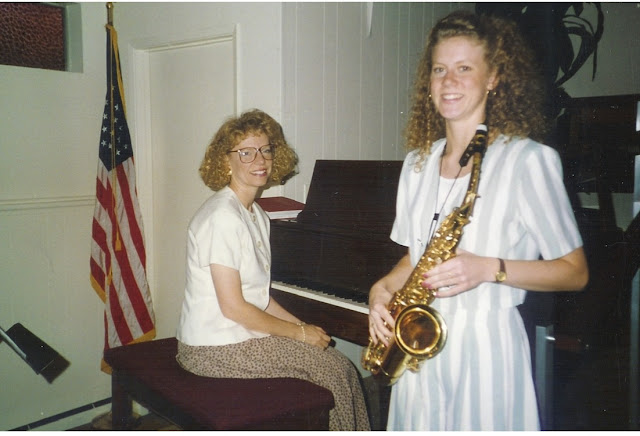 One of the things that was uncovered while going through a storage room was the old track for the Pinewood Derby. 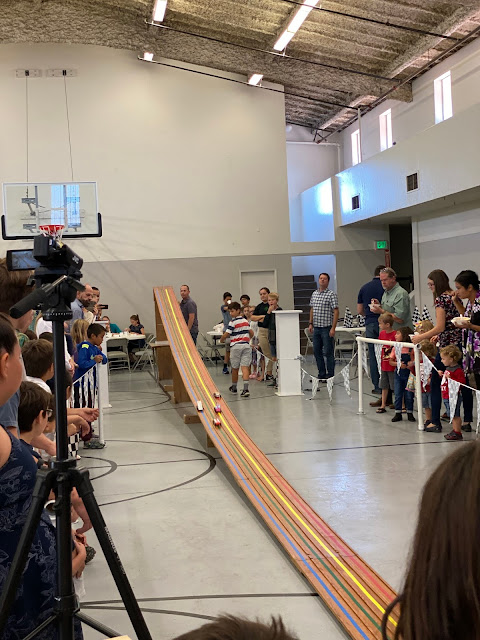 Once the track was uncovered, it was decided to hold another one. It has probably been 20 years since that track got any use. And this time, girls were allowed to participate!

It was such fun to watch the cars compete. I wish Aaron had kept his cars. Back in the day when he competed, his cars were always up against friends whose fathers worked on cars for a living. They knew their way around professional paint jobs. So while Aaron's cars were never the best looking, he had a father who knew how to make them fast.  Aaron came away with a couple of trophies (he also asked if I had kept his trophies. I told him that I had given him the box with trophies a couple of years ago when they bought their own house and I decided we were no longer storing his things. Ha!) 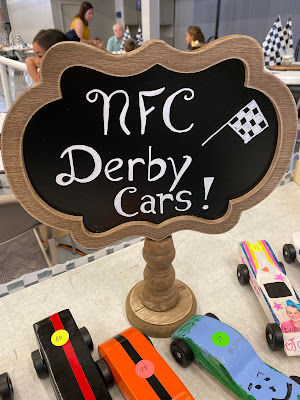 I think the blue one is Levi's. 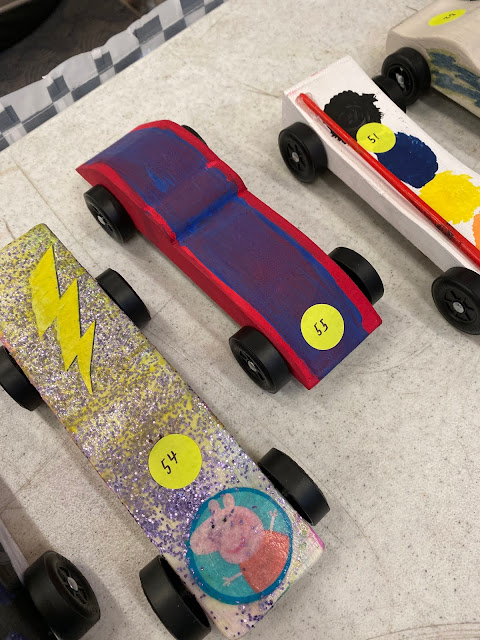 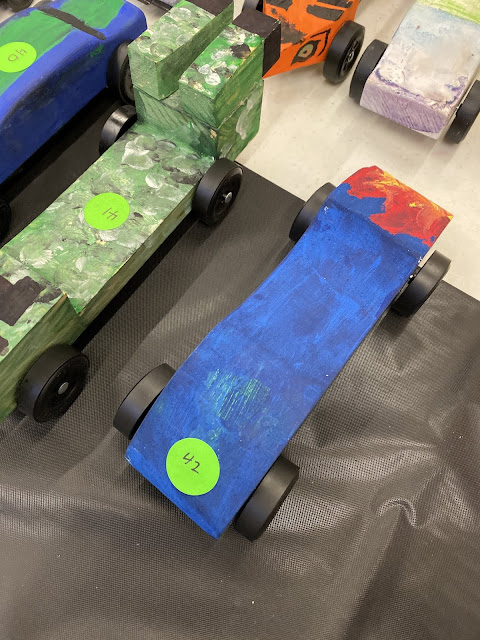 Ella was quite proud of her car. 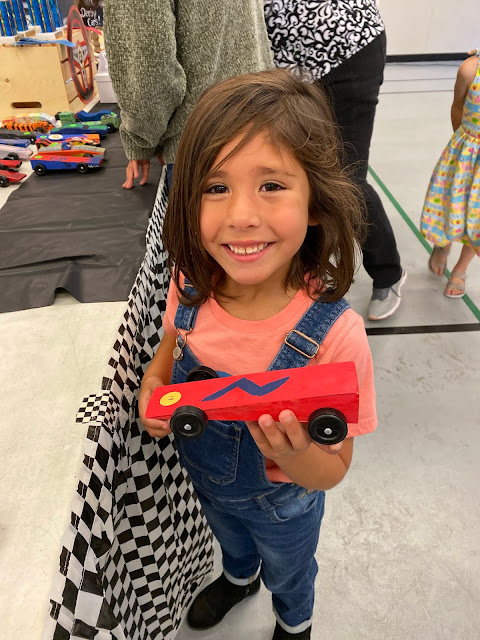 Hank Nickel built the track all those years ago, and he was here to see it used once again. 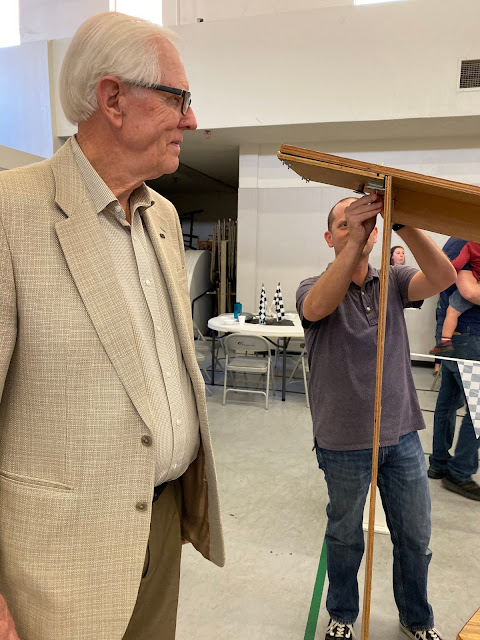 Aaron was in charge of letting the cars go. Four cars raced at a time. They were put into slots and then Aaron dropped a little contraption and they were on their way.

I tried to get a good picture of the kids and their cars. Cooperation from two out of three--Ella (as is often the case) did not want to have her picture taken. She was only willing to make her "fake" smile. I should be happy I was able to get a real smile in the picture above. 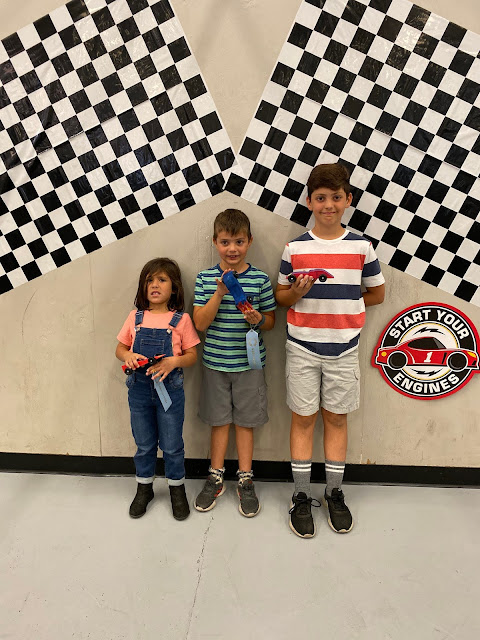 We thought maybe taking a picture with her friend Amelia would get her to smile. But no such luck. So I just told them to make a crazy face instead. Silly girls. 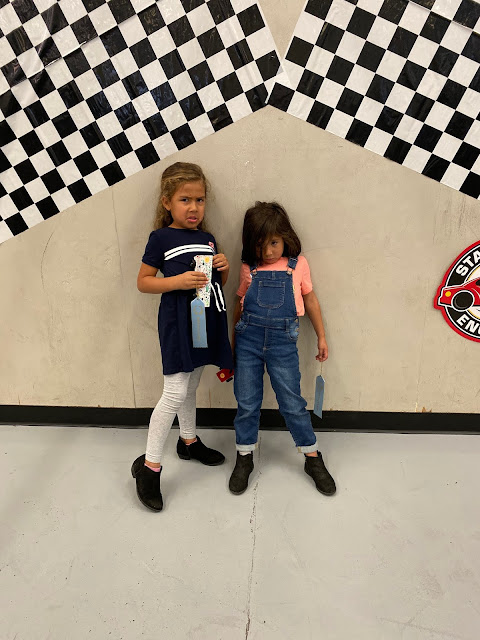 Haha, number one. I feel like I could actually make this costume myself every single time I shop at CVS Pharmacy. 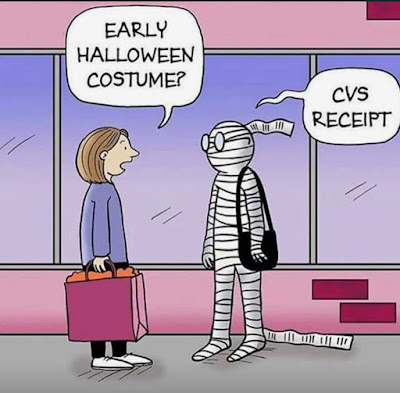 Darby (@quiltedsquid) finished three of my quilts this week. I'm super happy with them. Stay tuned for the full reveals as I get the bindings on! 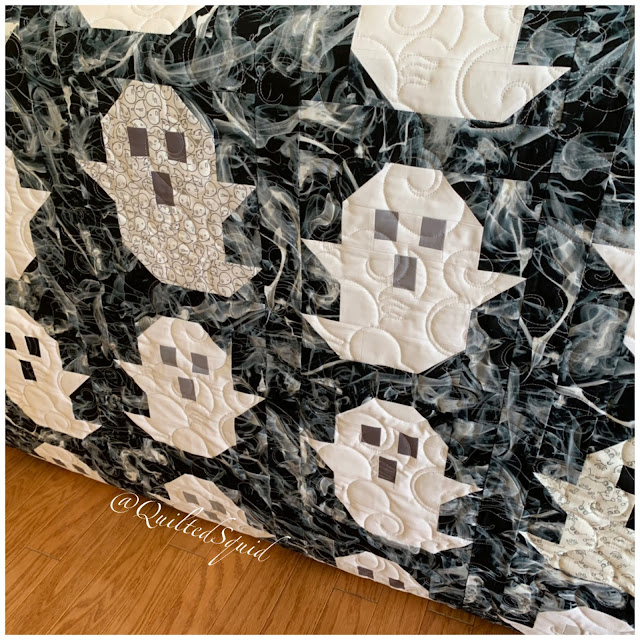 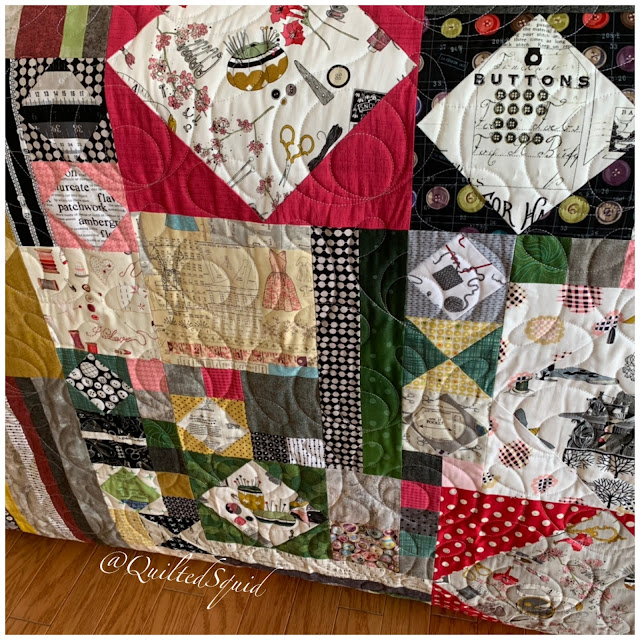 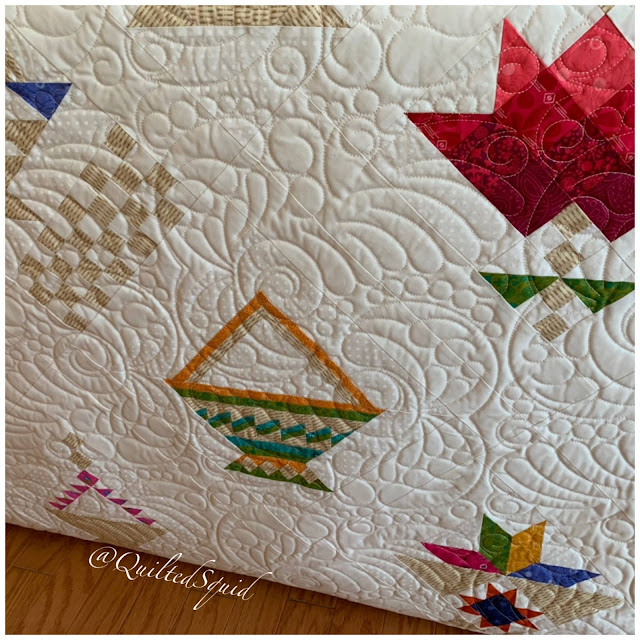 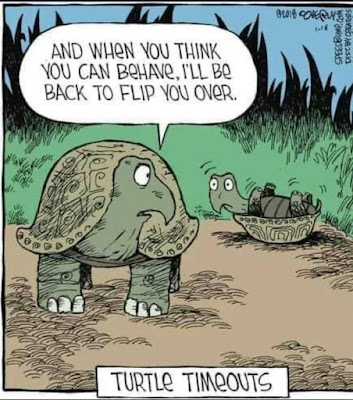 Every season, the manager of the thrift store (Thrift on Blackstone) changes out the display in the front window. It it always stunning. This was the summer display. I'm going to miss it, but I'm anxious to see what she has come up with for the new display. 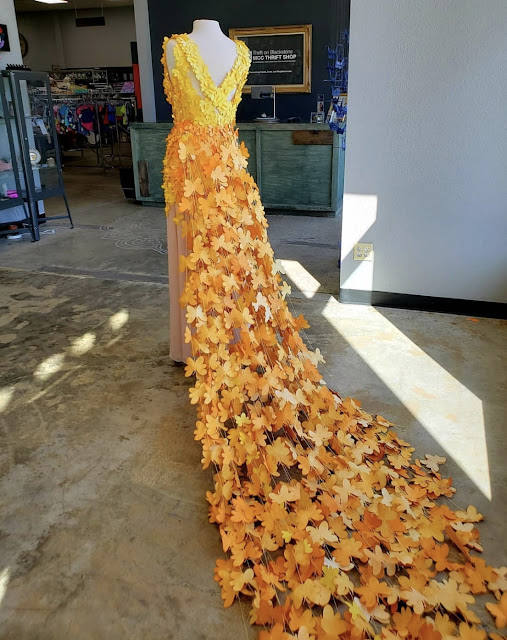 photo via @thriftonblackstone
I had lunch with Janice and Angie the other day. Angie was here from the Bay Area to stay with Janice for a couple of days. We met at a new favorite restaurant, Heirloom. And Angie brought a burnt almond cake (famous in the Bay Area) to share because yesterday was Janice's birthday. 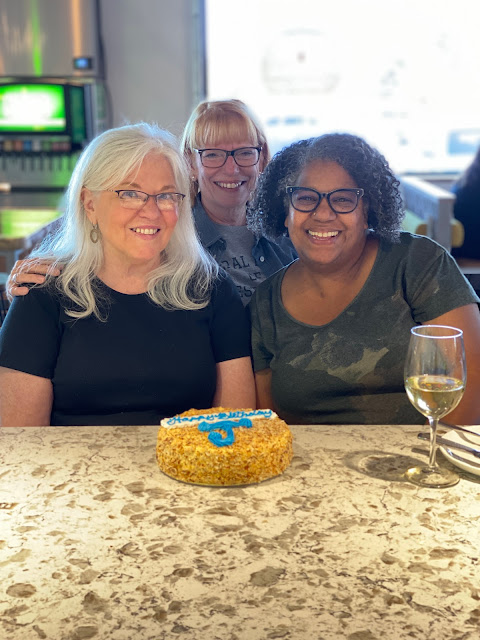 Heirloom has the MOST amazing mural on the wall. I particularly love it because of all the drippy paint. It got me to thinking about quilts. Well, in all honesty, quilts are on my mind like 75% percent of the time anyway. Isn't it gorgeous?? I already have an idea...and a stack of fabric has already been pulled. 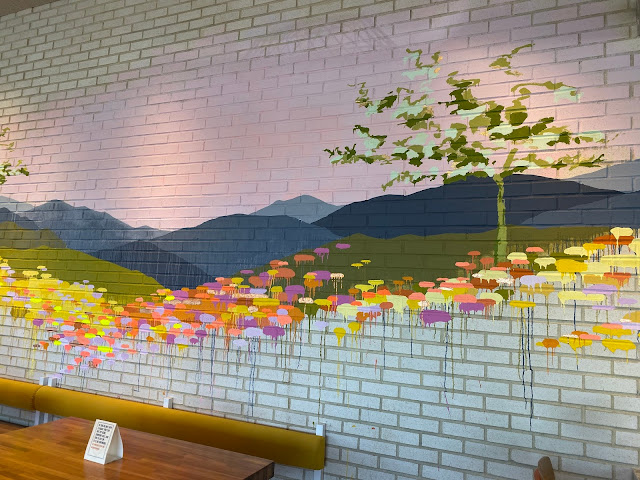 Mark and I enjoy starting our day with the outmoded tradition of reading the local newspaper at breakfast. I'm going to miss the days of turning the pages over while drinking my morning coffee. We have already been informed that starting in January, there will not longer be a Saturday edition. I think that is just the sad beginning of no more real newspapers. And reading it on a tablet is just not the same.

So anyway...we love the comic strip Pickles. I guess we identify with them because of our age right now. Anyway, I'll end with this...

Hi, Cindy, I always look forward to your posts. This one is especially fun with your archive photos. Your church's celebration looks like it will be special for all ages. Also, I look forward to seeing those finished quilts. I, too, love to read a newspaper and hate to see so many papers--both big and small--going under.

Love those old pictures of you and Mark. This post brought back memories of Cub Scouts and derby days too. I must say that I'm surprised you only think about quilting 75% of the time . . . I feel like it's 100% of the time for me. Maybe I should find a better balance in my life? lol I have read Zits and Baby Blues for ages because I could relate to the parenting aspect and now find myself also reading Pickles . . . I don't really like what that implies. I'm not old! Yet!

I'm glad the family has vetoed Mark's request to return to the mullet. Haha. I can't wait to see how you interpret the painting from Heirloom. I'm sure it will be another fantastic quilt. Thanks again for helping to kick off my birthday. Good times!

A great post and enjoy the photos of the grandkids. I remember the many Pine Wood Derby races, the graphite dust all over everything, the painting and how fast those cars ran. Looking forward to more on the quilts. Your church sounds like it is going strong and will have a wonderful celebration. Haven't taken the paper for a couple of years...they went to two days a week and raised the price! I miss the comics the most.

Those old pictures seem alarmingly familiar, I just try not to look at mine from the 80's. I can't wait to see what you do with that mural/quilt inspiration!

Thank you for this lovely post, a treat to read at the end of a long day. Fun to see Janice there (Happy Birthday, girl!) and loved reading all about the Pinewood Derby races. We have done that every year that I can remember, and then they always had a race for the Dads...as you can't keep them from building a car anyway.

Pickles was perfect--feeling this way lately -- and loved seeing your quilts. Can hardly wait for the full reveal for the baskets quilt! Bravo, Cindy--great post!