This has been floating around in my head for the last day or so and I want to get it down on paper. So I will begin this new decade with some reflections, and intersperse some of my favorite reflection photos from 2019.

I have been watching the Netflix series, The Crown, Season 3. In one episode, the Royal Family tried to justify the expense of the monarchy to the taxpayers of Great Britain by filming a documentary showing that they lived normal lives, just like everyone else. In one scene, they were all sitting together watching TV, something that was completely staged for the film crew. 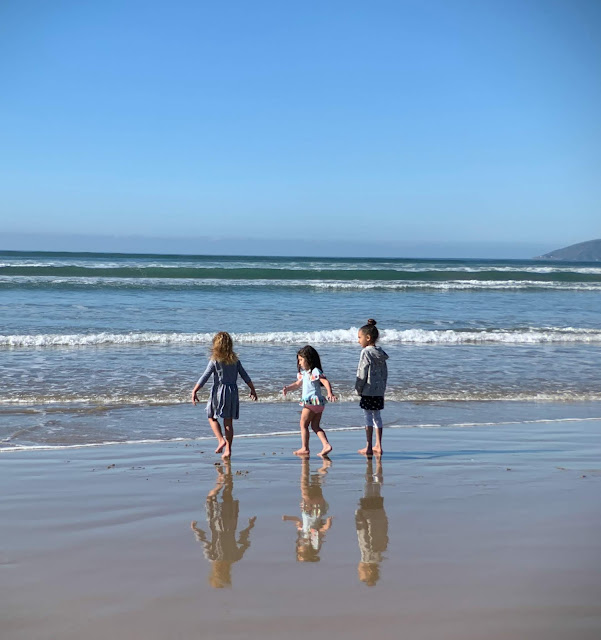 Oceano Dunes, January 2019
The Prime Minister paid a visit to Queen Elizabeth in which they discussed the documentary. When she said they had just wanted to show the people of England that they were normal, he replied, "You are not normal." Her response was that yes, they were: they work, they get tired, they get colds, they have uncles who embarrass them...The Prime Minister then said, "They don't want you to be normal. They want you to be ideal." 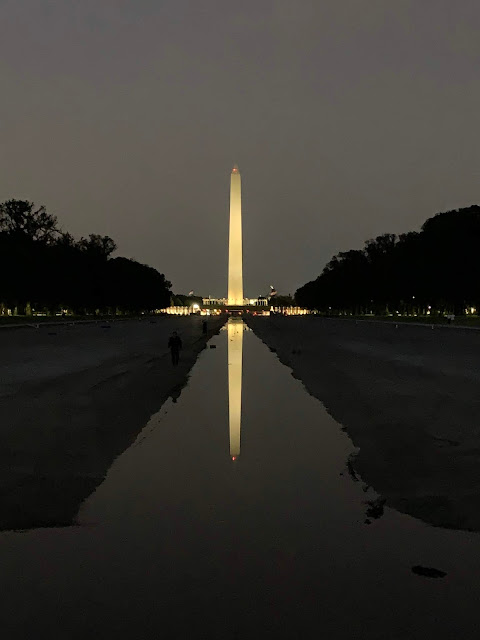 Washington, DC, May 2019
Do you ever feel that everyone else on social media is ideal, and that you are merely normal? It puts unrealistic expectations on us. Because it is, in fact, unreal. Instead of being inspiring, it can make us feel "less than": less than competent, less than productive, less than creative... 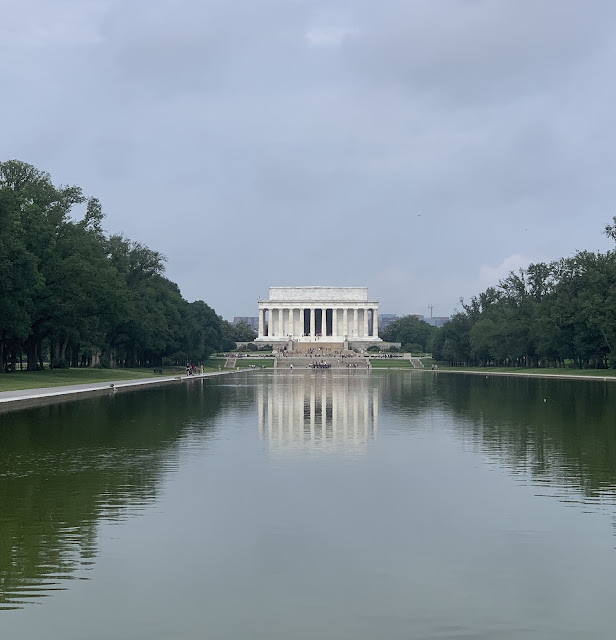 Washington, DC, May 2019
I will be the first to admit that I spend way too much time on Instagram, sometimes just mindlessly scrolling. At the same time I am bemoaning the fact that I don't have enough time in my day to accomplish the things I really want to do, I'm using up valuable time with something less than valuable. 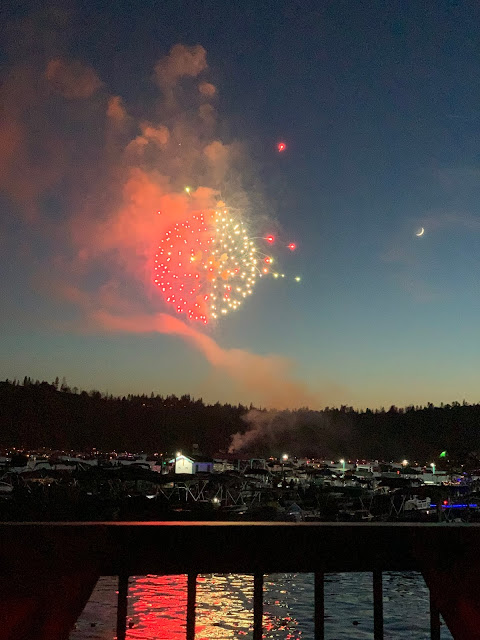 Bass Lake, CA, July 4, 2019
My good friend, Elizabeth, sent me an awesome book, Keep Going, by Austin Kleon. In it, he says, "Creativity is about connection--you must be connected to others in order to be inspired and share your own work--but it is also about disconnection. You must retreat from the world long enough to think, practice your art, and bring forth something worth sharing with others. You must play a little hide-and-seek in order to produce something worth being found." 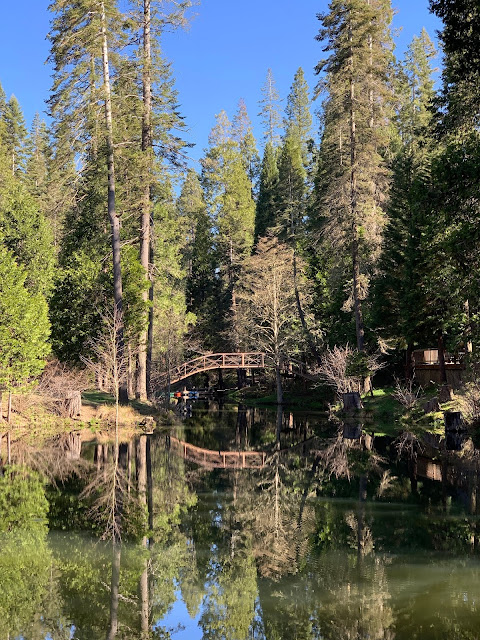 Hartland Quilt Camp, April 2019
So what will this look like in 2020? I don't know yet. I know Instagram will still be part of my life. I've made a lot of friends because of it--both those I have met in real life and those I may never meet. But I hope I can resist the lure of that app on my phone whenever I have some spare minutes, when I'm bored, when there are things to do that just don't sound that great.  It would be nice to think that I can take those moments to just be, to let my brain rest a bit, to watch people instead of a screen, to interact in real time. 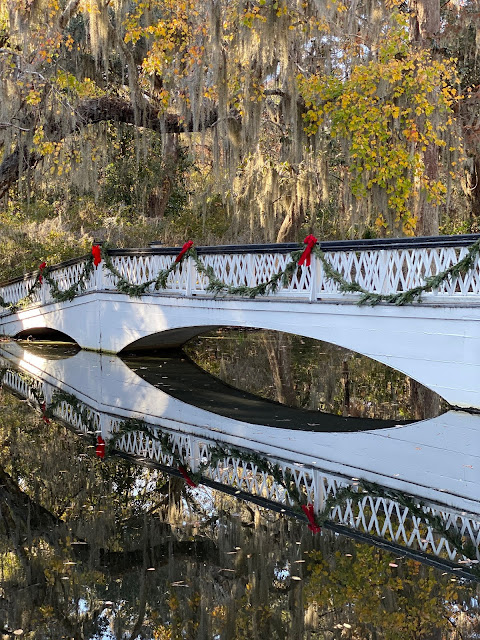 Magnolia Plantation, GA, December 2019
It's a new year. A new decade. Time for a fresh start. Time for a little disconnecting.
Posted by Live a Colorful Life at 1/01/2020

I've shut off FB and, to save a whole $20, reduced my cable to network only (very boring, so it's turned off more). Need to turn on the radio so I don't mindlessly surf the Internet, which will free my hands and eyes for other, higher priority, projects.
Really like your choice of photographs on your post.
Hoping for only the best for all in 2020.

I went to a spa day with my two oldest daughters this past fall. No cell phones allowed for the whole day. It was amazing. We should all do it more often. Happy new year Cindy. I hope it's everything you hope.

These are deep thoughts for the first day of 2020. I can understand your point of view, if you have other things that need doing. And you have people to do things with. Forpeople like me, who don't, social media is "family." I guess I haven't experienced the comparison thing, except to see quilts that make me want to design as well as several of the "super" modern quilters whose work I admire. Too often I see a wonderfully modern quilt they've created and thought to myself, "Now why didn't I do that?!" I know I'll always be normal, not ideal, and I'm okay with that. I cherish the time I get to spend in my two quilting groups. Those activities are where I find friends who enhance life spent with online friends. Have a blessed 2020, Cindy.

Love this post and all its photos, and so glad you found something to like in Kleon's book; I found it full of wonderful things that "talked" to me so wanted you to have one, too. We've talked a lot about just focusing on what we want to do, not letting others determine our trajectory, and I see so much wisdom about that in this post. Have a lovely and wonderful new year!!

Very well said. Thanks for sharing your thoughts and fab photos. Yes, it can be a challenge to find a balance between connecting and disconnecting. My To-Do list is long and my time is limited, so the New 2020 Decade is the perfect time to make some adjustments. Here's to hoping 2020 brings us joy and inspiration.

wishes for a very good new year Cindy for you and your family. Thanks for all your posts. They are lovely and always enjoyed. Our journey is still ongoing................cheers.

YAY for disconnecting! I am delighted that you will still be on Instagram so I can still send you hearts and stuff <3 <3 <3

Good reflection and important to be keep life in balance. Relationships are so important for me. People, connection are valuable. In person is much more fulfilling than screen time connection.
I think both are good. Keep it balanced and in perspective. I like your perspective!

Thank you for this well stated reminder. You've stated some of my very thoughts. I also love how you tied in your reflections with all the great photos you chose for the post. Have a wonderful and productive 2020 doing just what YOU want to do.

I liked reading this post. I've cut down on looking at social media. I recall that I joined Facebook to follow my daughter and her photos when she moved to Taiwan for 6 years, and Instagram to follow my quilting friends. I also feel like I am just normal, not ideal. One thing I saw in your photos (and maybe I am putting too much into this) is that the thing reflected in the photos is not as clear as the object itself. I view myself as the fuzzy picture of what I want or can do; where if I look at myself, I am solid, complete, etc. I look forward to checking the Kleon book out of the library. Thanks for the post and the best for the new year.

I love the quote about creativity, much to think about there. Not just in the things we think of as "creative" but in creating a life, actually. I don't know exactly what my parents did to me as a kid, but I've always leaned more towards enjoying seeing what others create and sometimes being inspired, but seldom wishing to compare or recreate them. I am however deeply competitive when it comes to games and academics. Both of which are more aligned with my nerdiness and far from being "Instagramable". I'm trying to retrain myself to consider sewing instead of getting sucked into computer time on a device. Alas, it's easier to skim IG for 15 minutes than drag out my machine for that time. So I'm working on strategies to use those short bits of time well. We shall see.