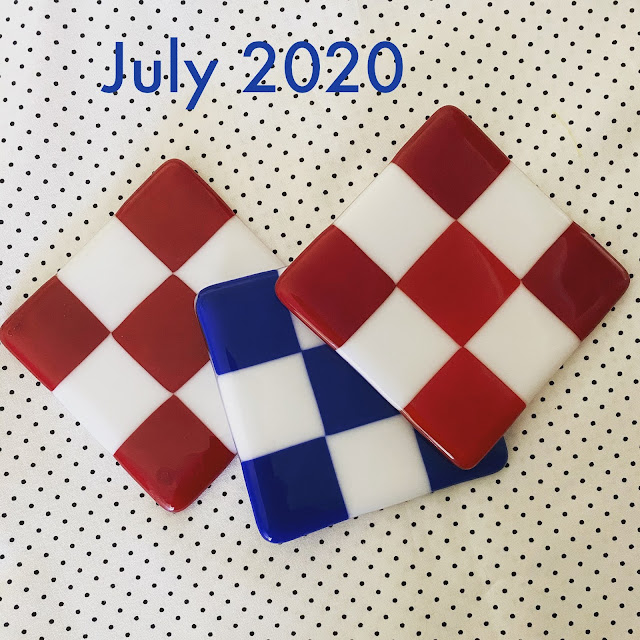 Welcome to July. Wow. The year is half over. Although to me, March seems like five years ago. As  the number of COVID cases has spiked dramatically here in California, things that were open briefly have now been shut down again.

I had actually started a blog post about my feelings of "life during the time of COVID-19," but was having a hard time crystallizing my thoughts. And then I read this on Instagram, written by Aneela Hoey, and thought this is EXACTLY how I feel!: "My head feels turbulent, exploding with thoughts but I feel I have nothing to say. These past few months I've lost every bit of desire to do anything creative. Which is confusing because as well as being my work, it is the thing that gets me through all of the other stuff. I feel like I'm at a crossroads without a compass."

There were so many confirming comments. Aneela's feelings are not isolated. No. They were echoed over and over and over. @bespokeoutlaw mentioned reading an article "about this unnamed feeling we are all experiencing being a kind of anticipatory grief..." So many commenters said they had to force themselves to sew something. @hello.erikabea said "...I'm holding out hope that it will change, or I will change." @_michellequilts_ said, "Being creative/doing creative things takes emotional energy. And right now there are a lot of things in our world that are sapping our emotional energy."

As someone else mentioned, it's both affirming and very sad at the same time. Rachel Sterling @sterlingsewn had some good advice, however. "...I think it's important just to acknowledge it and give yourself some credit for whatever you ARE able to do. There is no map, but that doesn't mean you're not making progress."

That's what I need to remember, on all these days when I feel like I'm making very little progress.

But you know who DID make progress? Gabe did some joyous sewing, and it was such fun to be a part of that.

To say that he is a Harry Potter fan is a severe understatement. Both his older brother and sister were fans, but this kid lives, eats and breathes Harry Potter. He decided he wanted some Harry Potter pillowcases. So I purchased a couple yards of HP fabric and he went to work. He also made a cute pillowcase for Ella. I had tried to get her to sew it herself but she wasn't interested. Maybe later... In the meantime, he was happy to make her pillowcase as well. 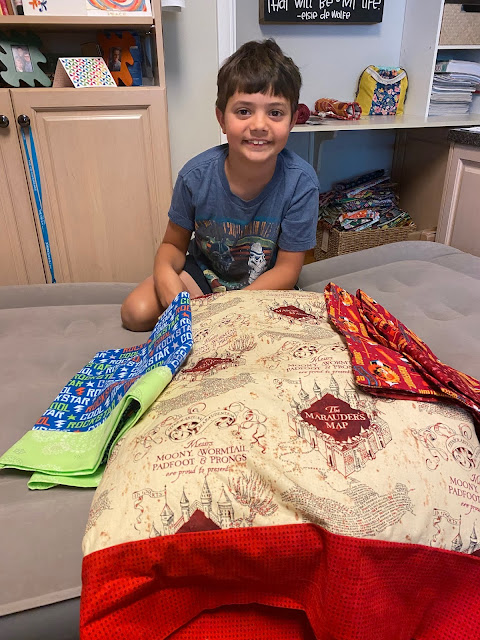 Then Gabe designed a banner for his room. He had a very clear vision of what he wanted. "Red and gold stripes with points." I thought having it come to the point in the middle would be the easiest. But no, he was adamant that it needed two points. I cut out some strips 5 1/2" by 12 1/2" and told him to put them on the design wall. He quickly decided they were too wide, so I cut them down to 3 1/2". 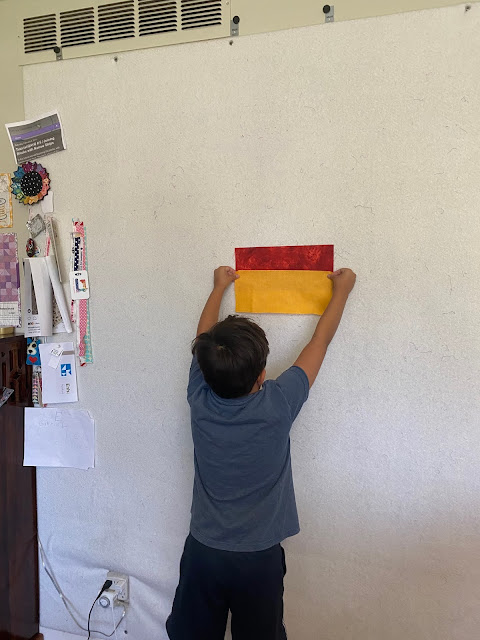 He's getting very comfortable with the sewing machine. He told me he needs his own machine. His dream could definitely come true--little does he know that I don't own three Featherweights for nothing! :) 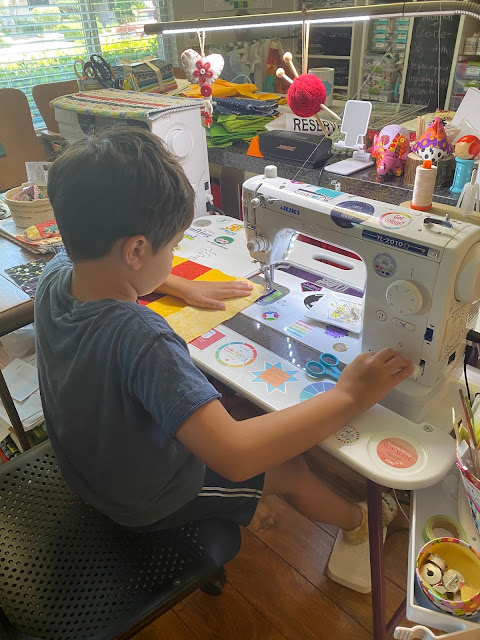 I'm really glad he stuck to his vision. He knew what he wanted and he made it happen. 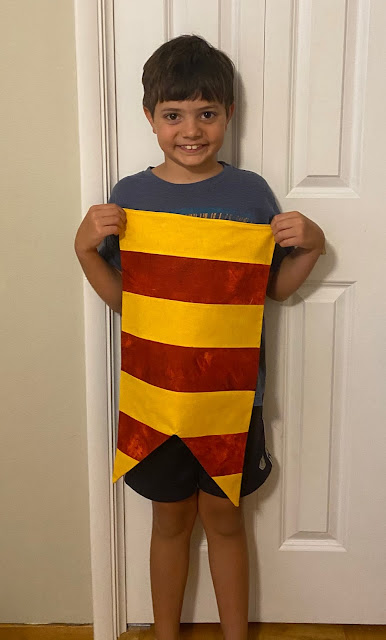 It was hot enough to get out the slip-n-slide. 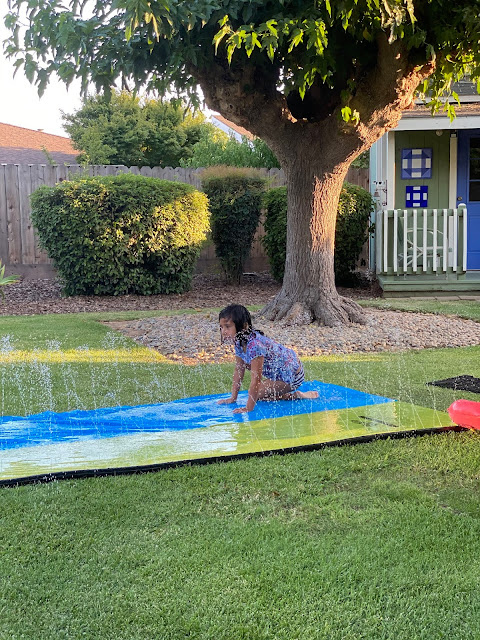 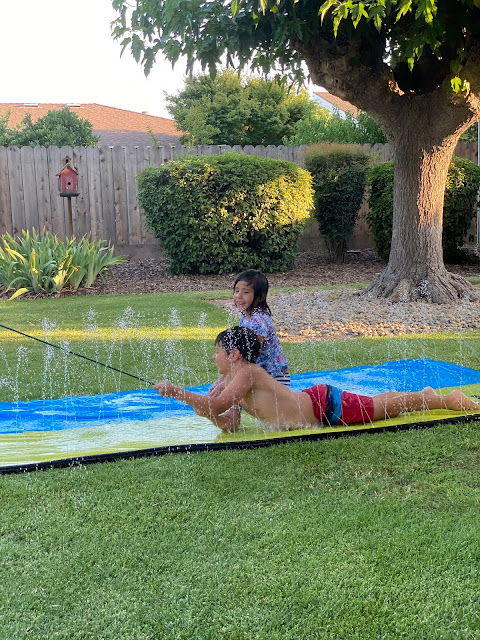 I think we might be getting it out quite often, because... 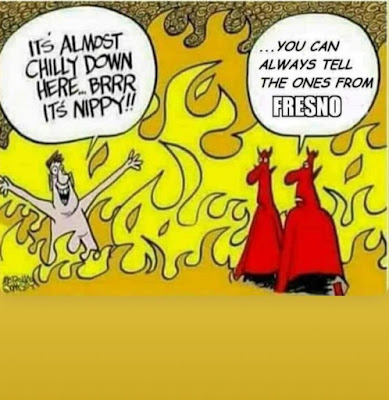 My first dahlia is beginning to bloom. I'm SO excited! Mark and I really don't enjoy working in the yard, even though we want our yard to look nice. We have an excellent gardener for that. But this year, we have planted flowers and we've been enjoying them a lot. 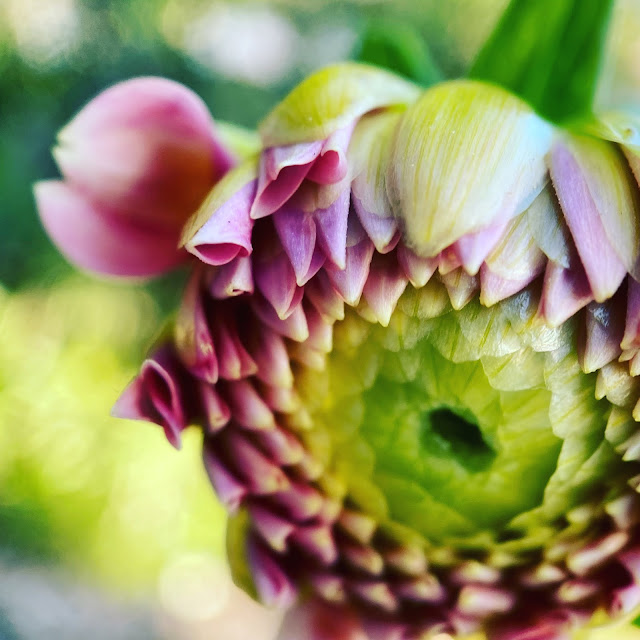 Are people wearing masks where you live? Here in California--not so much... 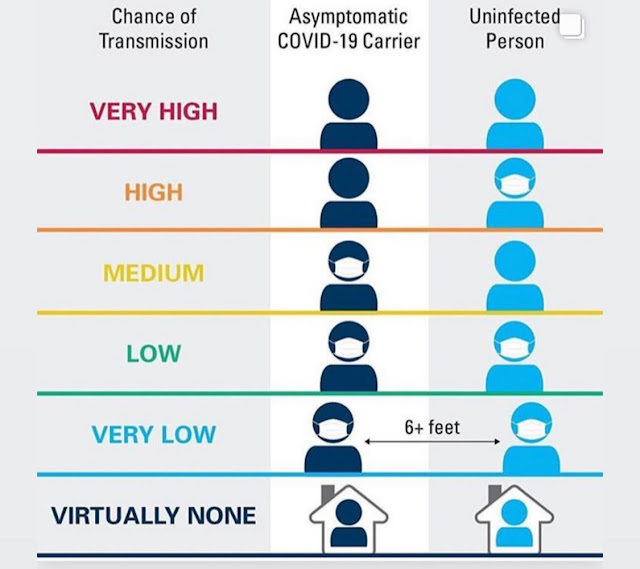 With the spikes in cases, it's unlikely that fall sports will actually happen. Mark will probably not be refereeing any sports until spring. Even I will miss football season. It's not that I pay much attention to the games, but I love the sound of the games in the background. It's nice "white noise" for me.

This is how the year is shaping up. 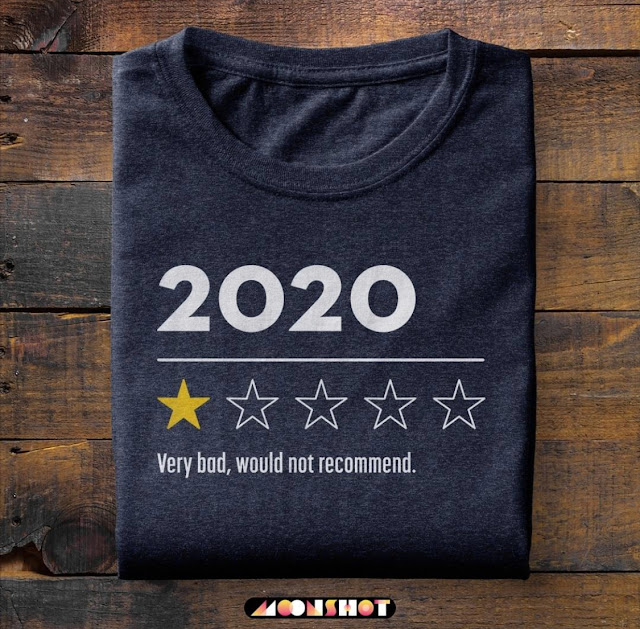 But I'll end by focusing on the upcoming month. 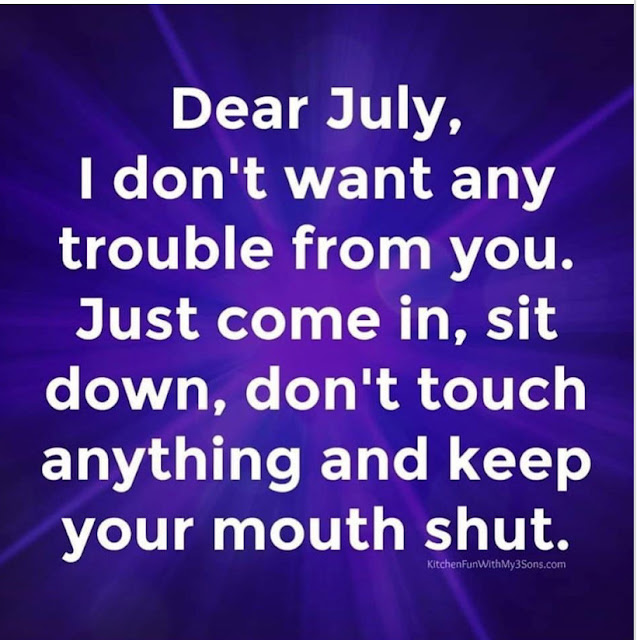 Thanks for all the funnies. We need those right now. I love that Gabe loves to sew. My grands aren't into it, and since I am 3000 miles away, I can't really try to get them into it. He is getting good. How old is he? I love that he knows his own mind with regard to his sewing pattern. Stay cool. It's been cool and mostly cloudy down here. Happy 4th.

Gabe's sewing skills are looking good. He must have an excellent teacher. The last couple of weeks we've been doing a lot of yardwork and I've done no sewing. Maybe next week. We should talk for real soon. Happy 4th! Stay safe.

It’s great that you can share sewing AND time with the grandchildren now. I love watching the little ones sew, especially the boys. They are fearless! I always enjoy your cartoons. Thanks for the chuckles.

It's interesting to know other creator-type's thoughts about creating during a pandemic. I guess I'm in the minority because I've made and made and made - more quilts and other sewn items than I normally would. But I'll admit to doing so more as a "frenzy," to keep my mind occupied. The news all-around is too dismal to dwell on. My husband and I have been calling 2020 "the lost year" because, like California, the Florida pandemic rages on. Compound that with no idea when it will be safe to visit family, and the alone-ness becomes a sad way of life. It's wonderful that you can sew with Gabe, and have your grandchildren over to play. Your funnies are all great, again, because they're sadly true. I'm glad to have a blog to record at least some of what's been happening, and as a place to share the uber-productivity that a pandemic brings! :-) Who knows when such a time will ever happen again? I say, "Never, never, never!"

Thank you for another great blog post. It is so much fun to mentor children in there sewing adventures. My GD (almost 18) is on a road trip and sent me a selfie with a neck pillow we made together 5 years ago! She also had her pillow case and the backpack. These summer projects were things that have made memories for years to come. And Featherweights are awesome. The kids started on mine....before I had a machine with cruise control!! Hope you have a wonderful 4th.

I have been able to sew, but harder time reading...seems like my mind wanders too much or something. Getting better but ugh! Stay safe. LOVE the HP stuff!

How exciting to see Gabe develop a vision and see it through to the finish! The cartoon about Fresno cracked me up. The summer I was 3 or 4 my dad went to Fresno State for some advance studies and he told me stories I was fascinated by. He couldn't eat a popsicle before it would melt off the stick! I was, of course, fascinated that he was eating popsicles regularly. Ha! He also told of studying in the pool to stay cool in those days before a/c was widely available and affordable. I, too am missing the sound of sports in the background (albeit not just any sports). I grew up with that and so summer was baseball on the radio and football on the TV. I love that some grandma's keep a hope chest and you have a fleet of "hope" featherweights. Grandmas are so smart. Stay cool!