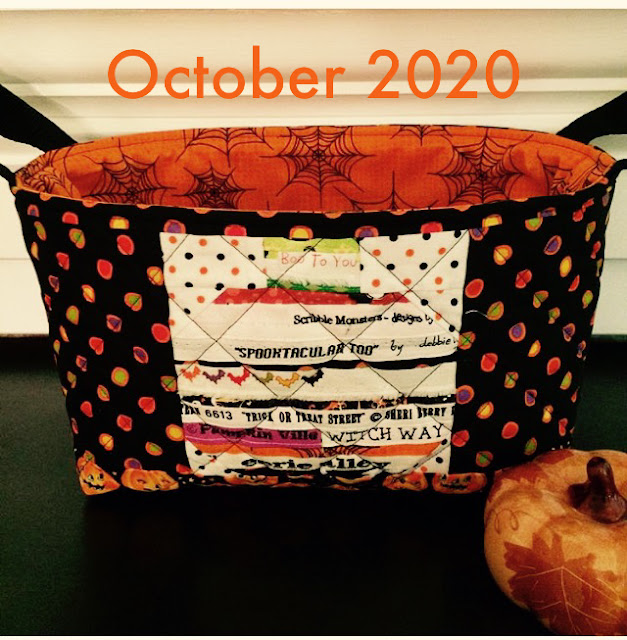 Charlotte celebrated her 14th birthday in September. Although "celebrate" in 2020 definitely has a different definition than in any previous year. She decided she wanted to go to Yogurtland and then watch a movie. Mark and I had not been to Yogurtland in the past six months. You enter the store, sanitize your hands, put on plastic gloves, and then you are allowed to fill your cup with yogurt (although the selection of flavors is about 1/3 of what they usually carry). When it comes to adding the toppings, it is now a point and choose kind of deal. Nevertheless, it was a beautiful afternoon and there was a nice table outside where we could sit and enjoy the time together. 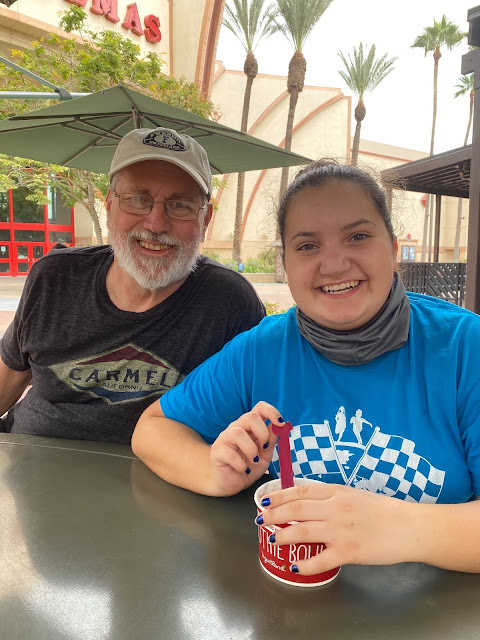 Then we came home to open some gifts and watch Frozen 2 together. Charlotte particularly enjoyed watching Frozen 2 at our house because she could sing each and every song out loud, without any of her siblings telling her to please stop. Don't get me wrong--she has a beautiful voice, so Gramps and I enjoyed the singing a lot.

She has been working her way through the Gilmore Girls series. Gramps kept giving her a bad time because he thinks the dialogue is SOOOO fast, as in "nobody talks that way in real life." So when I found a t shirt that said "Life's Short. Talk Fast. Gilmore Girls" I knew that was the gift he HAD to give her. 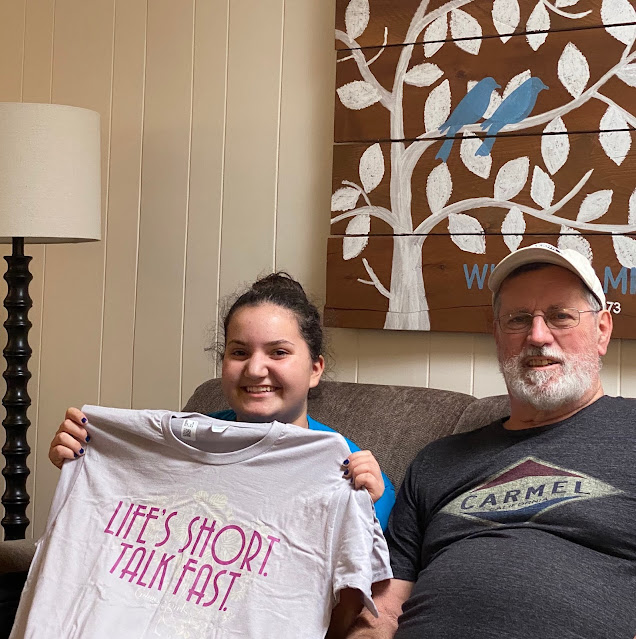 She also received a cute vintage hotel key from the Dragonfly Inn. Remember those diamond-shaped plastic tags that came with your motel room key? And a set of pencils with Gilmore Girls quotes on them.

This girl is fun, creative, an avid reader, compassionate and kind, an amazing older sister. We love her so very much and we feel very loved in return. You can't ask for more than that. 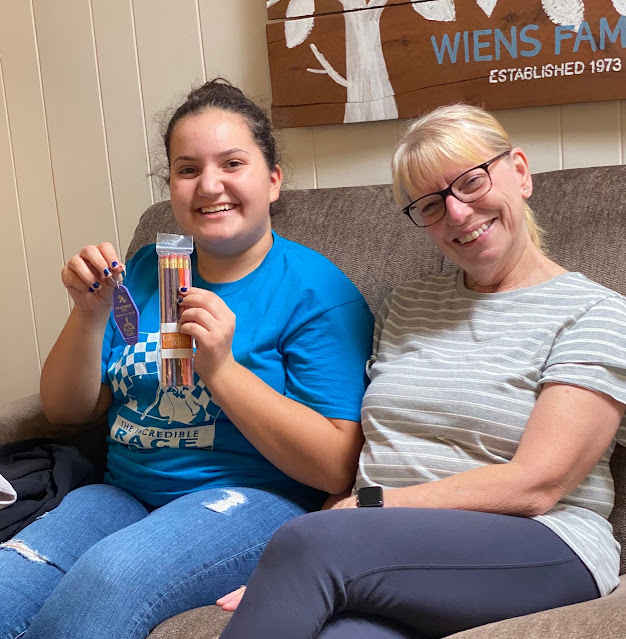 Gabe continues finding more Harry Potter craft projects. This time it was string art, which is another craft from the 1970s that has made a comeback. He picked it up quickly and it turned out really cute. 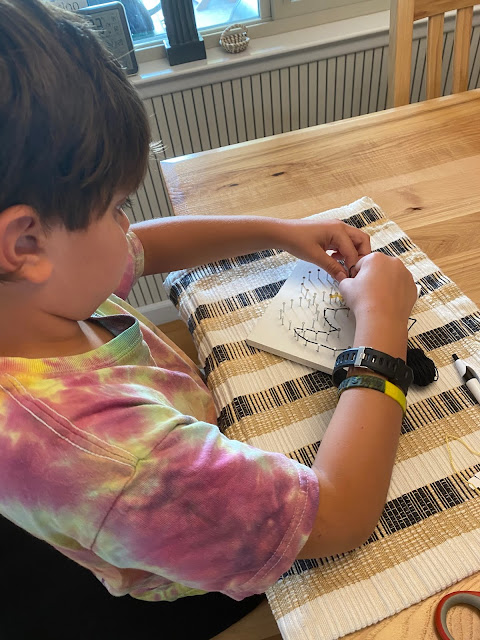 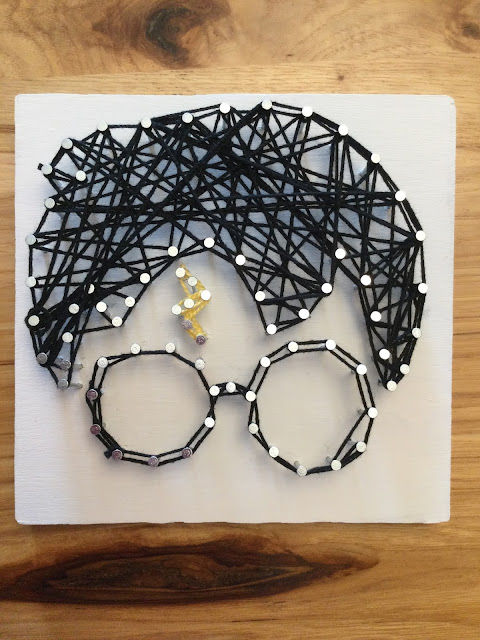 My friend, Shelly, has been requesting "signature" blocks for a future quilt. The fabric to make the block has been on my cutting table for months. I wanted to make her a cute pincushion before I sent the block. Hence, the real reason it has been sitting on my cutting table. It was one of those projects you think will take a lot of time, and really doesn't take any time at all once you begin. She lives on a farm and raises a lot of animals. So I had to use the cute print with the flowers in the boot (I wish the flowers showed more but I didn't have very much space to work with.) 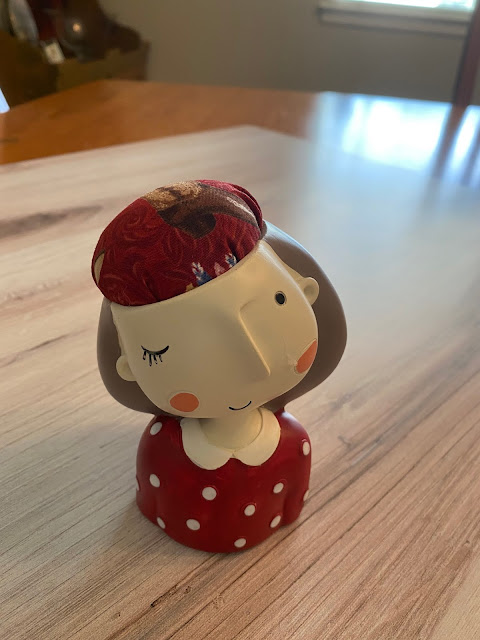 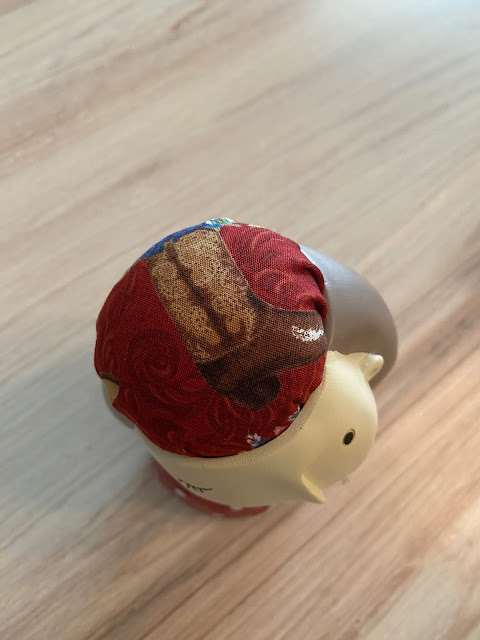 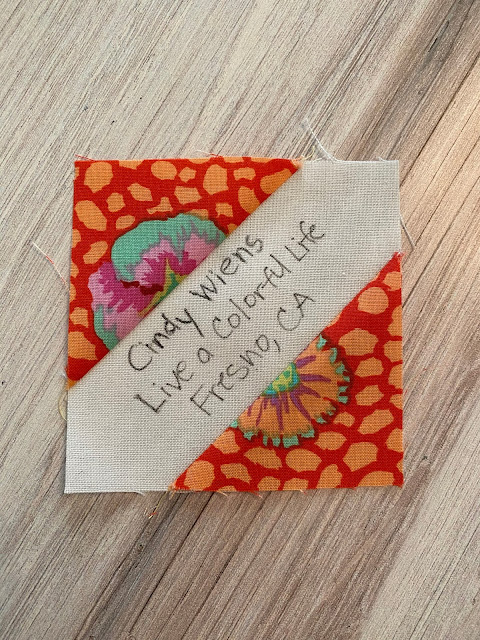 Now that it's over, I can mention what was probably the most stressful week I have had in 2020 so far. And that is saying a lot, considering what 2020 has looked like. A couple of weeks ago, I went in for my six-month breast cancer checkup. I had a new nurse practitioner because my regular one was on maternity leave. As she did the breast exam, she stopped and said, "Have you felt this before?" and proceeded to say she felt a lump but had "low suspicion" that is was anything serious. Nevertheless...she wanted to order a diagnostic mammogram and ultrasound. And then spent the rest of the appointment apologizing for freaking me out. Um, sorry...too late...
The week in between that appointment and the time I had the mammo and ultrasound was super stressful. I can tell you without a doubt that once cancer has invaded your body, it proceeds to play mind games with your head that can get increasingly worse. And that's what happened during the week. Even though I knew better than to "research," I did more reading than I should have--risk of recurrence, recurrence in less than two years, etc. So by the day of my tests I was quite convinced that the news would be bad. After all, it was my third mammogram in nine months, and my second ultrasound! The mammogram was more brutal than usual--they do extra images with a diagnostic study. The ultrasound was much shorter than I remembered it being in January, so naturally I thought, "Well that can't be good." They had told me I would have the results before I left the facility. I was expecting to wait 20 to 30 minutes, but within 15 minutes the tech came with with the report that there was no sign of cancer. So what was the lump? It could be scar tissue, fibrocystic disease, or??? Whatever it is, it is NOT cancer. Hallelujah! My point is: October is breast cancer awareness month. Make SURE you are aware of your body and any changes you find.
Mark had dropped me off at the hospital for the tests, thinking he didn't want me to drive. So when I called an hour earlier than expected (I had been told to allow two hours for the tests), his first thought was that I was being scheduled for a biopsy.  When I told him it was all good news, we did something we have not done in six months. We had lunch at a restaurant, not pickup. We were escorted to the back patio, where there were few tables and lots of fans. We felt safe eating there, although it was kind of weird to be sitting at a restaurant table and being served! We are normally quite frugal when it comes to dining out, but decided that price was no object--order anything off the menu! I splurged with a glass of wine, meatloaf and mashed potatoes (always my go-to comfort food)--Mark had a pastrami sandwich, and then we ordered carrot cake. It was huge! Like enough for four people. We took most of it home, and wow was it ever good! 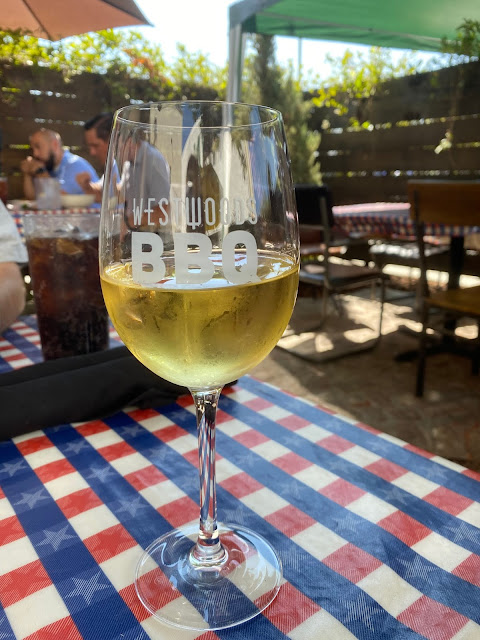 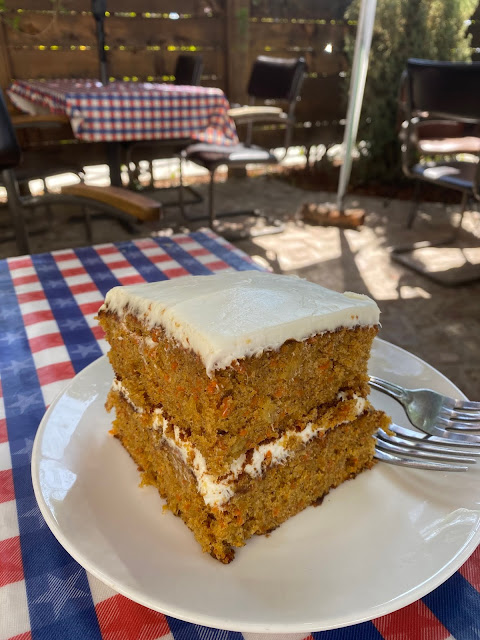 I told Aaron we are getting him this mug for Christmas. 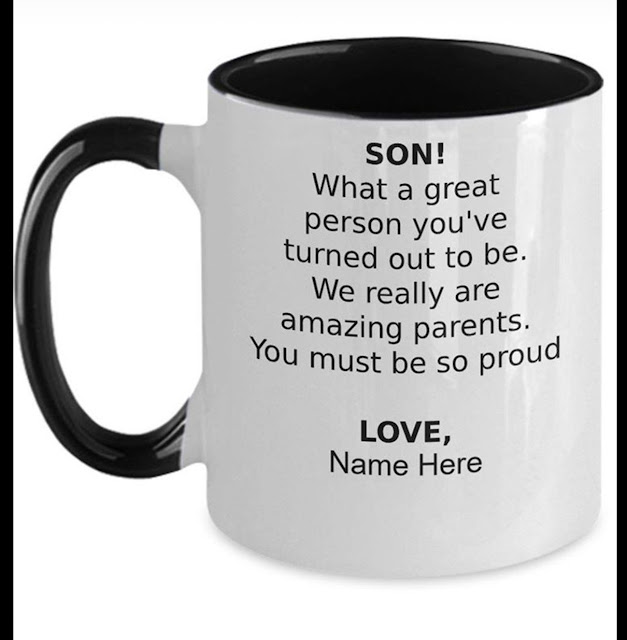 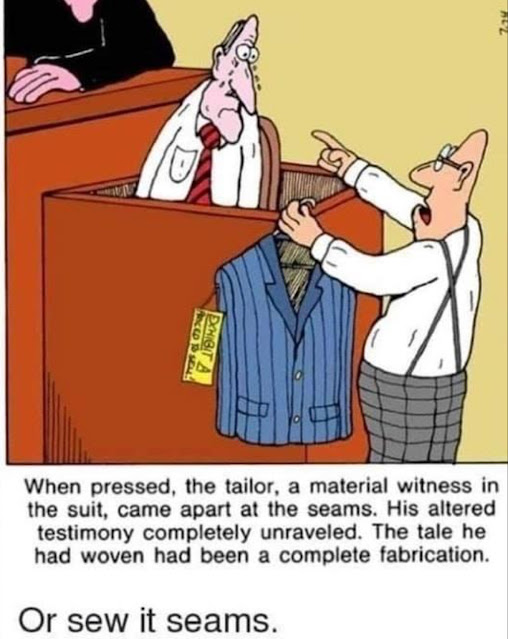 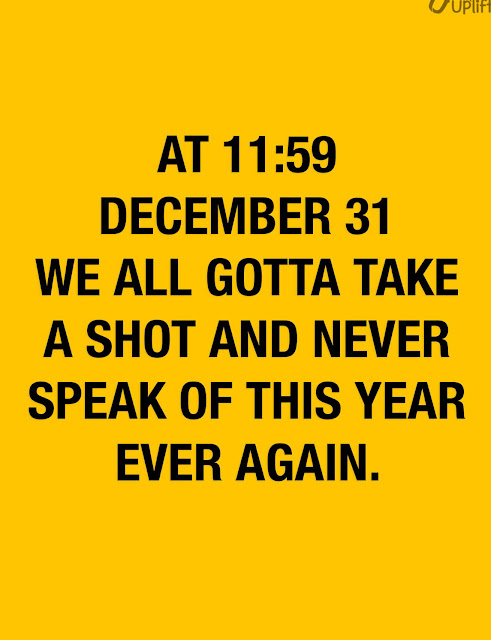 I've mentioned that we are holding online school at our house two days per week. When school first went online back in March, Aaron and Christa, and Stacie Winckler (their "bonus" daughter), who was living with them at the time, dubbed their online school Wienskler Academy (a combination of our last  name and part of Stacie's last name). They even had a school mascot (Big Foot) and a Latin motto: Propter Virus, Domi Debemus Scholae, which roughly translates to "because of the virus, we school at home," or something like that. (I was lucky enough to procure one of these stickers and it now resides on my sewing table, although it is out of date this semester as it is now K-9). 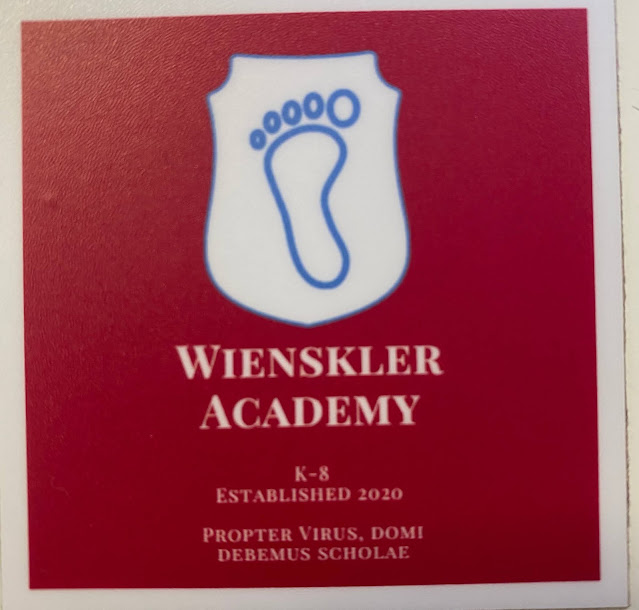 We have been dubbed Wienskler Academy (West Campus) since we live a mile to the west of them. Charlotte decided that our classrooms need to be labeled so she made signs for each one.

This is the first grade classroom. 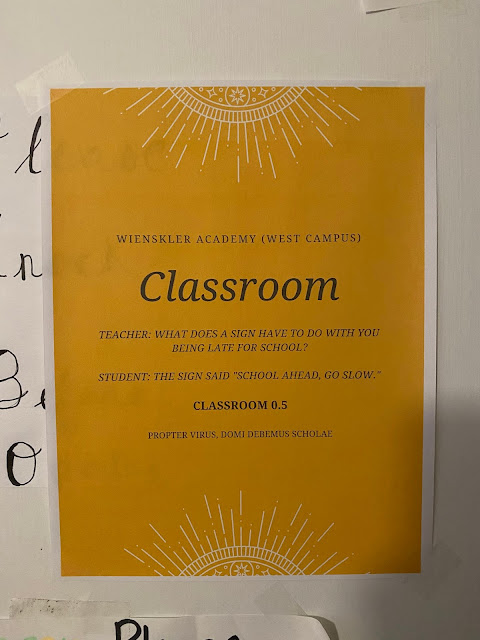 The third grade classroom doubles as the cafeteria during lunch time. Wondering about what it means to "Grandma it"? So a few weeks ago I happened to drop something while eating, and Levi said, "Way to go, Grandma. You just 'grandma'd that," and now any time anyone drops anything, someone says, "Hey, you just grandma'd that." It's weird. I guess you have to be there... 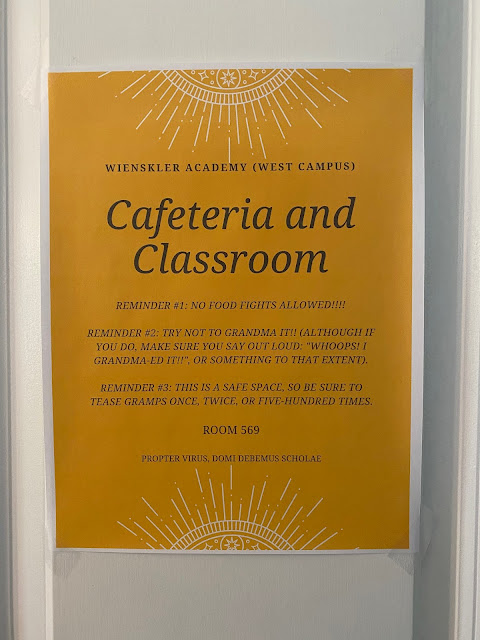 The 7th grader and 9th grader alternate between the other classroom and the gymnasium/classroom depending on which one has a P.E. class that day. 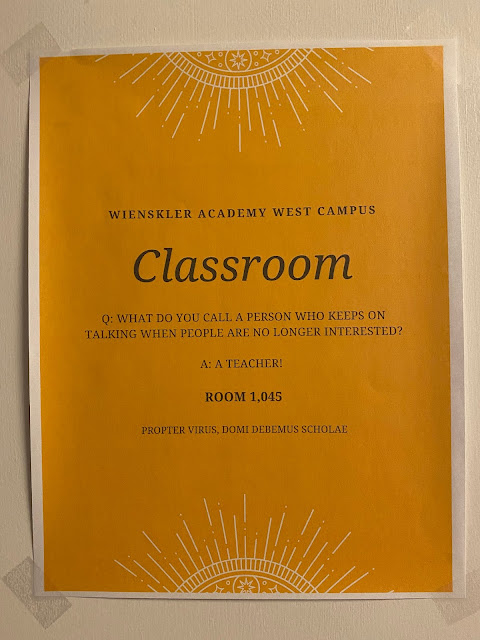 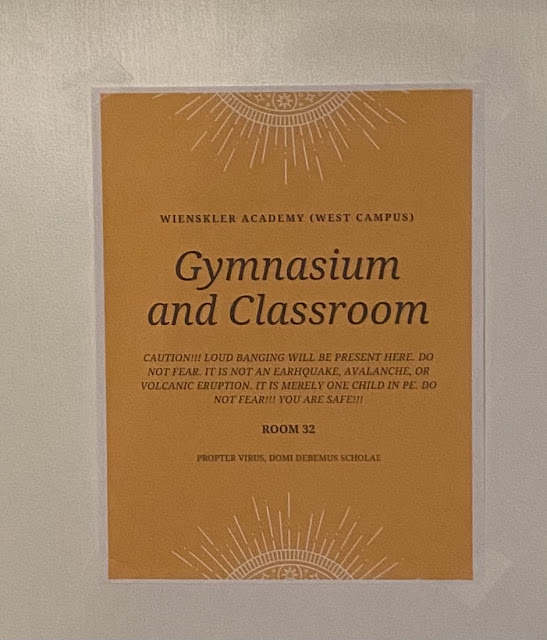 The other night we photographed the final entry for my hopeful 2021 calendar, Quilts and Classics. It was a beautiful maroon 1937 Ford. I posted some pictures on Instagram and it has gained some traction, nearly 1000 likes! It's always a mystery to me how some pictures go by completely unnoticed, and then all of a sudden a lot of people see some random picture. Algorithms...who can figure them out? Anyway, someone (whom I don't know) posted this to their Stories, which was very kind. 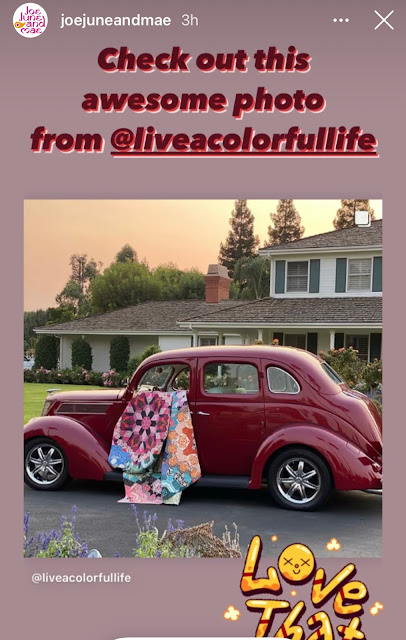 and the son of the car owner made this fun rendering of one of the photos. 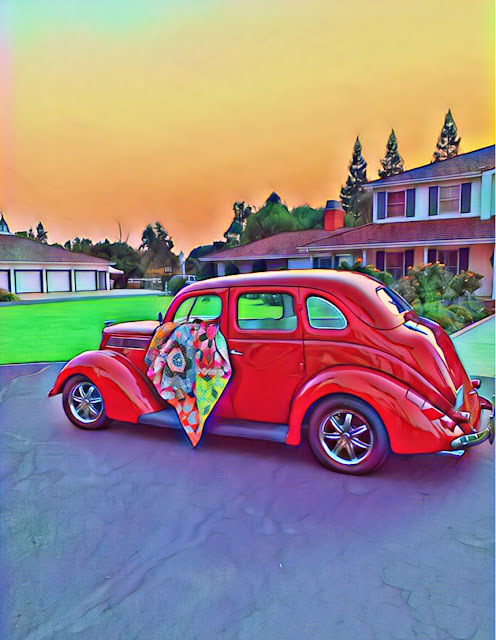 This has been a dream for a couple of years, always a dream. And I didn't really have to do anything about it because I didn't have all the "elements" to make it a reality. But now I have photographed 12 quilts with 12 classic cars and it's full steam ahead. I'm nervous. I don't have any big expectations for it. The car owners of course will get a copy, as well as friends and family. I would love to sell a couple but have no clue how to even market it. But sometimes a dream is NOT about dollars and cents, it is just about personally fulfilling something.
Do you remember when too much coffee was considered a risk to developing breast cancer? Well, now it's considered somewhat beneficial, that is if you drink five or more cups per day. I'm not going to admit whether coffee is beneficial to me or not. 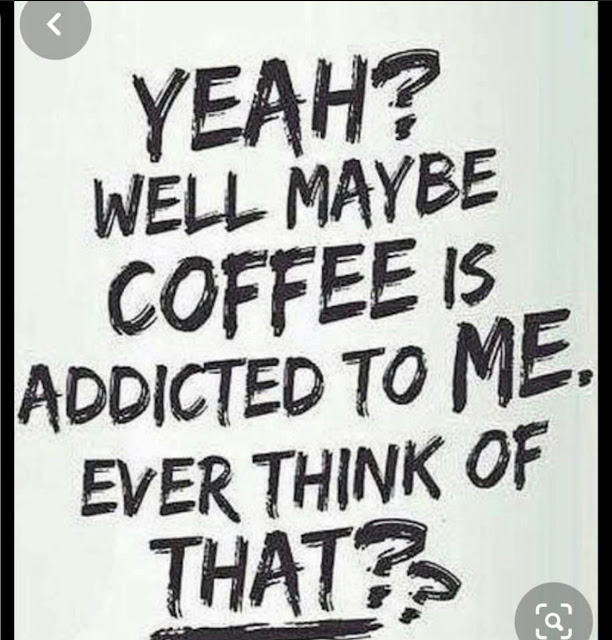 This has been a long post. Thanks for hanging in there...
I'll conclude with this. Which may or may not also be true. 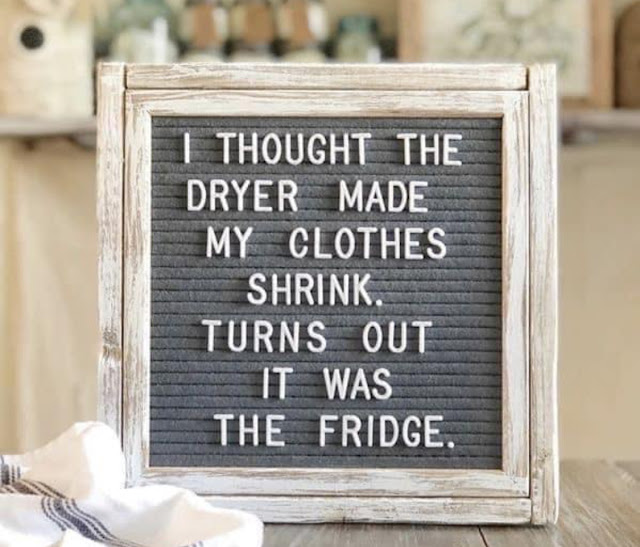