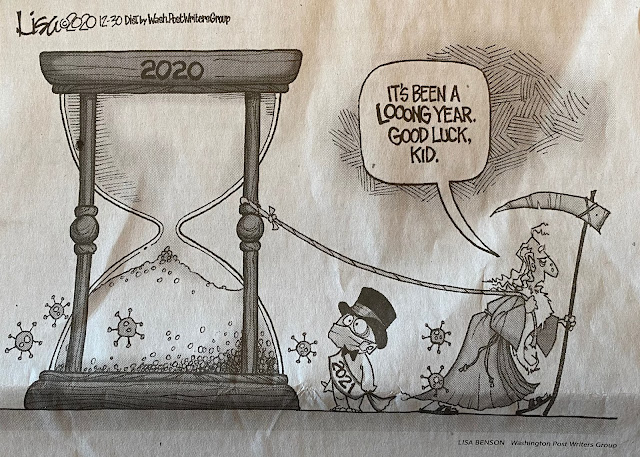 Did you think this day would never come? As I've mentioned many times before, this year has seemed to drag and yet speed by simultaneously. And here we are on the cusp of a new year, full of possibilities. It's weird to look back at this day in 2019. So many people choose a "word of the year"--hope, focus, creativity. Who knew that what lay ahead would be something not seen in the last 100 years?

We mourn for all the lives lost, we hope the vaccine brings our world (that is what often boggles my mind--that the entire world is struggling) to at least the beginning of a more "normal" life, although I doubt that life will ever be as we knew it before the beginning of 2020.

In the meantime, just a little recap of the last week of 2020 in the Wiens household.

So....Christmas. We are not big gift givers. Our big family "gift" is a couple of days at the coast right after the New Year, a tradition we will once again enjoy since we are in the same "bubble." But I digress. Buying gifts is not the holiday activity that causes me the most stress. Not by a long shot. It is figuring out the annual Christmas scavenger hunt. Seriously.

Years ago, my dear friend, Dotty, told me about the scavenger hunt she organizes each year for her grandchildren to find their gifts. I thought it was such a genius idea that Mark and I started having a scavenger hunt each year as well. The kids love it. It brings me more stress from Thanksgiving until Christmas trying to figure it out. Christa has told me multiple times that we don't have to do a scavenger hunt. But I think she forgets that the kids start asking about it as early as Thanksgiving! So...not having one is simply not an option. Our grandchildren range in age from 14 down to 7. The hunt must be hard enough for the two older ones, yet easy enough for the two younger ones. There was one year we had to come up with two sets of clues. Doubly stressful. 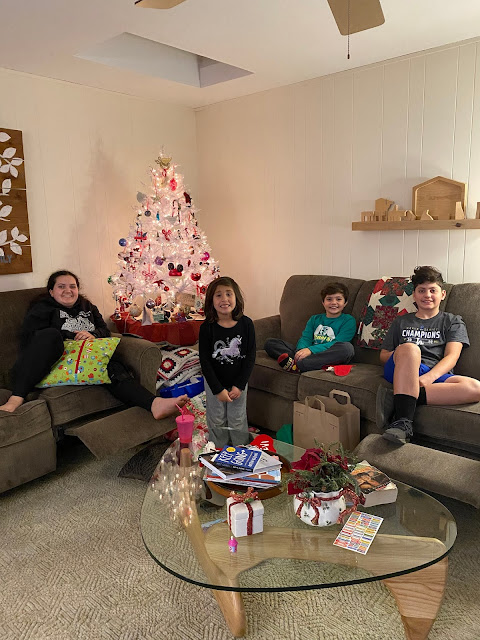 Waiting for the hunt to begin...

This year, early in the month I read somewhere about stringing yarn throughout the house and making them follow the yarn to find their gifts. Four sets of yarn? At first we thought, bingo, that's IT! However, neither of us could sleep Christmas Eve thinking about the logistics of that.  At 3 a.m. Christmas morning I was busy googling scavenger hunt ideas. I found a site that had riddles (rather than rhymes) and so at about 3:30 a.m. I purchased it. At breakfast, we both said the yarn idea was garbage. I told Mark about the riddles and so here we were hours away from the "hunt," trying to figure it out. I mentioned that it was too bad we hadn't saved some toilet paper rolls to write the clues on, because that would be appropriate for 2020. Right? Mark reminded me that he uses toilet paper rolls to keep his electrical cords in order. We rounded up a couple, including a paper towel roll that we cut into thirds, and commenced writing clues on them. 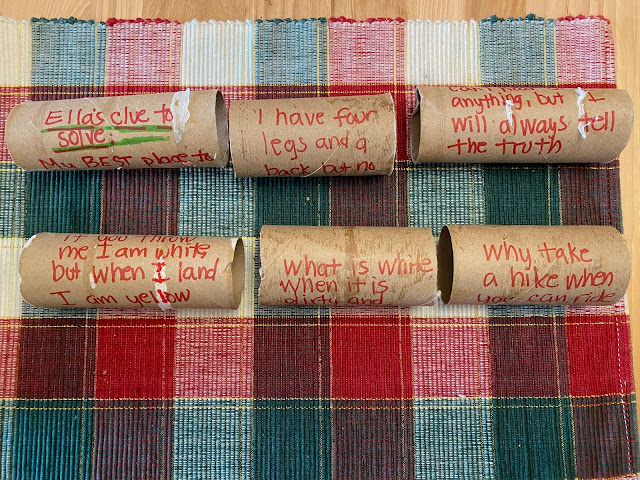 We wrapped the first clue in some toilet paper and put it in a bag. 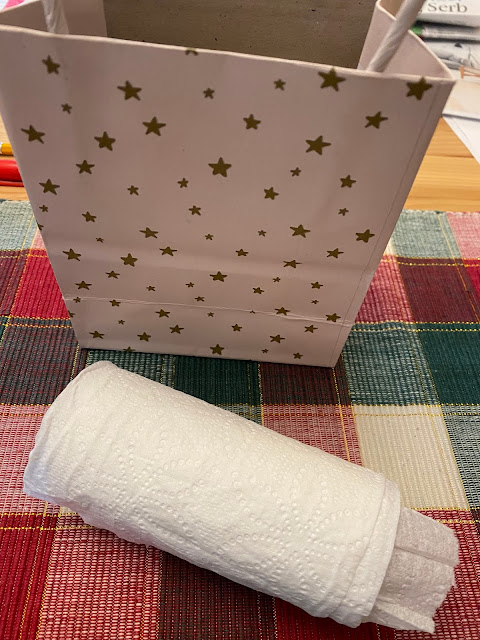 We told the kids they would have to work together as a team, and that the final clue was Ella's to solve: "Ella's favorite place two days a week," which is pretty much a joke--we hid all the gifts under the desk she uses for the two days she has school at our house--and it is most definitely NOT her favorite place. Ha!

We hid them behind a bunch of quilts. 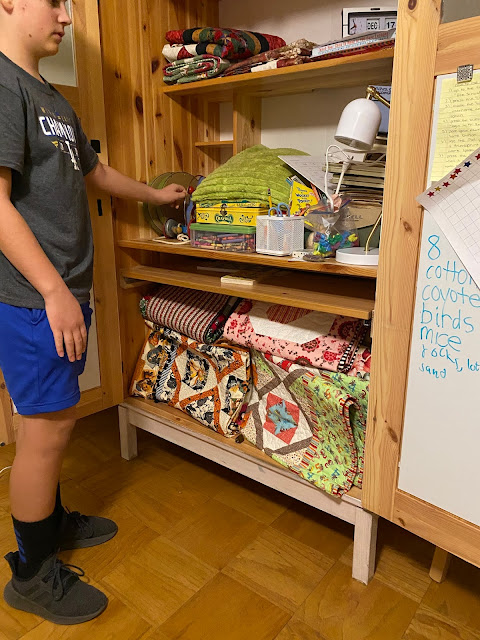 Levi even reached behind all those quilts and actually touched one of those bags, but then said, "Nope, nothing here," before we told them all to go back and have a closer look.

All in all, they said it was their favorite scavenger hunt to date. So much for last-minute planning. But I don't want to cut it that close next year, that's for sure!

We had a delicious dinner. Aaron smoked tri-tip on his Traeger, Christa made potatoes, broccolini and bread, Mark made homemade applesauce, and Charlotte made individual cheesecakes with cherry topping. 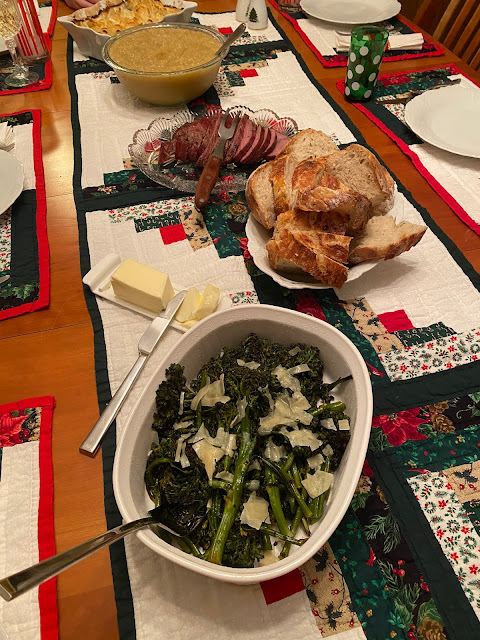 Our dishwasher is broken (thanks for that, 2020, although I realize a broken dishwasher is a First World problem), so Christa and the kids took care of the dishes. 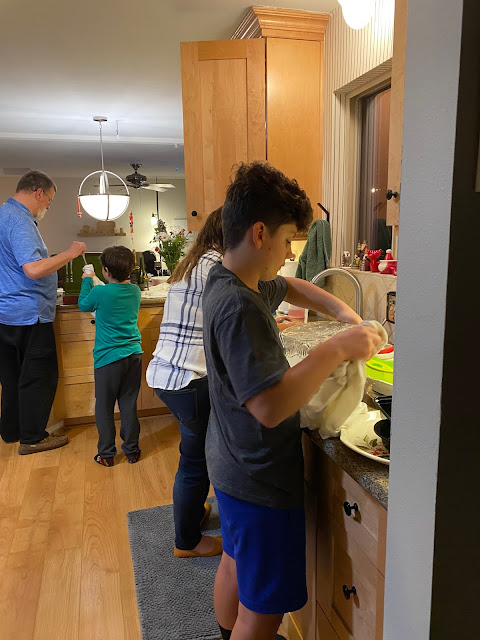 New Christmas pajamas (not sure where Charlotte was at this point). 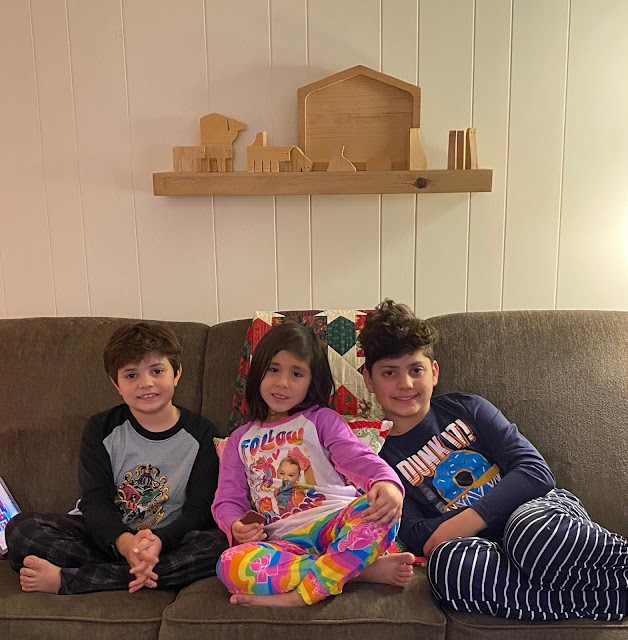 Aaron wrapped up the Oculus VR that we got the family back in September as an early Christmas present, as a reminder that it was a Christmas gift. :) 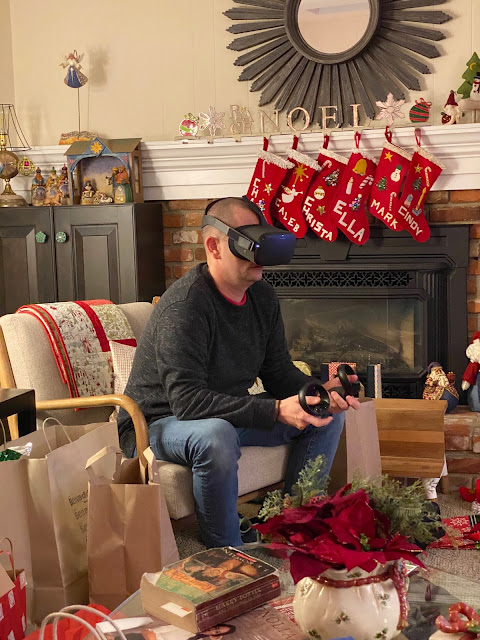 It was a fun and relaxing Christmas celebration, and we are grateful that we could spend it together. 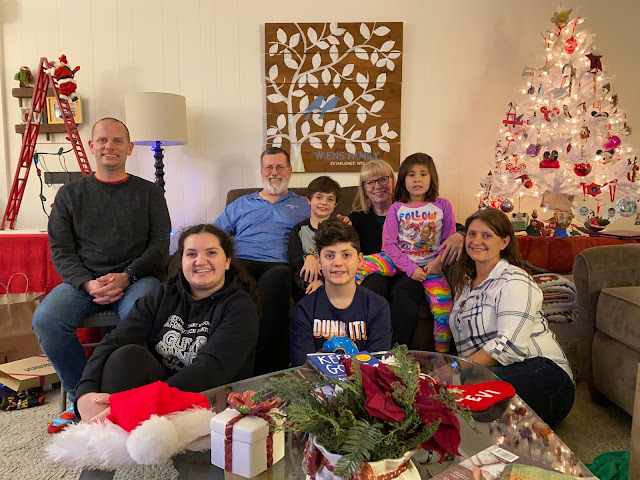 In the last week, I have been going through drawers and cabinets like crazy. I could feel the decluttering feelings starting about mid December. Lots of things were donated to the thrift store (lots of games, and collectibles, like glassware and dishes, that are a thrifter's dream find) and lots of things were tossed (old cosmetics--who even wears makeup any more??). I still have clothing to go through and the ongoing sewing room organization, which seems to be never ending.

Our New Year's Eve celebration was different. We couldn't have dinner with our friends at a local Chinese restaurant, and then go pick up Ella to spend the night while the rest of the family spent the night with their friends and stayed up until midnight. Nope. None of that was happening. So instead we dressed up--at least from the waist up (we wore our comfy sweatpants), got some Chinese take out, put our kitchen table in the family room, lit a candle, and watched some movies (Soul--not a huge fan, Trading Places--always a good choice) while eating. It was a good way to end the year. 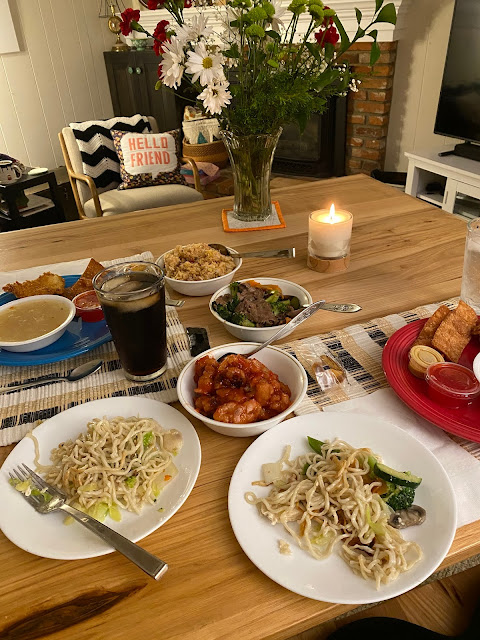 Thanks to all of you who have read some of these posts throughout the year, and especially those of you who leave comments. What used to be primarily a quilting blog has become more of a weekly diary of what's happening in my family, so I appreciate you so much. I realized as I wrote this that there are at least five quilts I finished in 2020 that I never even posted about. So here's to hoping that 2021 will be a return to quilting as well.

I am one of those that never comments - but I love reading about the family and dealing with your everyday life. I just retired yesterday, 32 1/3 years with the State of Nebr, so now I will try to find new routines. Seeing you all deal with your Every Day is quite delightful! Thanks!

I always enjoy your blog posts. The tidbits about your lives, the children and activities, the school, quilting, glass making, all of it. Please don't stop. It would feel like I lost a good friend. Happy New Year to you and yours and hoping for a better year.

I read all of your blog all the time. I can so share your feeling of your game on Christmas. With our children and grandchildren we always play a game called Mr. and Mrs. Right, you can find all different ones on line then one year I thought it would be fun to make up my own with everyone's name included. Little I know it would such a hit and now I find myself having to do it every year. I usually end up trying to come up with something at the last minute. That is after laying awake half the night writing it in my head. Please keep up the blog and the pictures. You have a lovely family.

Love the scavenger hunt idea but I can see how it could be stressful. Keep writing and I'll keep commenting. I love knowing what's happening in Cindy's world. Hoping to revive my own blog in 2021 too. Wishing you and Mark the best in 2021!

I so appreciate your keeping friendships and connections alive when you share your life with us. God bless the Wiens family!
I enjoyed a bit of a scavenger hunt myself, finding quilts and other projects in your photos. 😃

It's been a while since my kids were scavenger hunt age but I remember how much fun they had. We had a Klutz book that had many different preprinted clues you could tear out. Some for pre-readers and othersore complicated. Here is the link: https://www.amazon.com/dp/1570545685/ref=cm_sw_r_cp_awdb_imm_t1_A4k8FbF9BAC1Q

I’ve always loved the scavenger hunt ideas you create. The TP rolls were perfect for this year. I’m trying to imagine 30 grandkids roaming through my house on a scavenger hunt. lol. I hope that you enjoy your coastal trip soon. Happy 2021 to you and your family, Cindy.

Loved your post and hope you get round to posting pictures of those 5 quilts.

Your family time together sounds like great fun! I used to organize a treasure hunt for our two kids too, when they were still at home. Always $$ at the "end of the rainbow." :-) What you worked out sounds perfect. It's good to have a blog as a record, isn't it? I especially enjoyed recapping the year, looking for the positives of which there were many. Thought I'm not overly optimistic about what 2021 has in store - for now it's a continuation of 2020 - I'm very hopeful. Hope is a good thing.

I hardly ever(ok almost never) comment but I read every post. I really enjoy what you write about; your family, crafting, the places you go and funny memes and jokes. You write well and so richly that reading your posts always make me feel better. So thank you for continuing with your blog. I usually do a treasure/scavenger hunt for my sons at Easter with a gift at the end and little eggs hidden near the clues. The last one was all different codes they had to crack to get the clue to the next location. Very well received and although they are young teens, "Easter Bunny" has been asked to come back next year. Happy New Year!