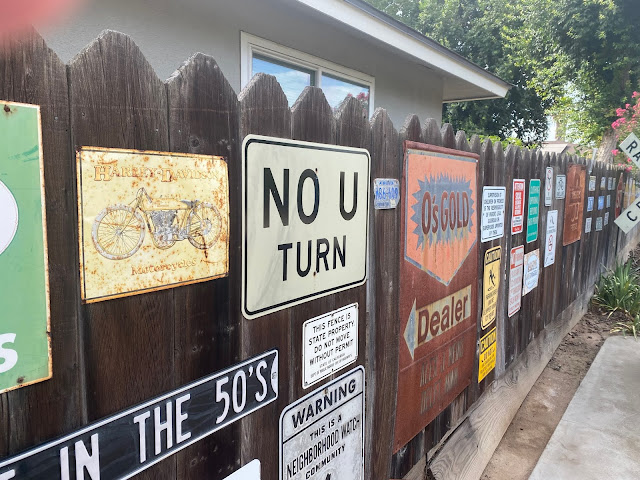 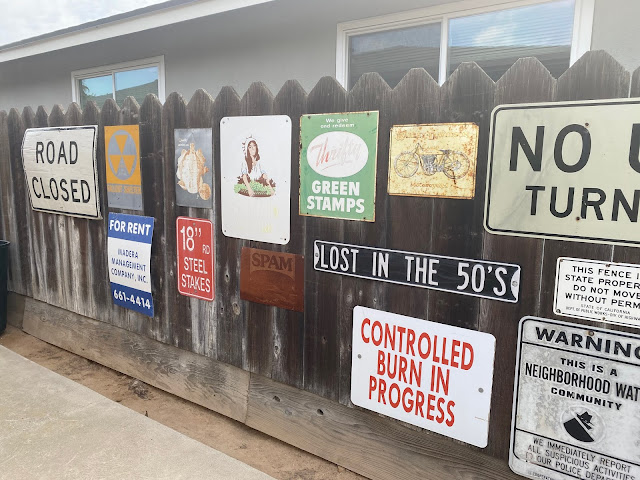 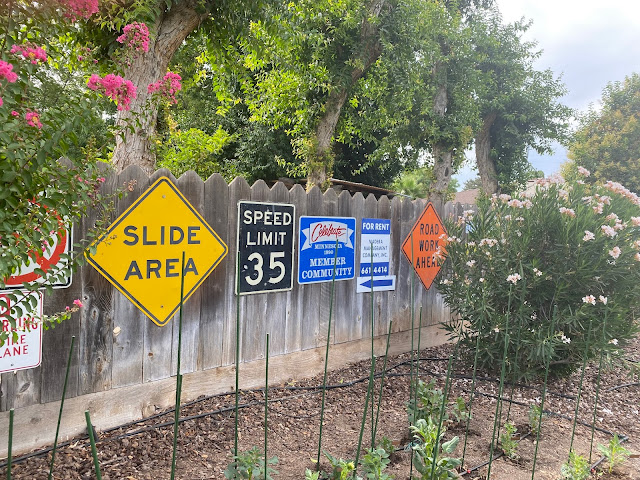 We have a collection of signs on part of our fence in the backyard. We recently added to the collection, and I thought it might be fun to look back at some of the signs already there.

This is the sign that started the collection. It belonged to my Uncle Ernie, who was a farmer and probably used feed from Albers. Mark purchased it at an auction. 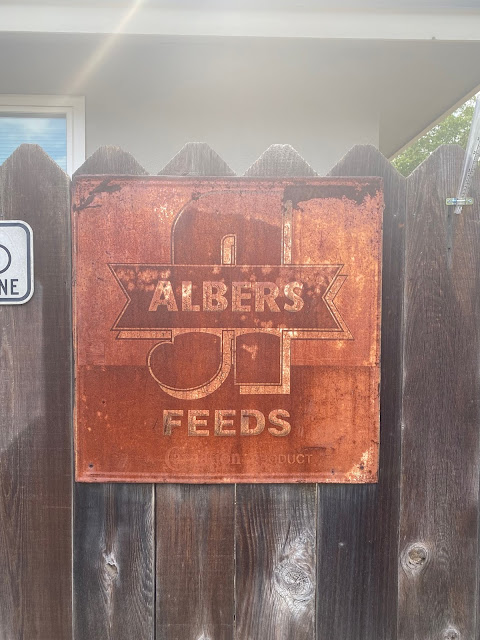 Signs have come from different places--auctions, antique stores, one or two from Ebay,  one or two from someone's junk pile during city clean-up.
This stop sign came from a store in San Francisco. When the city would remove old signs and replace them, the old signs would go to a store at the end of Pier 39, and proceeds would go to a women's shelter. Aaron grabbed the stop sign for his dorm room in college, although he was not allowed to hang it in his room without proof of purchase. 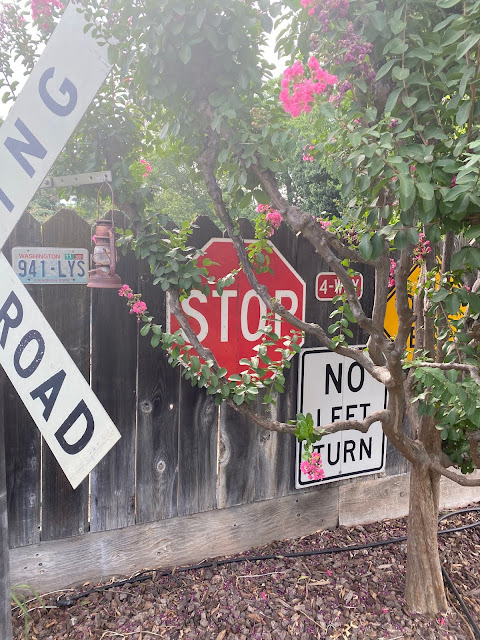 The railroad sign came from a local antique store. 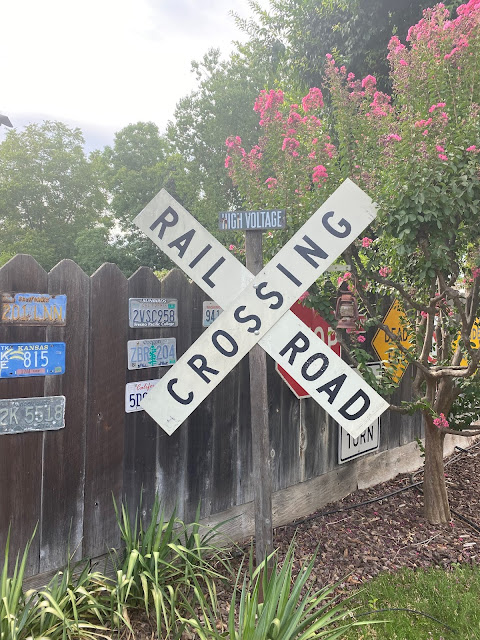 We have a few old license plates. 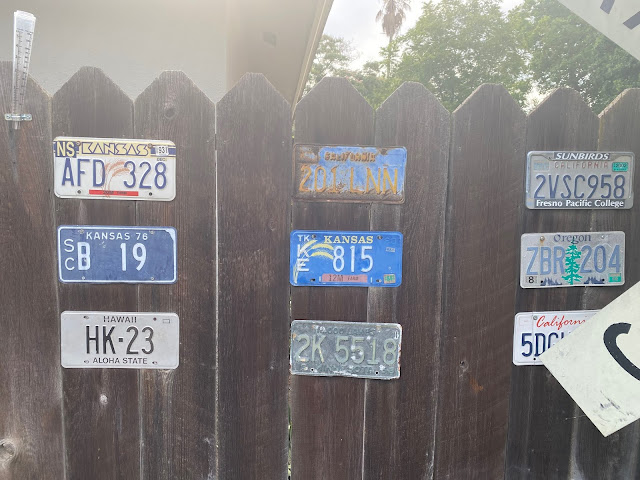 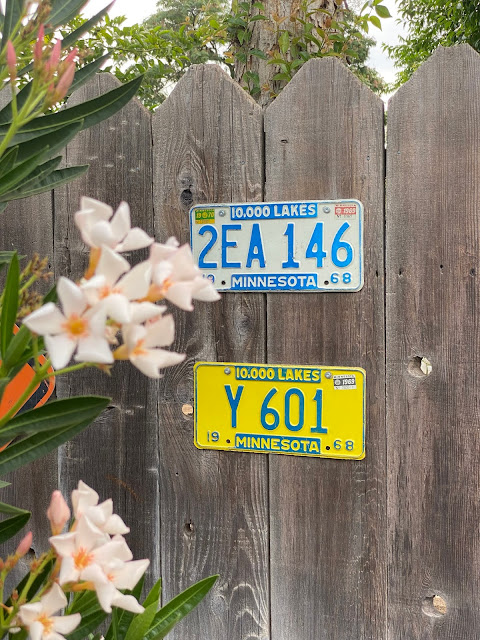 This one has an interesting story. First of all you need to know that more often than not, our last name, Wiens, is misspelled. It is pronounced "Weens" so it is often spelled Weins.
We were visiting Mark's family one summer and driving around on a Sunday afternoon when we noticed this sign outside, and a guy standing nearby. We stopped and Mark told him that our last name was Wiens, and offered him $20. The guy apparently thought we might be related to Alex because Mark was able to snag this really large sign for such a small amount of money. You will notice that it IS spelled incorrectly... 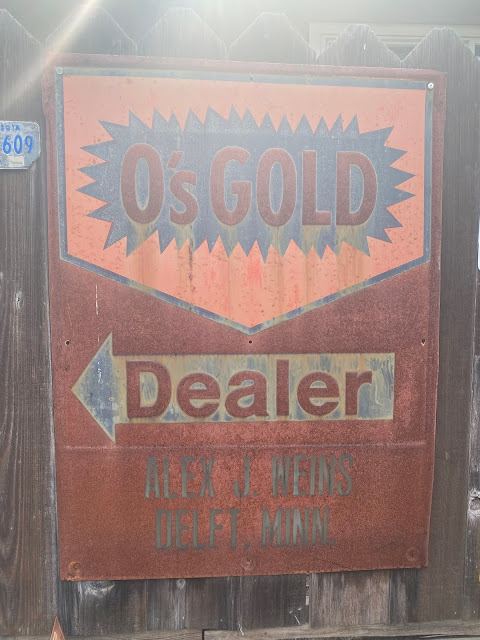 Haha. We never have thin ice... 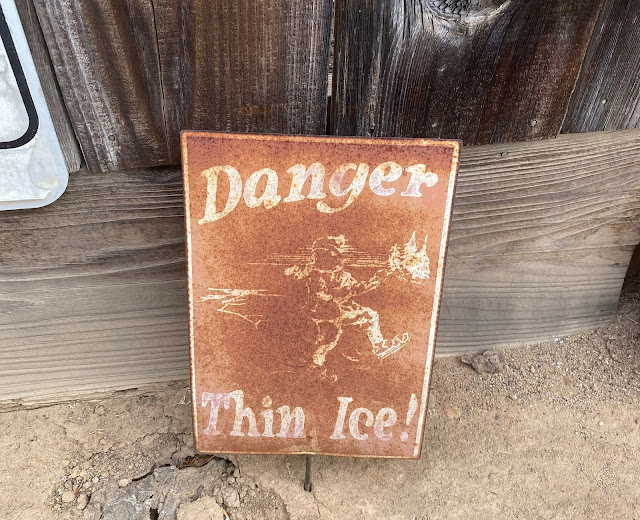 This is from Minnesota. The mosquitos don't pay attention to this sign there, nor do they pay any attention in California. 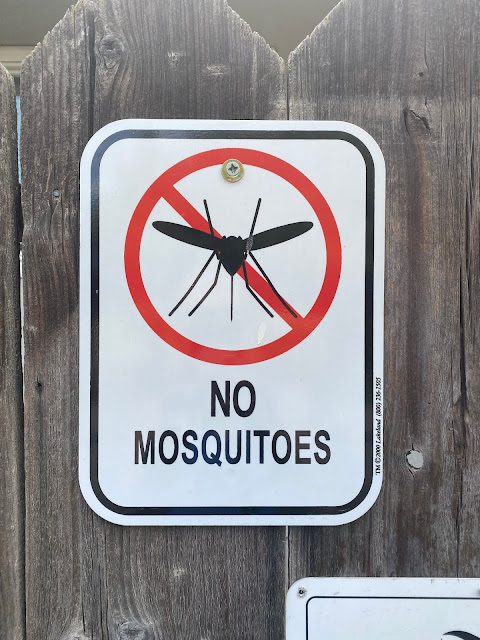 We got the Eugene/Milton sign at an auction. We have looked and looked. We have no idea where this is from. We thought Milton might be a small town near Eugene, Oregon, but nope. Maybe that's why we were able to snag it. We also do not know the first name of the Wiens running for state senate, but he or she was for all of Minnesota. :) 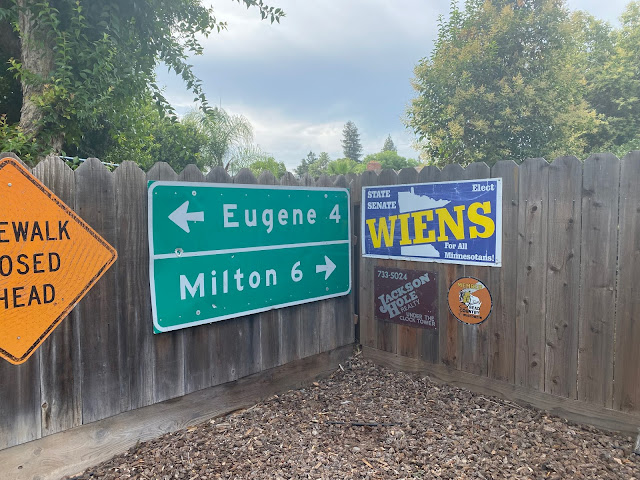 You gotta love an official sign with a misspelled word. 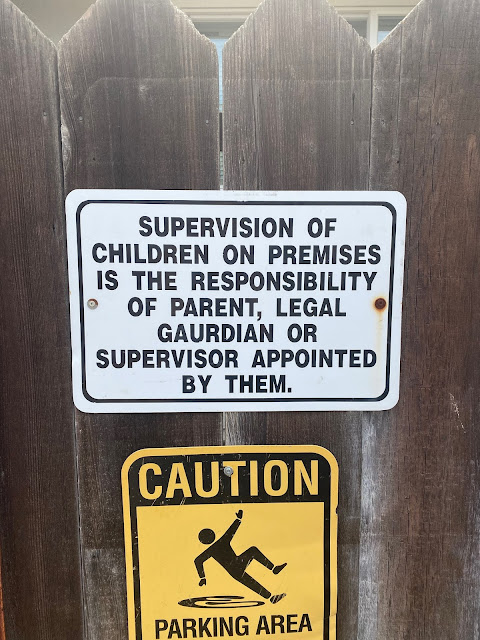 This is probably my very favorite sign, also purchased from the store on Pier 39 in San Francisco. It makes me really wonder where this sign was posted... 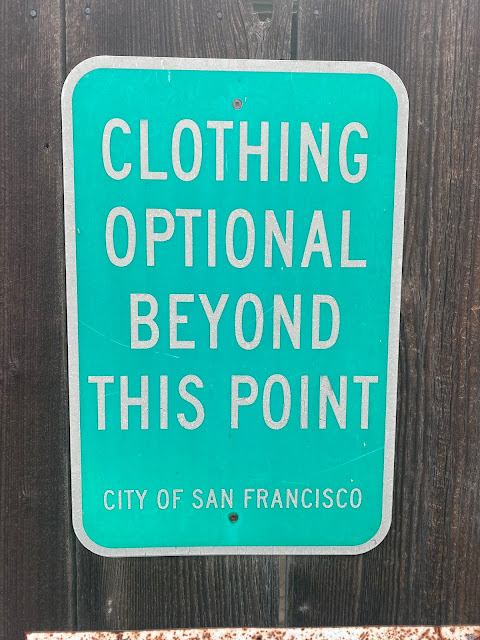 And in honor of the past year. As if we would ever forget... 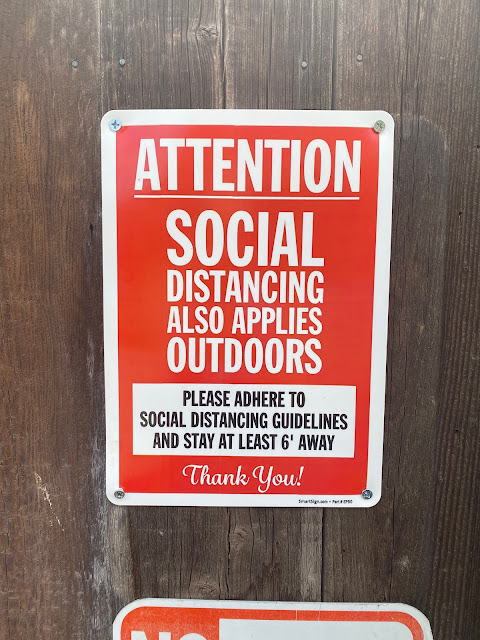 Aaron and Christa are redoing their swimming pool. This required jackhammering and chunks of concrete that needed to be removed. Aaron had done his share of working the jackhammer the night before, so this happened the next day while he was at work. A friend ran the jackhammer, and Mark, Christa and Levi removed concrete. I provided breakfast burritos. :) 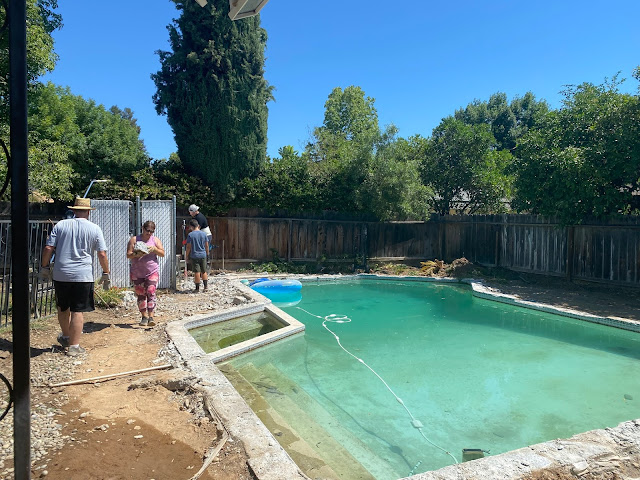 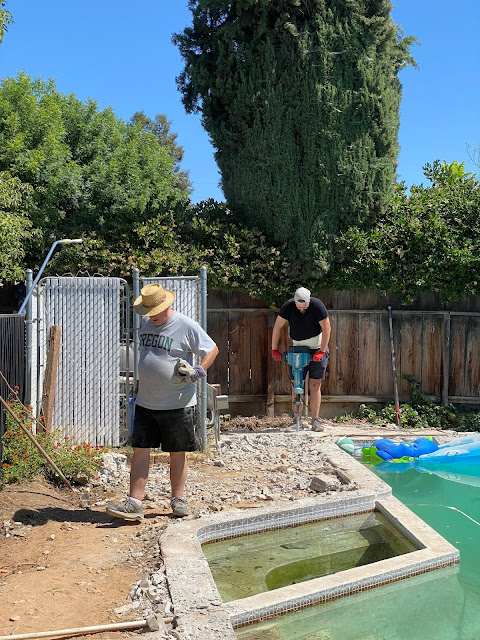 When the pool was finally drained, we followed the water to see how far it went. It was actually a couple of blocks before it emptied into a drain. But along the way we spotted this little guy. We have never seen a falcon (at least I think it's a falcon) in the neighborhood before so this was kind of a treat. 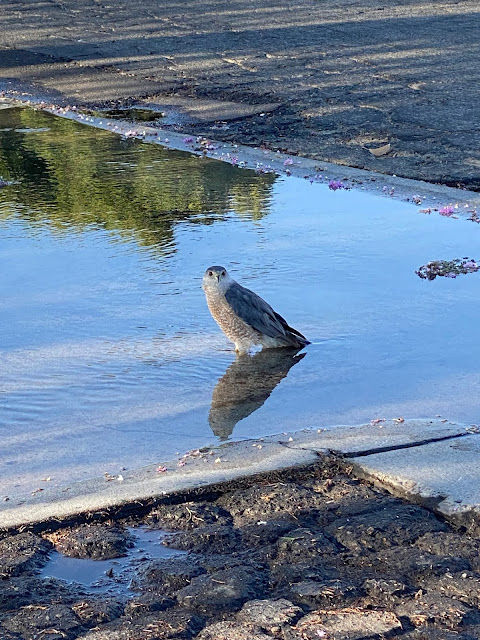 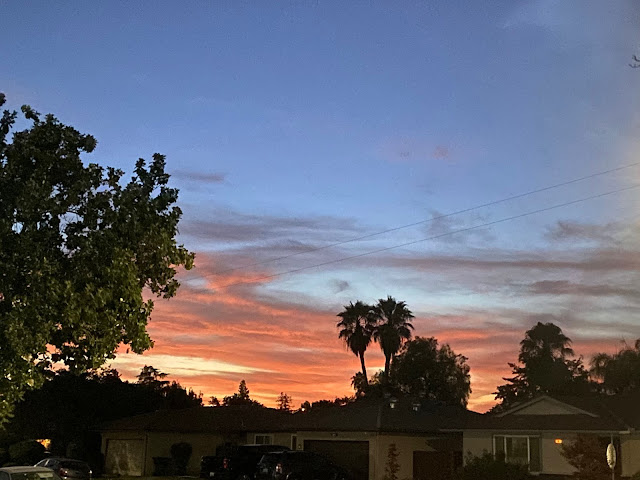 A week ago Sunday, we were in a lunch meeting at church after the morning service. A guy who used to do our yard came up to us and said, "You might want to go home and check to make sure your house isn't on fire." Um, WHAT??? We live just a couple blocks from church so I got in the car and drove home. On the street before ours there were two fire engines and the battalion chief. I could tell that our house wasn't the one on fire. But nevertheless, I turned down our street and this was in front of our house. The fire was burning shed in the yard kitty-corner to us, and the firemen were attacking the fire from two sides. 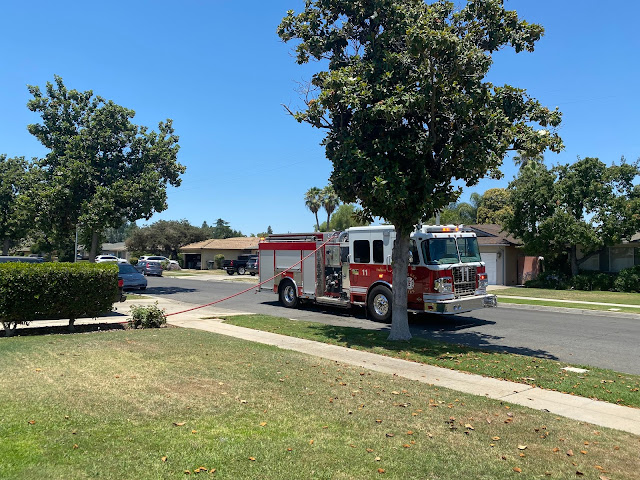 When I arrived there, the fire was mostly out and there was just some smoke remaining. The neighbor next to us was the one who called it in. This is what it looked like at its worst. So scary. The homeowner was not home at the time, so it's a good thing that (a) our neighbor was home and (b) firefighters were even available--they have been swamped with the July 4th fires, grass fires, etc. 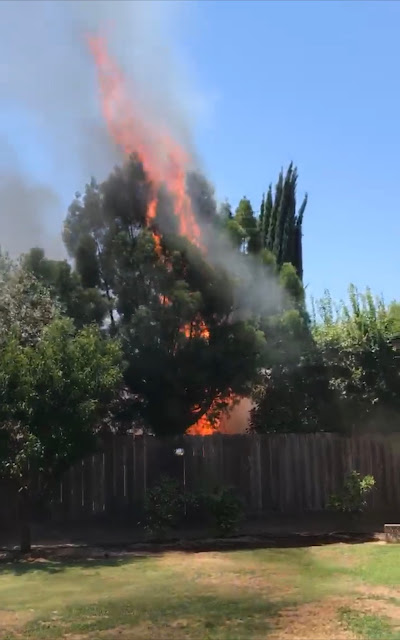 I bet you are wondering what caused it. The owner of the house is a contractor. He had been refinishing his deck and had left a brush to soak in some paint thinner. In the sun. With our heat, it got so hot that it started on fire. Which is a good reminder to all of us doing DIY projects at home. It could have been devastating. As it was, he lost his shed and a lot of his tools melted.
I've still been sewing, Summer Sampler blocks mostly, from 2019 and 2021. 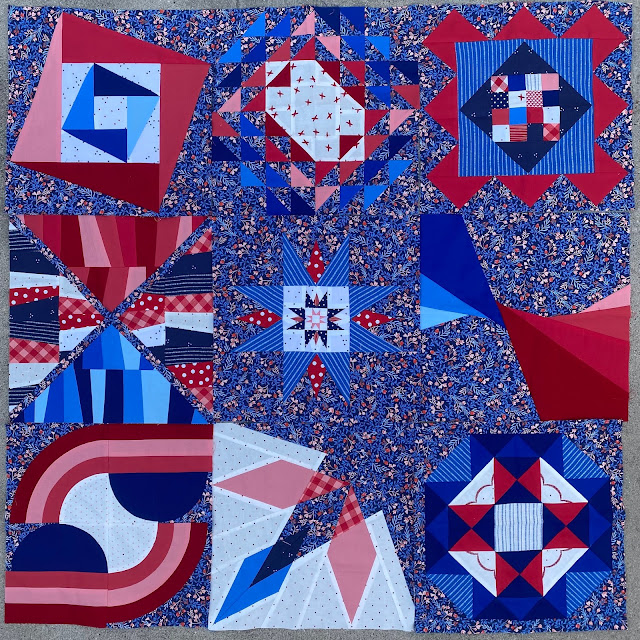 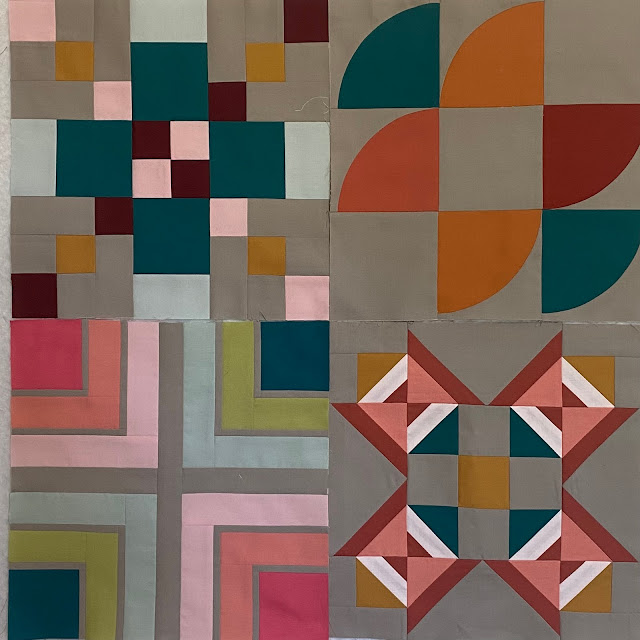 I took a little detour from sewing and did some book folding. I used a thrifted book, and beyond that it takes a pattern ($5 on Etsy), a metric ruler and a pencil. And some time... 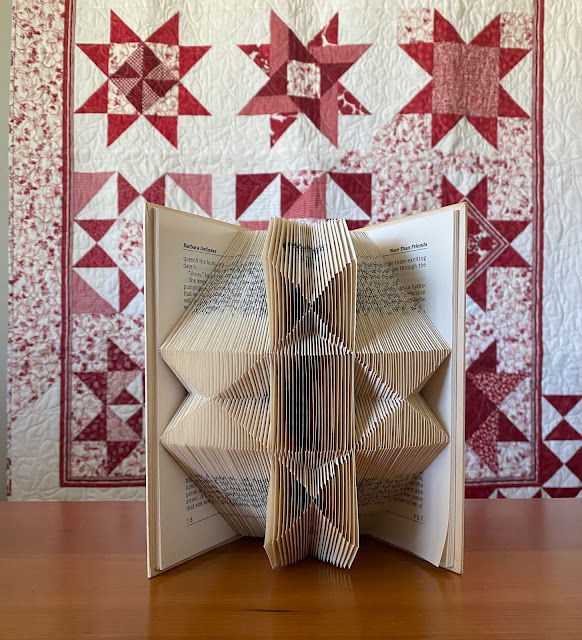 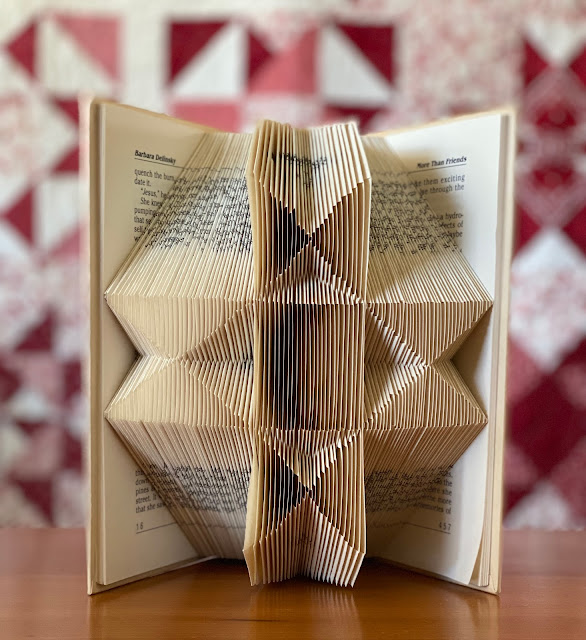 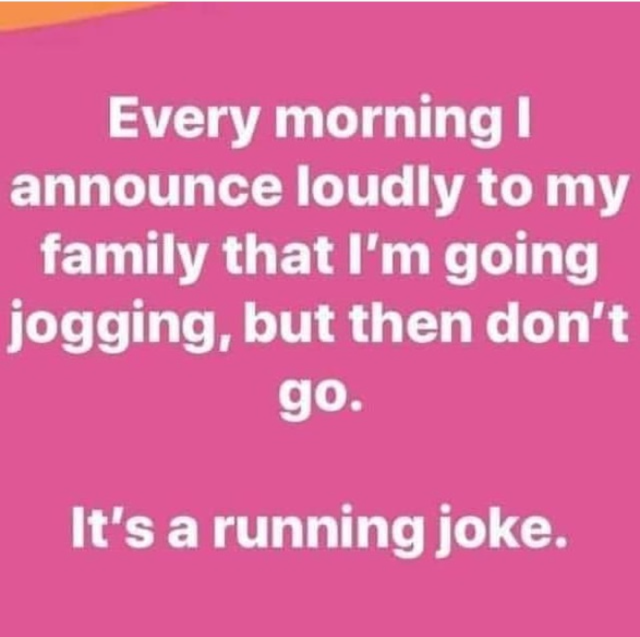