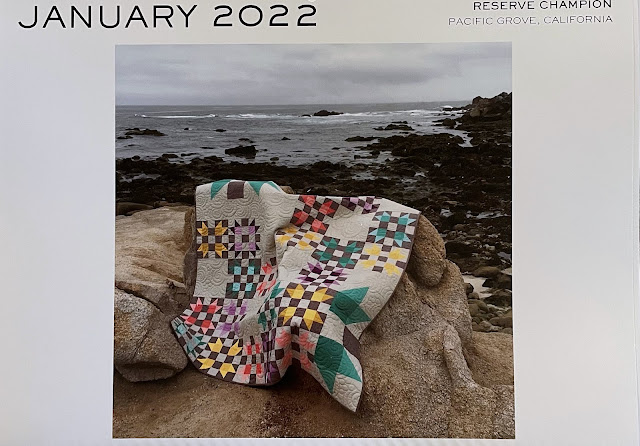 I can hardly believe I'm doing the behind-the-scenes story of a second quilt calendar! This time around, all the quilts were photographed by water, most by the ocean, but not all.

Reserve Champion initially began its life as part of a series by RJR Fabrics called What Shade Are You in order to promote their line of solid fabrics. I was contacted by the fabric company and was able to choose 12 fabrics, design a quilt, and be part of their blog series. 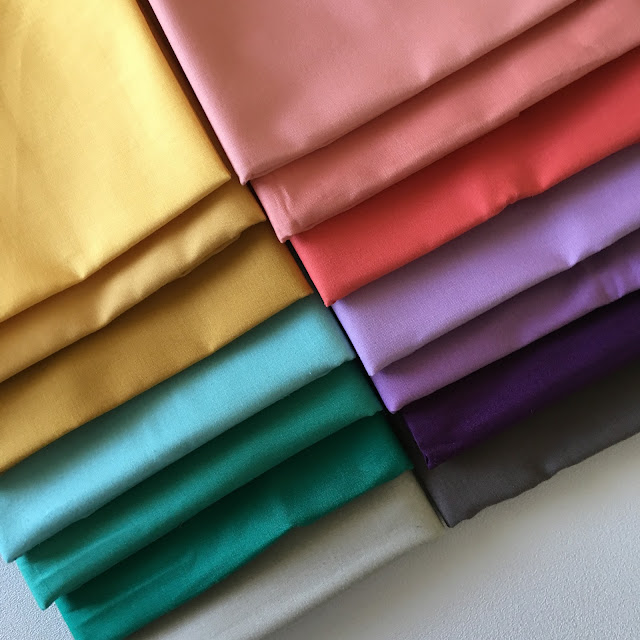 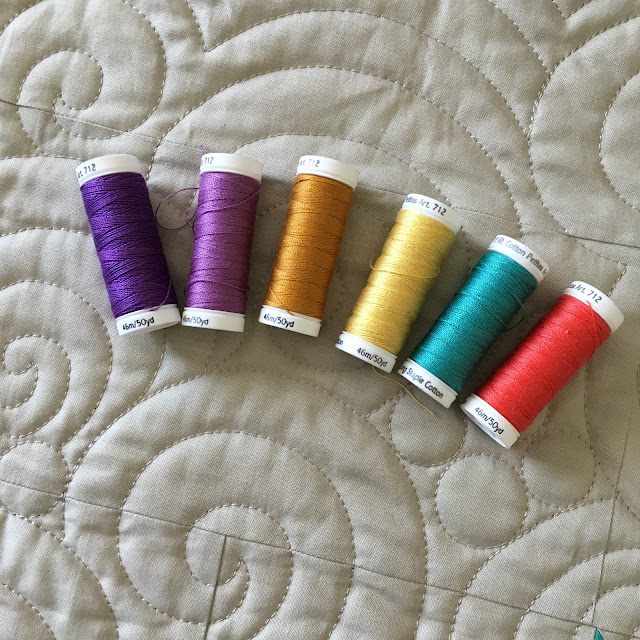 Reserve Champion was inspired by a quilt in a magazine--a completely different block design, prints not solids, but all the blocks were in three different values of four separate colors. I don't remember anything more about the photo, but I liked the idea so I chose the block and then submitted my color choices to RJR.
I chose the Sister's Choice block as it worked very well with two colors per block, and then alternating a dark and light background color. I decided I wanted a bit of "negative space," and then came up with the idea of enlarging one of the blocks. It didn't fit into the design as a whole block, so I decided to use halves of the block in two different locations.
I have never successfully learned how to use a quilt design program like EQ8, mostly because I don't sell my patterns and therefore don't want to spend the time to learn, so graph paper is what works for me. 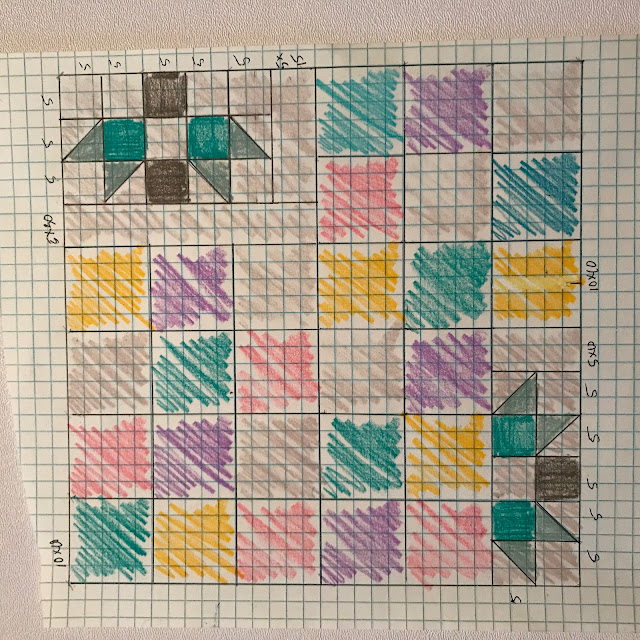 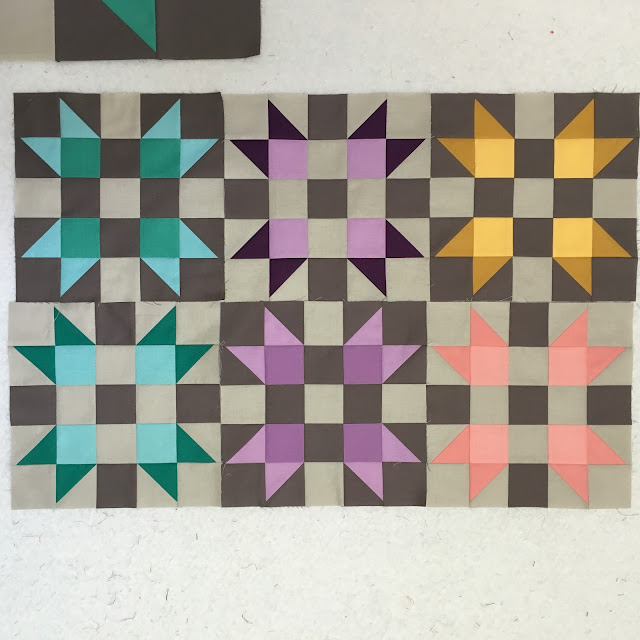 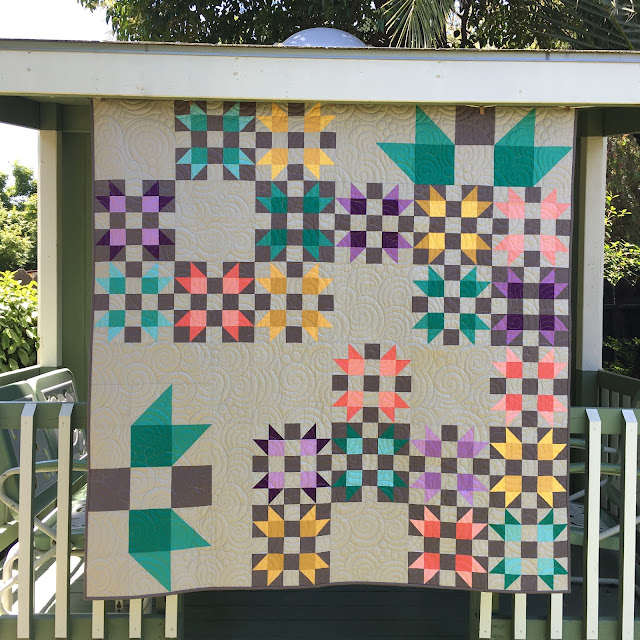 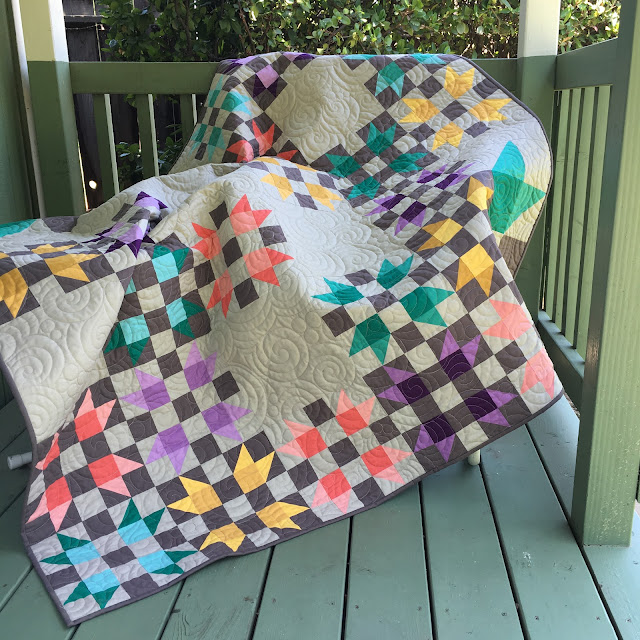 For the backing, I decided to make a complete version of the largest block and add two practice blocks. 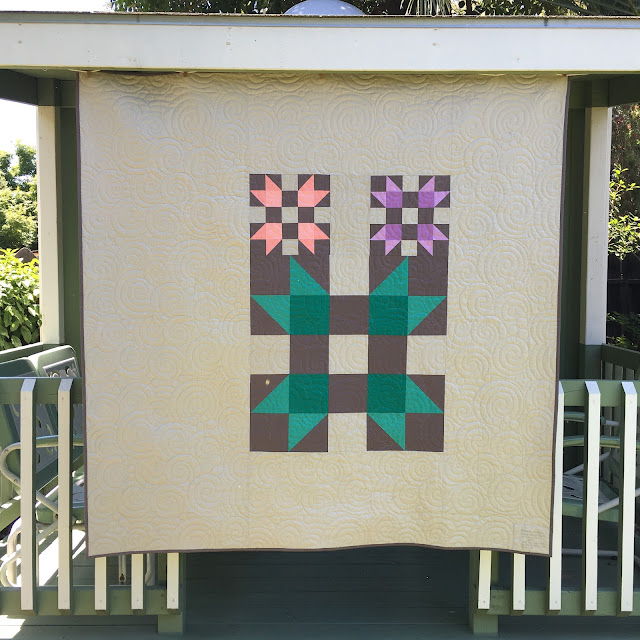 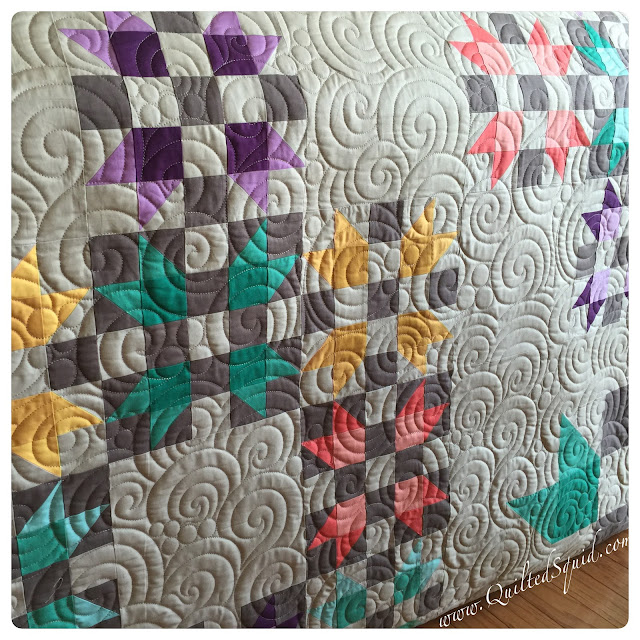 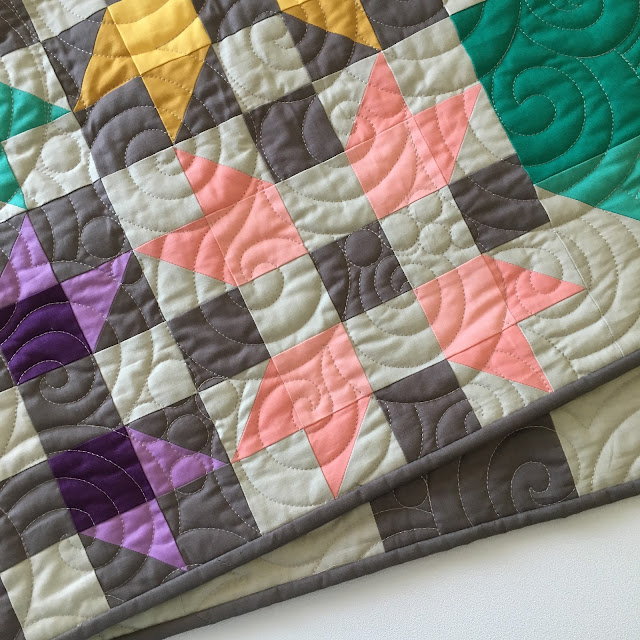 After all this, I decided to attempt a magazine submission. It appeared in the Winter 2017/2018 issue of Quilt Festival: Quilt Scene. 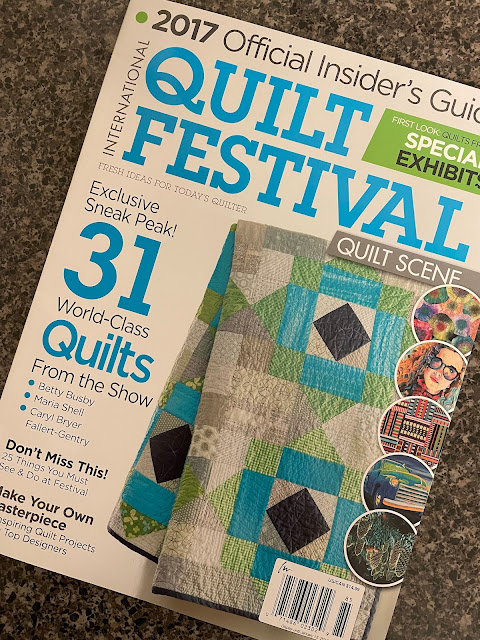 At this point, I worked with good friend, Mike Klaassen, to do some graphics for the submission. We joked that this really expanded his resume--appearing in a quilt magazine! 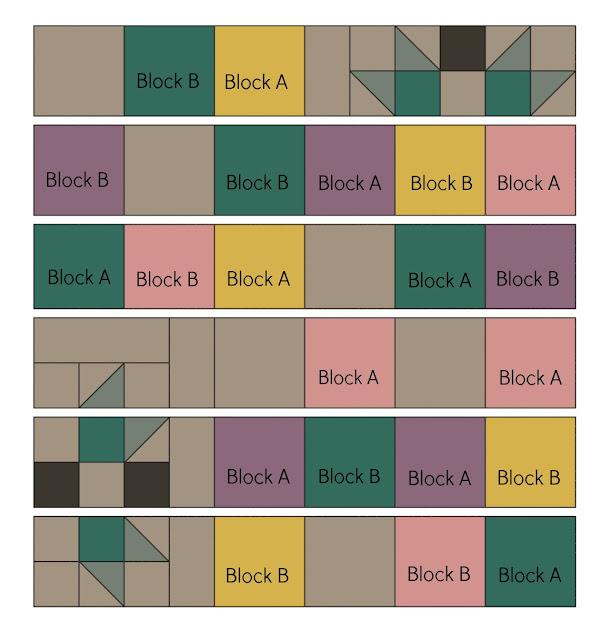 I was also contacted by Modern Patchwork, who had published some of my other quilts (unfortunately no longer in publication--and it was one of my favorites) to write an article about making two-sided quilts. Reserve Champion (along with another one of my quilts) appeared in the November/December 2017 issue. 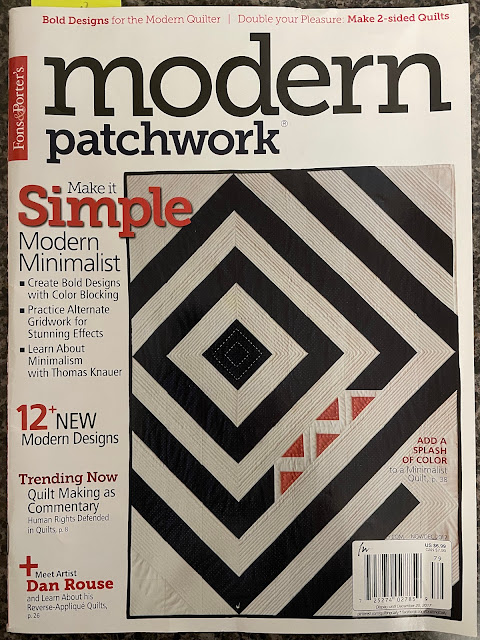 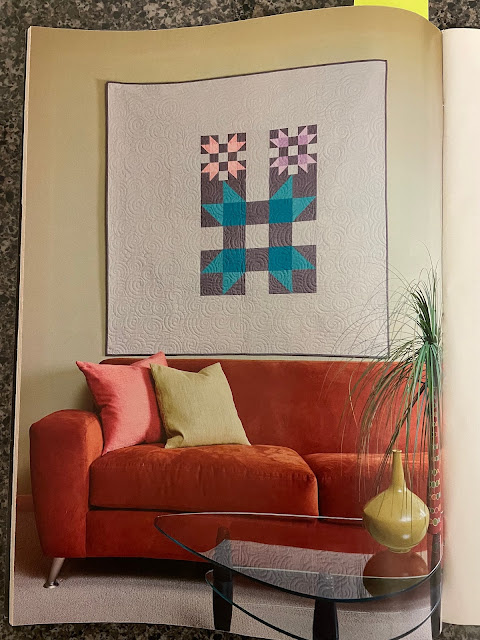 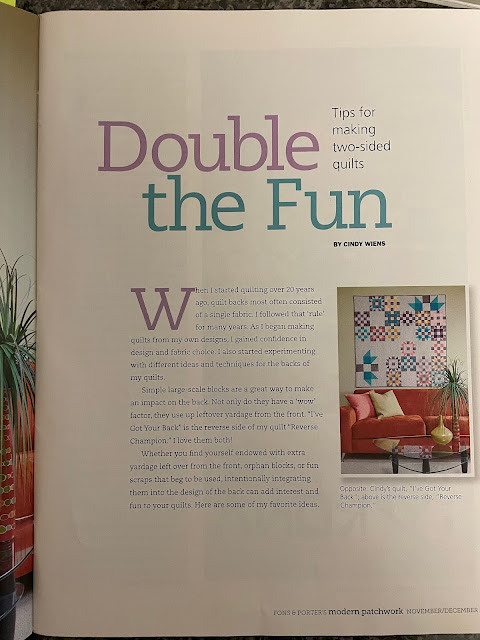 At the time we photographed the quilt by the coast, making a calendar was not even in my thought process--in this photo you can see a bit of the towel I placed under the quilt so it wouldn't get too sandy... 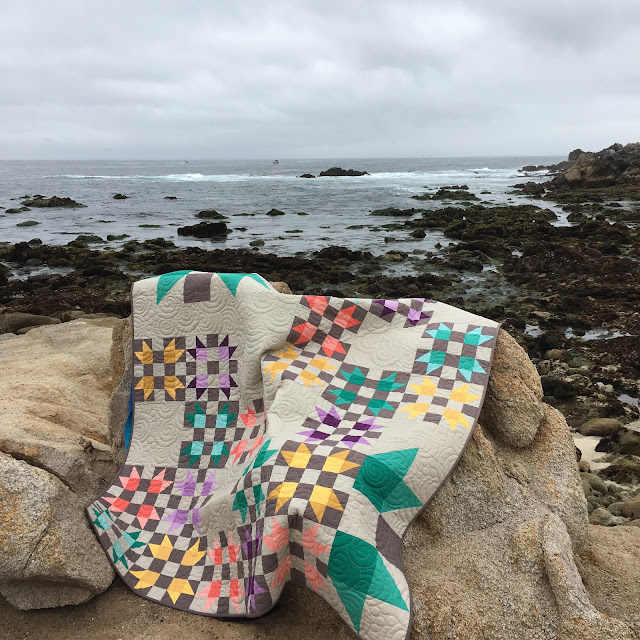 The story behind the name:
I enjoy naming quilts. And sometimes the names end up being a little obscure and only make sense to me. The name of the block I used in this quilt is Sister's Choice. I don't have a sister--only one brother. I tried finding a block that would work and have the word "brother" in it but I couldn't find one. My brother works for the federal reserve in Washington, DC. For some reason, "reserve champion" popped into my head. The definition of reserve champion is basically a runner up, in case the winner is disqualified. Obviously that has no relevance to this quilt--it is really just a shout-out to my brother who works for the federal reserve and wins the prize for being my only brother. I have never asked him if he considers that a prize or not--ha ha!
It is a good exercise for me to write the history of these quilts as I often forget parts of their history--like the RJR blog hop.
Quilt: Reserve Champion
Designed and made by: Cindy Wiens
Quilted by: Darby Myers
Size: 60" x 60"
Posted by Live a Colorful Life at 1/12/2022

what a cool post cindy. your quilt is stunning and so nice to know the background story. you are a talented lady and i admire your creativity so much. thanks for sharing once again. take care deal lady.

Fun story to the naming of your quilt. It is quite lovely and has had it's 15 minutes of fame for sure. Just wondering how you hang the quilt being two sided? Thanks for sharing!

Congrats on the two publications connected to Reserve Champion. It's fun to learn more about it . . . especially how you chose the name. I find that for some quilts the names comes easily and for others nothing seems just right. I have quilts I've never named. Guess I should get back to that along with the labeling I so rarely do.

Such a famous quilt! Publicity for RJR, published more than once, a calendar pin-up, and a tribute to your brother... what more could one quilt deserve? It's really a beauty, Cindy, and a testament to your design and making skills. Good for you! Hope you will be able to choose a "worthy" family member to someday inherit it, and appreciate its value.

I love that you have written the history of this quilt, how it came to be and what the name of it means. It's another one of your beautiful designs, with all the right colors. I love my calendar and enjoy seeing your handiwork!