Back in the day, I posted frequently about quilting progress, projects I was working on and completed quilts. While I have continued to sew, posting about it has become a rarity it seems. In 2022, I want to keep better track of what I'm doing. Following Jeni Baker's lead, I am also tracking my fabric purchases and the amount of fabric I use up/destash. My goal is to sew mainly from what I already have on hand.

So. On to things I worked on in January.

My friends, Stephanie and Pam, and I decided to choose a block of the month we could each work on, and then Zoom once a month and sew together. We chose the Hygge quilt by Annemarie Chaney. I'll be honest and say I'm not a huge Tula Pink fan, but I have always thought her Holiday Homies line was really cute. It comes in flannel and seemed like a win-win. It will be a little bit "holiday" but not too much, so we can use it throughout the cold months, not just Christmas. 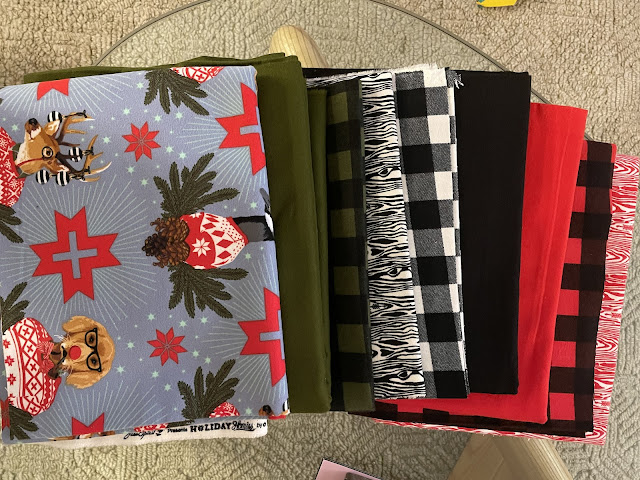 The first block was this series of cute mugs. 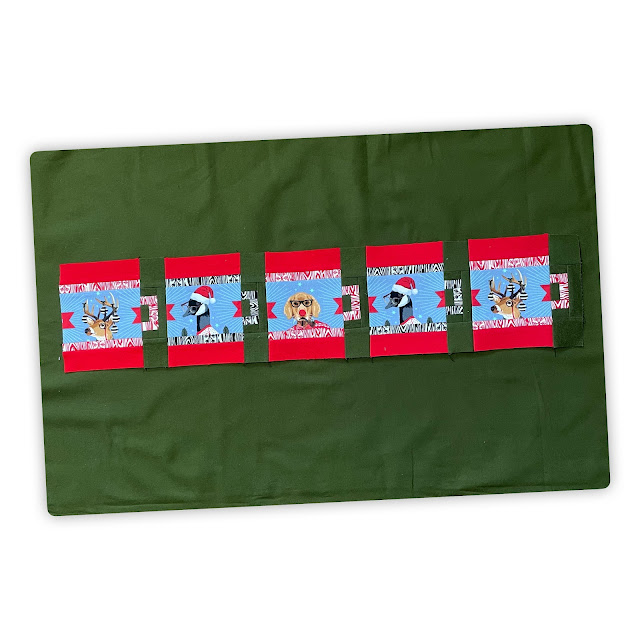 I started the Riley Blake Designs 2022 Block Challenge. Three blocks were released in January, one each Tuesday for three weeks. I'm using a fat quarter bundle that I have had for a long time: Rosa by Crystal Manning for Moda Fabrics. I had just been waiting for the "right" project and this seems to be the one. 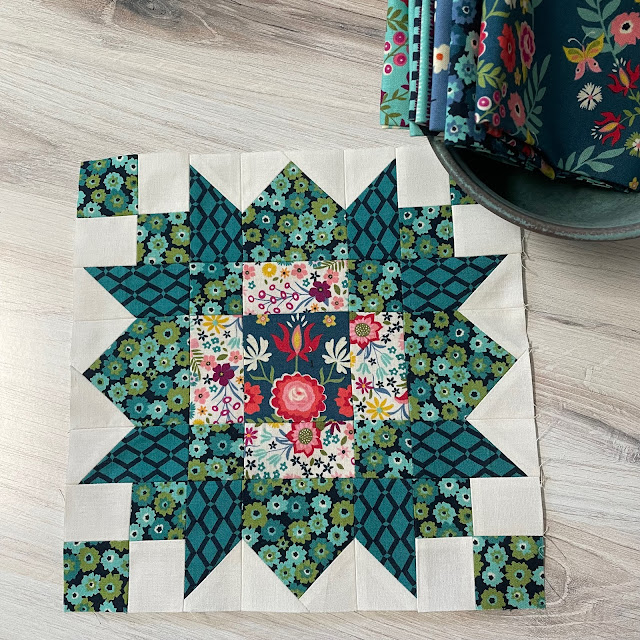 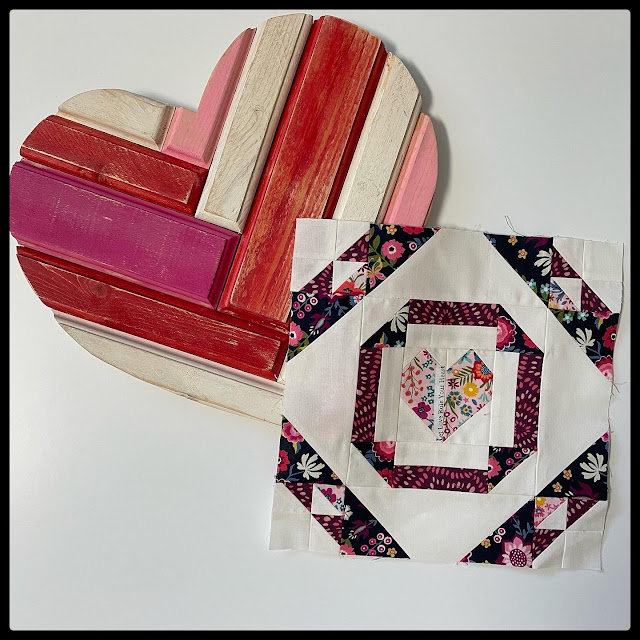 I loved that I could add the sweet selvage in the center of the heart--a fun little touch. 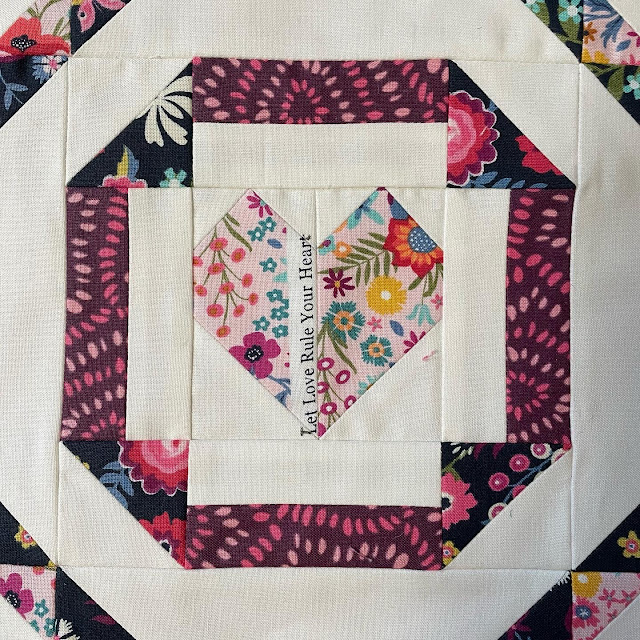 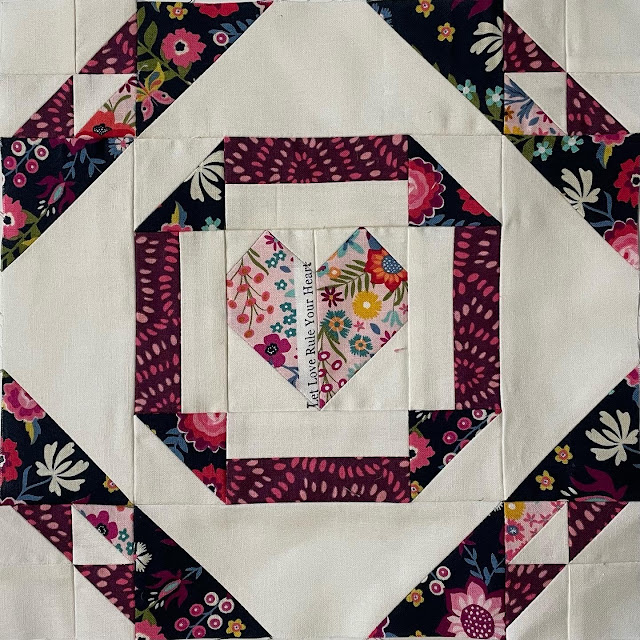 This was a seemingly simple block that I ended up making and remaking. I didn't take a photo of the first time I made it, but I switched these two around. So Jack the Ripper to the rescue. 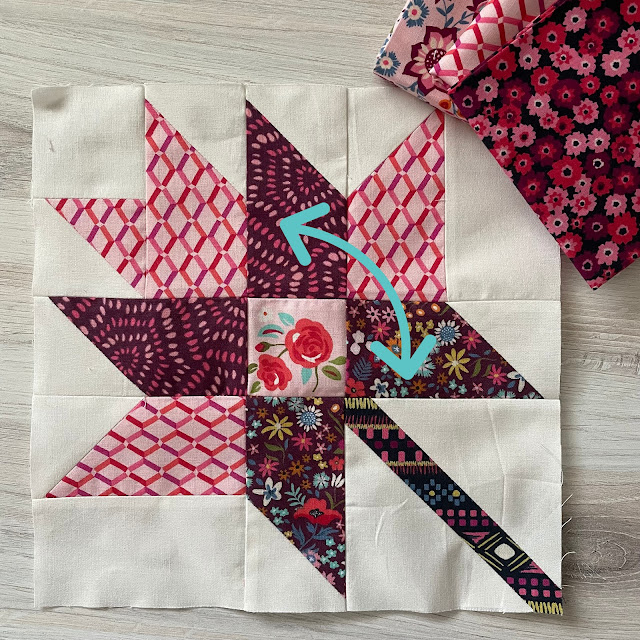 Take two. I was sure I had it right until my friend, Elizabeth (@occasionalpiecequilt) pointed out that she thought the lower leaves were each facing the wrong way. What?? Unsewing. Again. 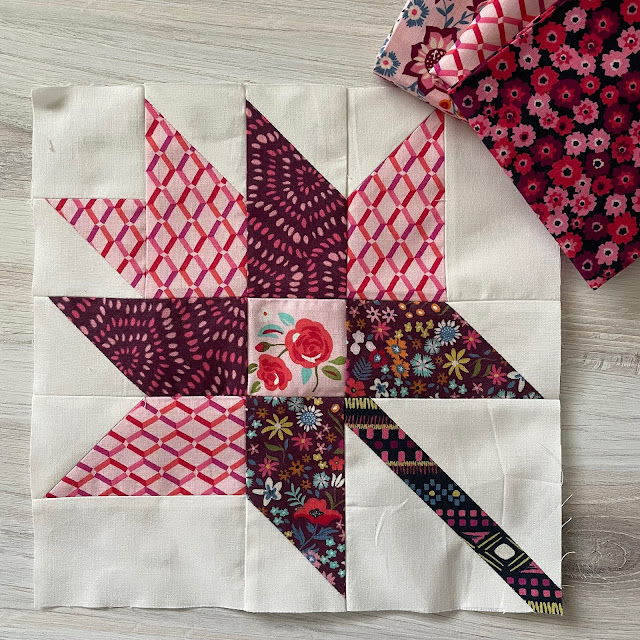 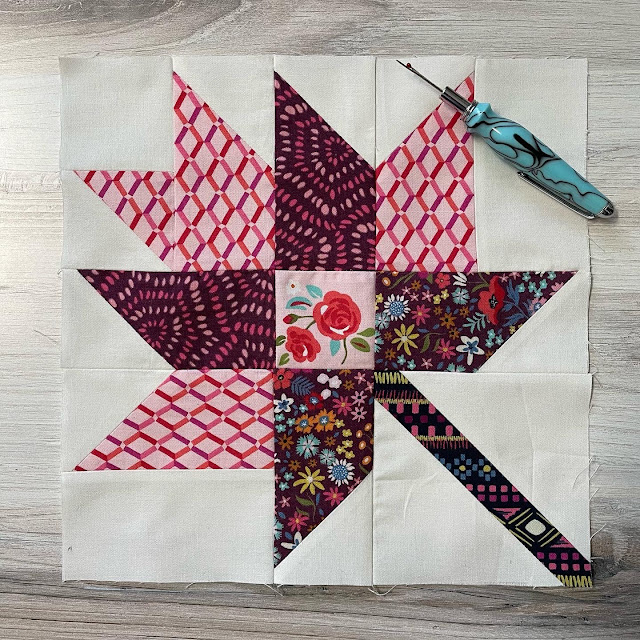 My current EPP project is Double Ruby Ring by Michelle Bartholomew. I nearly gave up on this project after the first block because the "flat back" stitch and I do NOT get along. Elizabeth (@occasionalpiecequilt) to the rescue again.  She told me I could just do my normal whipstich even though I was working with concave and convex units. "Trust me," she said. "Things will match up," she said. And she was right. So I have renewed vigor to work on this project with my gorgeous Oakshott scraps. It will be a good project during the next two weeks of watching Winter Olympics. 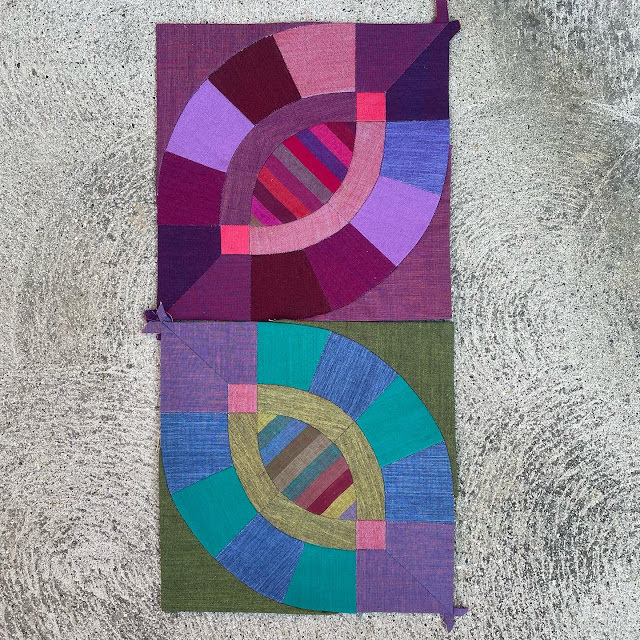 Deco quilt designed by Lo and Behold Stitchery. This was a sewalong from a few months ago. But I am notorious for never even beginning a sewalong until long after it is finished. I finished piecing the last of the blocks last night and it is finally ready to stitch the top. 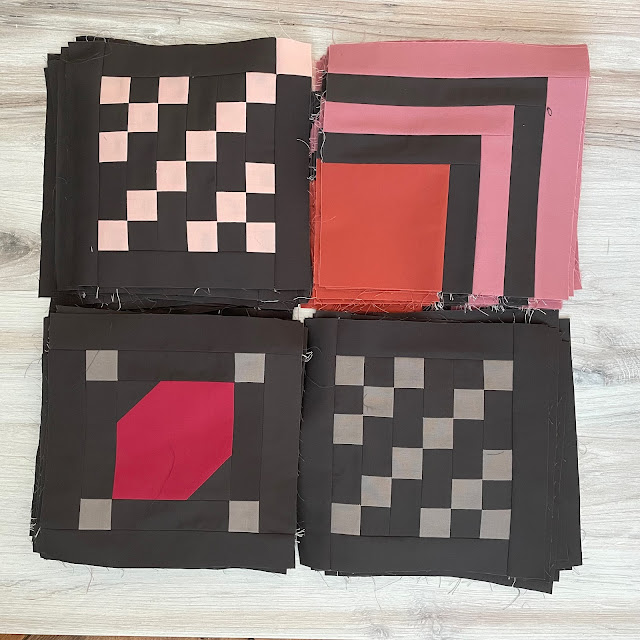 COMPLETED PROJECTS
I finished two pillows in January.
This is for a friend who did me a big favor. It will go in the mail after I finished another small project to include. 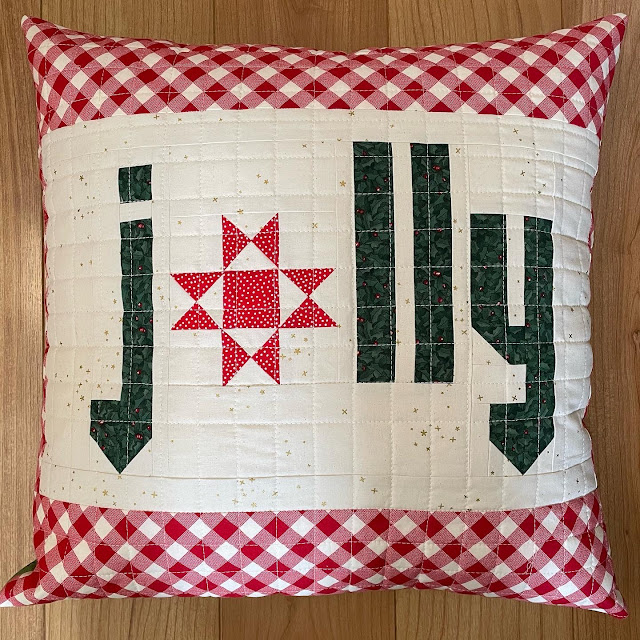 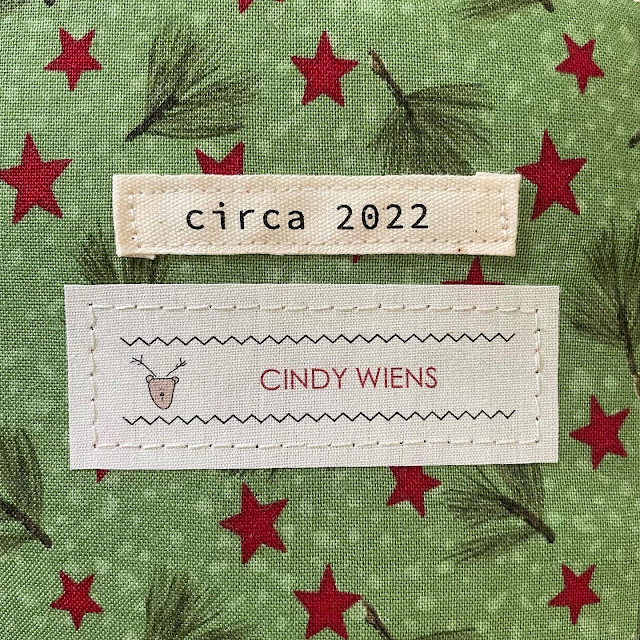 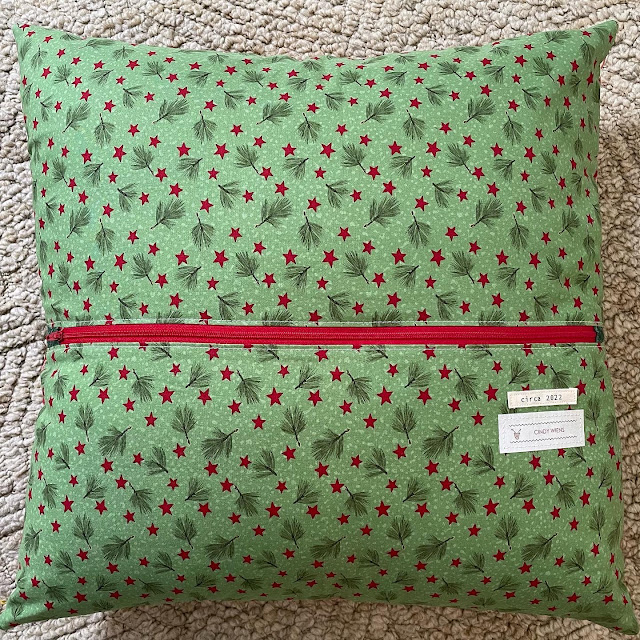 This was for my granddaughter, Charlotte, with a cute little label from Kylie and the Machine. 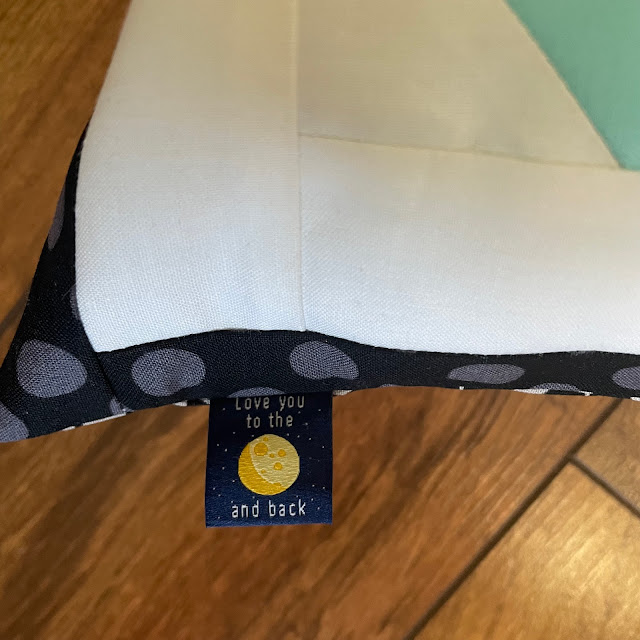 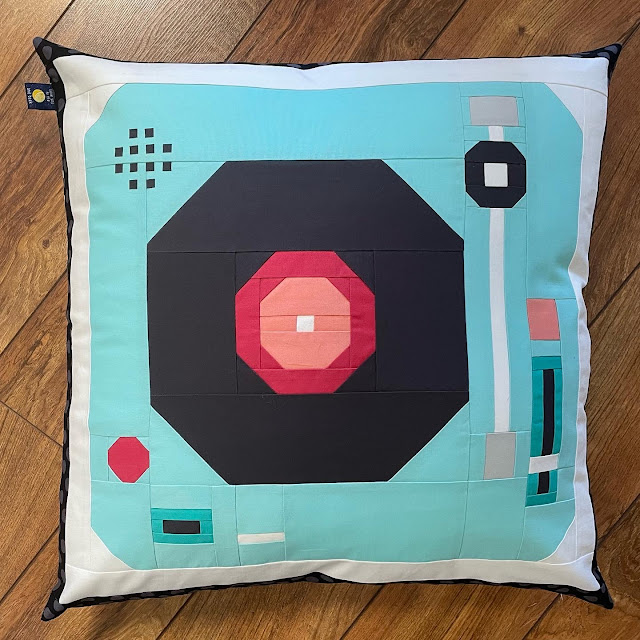 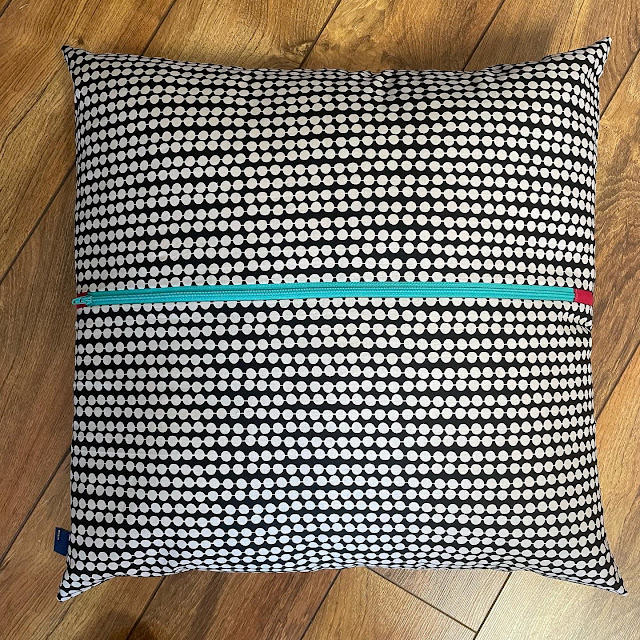 I did a big destash in January, so the numbers look great:
Used up/destashed: 64 yards
Brought in: 9 yards
Net: -55 yards
Year to date: -55 yards
I think that pretty much sums up January.

First you're killing it at Wordle, now you take a big lead with off-loading 64 yards of fabric? Ladies and gentlemen, don't even both to show up if Cindy invites you to shoot a little pool! LOL

I promised myself when I registered for QuiltCon that I wouldn't buy any fabric until I got there. I'm sitting tight, but the last week has been one challenge after another. Have you seen Tara Faughnan's BOM?!

Also, thank you for the relatable comment about starting sew alongs. I'm already a month behind in one that started 3 weeks ago. Which is why I tend not to join. I mean, is it even a WIP if you haven't cut any fabric?

Lovely to see all your sewing projects Cindy! Both cushions are fabulous. And the oakshott EPP blocks are very striking. But I think my favourites are the block challenge blocks! The fabrics are so pretty and this will be a lovely quilt! Elizabeth is a wealth of knowledge and encouragement!

Your projects are all looking great. Did you use the Shawshank seam ripper to make the task more enjoyable?

I so enjoy your posts, Cindy, and this one especially resonated since I, too, am doing the Deco QAL. My blocks are done and have been for awhile, but I got stymied by realizing that cutting blocks in half would result in lots of edges being truncated, so I'm deciding how I'm going to manage that. Someone in the FB group showed their solution (which involved redrafting the side blocks!), and I think I'm going to head that way, too, dangit.
Your Oakshott blocks are INCREDIBLE - love how they look!
And, lastly, how did you destash? Thru online or donation or?? I really need to do a bit of that myself!
Thanks for sharing your life - so encouraging and entertaining!

So many fun things are happening in your studio. Keep sewing. After spending most of January in organizing mode, I plan to start sewing Monday. I'm even thinking about blogging again. Maybe. I don't think I would have noticed the "mistake" in your block but once I see the final one it just looks right.

Lots of gorgeous projects in your blog post! The Riley Blake blocks are really pretty.

Ah yes, we are again similar. I am not a fan of Tula Pink fabrics, at all. I've never even seen the one you're using for your winter quilt. And, I don't like the EPP flat back stitch either! Tried it and went back to the whip stitch, though every third or fourth stitch I now make a loop to create a lock-stitch. Like me, are you using Bottom Line thread for your EPP? No keeping track of fabric here! As needed, I'm buying fabric before prices increase again. (Raw cotton prices are at an all-time high.) And, with going to QuiltCon in just over a week, I am sure some hoped-for (and not found locally) fabrics will come back with me.