Last week, after I had already hit the publish button for "WIP Wednesday," I realized it was only Tuesday, not Wednesday. Oh well...

I have been slightly more productive this week. I finished one more block for the Riley Blake block challenge, the On Point Hourglass by Melissa Mortenson of @polkadotchair. As I make the blocks, I try to alternate between the blue and pink colorways so hopefully there will be a good balance when I'm done. 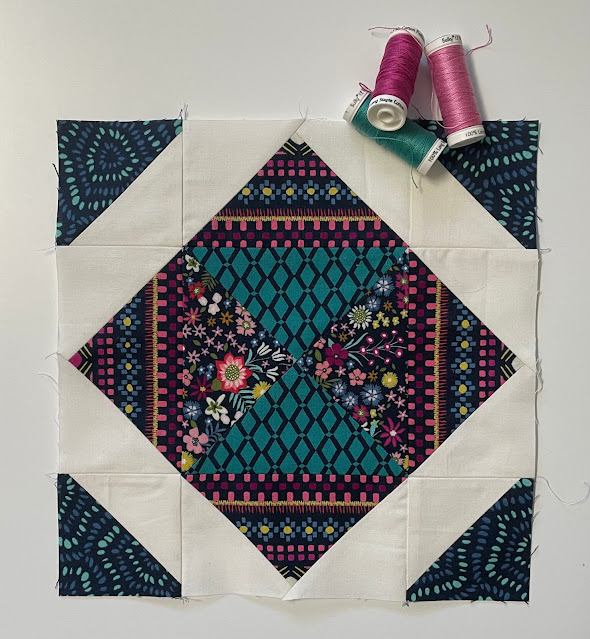 My good friend, Janice (@french75too), let me know there was an open sew day at a local quilt shop. So last Wednesday, I loaded up my Featherweight and a project that I seemingly only work on one block at a time when I need something to work on elsewhere. I finished only one block, but I spent a good amount of time wandering around the store, looking at actual bolts of fabric, something that has rarely happened during two years of the pandemic. 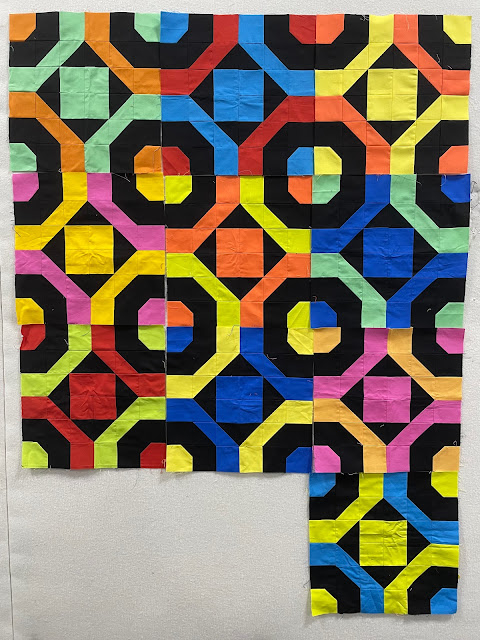 We were told the quilt store plans more of these open sew days when they do not have classes. So maybe I'll actually finish this quilt some time in 2022!
Our pastor and his wife are expecting a baby next month and there was a baby shower for her on Saturday. I decided to make the divided basket designed by Anna of Noodlehead. She writes fantastic patterns. I chose some long-hoarded fabrics from my stash. The three on the right are by Cotton and Steel--those little smiley suns and mice are so cute! 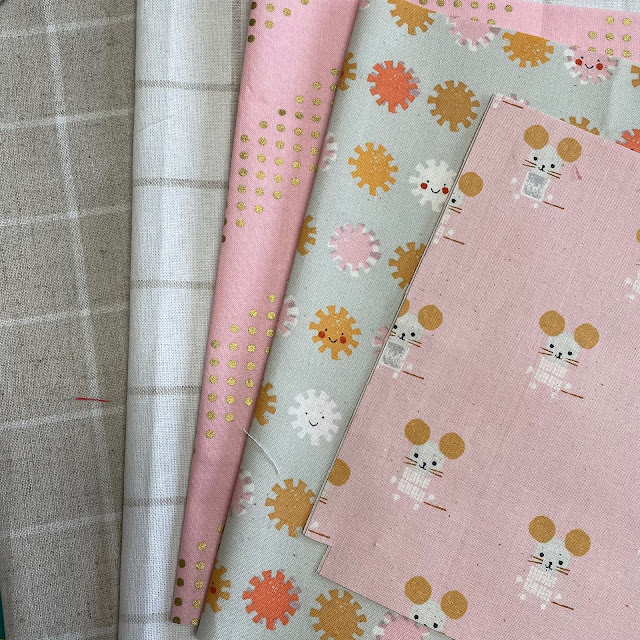 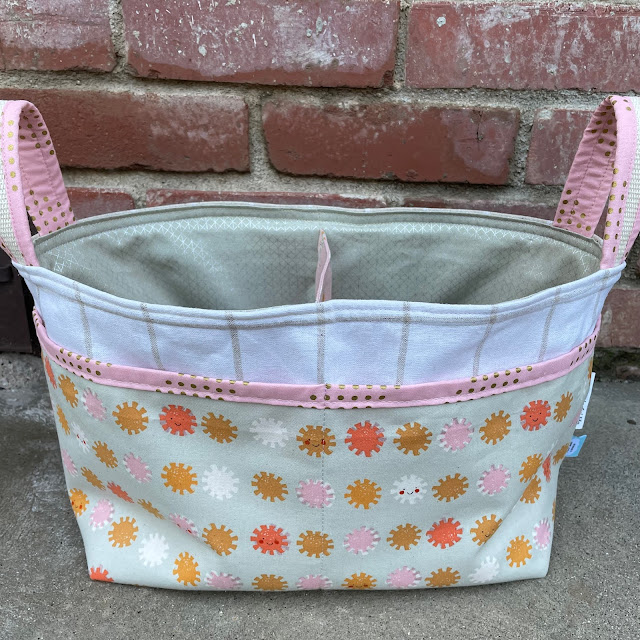 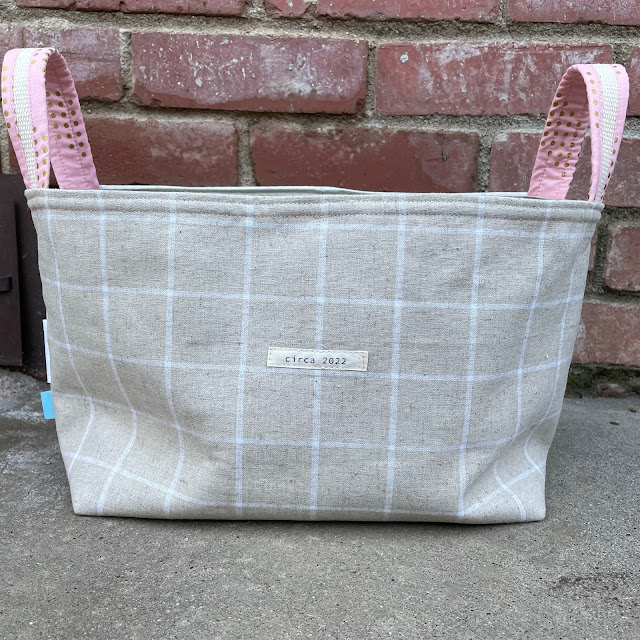 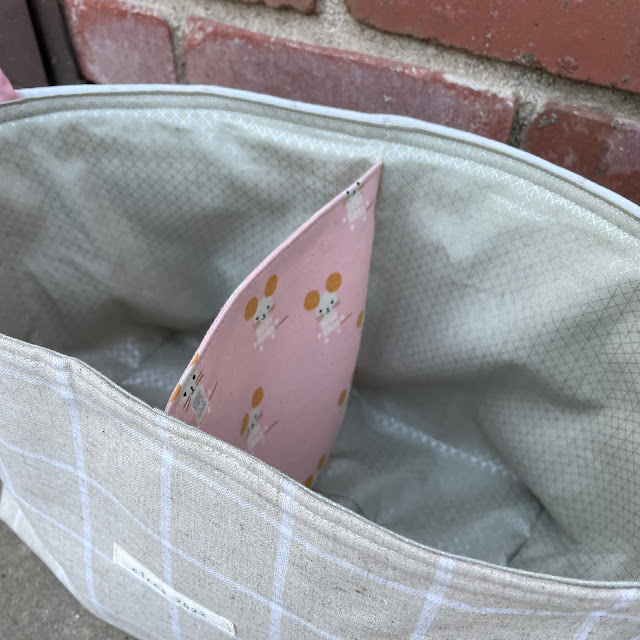 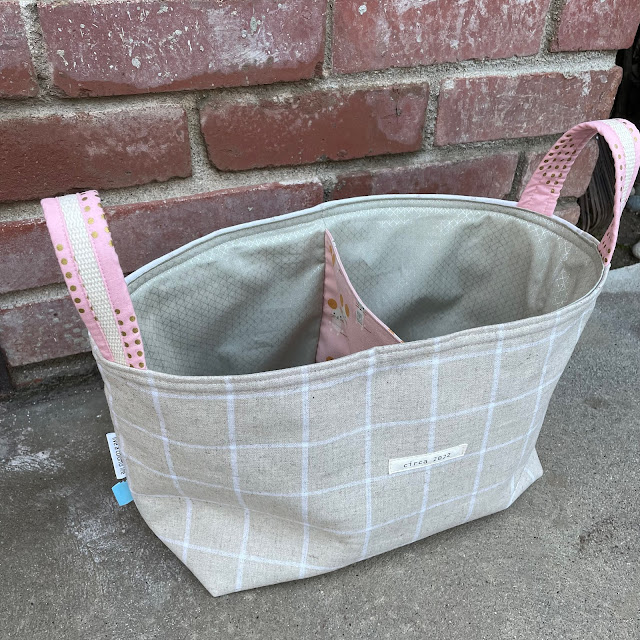 I added the "circa 2022" label on the back and some cute labels on the side--"live a colorful life" (of course) and "you are loved" by Kylie and the Machine. 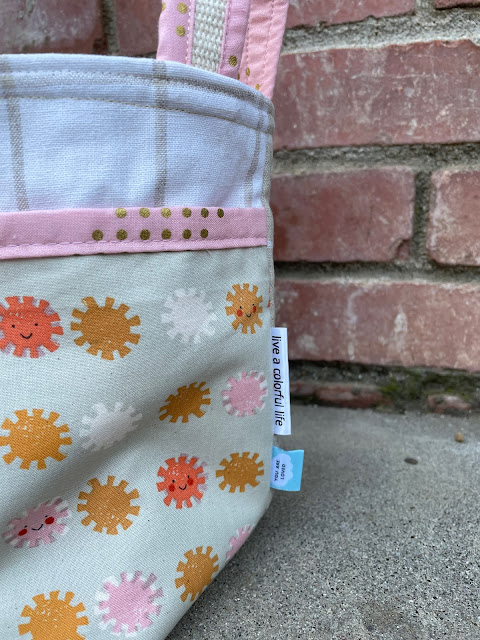 Then I filled it up with some disposable diapers, bibs, a cute stuffed animal and shampoo, lotion, etc. 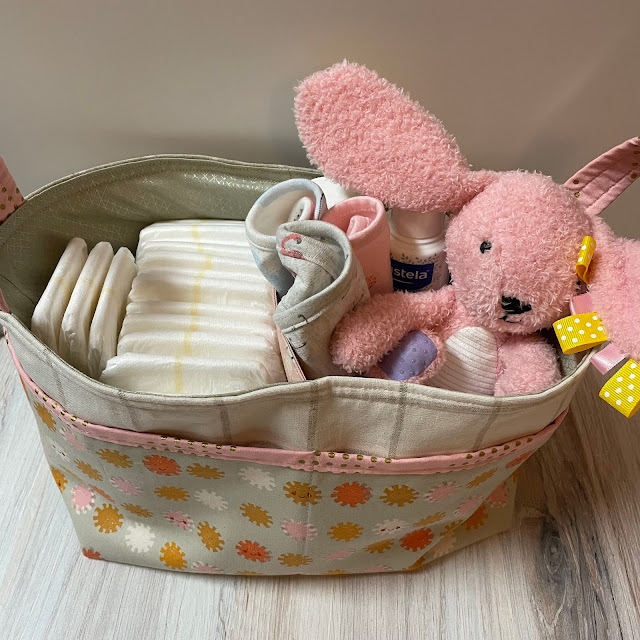 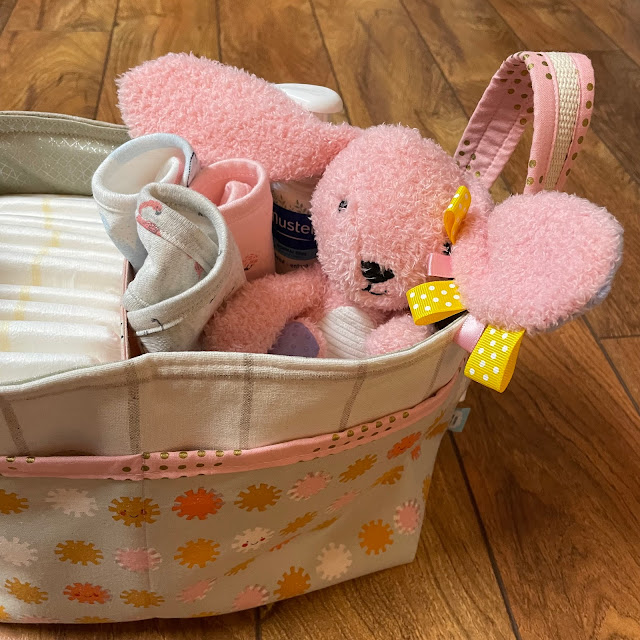 Robin seemed to like it, and that's what counts :) 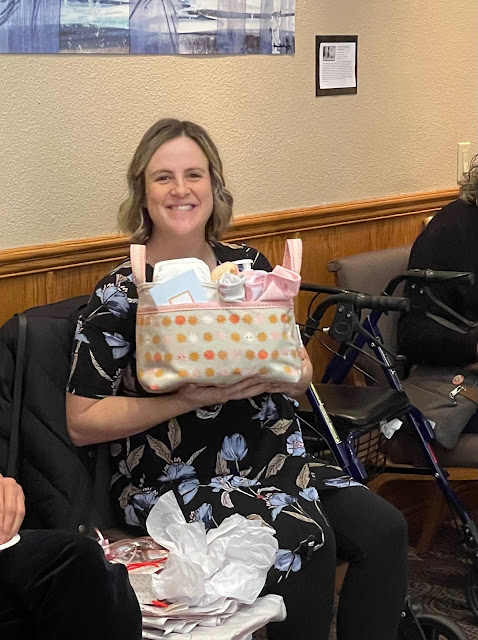 And then for some reason I got on a roll with some smaller quilt tops that have been in a bin for years. I'm sure two of them are over ten years old. The problem has always been that they are small--a little large for a wall hanging but too small for a baby quilt.
The first one was started in 2011 at the quilt retreat in Minnesota. I had these adorable llama prints from Laurie Wisbrun and had just started exploring working with solids. I got this far and it has been folded up ever since. 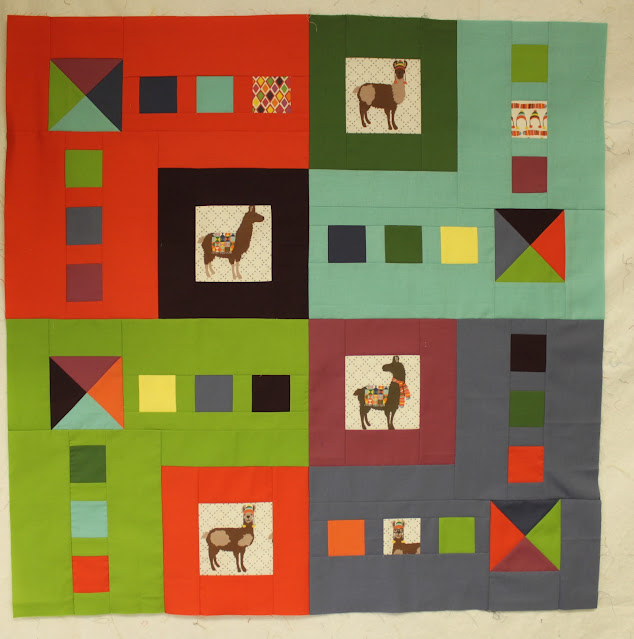 On Monday I got it out, determined to make it into a usable size. First I tried adding stripes all around. Way too overpowering. 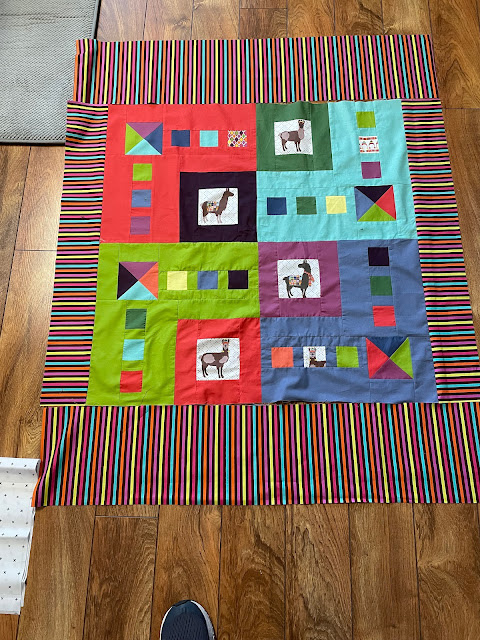 The llamas have a subtle gray-on-white background so I found this white with gray x's and +'s; it was a much better choice for the top and bottom. 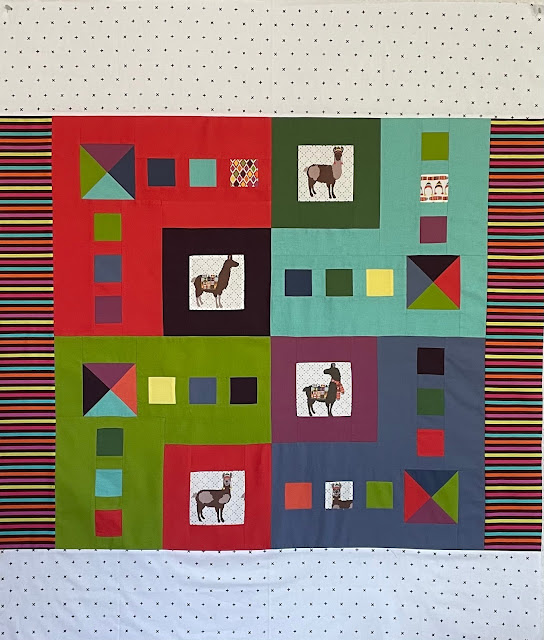 But then...because I had already made a backing based on the initial size, the backing too had to be enlarged. 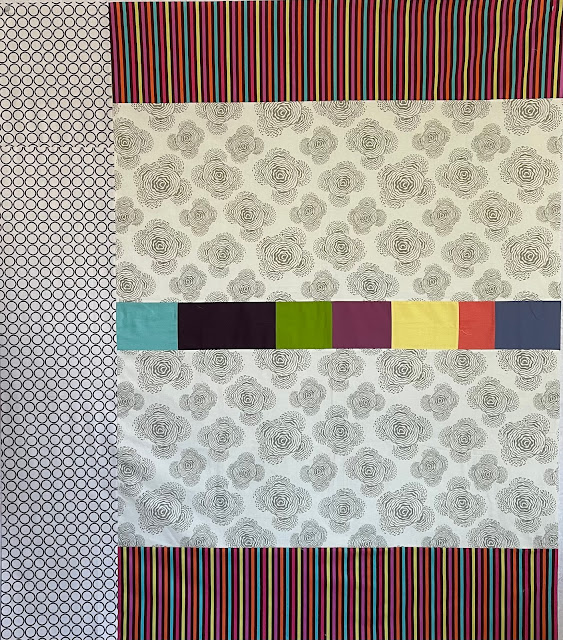 I'm naming it Llama Llove and I think it is now a good size for a baby/toddler.
The next one consisted of nine blocks I put together at around the same time period. I think Quiltville Bonnie's trip around the world block was having its moment and I had a jelly roll of solids. I tried a couple of different settings. 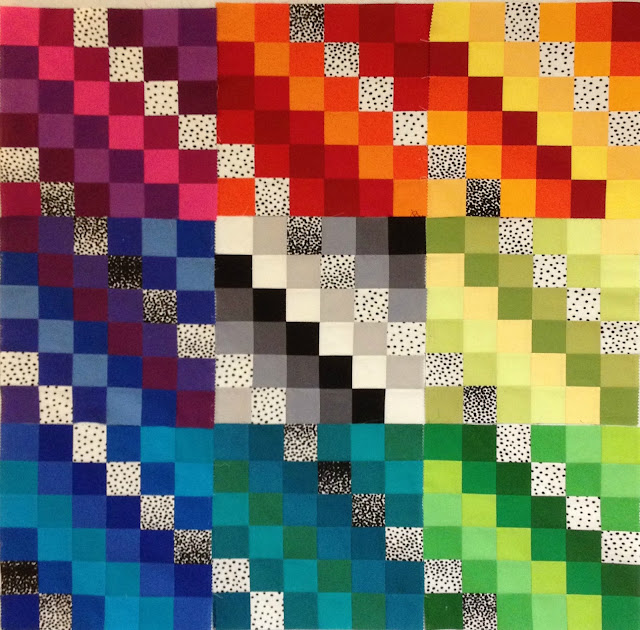 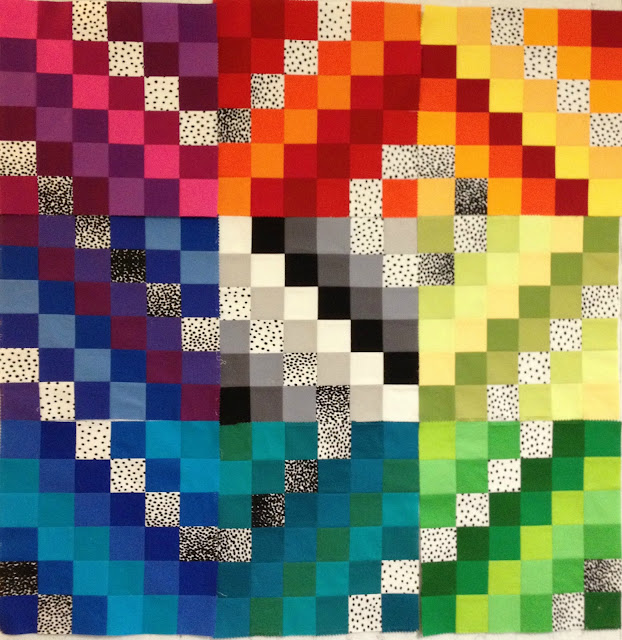 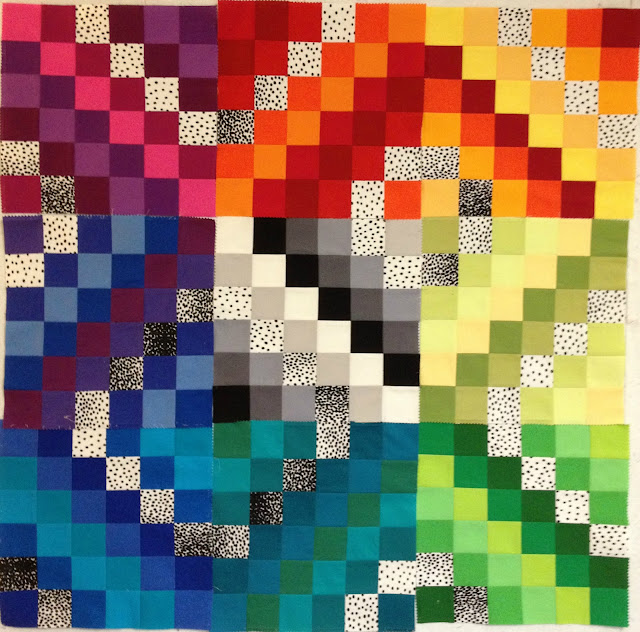 Then about five years ago, on a trip down to QuiltCon in Pasadena, my friend, Janice, and I had lunch on the way and stopped at this cute quilt shop where I purchased four yards of Effervescence by Robert Kaufman. It was an ombre that went from red/orange to purple. I fell in love and bought four yards--probably thinking I could use it for a backing.
Yesterday I started playing around with different ways to use it for a border. I originally thought I would put a band of color next to the corresponding block. 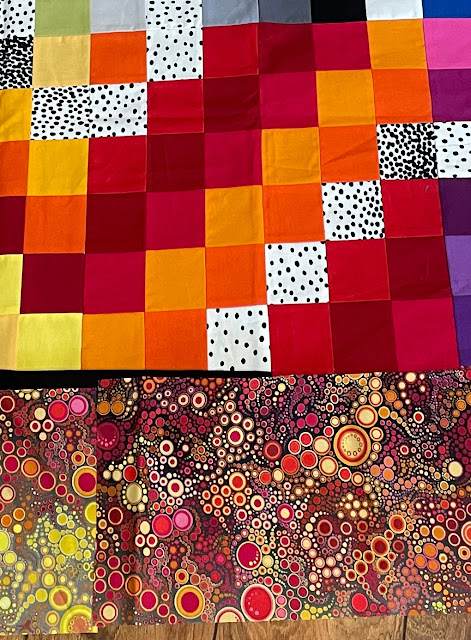 But the colors didn't flow as they made their way around the quilt top, so I began cutting where one color bled into the next and I liked it so much more. 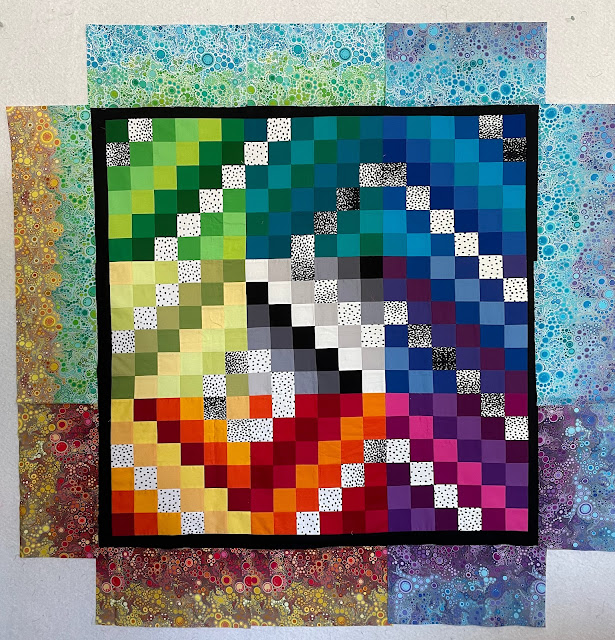 The next problem was making the transition in the corners. I cut multiple squares and experimented with folding them until I figured how to cut them and sew half square triangles to make the transition. 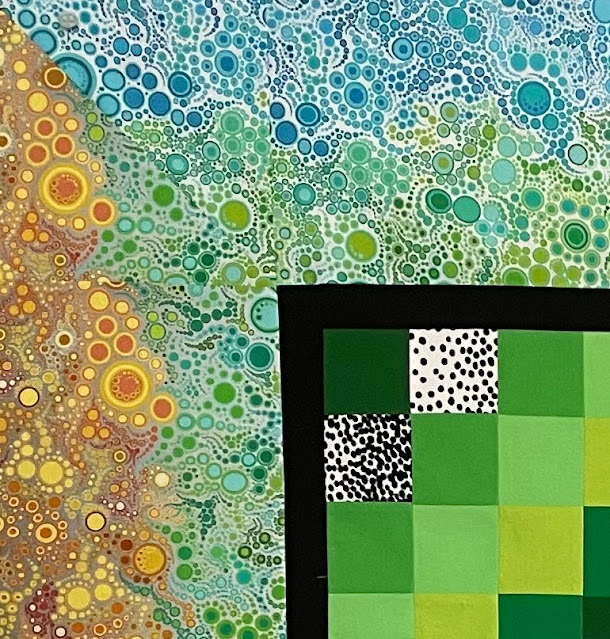 I was fortunate to have purchased four yards because I cut my way through nearly all of it before I got things right!
I'm really happy with how it turned out. I love the way the print bubbles its way around the solid blocks. 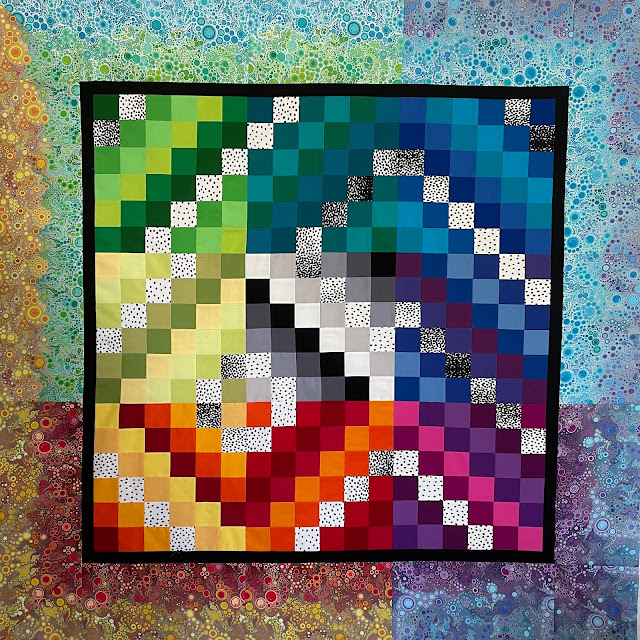 You HAVE been productive! It’s great that you’ve been making headway on older pieces. I love the last one. The divided basket is fantastic too. Bet she loved it.

Love your WIPs. The Llama fabric I remember. I loved her fabrics. Sadly, I don't think she is designing fabric any more. I think sometimes a few years away makes us look at projects differently and we are able to figure out what to do. Yours are all great!

That's an adorable baby gift. Love all the little tags too. Good for you finishing up old projects by finding ways to expand them into useful sizes. I especially like your scrappy trip blocks with the black and white dots mixed in. I have some of that fabric and this is giving me some ideas.

I love that baby basket gift!! You are so good to make something fun for a new baby--it will be well used. And love also your making old quilts into new. I have a few tops that need attention--you are giving me courage to keep going and get them out of the closet.
Finally--so glad you got out of the house and had fun at a sew day. :)