Last Saturday, after two (two!!) years of virtual sales due to the pandemic, the West Coast Mennonite Relief Sale was held in person at Fresno Pacific University. In case you are wondering what this entails, it is a sale that supports the work of Mennonite Central Committee, which works in over 50 countries. MCC helps to meet immediate needs of survival during times of crisis like hurricane or war, and also works to provide better access to food, water, health care and education. Given what is currently happening in the world, it is of note that it began in 1920 with its original goal to provide food for Mennonites who were starving in Ukraine. It is a wonderful charitable organization where the majority of donations go to relief rather than admin.

Anyway...there were some changes this year in how the sale was run. It is usually a two-day event, 4-9 p.m. on Friday, and then 9 a.m. to 4 p.m. on Saturday. There is a huge quilt auction held in the gym, and lots of food booths outside. This year the entire sale was held outside and it only took place on Saturday.

I feel like I hardly took any pictures this year.

Aaron was in charge of handing out the bid numbers. 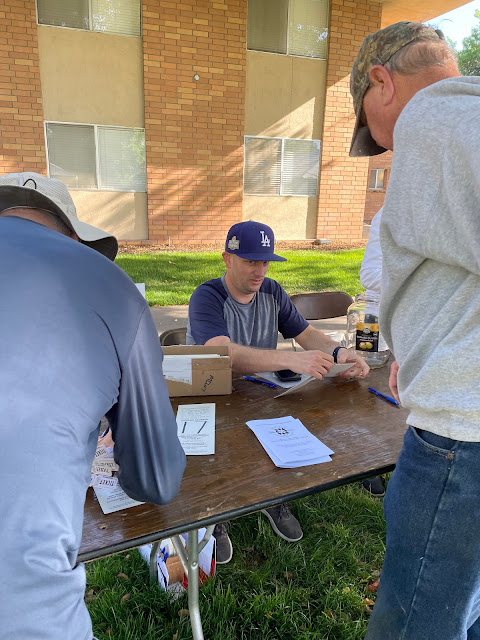 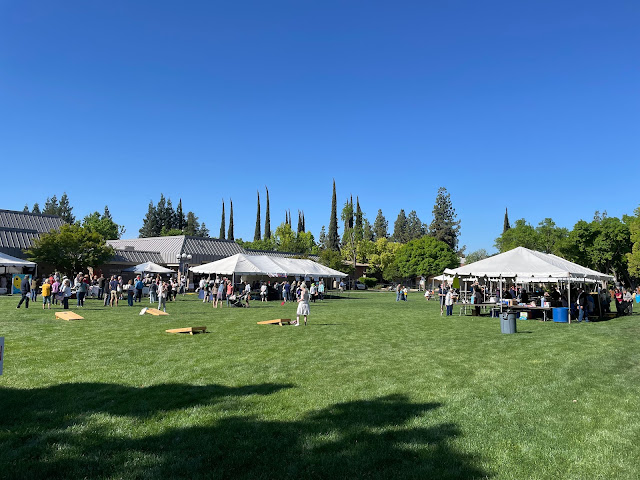 Even the quilt auction was held outside. This year there were about 100 quilts up for auction, while normally there are 200+. But there was so much energy. It was a beautiful day and people were so glad to have the sale happening in person again. 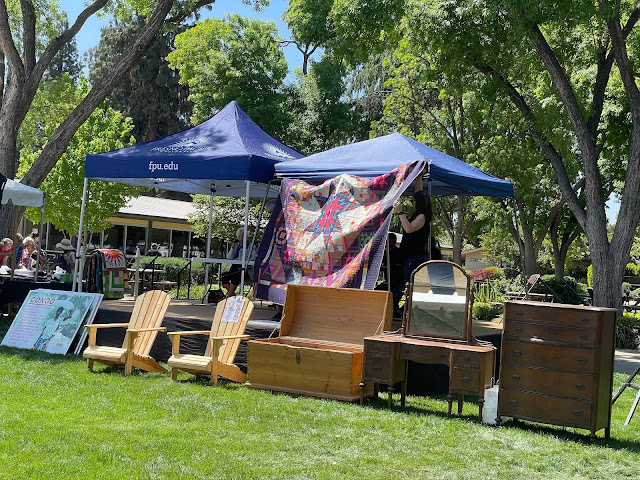 Several years ago I donated a kit that had been sitting around in my sewing room for years. It was called Amish with a Twist 2 (designer Nancy Rink). It is a really large quilt, something like 100"x 100" and when I realized I probably wasn't going to get around to it any time soon, I donated the kit to our church quilting group. My friends, Barbara Janzen and Gisela Bigbee, sewed the top together, and then it was quilted by Jeri Carney (@athreadabove). It was absolutely stunning, and in fact a partial image was used in the marketing postcards that were mailed out about the sale. 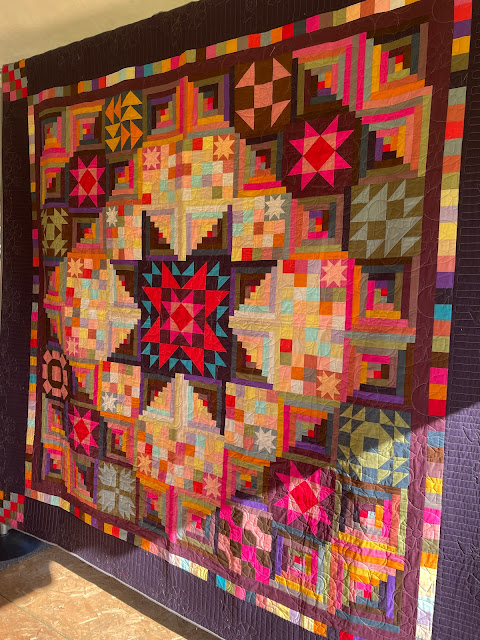 There was so much excitement when it finally came up for auction, and the price kept going higher and higher. It ended up selling for $13,000! I didn't do anything more than donate the fabric and pattern, but it was thrilling to have been even such a small part. So much good will be done with the funds from just this one quilt. I'm not sure how much the quilts went for overall, but I heard that the quilts donated from our church alone raised $40,000!
I kind of forgot that I had donated this small flowering snowball quilt (hand quilted by Lori Wall), and Mark and I had gone home before it came up for auction. It turned out that Christa and Jason were bidding against each other, and when they realized that, decided only one should do the bidding and they would split the cost.  Our pastor and his wife just had a new baby and I think this quilt went to them, which makes me very happy. 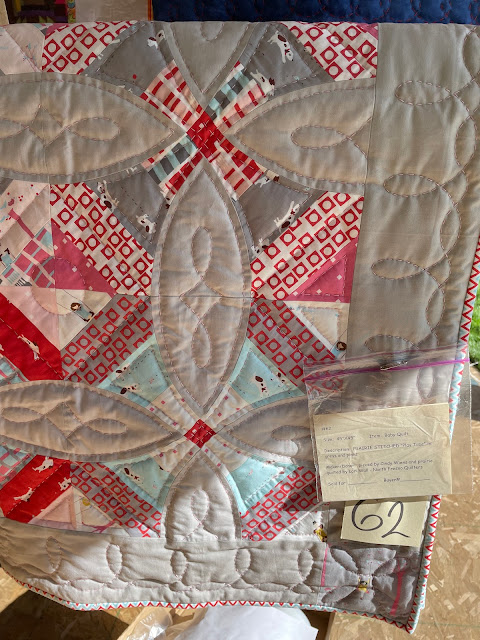 And fritters were back this year! Hot and fresh and so very yummy! 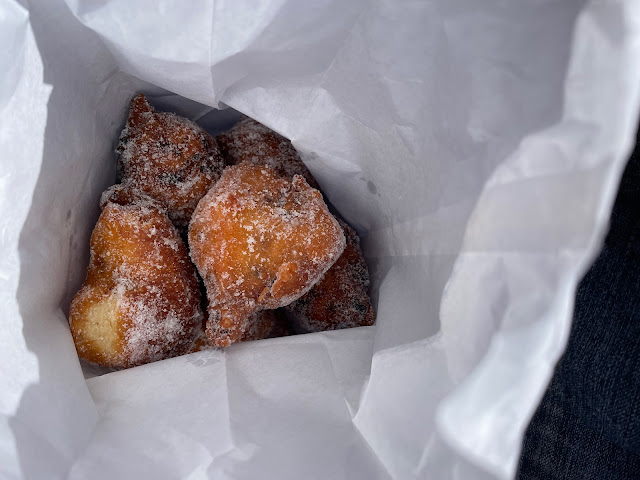 I took this right before we left (and didn't realize my camera was in portrait mode, so only Gabe is in focus). 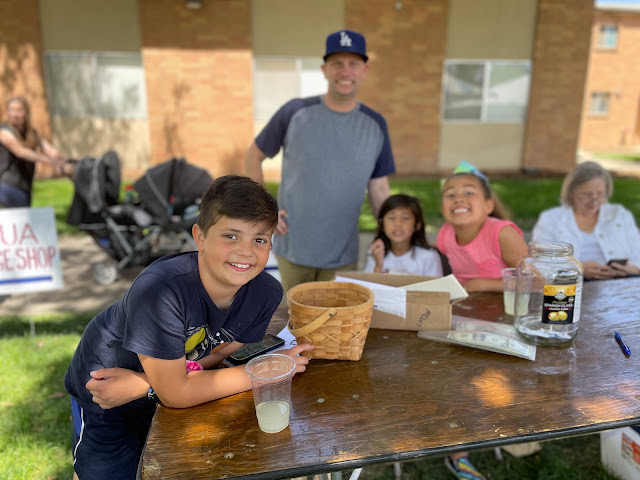 This year seemed extra special. We were finally able to connect with people we hadn't seen for a long time, eat good food and know that the money raised was going to such a worthy cause.
On Sunday the kids from church did a short drama about Jesus' last days before His crucifixion. Gabe had the part of Jesus. 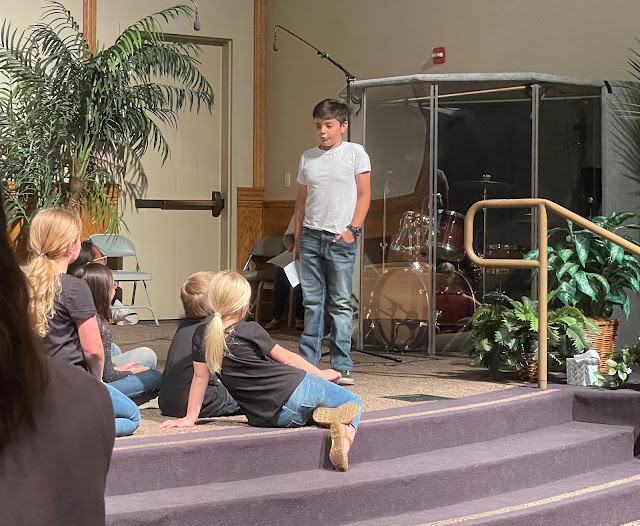 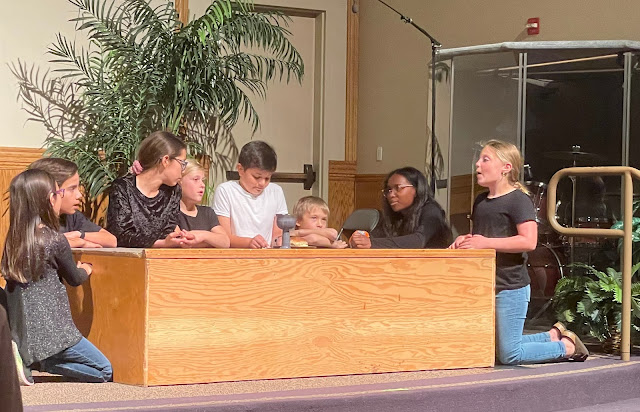 The whole cast (being kids...) 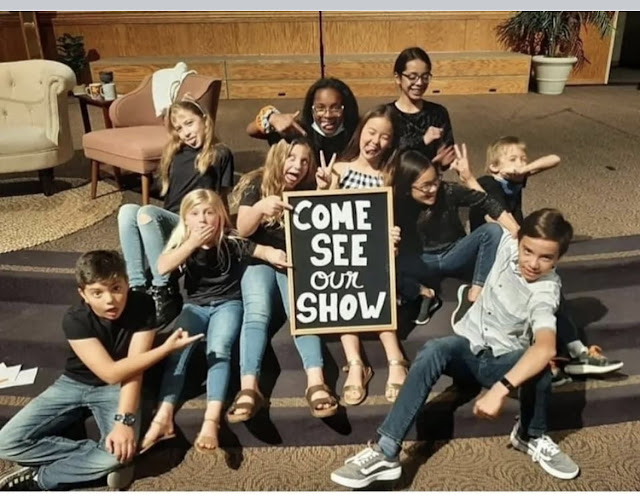 On Tuesday, when the kids were over for awhile, we went to a local coffee shop and played a couple rounds of Uno. Fun times. 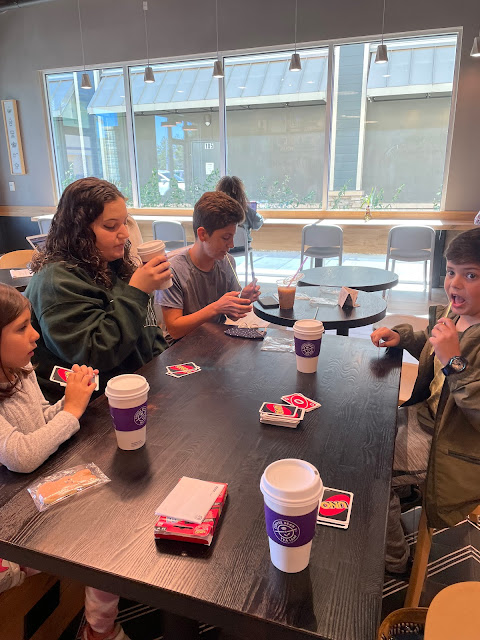