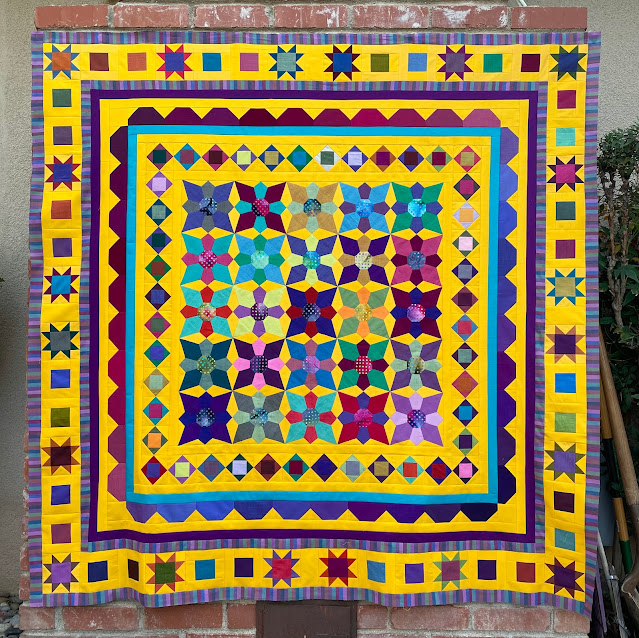 After many starts and stops, this quilt top is finally completed! I'm super happy with it, and never would have thought I would be making such a bright yellow quilt. I'm waffling between two names: Mischief Managed--thanks for that suggestion, Paula (since the center blocks are from a pattern called Mischief), and Sunny Disposition, an idea from my friend, Bruce.

I'm caught up on my Moda Blockheads blocks. 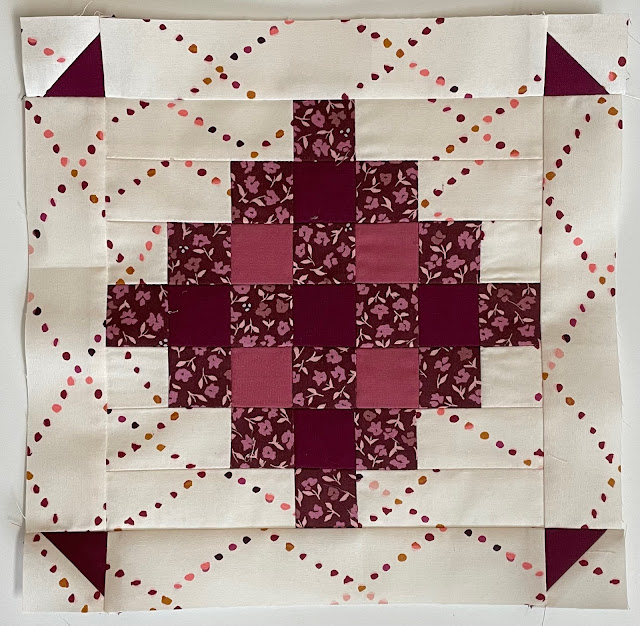 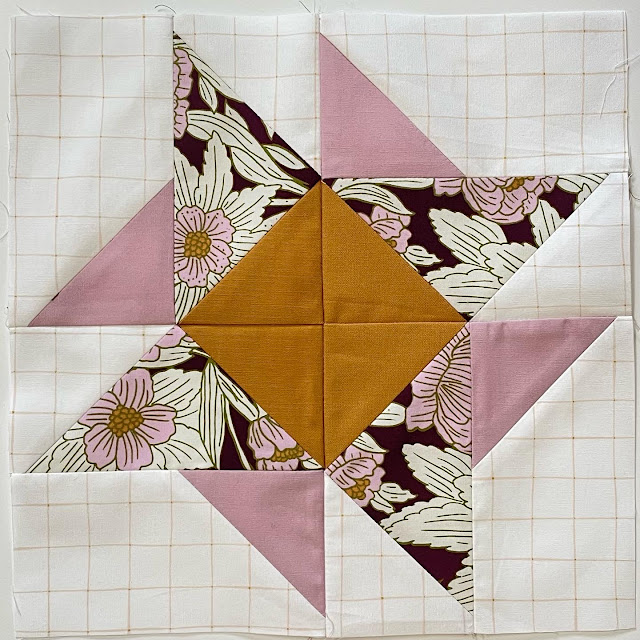 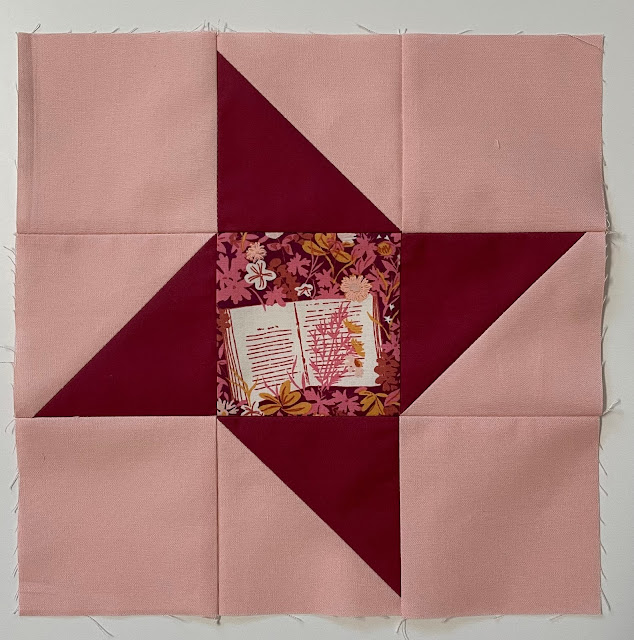 This is often true. But I'm trying to get better about actually finishing. 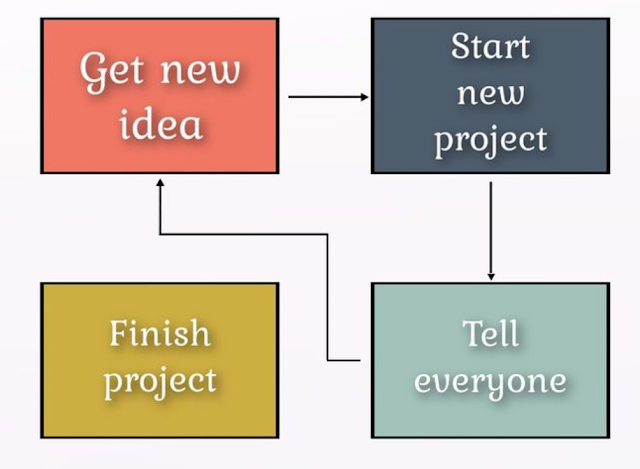 Last week the setting suggestion for the Riley Blake Challenge quilt was released. It was a combination of plain blocks and Irish chain blocks. I liked the setting, although I didn't give much thought to how large the quilt would be--70" x 90". It's been a long time since I have finished a quilt that large.
The Irish chain blocks were surprisingly satisfying to complete. I worked in batches while listening to a good Audible book. For two reasons, I used a very pale pink combined with Kona snow. 1) I'm trying to sew only from my stash and I had a lot of pale pink (for reasons unknown to me) and 2) I didn't want the chain blocks overpowering the very pretty pieced blocks. I just wanted them to kind of whisper in the background. 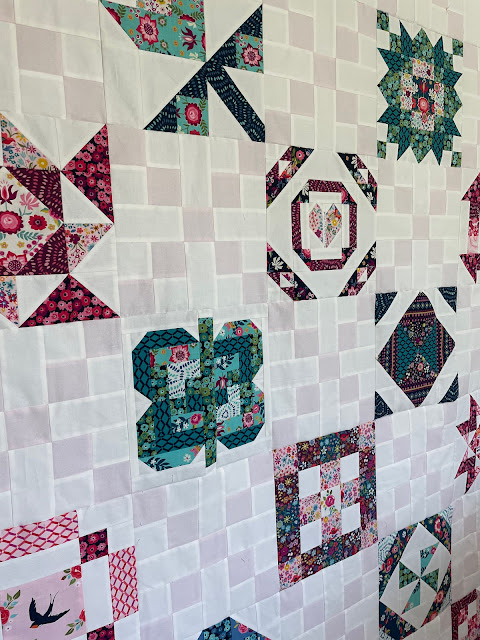 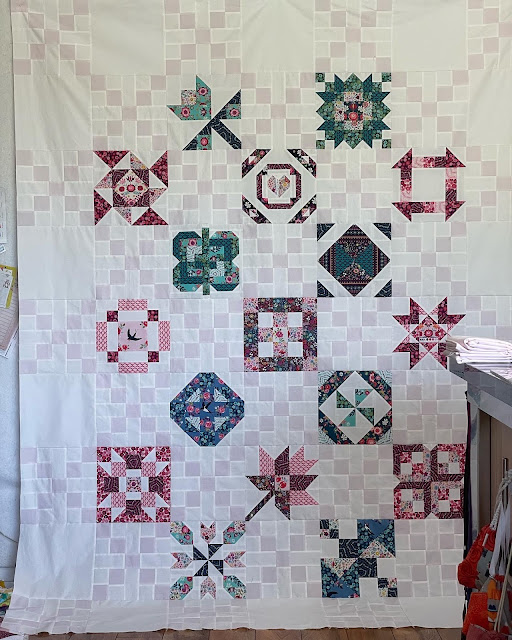 I'm actually quite pleased with how it turned out. Mark's first comment was that it didn't look at all like my usual style, and I think I would agree with that. But I thoroughly enjoyed working with the Rosa collection by Crystal Manning and hope to find a good home for the finished quilt.
Until next week...
Posted by Live a Colorful Life at 6/08/2022

Two very different quilt tops! The yellow is really iridescent all around! And the pink is so gentle. ❤️💛💕

Both are good name suggestions for the quilts, and I immediately thought of combining them: Sunny Mischief. You've had a really productive week and it's fun to see two such different projects. :)

I love your Irish chain blocks in pink and white. The slight difference adds extra sparkle to your background. I like Yvonne's suggestion for the quilt name - Sunny Mischief. What fun!

After all your stops and starts, The medallion quilt finished up beautifully. Both are good names although it certainly feels like a very sunny quilt to me. The whisper effect works really well for your Blockheads. The meme is so so me. I'm having a lot of trouble finishing lately . . . not that that is really anything new. For that matter I'm also struggling to start. At this point in my life I want no deadlines and obligations. Just the freedom to work on whatever I feel like.

What beautiful finishes. I love them both. The yellow quilt is quite pretty and oh so colorful. But those Irish Chain blocks are scrumptious. And outside my wheelhouse. You should also let us in on what you were listening to on Audible!

Look at you go! You're cranking out tops and blocks like crazy! I admire you for what you're accomplishing. For whatever reason, I've been in a machine-sewing lull for the past couple months. Handwork it is, and that means slow, as you know. Book-listening is a must though, and that's a good thing to keep me going.

Congratulations on the finished quilt--you worked hard for that and I love the borders. It really makes that quilt shine.
I loved hearing the rationale about the pink whispering in the background--it's good to share our process to help others be able to articulate about their processes. That is one lovely irish-chain-sampler quilt!

Props for working on (and finishing!) a quilt that's out of your usual zone. I find it's fun to try things I see that inspire me, but those are not usually the ones I want to keep. Maybe that's a good thing. And I've had the advantage of coming form the future (ok, ok, I'm really late reading this) and I think the name you finally settled on for your medallion quilt is great.