In 2014, I chose blocks for my second quilt in the bee I had started, Mid Century Modern. I think Rene' had chosen the spiderweb blocks in a prior month and I really liked the look of them. We used a template from Heather of Heather a la Mode. It was kind of a weird size, maybe because she wanted to make sure the template would fit on a sheet of 8 1/2" x 11" paper. Anyway, the blocks sat in a drawer for years. Until this year when I have been determined to finish all those projects started long ago. 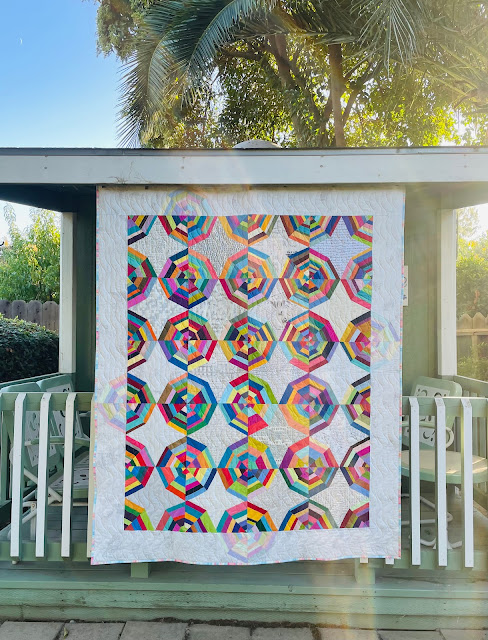 The first problem I ran into was that I needed to make more blocks. And the template was no longer available. I tried to draft my own on graph paper and it probably would have been sufficient. But Elizabeth of opquilt.com came to the rescue and drafted a professional one for me.
That solved the problem of completing the blocks for the main body of the quilt, but I had always had the idea in my head of extending a few blocks out into a border. At first I tried using the same bright colors, but then I had the idea of using a very light print for the border and making the completion blocks in the border out of pastels, to give the impression that something white had been placed over the brighter blocks, giving them the illusion of being lighter.  I completed one block on each side of the quilt and I'm so happy with the subtle results. 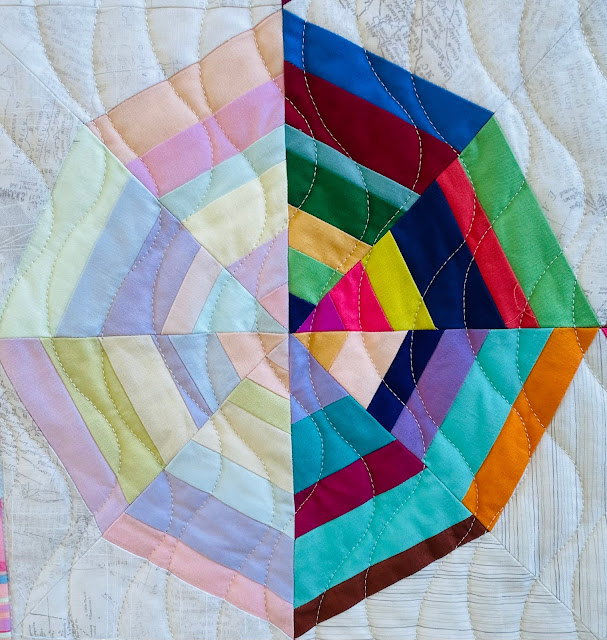 I had signature blocks for the backing, and then had the idea of making a dark, medium and light block just to see what they looked like. I'm also really happy with the results. I think I was just having a good time making the spiderweb blocks. :) 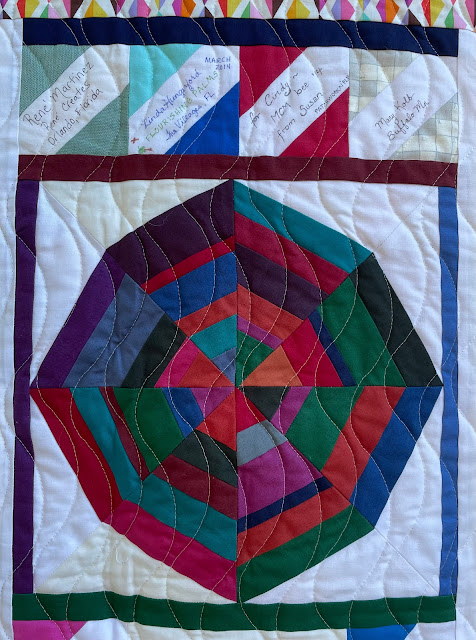 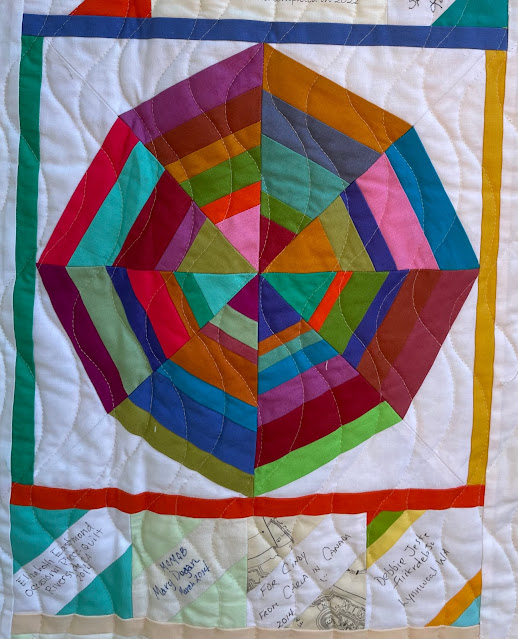 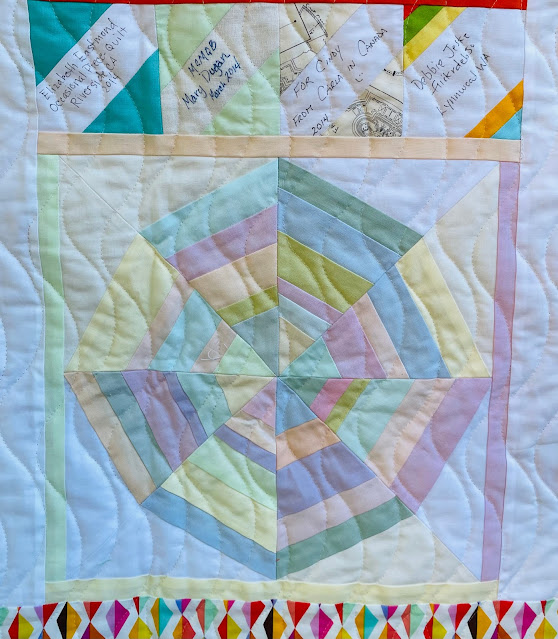 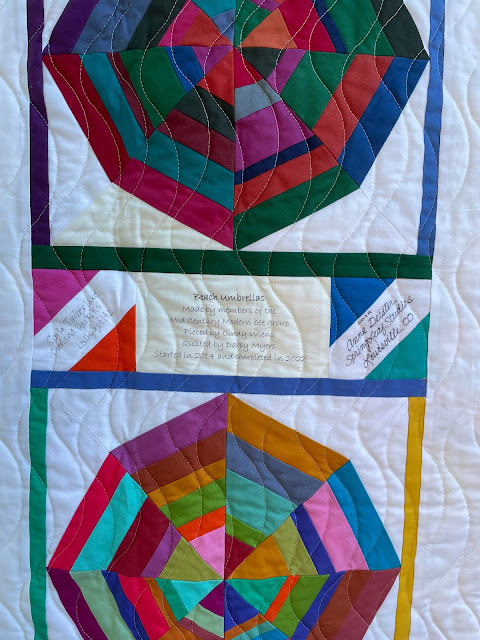 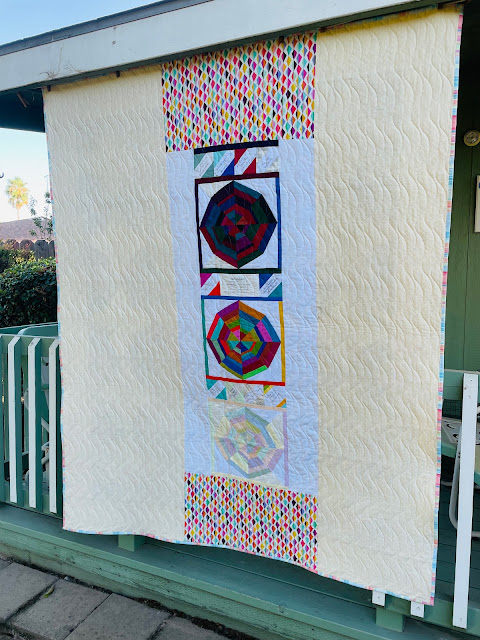 At first I was sure I would use that print that is above and below the pieced blocks as the binding. After all, it had all the fun colors that were in the blocks.  But it was way too bright against the faded blocks in the border. 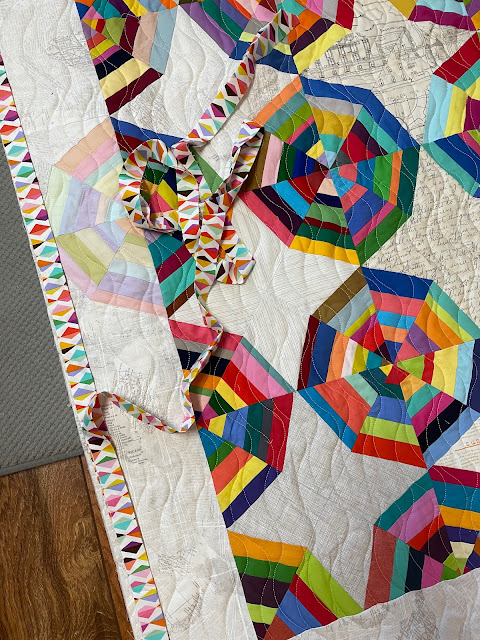 I opted for this more subtle stripe and that turned out to be a better choice. 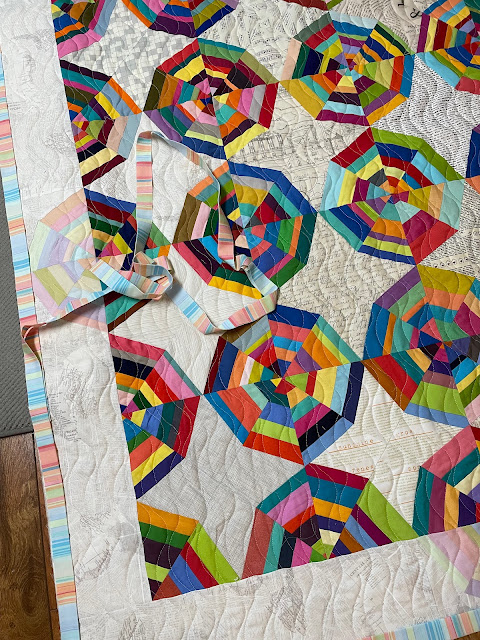 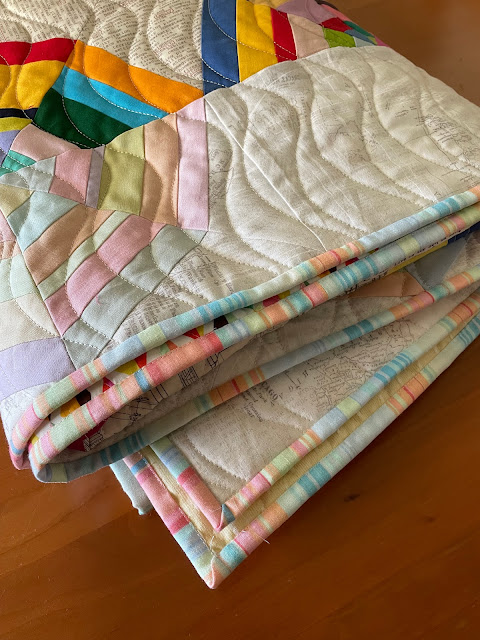 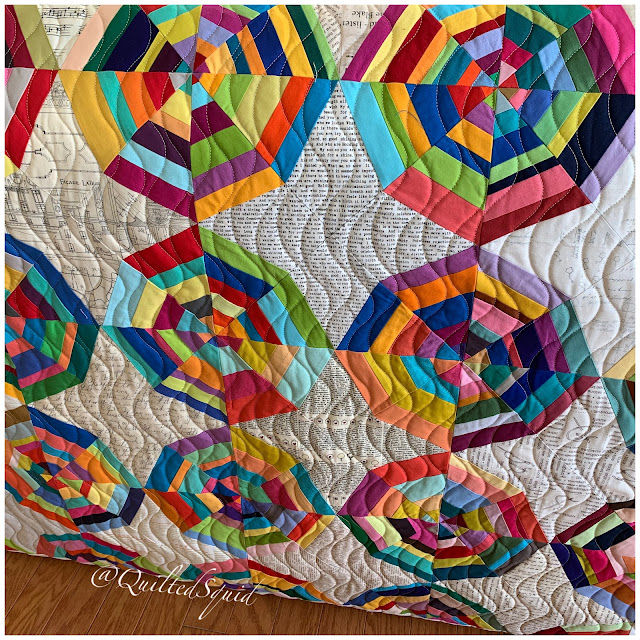 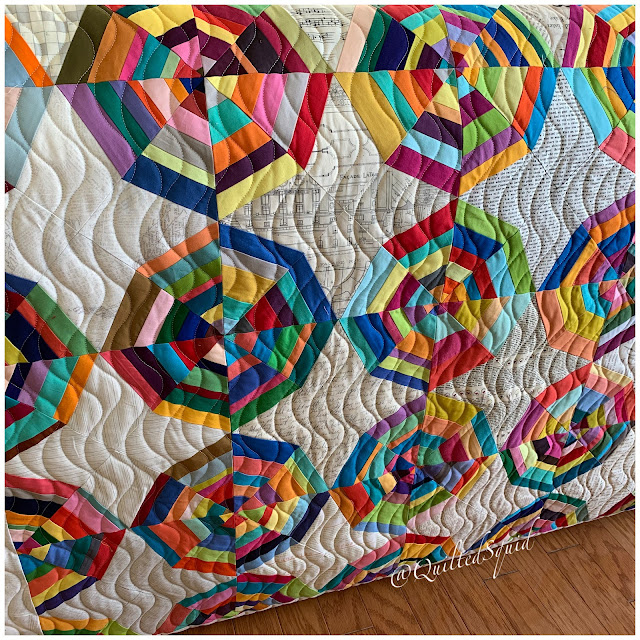 The other day I took the quilt to our son's house for a few photos. Of course I chose the wrong time of day. Lots of bright sun and shadows. But this was the only beach umbrella I could locate on short notice. Ha. 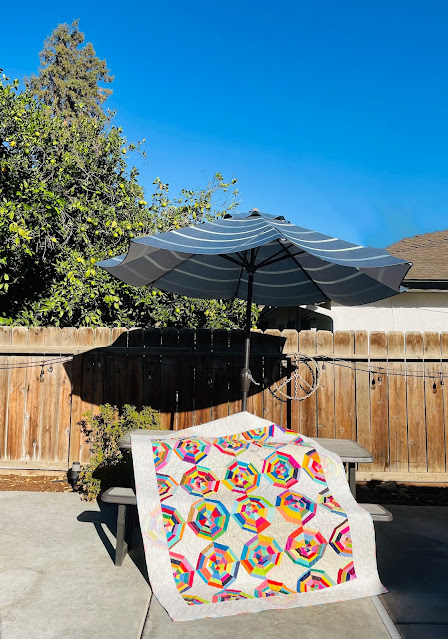 The colors of the climbing structure in the background are fun. 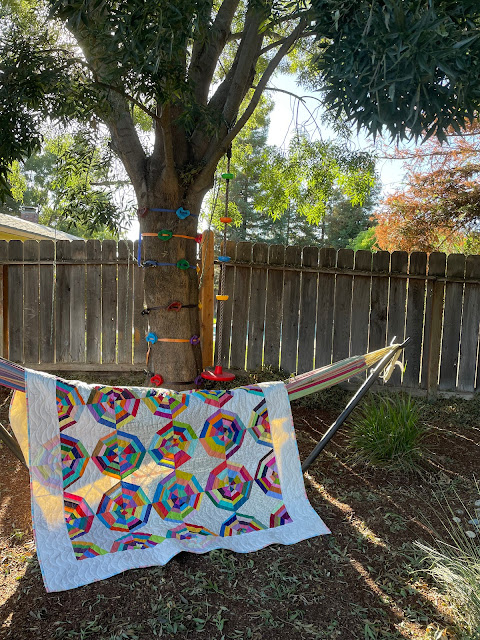 Would you like to make your own spiderweb quilt? Elizabeth has generously offered the pattern for free until the end of the month. The pattern has full-sized templates for three different blocks, multiple illustrations, ideas for completion, as well as tips and tricks for sewing. It is a great way to use up your long skinny strips, and is a fun pattern, in prints or solids! You can find the pattern here. 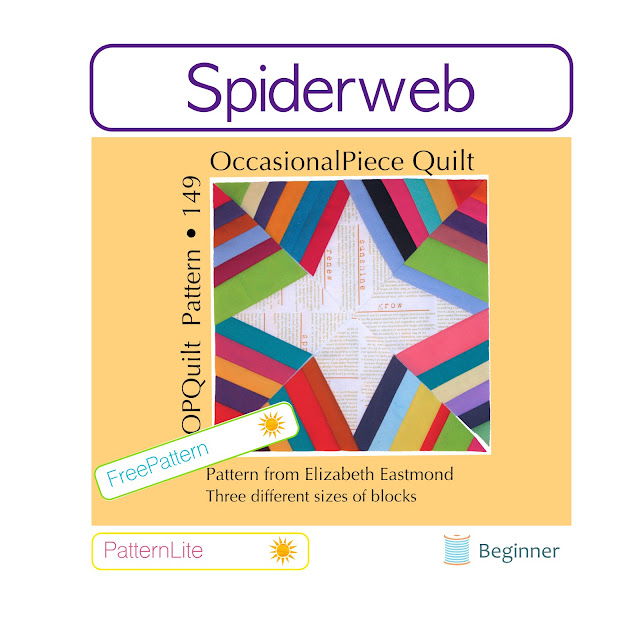 I really love your choice to go with pastels for the spiderweb blocks that are completed in the border. It really makes it feel like the center of the quilt is coming into focus and shining brilliantly.

I especially like the pale blocks that run out into the border. This is a great quilt, Cindy. So glad you finished it.

Such a beautiful quilt, Cindy. The spiderwebs are nicely done and I like the pale 1/2 webs in the border. Did you use scraps or did you select fabric specifically for this quilt. I can see this in next year's calendar. And I really like the mix of signature blocks on the back of the quilt. The binding fabric was an excellent choice.

What a clever way of turning this into a very special quilt! The paler blocks are genius! So proud to have played a small role in this quilt!

Love Love Love how you finished this one. Brilliant. Glad to have played a tiny part. I've had a spiderweb design in mind for a long time and even cut a few strips for it. Perhaps it should be moved up on my list.

I really did think you had put a very thin fabric over the bright blocks to create the ghost around the outside. No, clever you did it right!!