Most of the events of the last week involved Gabe's birthday. He turned 11.

He is the only one of the four grandkids who has always shared a bedroom. During the summer, the kids had the big bedroom swap. He went into Charlotte's room (which incidentally she and I had just painted on New Year's Day), Charlotte went into Gabe's former room, which he had shared with Ella (because it was the larger of the two rooms and she is a teenager now), Ella went into Levi's room and Levi went into the fifth bedroom. Whew.

For his birthday present, Mark and I painted his room as a surprise. My only stipulation was that things be off the walls and the furniture moved away from the wall to give me room to paint. Mark helped tape the baseboards, I did all the painting (he had other obligations in the morning) and then he came back and cleaned up the brushes, roller, etc., which is a huge help! Gabe thought the room was getting painted on Saturday, so he was surprised when he came home from school to find it already done. I'm not sure this is an accurate representation of the color, but it's a really great sage-y green that he picked out. 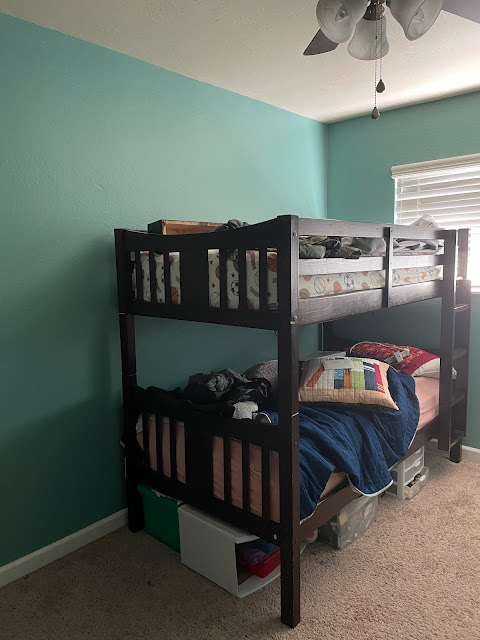 I also made him a pillow. I have a 24" "squishy" pillow on our couch that he loves! I told him I would make a pillow for him and asked what he wanted on it. He said "books." I used a pattern by Amy Friend of @duringquiettime and had fun customizing the books for him using selvages, including a hoarded Harry Potter label. My other favorite is the green one that says "games to play on a rainy day."  I also got out my fabric stamps and made a book called "all about Gabe." That would be interesting reading... 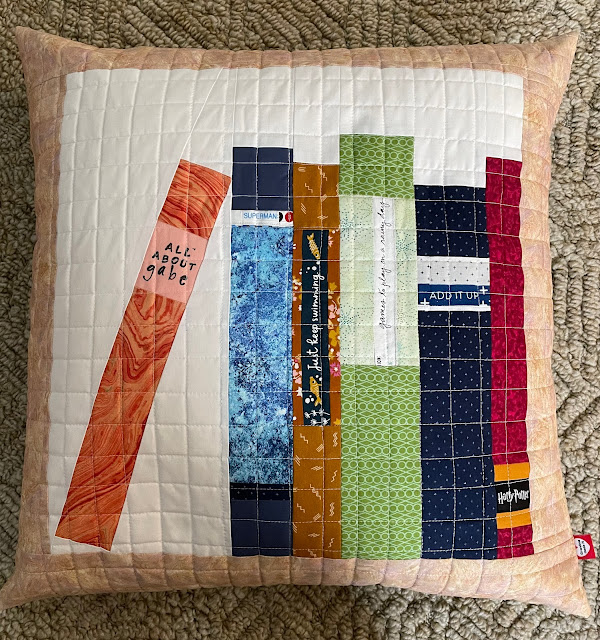 For the backing I used one of my favorite fabrics that looks like chalky graffiti. I only have a few scraps left. I'm going to be sorry when it is gone. 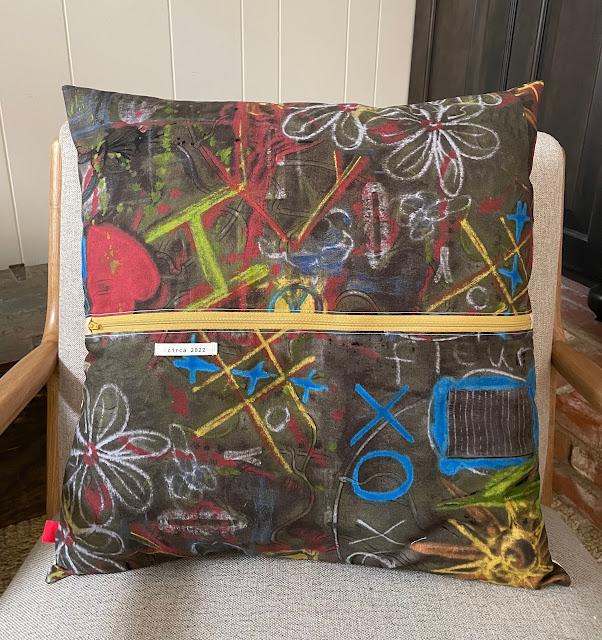 The "Grandma made it" label by Kylie and the Machine is the perfect touch (at least in my opinion--ha!) 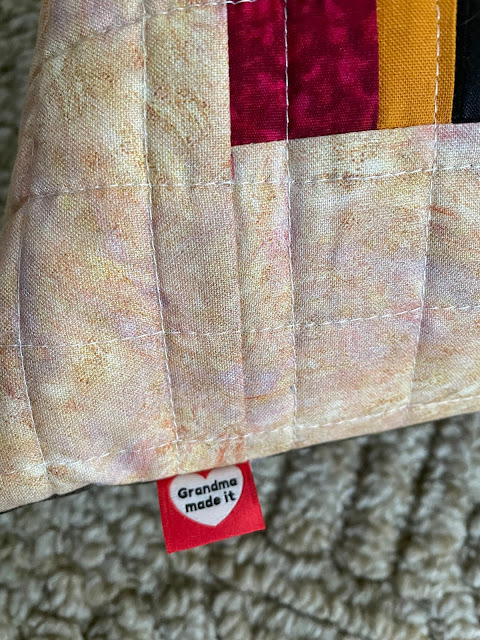 Anyway, I think he really likes it.
Friday night, while the guys were reffing football games, we had pizza and ice cream, along with Jill, Ruby and Amelia. 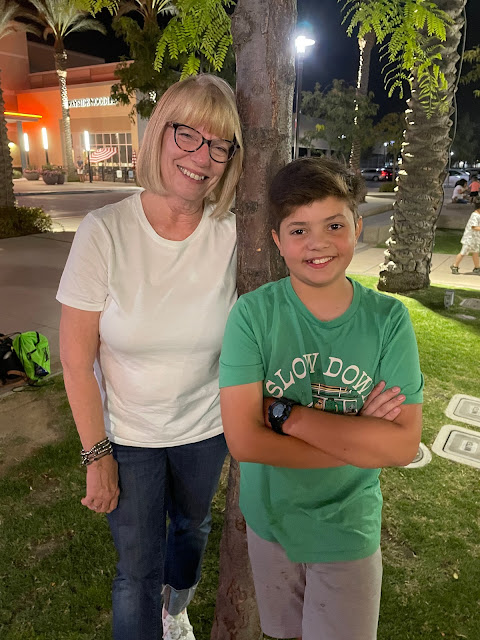 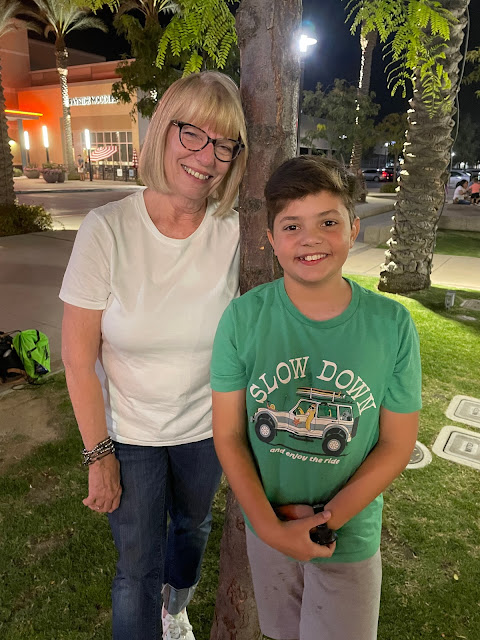 "Boo Batter" ice cream was a hit--I think because it turned their mouths black. Go figure... 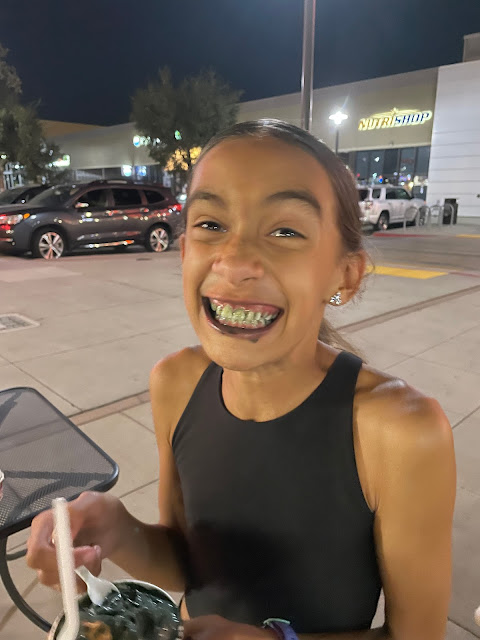 On Sunday, he had the family birthday celebration. We all had hamburgers after church. 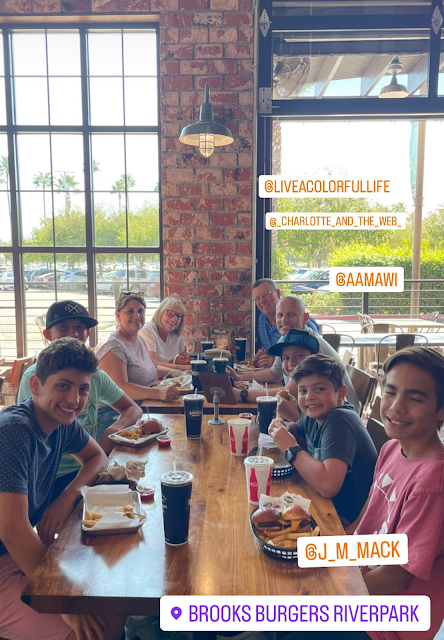 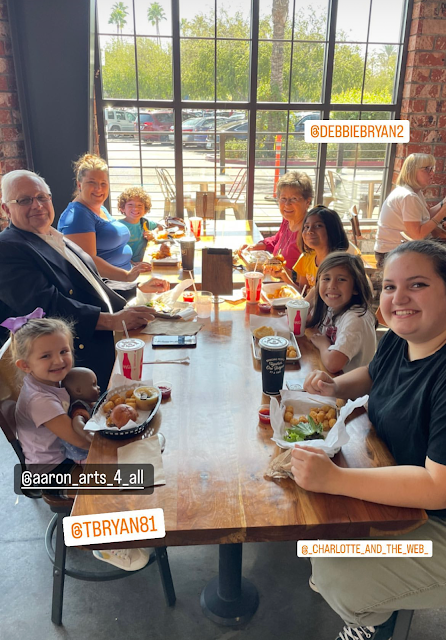 Even though all four grandparents bailed, the rest of them went to "Ghost Golf." Think indoor miniature golf with scary things jumping out at you as you play. Not too disappointed in missing that.
He had gotten some money for his birthday and found the best game called Escape from the Grand Hotel by Professor Puzzle. Highly recommended. Seriously. Put it on your Christmas list! It's basically an escape room type game in a box. Lots of riddles and things to figure out before you can move on to the next step. The game estimated playing time of 1 1/2 hours. It took us two hours to complete. So.much.fun. Actually Gabe said it was two of the best hours of his weekend. 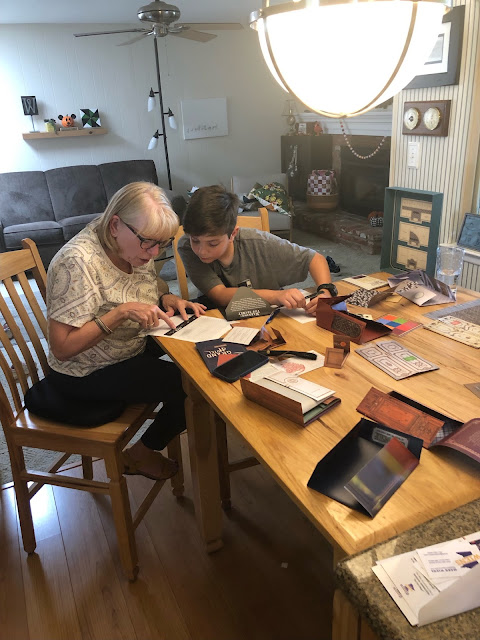 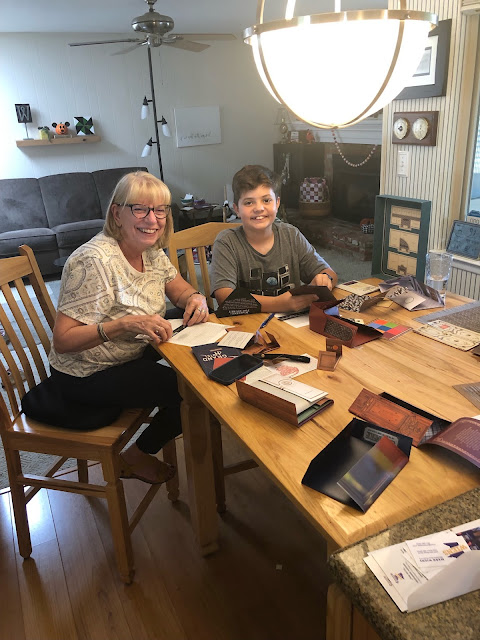 The next day after school the two of us went to Barnes and Noble. I had a coupon for a free birthday cookie for him and then we wandered around the store, one of our favorite pastimes since he has been little.
I was trying to take a good picture of him but he kept crossing his eyes. And then he confiscated my phone and took a couple of selfies. So I leave you with the many faces of Gabe. Goofy kid. I could not love him more--he is the best company. 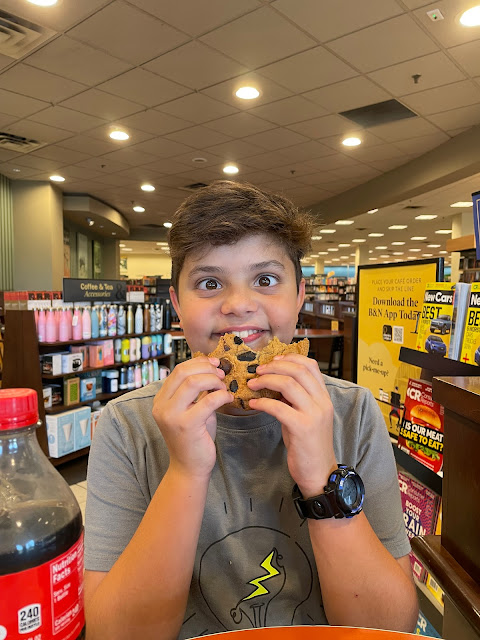 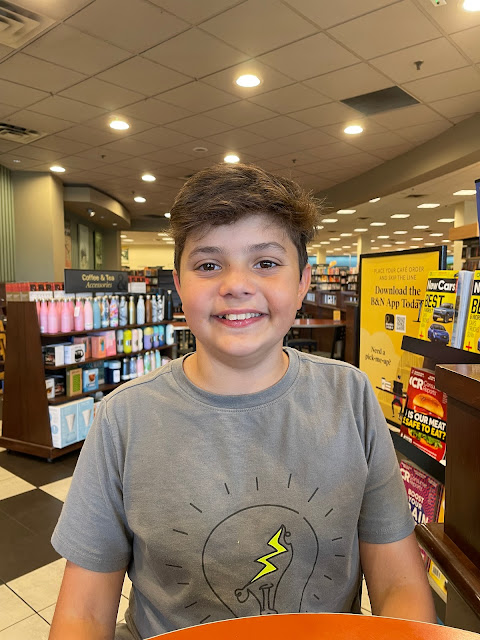 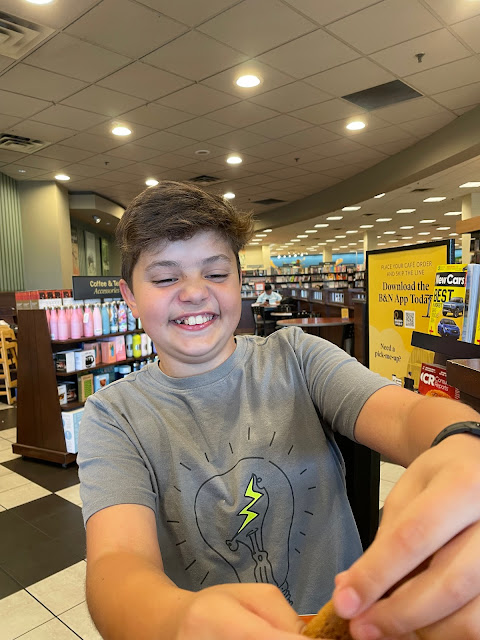 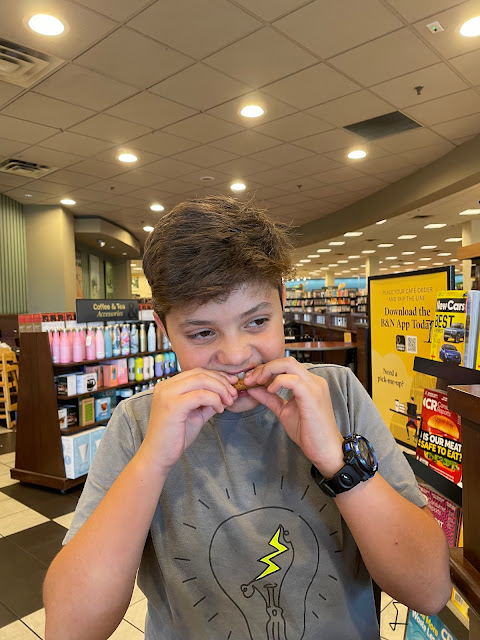 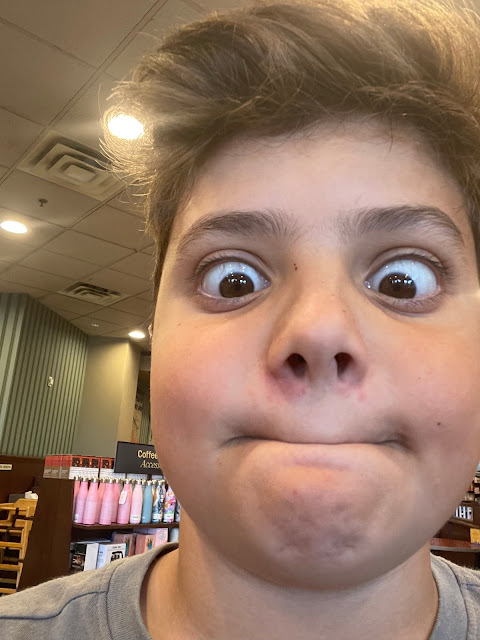 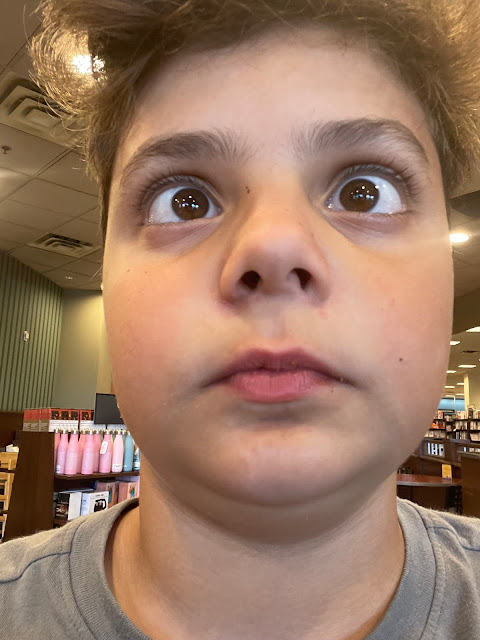 These are precious moments and I don't want to forget any of them.
Posted by Live a Colorful Life at 10/13/2022

Precious moments indeed! I'll put the game on a list to look into; thank you (and Gabe) for the recommendation.

I love the posts of the time you spend with your grandkids. That's the best part of growing old(er). Gabe is so lucky to have you two as grandparents...just as lucky as you are to have him. 3 of mine are too far away to spend time with but the 4th is a freshman and we get together when school and extra curricular activities allow. Last week it was orchestra concert and band concert on consecutive evenings.

So fun! The room looks beautiful. I’ll have to add the game to my list. Thank you.

oh cindy, a brilliant post and love the life you are leading. carry on dear lady and enjoy all of it. thanks for sharing.