I can hardly believe it is the last Thursday of October. Only two months left in 2022!

Last Friday I went to a quilting retreat in the mountains, at Hartland Christian Camp. It is a really beautiful camp, in the heart of the California Sierras, about a two-hour drive from Fresno. I went to summer camp there a couple of times in grade school, and in fact two of my uncles were part of the group that started the camp back in the late 1940s. Anyway, the number of quilters attending has grown to about 100, and we are spread out in six different buildings. 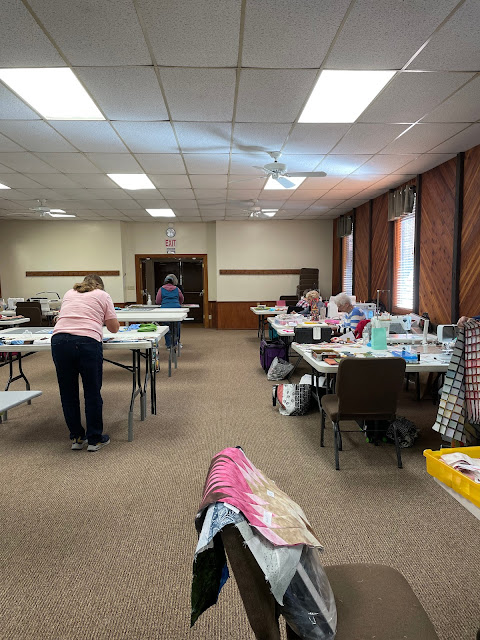 In our building, Redwood, we had plenty of space to spread out and sew without feeling cramped. The lighting was great and we had lots of windows so we could enjoy the trees surrounding us. And we had a good view of the zipline, which several women tried. Not me, though! The food was amazing. So.much.food. And every day at 10 a.m., 2 p.m. and 8 p.m. they come in with snacks, just in case we would faint from starvation. Ha.

My friend, Janice, worked on this fabulous flannel quilt, made with a jelly roll from a line called Woolies by Windham Fabrics. I think there might be an uptick in sales of this jelly roll because everyone who saw the quilt fell in love with it. Full disclosure: one of the first things I did when I came home was order the jelly roll to make my own. 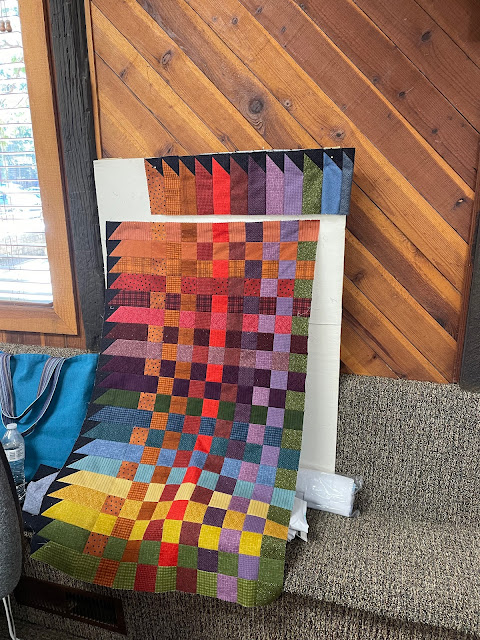 I worked on more pineapple blocks. Even though I sewed for two full days and part of another, all I finished was six blocks. They are super slow for me. I'm making a total of 30. I had miscounted and thought I finally made it to 16, just over the halfway point. But when I got home and counted, I have  made 20! Yippee. 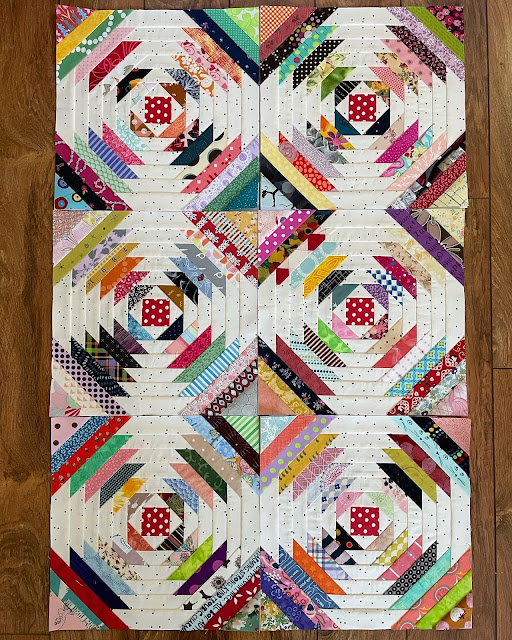 I took breaks to walk around the campground. The weather was just perfect--fall was definitely in the air.
My uncles had built this little cabin back in the day and it is now owned by my cousin. Mark has been helping to rehab it. Most of the exterior is finished and now on to the interior. It will be a sweet cabin when it is finished. 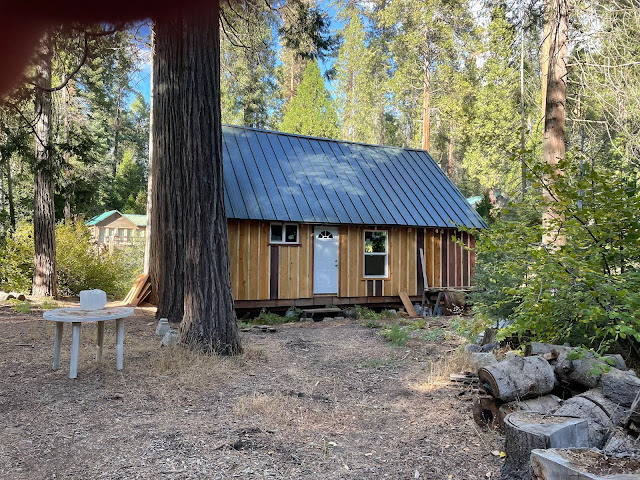 It was such a fun time away with friends. And of course I didn't realize until I got home that none of us took a picture. :( But here is a group picture. Our group of five is in the upper left corner, and I'm the one you can barely see... 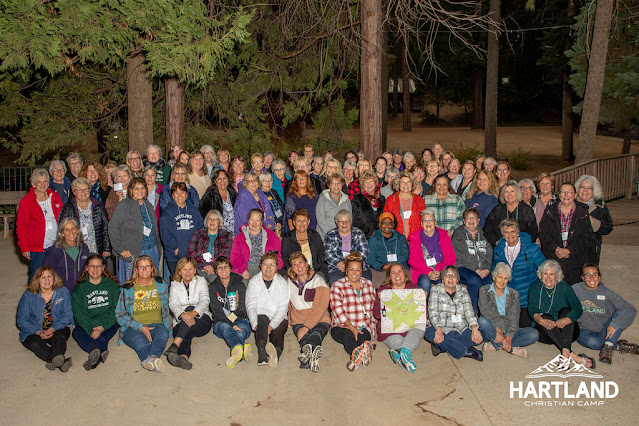 Mark made it in the local paper, the Fresno Bee. 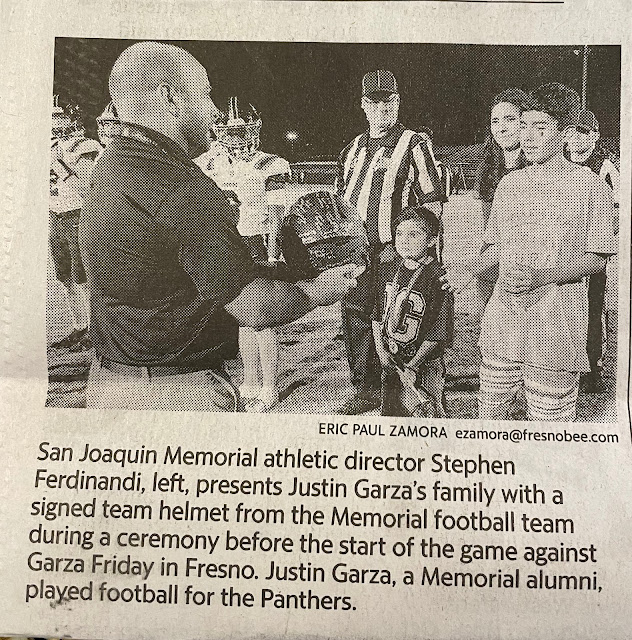 The other day I was picking the last of my favorite roses, Double Delight. I have never ever seen two buds on one stem before! Also, one of my favorite vases is a cool liquor bottle Aaron gave me--I love it because it says "The Botanist." 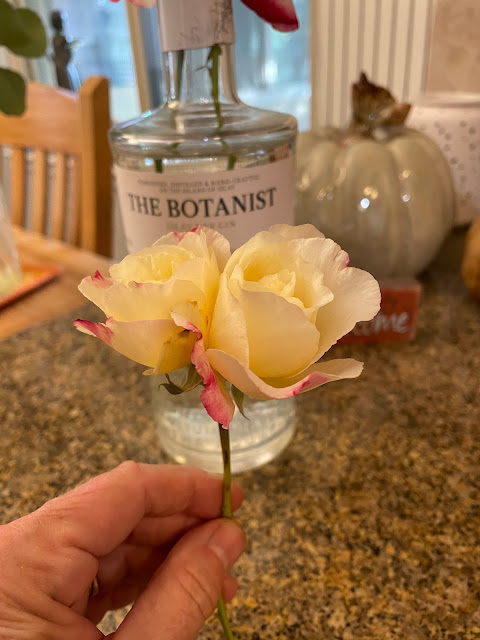 We did another little bit of updating. We took down a ceiling fan in the family room and put up this cool light. I have wanted a "sputnik" type light for years but we really never had a spot for it. But after deciding to take down the ceiling fan, we are both so happy with how it turned out. 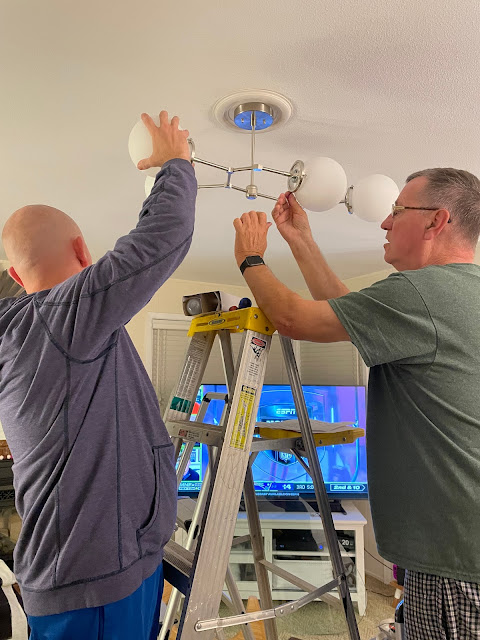 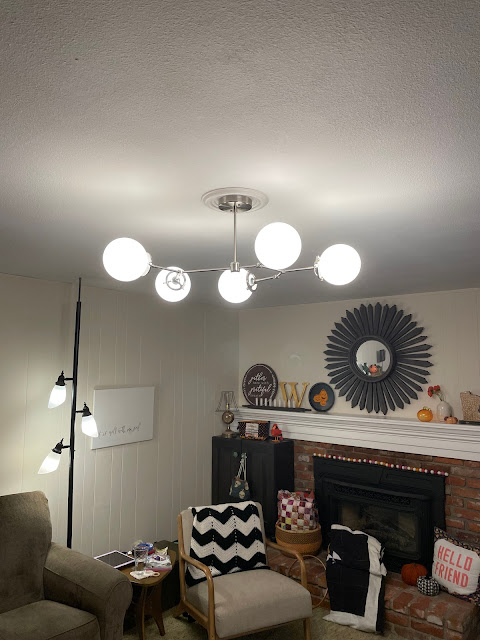 After years of collecting, I finally started working on my Hard Rock Cafe t-shirt quilt. I had put it off mostly because my collection is so large. When I decided to cut down some of the t-shirts into the name of the city only, mostly because they are all the same logo, I was able to get over 60 on the front. Now I have about 30 to put on the back and another project will be done, one that I have put off for years. When I received t-shirts from friends or family, I always wrote their name on the logo, so it has been fun to see where they all came from. I have some fun stories about some of them, and plan to document that on a label on the back.  Also I can finally stop collecting. Haha. 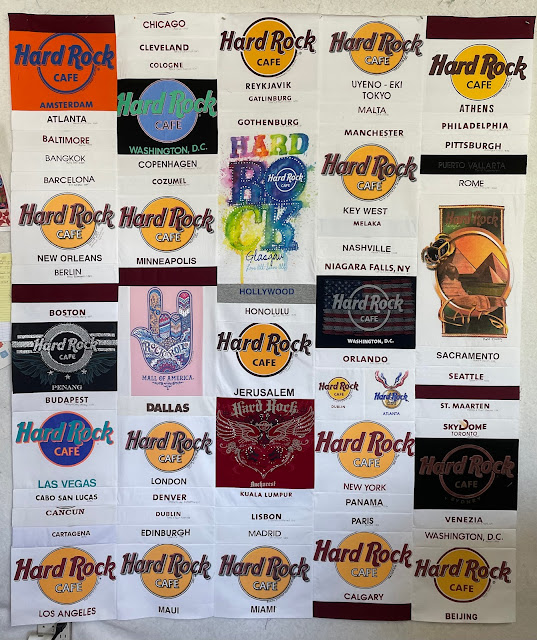 Congratulations on getting 20 pineapple blocks complete, that's great progress. I think I'd be pretty slow stitching them up as well. There are a lot of seams in a single block! I wondered if the Double Delight roses were named that because they typically have two buds on a stem, but it sounds like this was just a fun surprise bloom. And I think your idea to cut down to just the locations on many of the shirts for your Hard Rock Cafe quilt is the perfect solution. Hopefully the back is fun to put together, too. :)

That's a lot of Pineapple Blocks in one weekend~ you did great! They take forever, and yours are looking wonderful.
I made Dave one of those Woolies quilts, but it was in the old color way--this new one is so much better looking and the colors more vibrant. If I hadn't already done one, I might be tempted. What was the name of the retreat? And was that Janice--the Janice I know, too? So glad you had fun.

Love the light; it makes it nice and bright in there. You are styling!

Keep plugging away and you'll have those blocks done in no time. I think it always took me 2-2 1/2 hours to do a block with all the pressing and trimming. Are you still on track for no fabric repeats? Yay for your t-shirt quilt. I wanted to do one once, but never did. Don't think it's ever gonna happen.

Your pineapple blocks look so good. Keep going ... Looks like a beautiful place to retreat. 100 quilters is sure a lot of people though. I've been on retreat at the Y-camp outside Rocky Mtn Natl Park and it's so nice to be a beautiful setting. Did you visit all those places to get the shirts? It's going to be fun quilt.

Always a wonderful blog. Congratulations on completing so many pineapple blocks. I like the secondary pattern where the blocks come together. The T-shirt quilt is something I've never tried. I meant to with kids T-shirts but life just kept getting in the way. So kudos to you for the shirt and crossing something off your list. Your living room looks very moder with the new light.

Great post. Your pineapple blocks are fantastic. So many different fabrics! I love that you miscounted and are actually ahead of where you thought you were. The retreat was so much fun. The Redwood Hall was perfect. So much room, good light and great company. Your Hard Rock tshirt quilt is amazing. Your work is inspiring.

Gosh your retreat place looks beautiful! Love that wide open room. Don't berate yourself for making six quilt blocks. Those look very intense, and it's a positive that you didn't have to haul extra container and bags of other project along with you. That's gonna be a gorgeous quilt when it's done. Cute little cabin that's being fixed up. Is it meant only for get-away living? Does it have a bathroom? Your new ceiling light is really different! But won't you miss having a fan? I think I would. Very cool that you're sewing up all those t-shirts. I can't imagine collecting them, as I've never even been in a Hard Rock Cafe! I guess I'm behind the times on that score... and old. :-)