I began English paper piecing these blocks in 2017, a pattern called Mischief by Karen Tripp. The center fabric is a batik that spans the rainbow and I tried to use as many colors as possible and then chose coordinating Oakshott shot cottons. 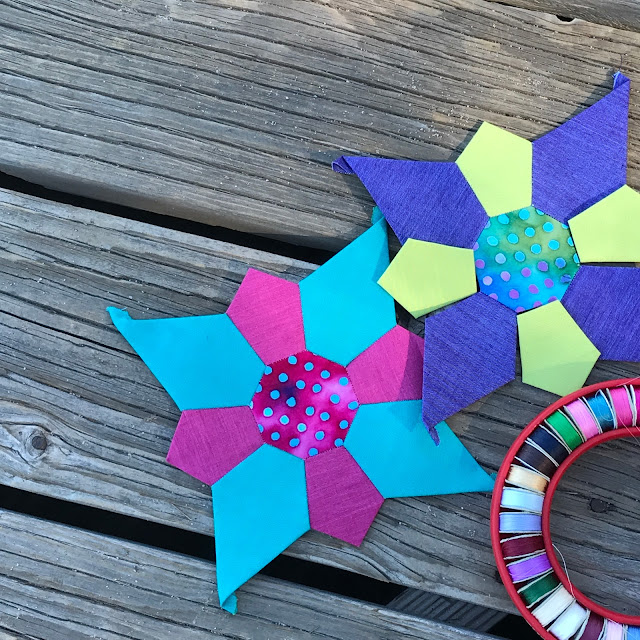 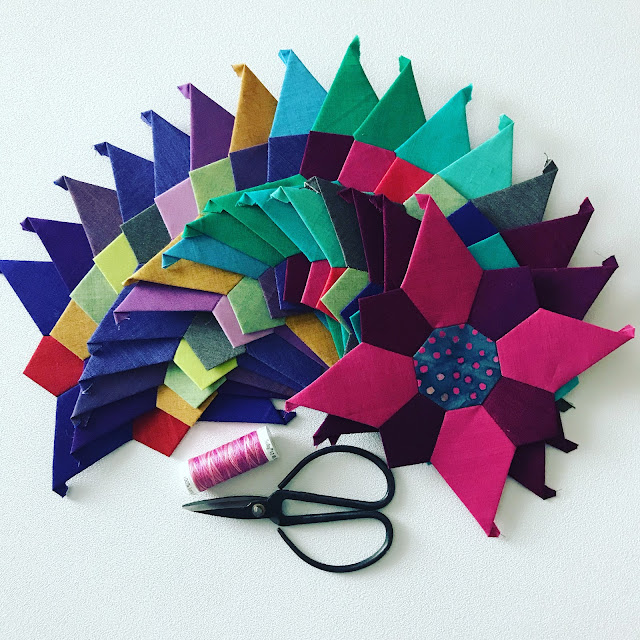 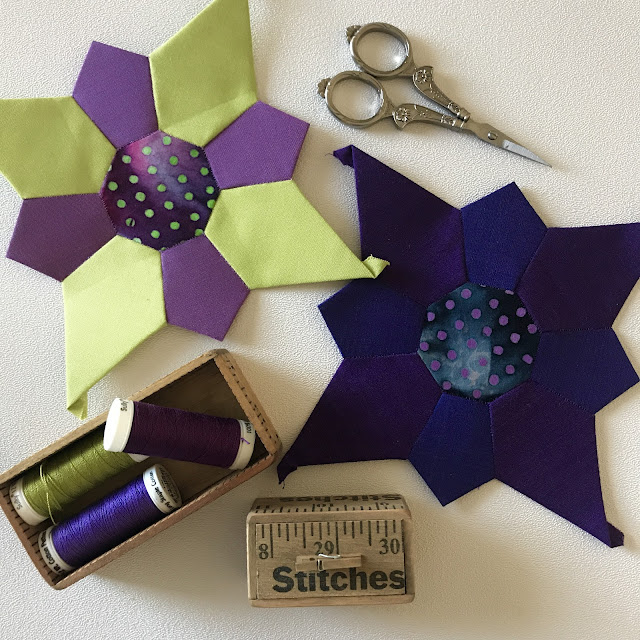 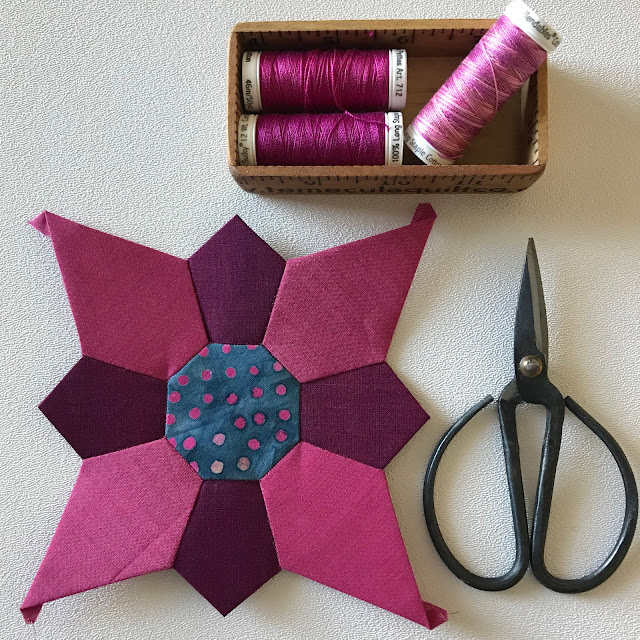 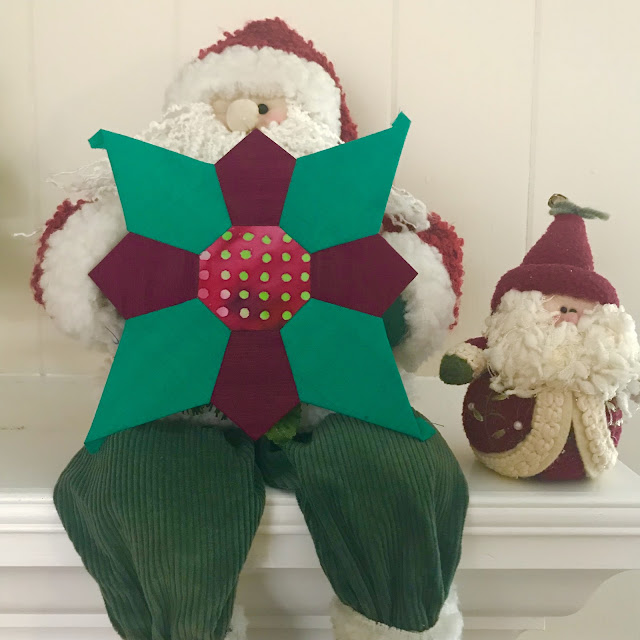 When I had 25 blocks, I decided that was enough for a center medallion. But what color to use for the background?

Cream? No. Way too boring. 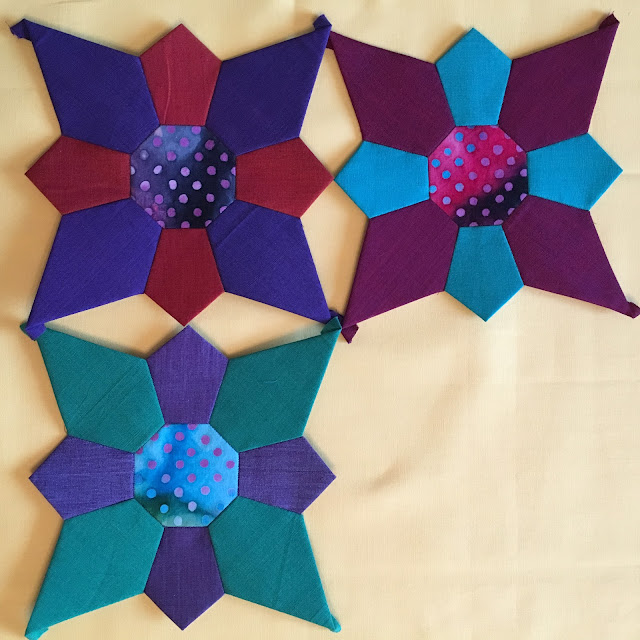 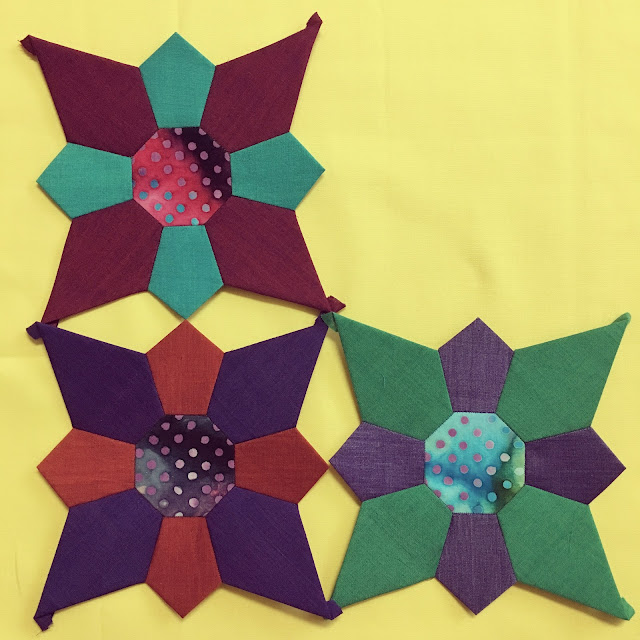 At one point I even thought maybe the batik would work. Again, nope. 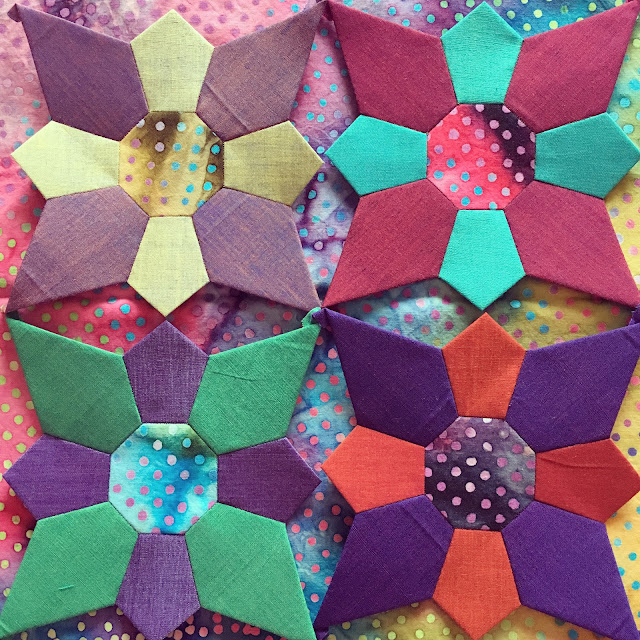 I needed something vibrant, something that would make the gorgeous Oakshott fabrics sing. I had a fat quarter of Kona Cotton in Grellow and as soon as I tried it, I knew it was the winner. 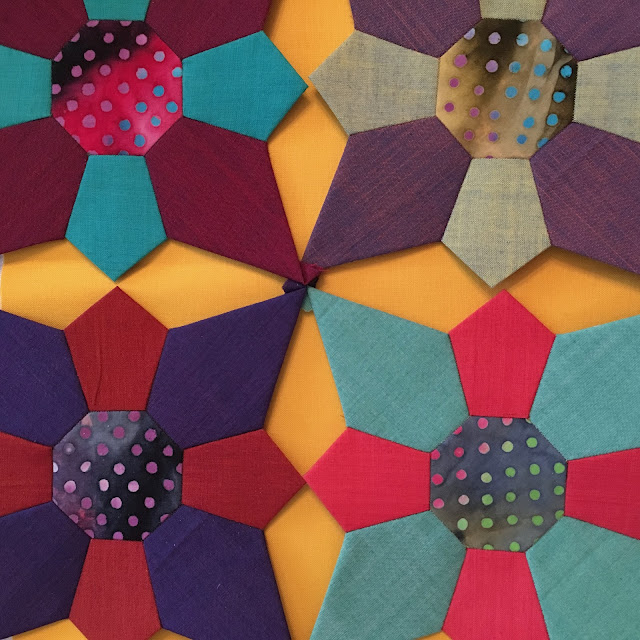 I pieced the center medallion and was thrilled with it. 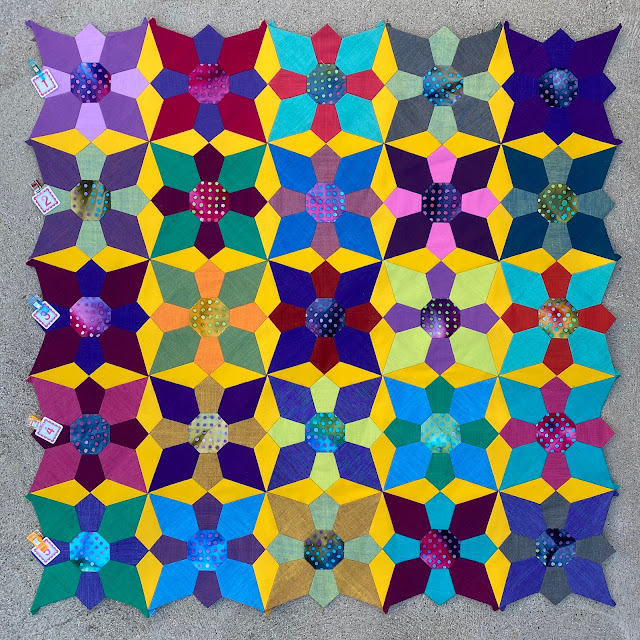 But what to do for the next step? I had some Kaffe Fassett stripes and I thought that might work as the next step. Overpowering. 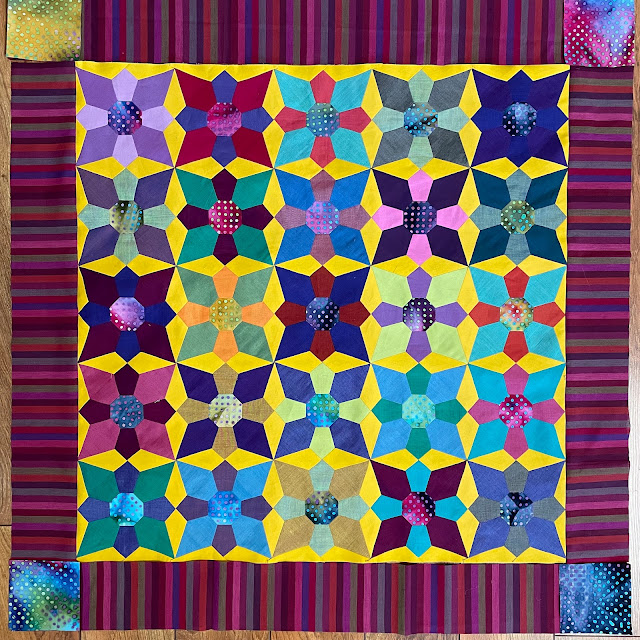 Smaller striped border, then dark green border and then checkerboard? Still not right. 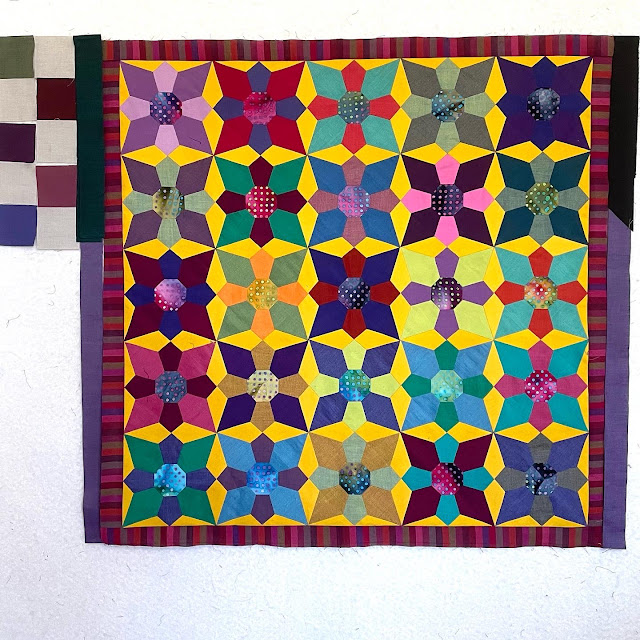 My dear friend, Elizabeth (opquilt.com) came to the rescue with the idea of staying with the yellow and making 3" square-in-a-square blocks. Brilliant. 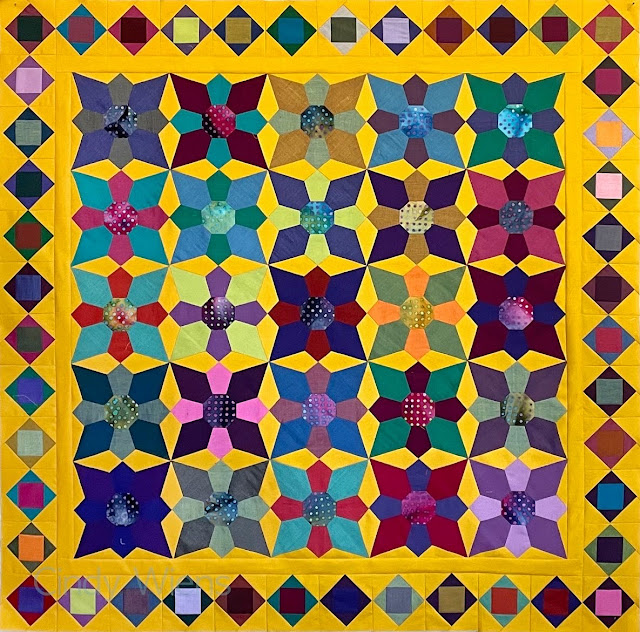 Now what? Shades of purple? Green? Stripes? I was fixed on that stripe and kept trying to work it in, but it just wasn't right. 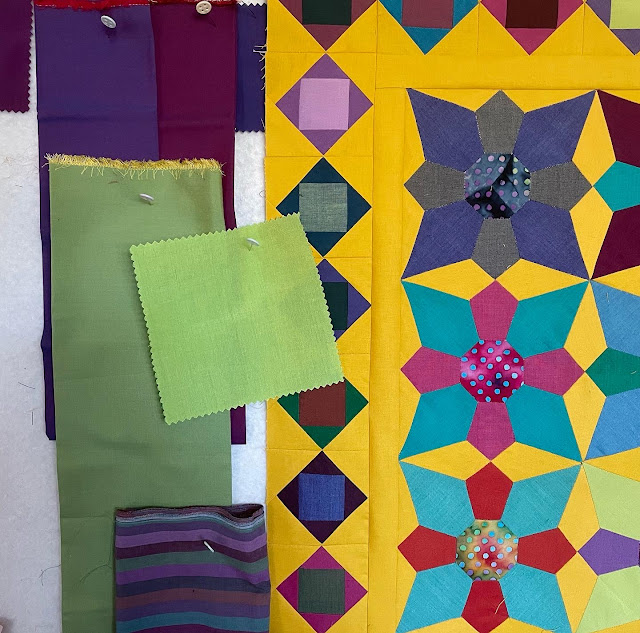 I decided to keep going with the yellow. And added a skinny turquoise border before the next pieced border. 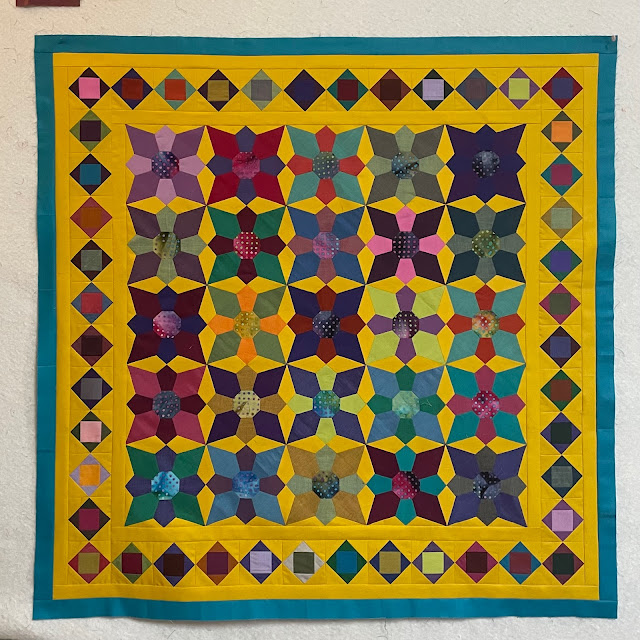 I decided to pull a shape that already existed in the quilt as inspiration--the hexagon in the center of the original Mischief blocks, but to use just half the hexie and make a gradation of colors, then another skinny yellow border and finally the striped border I had wanted to use way back in the beginning. 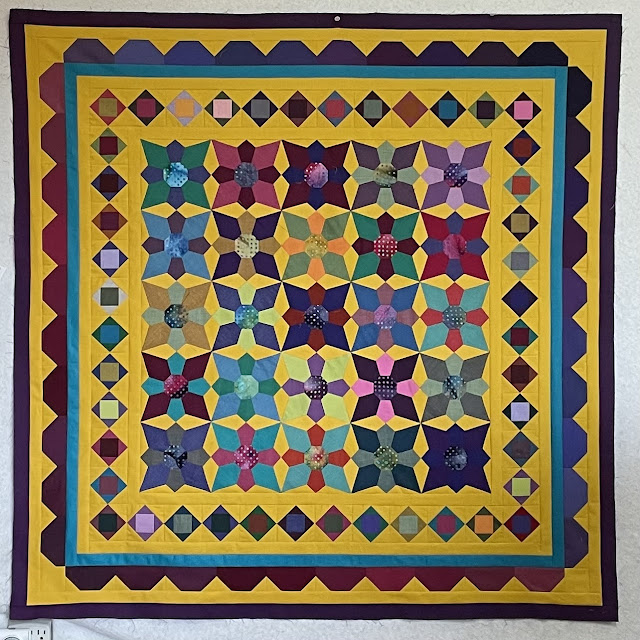 I felt like it needed just one more pieced border, so I got out my graph paper and started sketching some ideas. Again, I used an element already in the quilt as inspiration, the square-in-a-square blocks, and then finished with another skinny border of the Kaffe stripe. 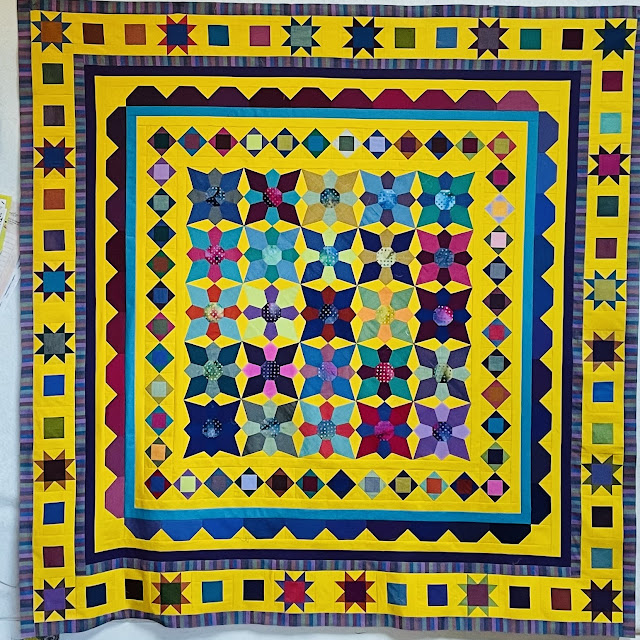 Things about this quilt: (1) I never ever intended to make a yellow quilt. But that saturated color just worked with the gorgeous, luminous shot cottons. (2) I don't think I've ever had to work so hard to make one border flow to the next--each took so much trial and error and there were many times the quilt screamed at me "No!! Go back to the drawing board and try again!"
But once it worked, it worked well.
I do not often get quilts custom quilted, but this quilt definitely deserved a special touch. And did Dawn Haldeman ever deliver! It is absolutely stunning. So many beautiful details. 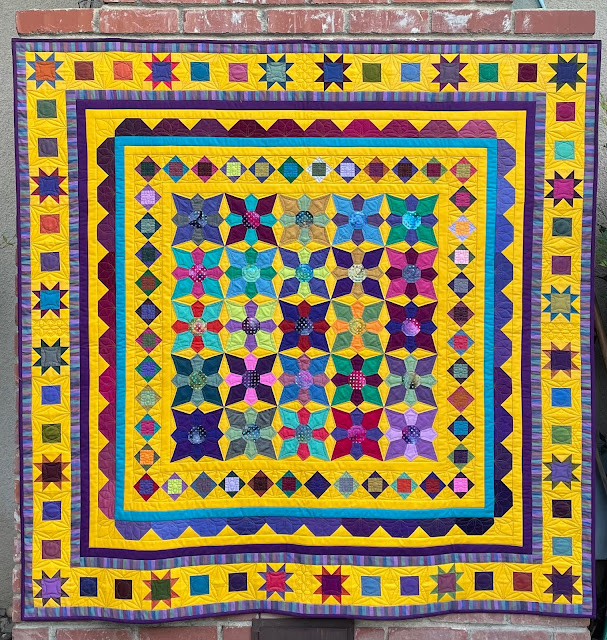 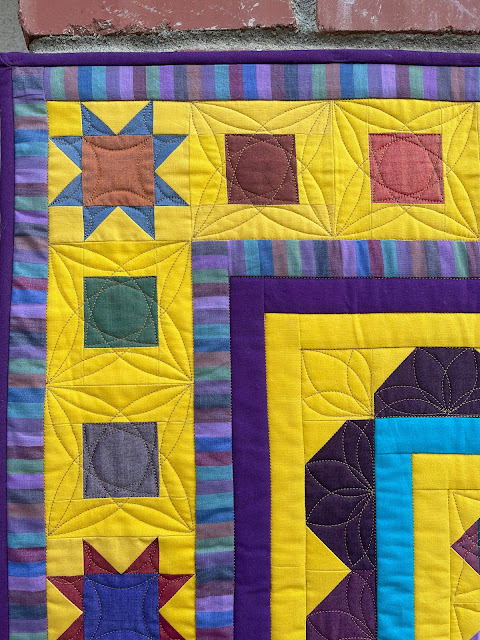 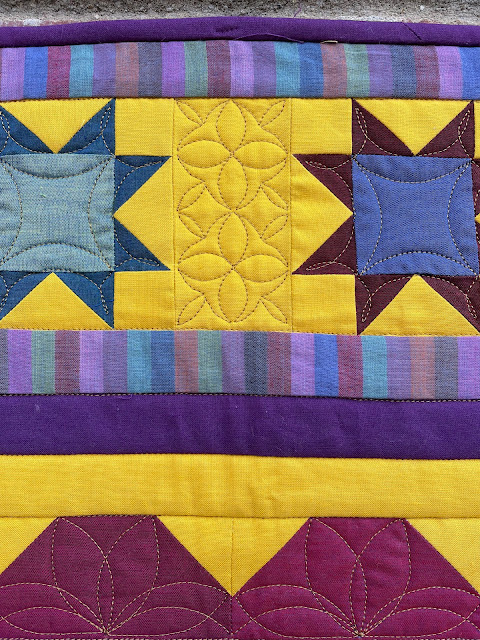 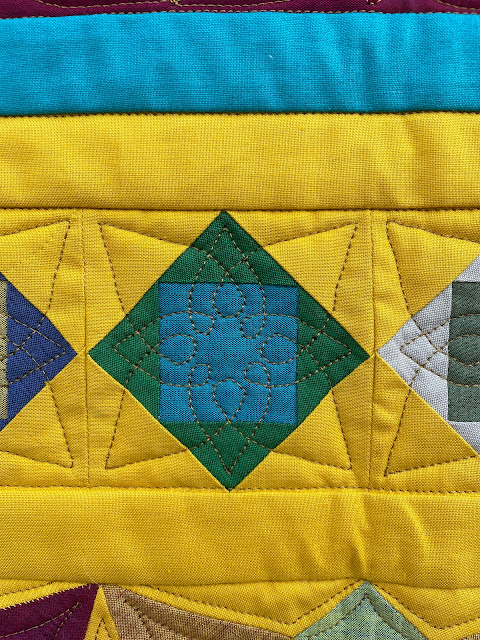 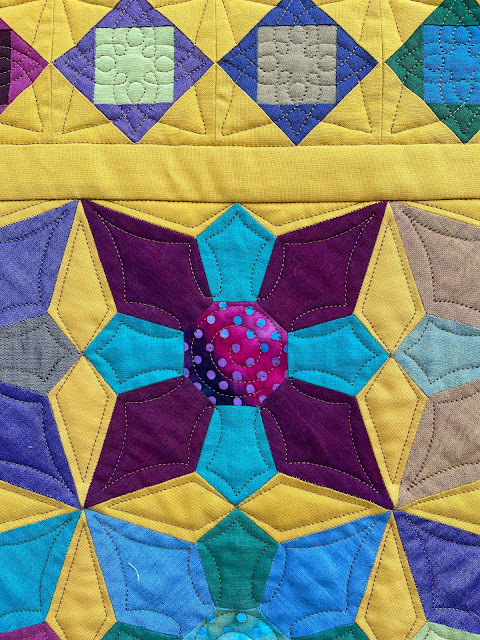 I used some of my favorite Anna Maria Horner prints for the backing. 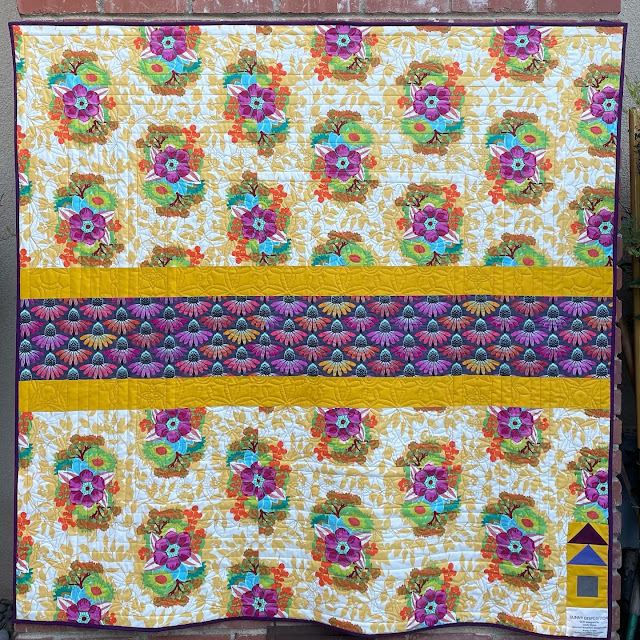 This quilt required me to really think of design elements and it paid off. My mood was not always sunny while working on it, but now that it's done, it makes me so happy.
Quilt: Sunny Disposition 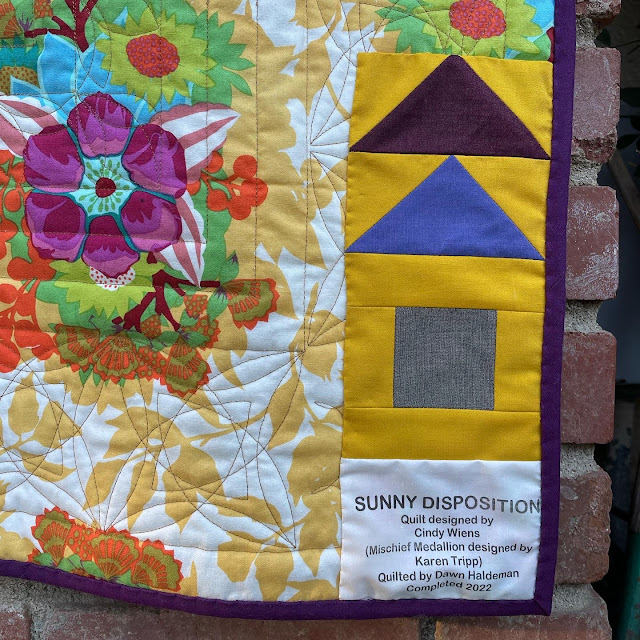 This is absolutely one of my favorite quilts. I especially love the process of getting from start to finish. Wonderful Cindy.

Wow! It's gorgeous. I appreciate all of the hand stitches. Love your colors.

I'm speechless because I love this quilt. It's so vibrant and happy.

Wow! Your patience in figuring out the borders really paid off. This is a terrific quilt! I love to use stripes in quilts - they add so much energy somehow - and the way you ended up using that KF stripe in this one seems to me just right. Congratulations!

Whoa! That IS striking! Your decision to use Grellow as the background was the perfect choice. From personal experience doing the same, I understand and appreciate how much effort you expended to make each round suit the quilt center, and to make the maths work out! Goodness there's sure a lot of thought and piecing that went into this one. Dawn's quilting makes your work look even better. Well done all the way around. And yay you for finishing something started in 2017! It's a very satisfying feeling isn't it? I hope this beautiful quilt gets many years of appreciative use.

I really love how this one came together, and the quilting is the icing on the cake so to say. Some quilts really do tell you very emphatically what will and won't work, don't they? I'm so glad you took the time to listen; this is stunning quilt.

I have some of that gorgeous Kaffe stripe, too, and I've never managed to use it. Maybe serapes in a pictorial? I like how your quilt turned out.

Your quilt is gorgeous! I love the grellow, a color I wouldn't have thought of. Love EPP.

I am always impressed with the quilts you make. This is no exception. Thank you for the photos of all the background, borders and designs you were experimenting with. It's really hard when the quilt yells "NO" but doesn't say what it really wants until you stumble across it. The quilting is beautiful and really adds dimension. I can say that this is a keeper, at least for now. Congratulations.

Cindy, this quilt is so fun to see how it grew and read the thought process behind it. It turned out beautiful!!