We ended last week by going to Charlotte's fall performance, The Plot, Like Gravy, Thickens. Such a funny name. It was a murder mystery set in the 1940s and Charlotte's character was the sister to the murder victim. We might be biased, but we were not the only ones who thought she played her part the best of anyone. 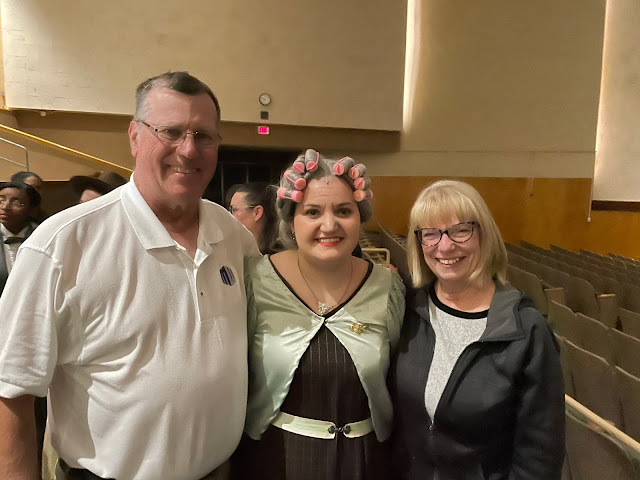 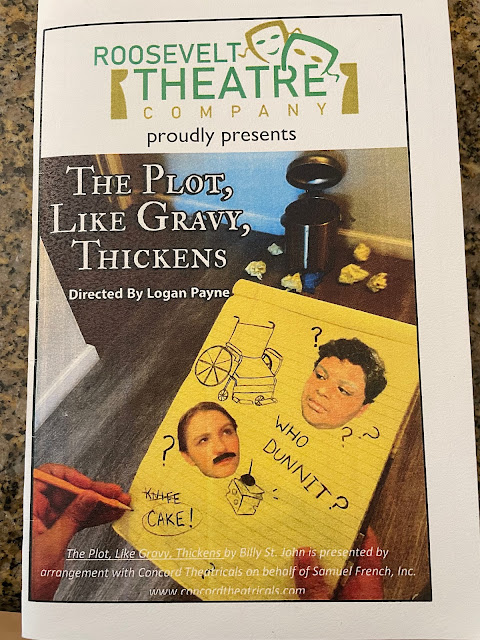 Mark's brother, Scott, and wife LouAnn, flew in on Sunday for a few days. They had come to southern California to attend a wedding and then flew up to Fresno.

We were lucky to squeeze in a few minutes so they could meet Aaron, Christa and the kids (all but Charlotte because she was at her Sunday matinee performance). Schedules just did not coordinate to spend more time together because we spent most of our time with Scott and LouAnn at the coast. Anyway... 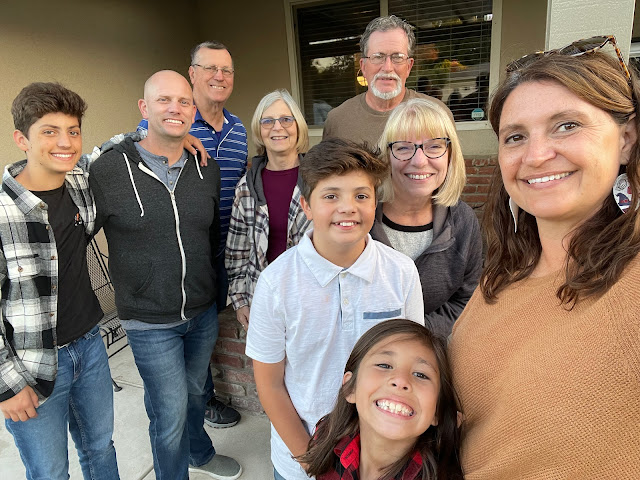 We left Monday morning and had lunch at one of our favorite restaurants in the Cambria area, Moonstone Bar and Grill. 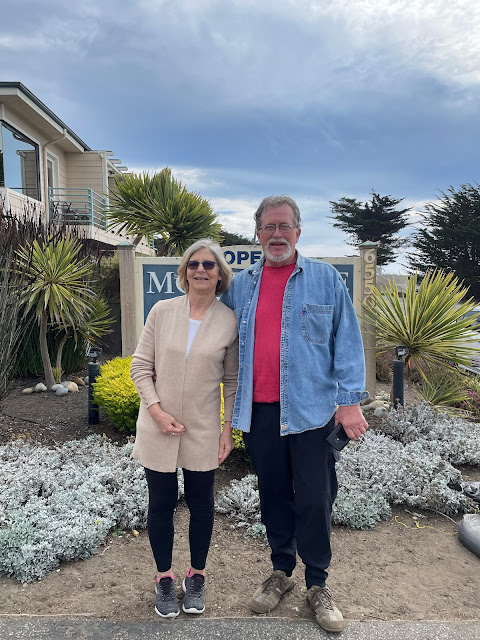 Then we headed to the Hearst Castle for a tour. 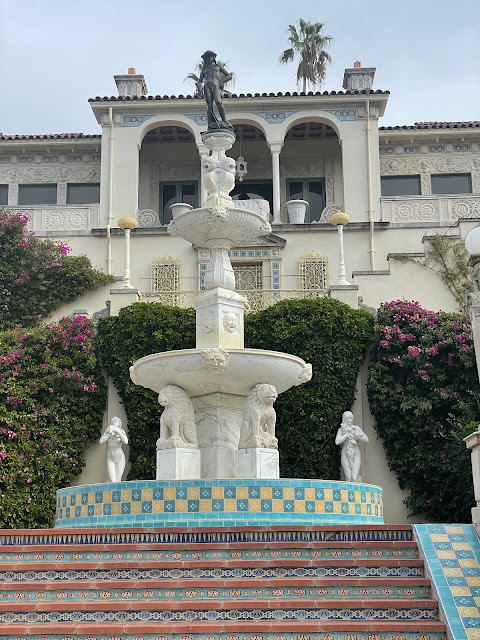 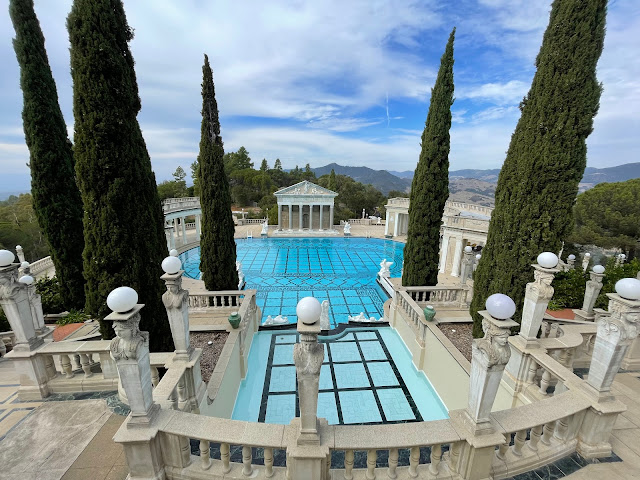 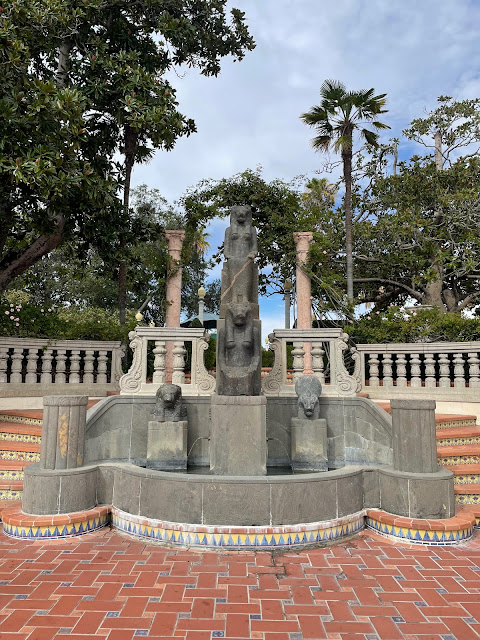 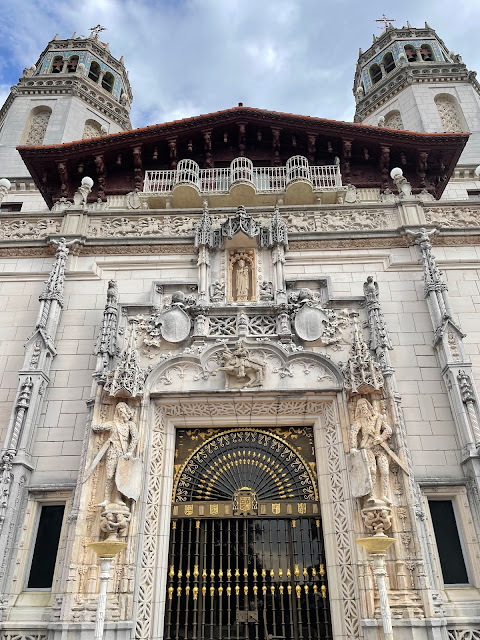 We spent the rest of the time, Monday afternoon through Wednesday morning, at Pismo just enjoying the ocean.
We had dinner at a restaurant near the Pismo Beach pier, and the waiter took this lovely sunset photo of us: 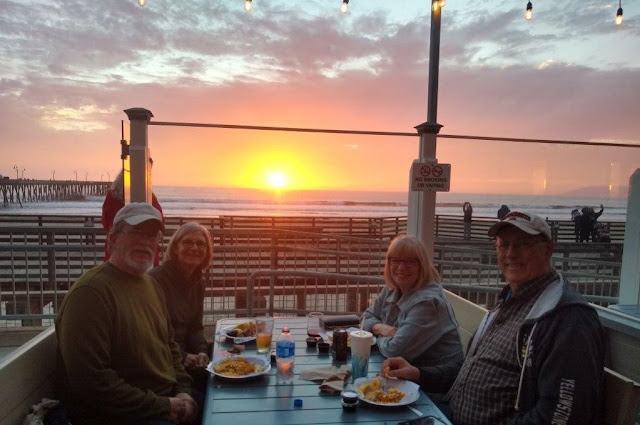 We did drive into San Luis Obispo for lunch on Tuesday. This was outside our restaurant. 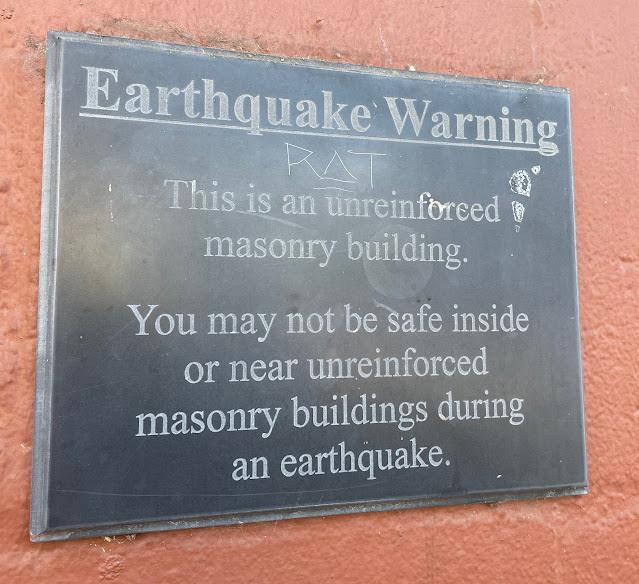 I love vintage clocks. This one also has some good advice. 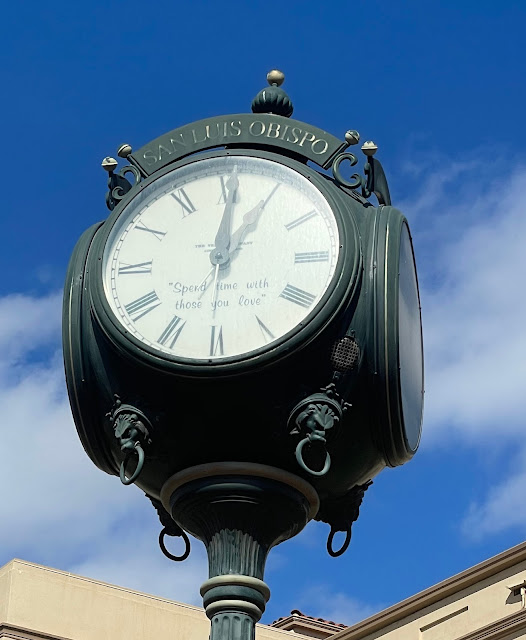 Of course, we had to take them to see the iconic Bubblegum Alley, which, frankly, is pretty gross, a 70-foot alley of chewed gum. 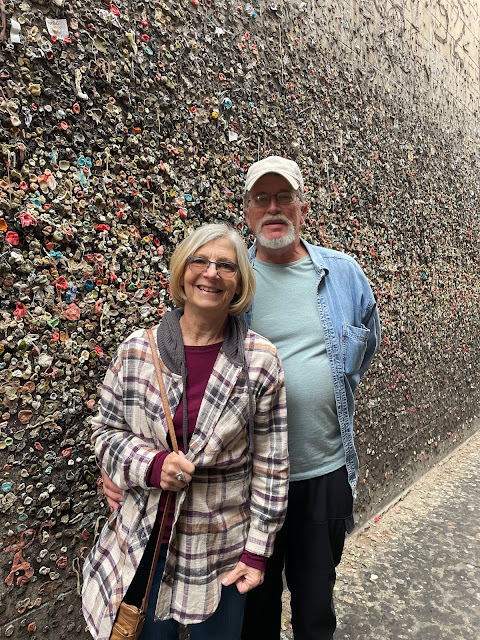 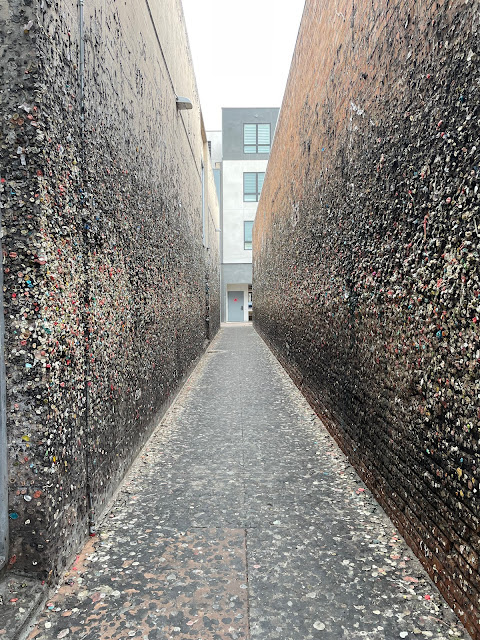 Of course, the sunsets did not disappoint. 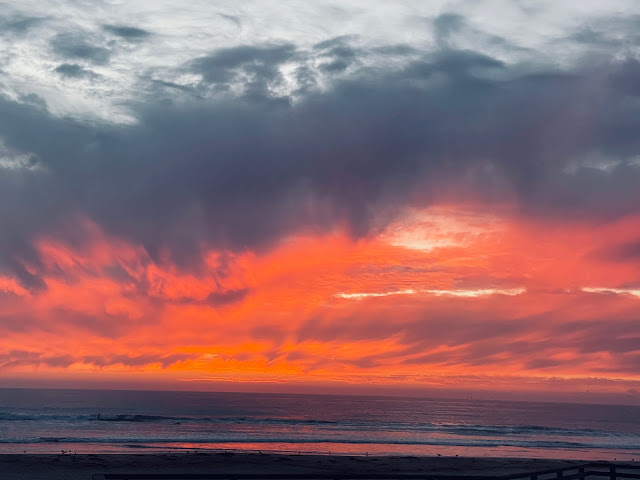 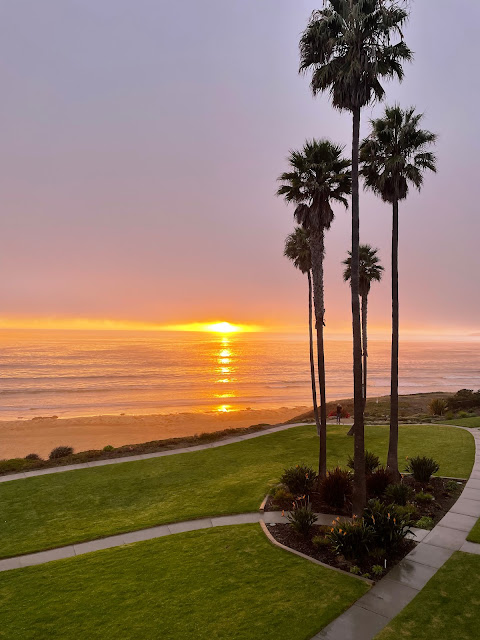 We all enjoyed the relaxation of just watching the waves.
I did not finish as many books in October as I have in other months, only six. Part of the reason was that I started reading two books and just could not get into the story at all. There are so many books on my list to be read that I am not one of those people who will finish a book I dislike just on principle. These are the ones I read in the month of October. I really enjoyed The Violin Conspiracy and Ellie and the Harp Maker. The Thursday Murder Club was a light murder mystery. I would recommend Verity except it was a little more explicit than I enjoy, but the story line was a good one 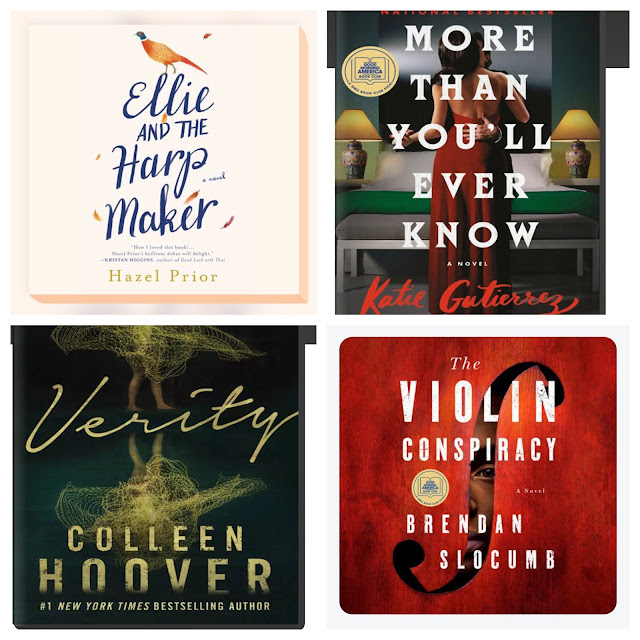 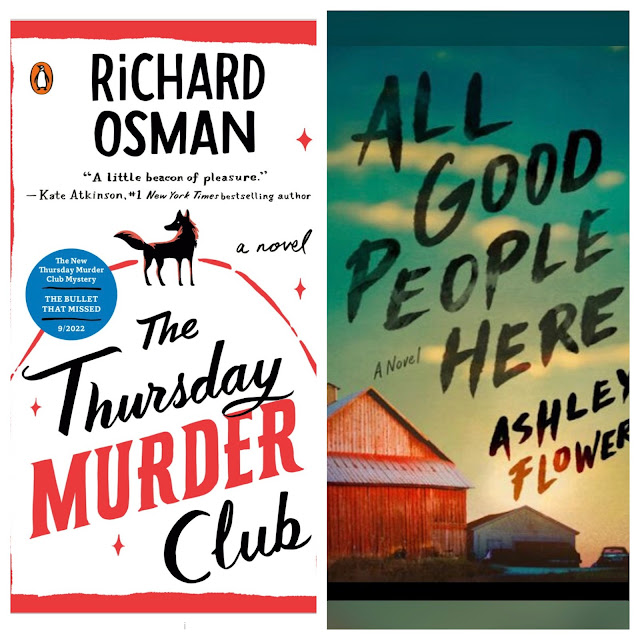 We usually spend Halloween evening at Aaron and Christa's in their driveway, enjoying the fire pit and hot chocolate while the kids are trick or treating, but we were out of town. Looks like they had a good time as usual. 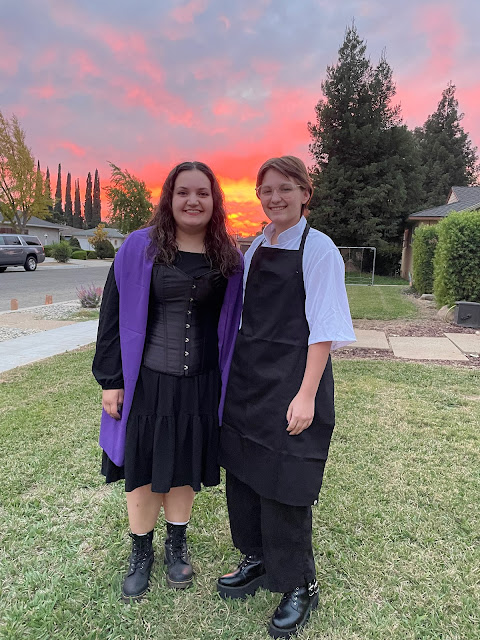 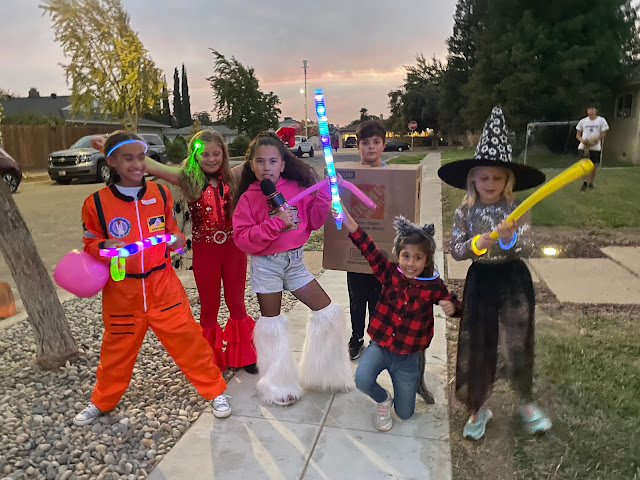 (Halloween photos by Christa Wiens)
How was your week?
Posted by Live a Colorful Life at 11/03/2022

The sunset photographs from the beach look amazing. So glad you got a chance to visit with family, even if it wasn't as long as you would have liked.

Charlotte is so talented and it is wonderful the way the whole family supports her. The trip to the beach is always great and the scenes you posted are wonderful. Love the "go-go" girl costume!! I'm glad you got to visit with family.

It's wonderful to see how you participate in family activities, spend time with grandchildren, and just enjoy meaningful time with family. Personally, I can only imagine it. How great that you visited the Hearst Castle. Wow! I can only imagine (You can tell I spend a lot of time imagining how others live!) how amazing it would be to actually live in a place like that. Really interesting information about how airport parking garage spaces are monitored. I wonder if that's done anywhere else.