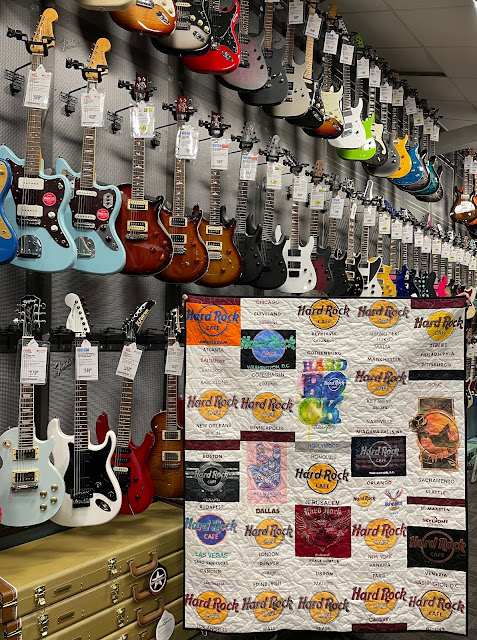 I think I began collecting Hard Rock Cafe t-shirts back in the 1980s. The first one was probably either from San Francisco or Dallas. I'm really not sure when I realized I had a "collection" and things kicked into high gear.

I began adding more t-shirts, and friends and family began adding to my collection as well. I always told travelers not to go in search of a HRC, but if they happened to pass by one, to please get me a shirt and I would reimburse them. I have documented each shirt with the name of who added it to my collection, along with the date.

My friends and family have traveled the world. And there are some interesting stories behind the 95 t-shirts  (!) that are included in this quilt. 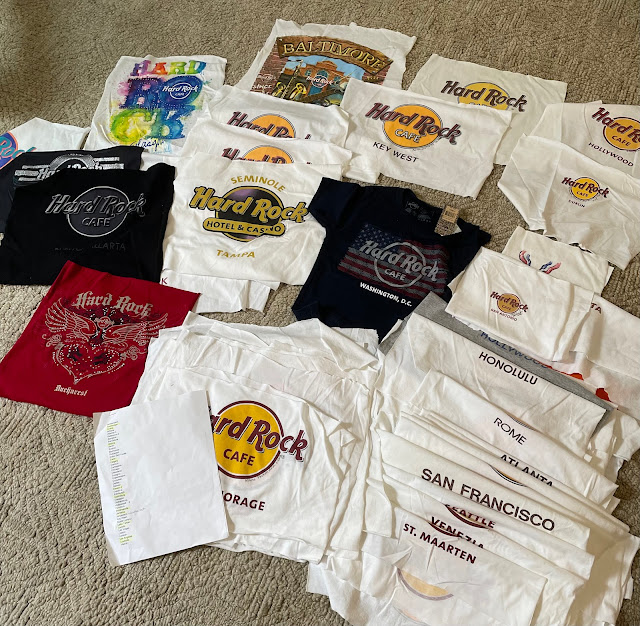 I put off making the quilt for many years because I just knew it was going to be enormous. But because most of the t-shirts are the "classic" style with the logo and name of the city, I decided to conserve space by using the city name only. Once I had a plan, the quilt went together really quickly.

Ready for some information about this quilt?

The very first HRC was opened in London. The first HRC opened in the United States was in Los Angeles.

I have t-shirts from Vancouver, Calgary, Montreal and Toronto, but the only HRC currently open in Canada is in Niagara Falls, and I don't have that one, although I do have the American side.

I have a couple of "counterfeits": Jerusalem and Athens.

My friend, Maggie, was visiting Beijing, a huge city. She took a taxi to HRC and then charged me for the taxi ride. :)

My parents got me a t-shirt from New Orleans one week before Hurricane Katrina leveled it.

Mark and I took a bus ride to the HRC in Lahaina on the island of Maui during rush hour, and were a bit concerned that we would not make it back to the cruise ship in time.

While on a tour in Cartagena, we briefly left our tour group to pop into the HRC, and when we came out, we weren't sure which direction the group had headed--a few moments of panic.

I have received the most from Aaron and Christa, either separately (she spent a semester in the UK) or together. In fact, the last one I received was from Aaron when he and Stacie visited Iceland in September 2022.

Quite a few of the t-shirts I have (by my count, 28) are from locations that have since closed so this is definitely a collector's item. Also, at roughly $20 per t-shirt, this is definitely the most expensive quilt I have ever made!

Mark and I took the quilt to the Guitar Center, a local business that sells electric and acoustic guitars, among other things. It was just the perfect backdrop! 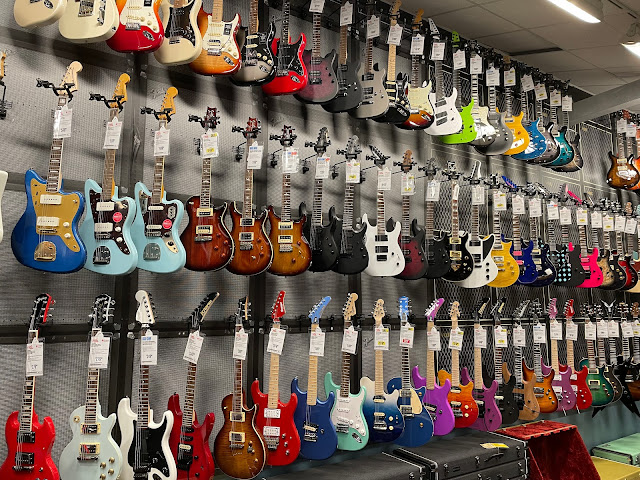 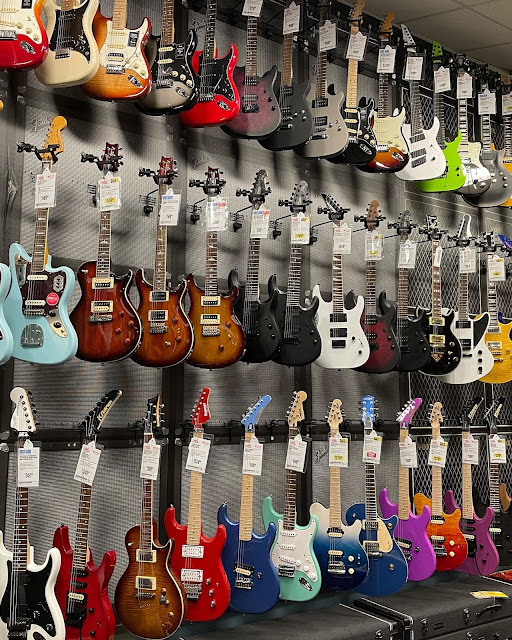 For the back of the quilt, I added a border fabric with electric guitars, and Darby used a music note motif for the quilting. I'm so thrilled with this quilt (and I'm glad that the collecting has come to an end).

This quilt would not have been possible without all the cool t-shirts from around the world. 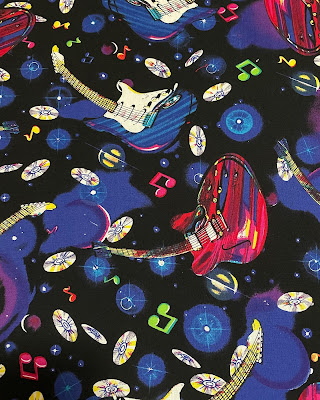 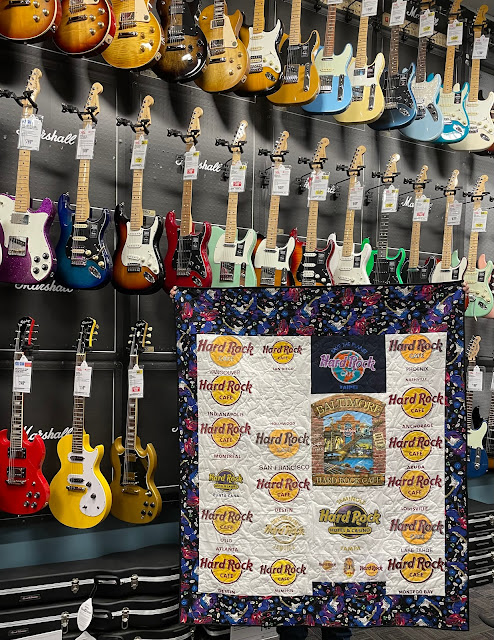 Email ThisBlogThis!Share to TwitterShare to FacebookShare to Pinterest
Labels: rock'nroll

And people think quilting cotton is expensive! It may be an expensive quilt, but one that is packed full of memories, which cannot be beat. Congratulations on completing your collection and quilt. Merry Christmas and may 2023 be kind to us all!

That is one amazing quilt and I really enjoyed hearing the details of everything. I don’t usually comment but I read your blog faithfully. Always so interesting and you and your families closeness is heartwarming. Have a Merry Christmas and a Happy and Healthy new Year!

Amazing quilt and story! Thanks for sharing.

What a cool quilt. I love the location you chose for the photo - it’s just the perfect backdrop. But I have a question… what in the world are you going to do with the backs and sleeves of all of those t-shirts? A person can’t possibly use that many dust rags! I hope you and your beautiful family have a very merry Christmas.

This quilt will always bring you wonderful memories with all the locations and people that contributed. Very very special.