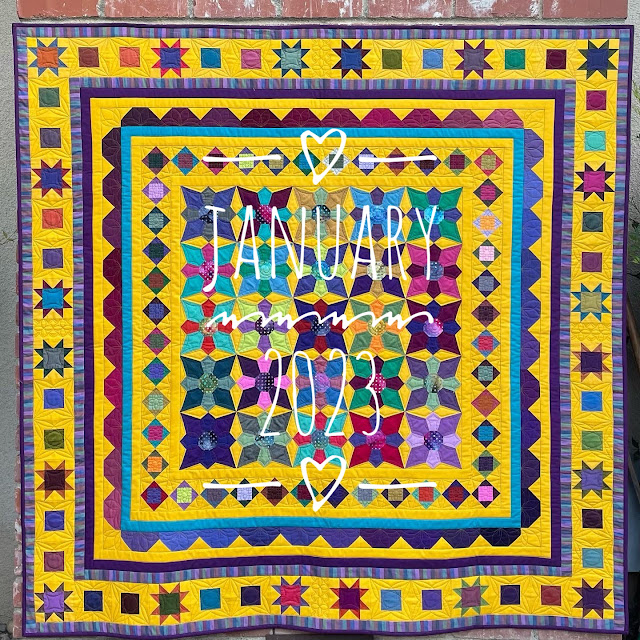 Here it is, almost the middle of January already. A few people asked if I had made a quilt calendar for 2023. The answer is "kind of." For my first two calendars, I had a theme. I have two more themes in mind, but I just didn't get around to photographing the quilts. But because Mark and I still needed a calendar, I kind of put something together and had 10 copies printed at zazzle.com. Nothing professional, that's for sure. But I'm thinking ahead to 2024.

We began our new year with family at the beach house in Oceano, on the central coast of California. Jason was not able to come this year because of basketball games and we really missed him.

The hills were so beautiful on the drive over. We rarely see them green like this--usually they are all dried up. 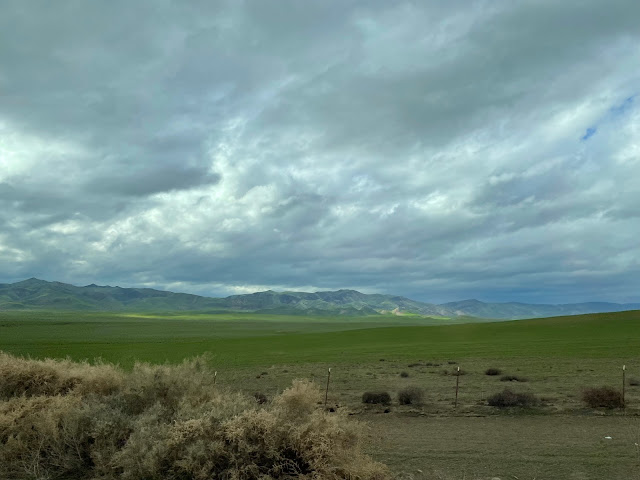 If you have been watching the news, you know that California, a state usually in a drought situation, has been getting so much rain. So we knew we would most likely be spending a large part of our time in the house rather than out by the water. The beach was actually closed most of the time we were there because of the dangerous high tides. 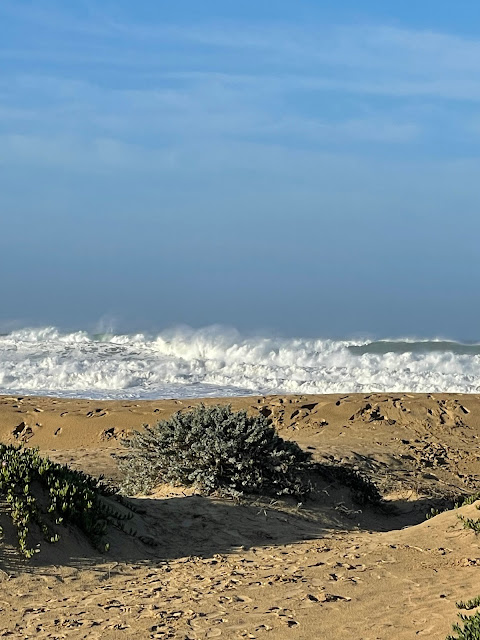 But we had lots of games to play. And while we don't normally do a lot of "devices," we also had the Nintendo Switch and the VR. Have you ever watched someone when they are on a VR? It's pretty comical. 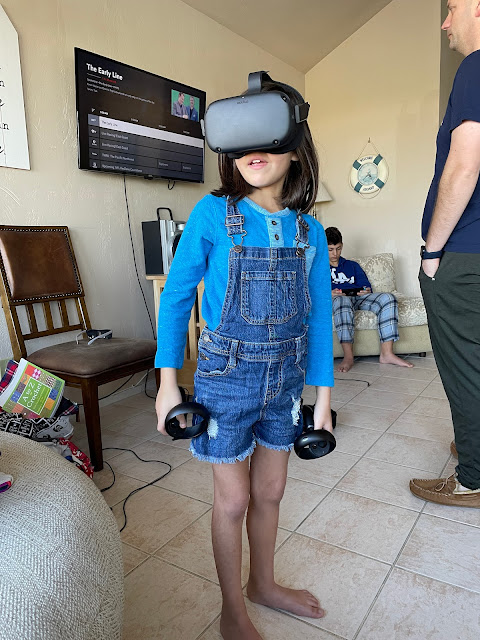 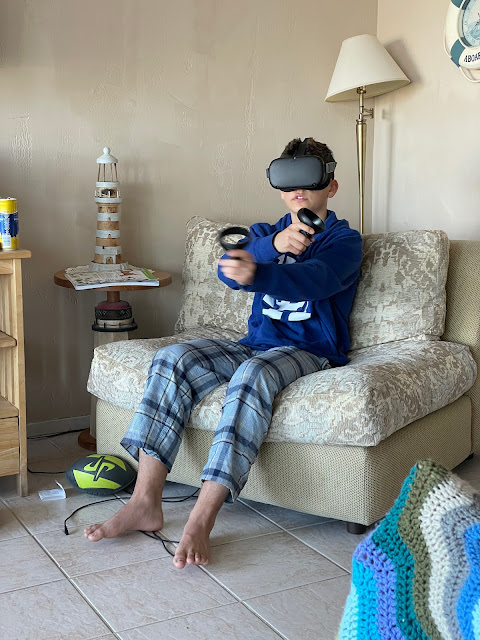 I had purchased little "learn to crochet" kits for each of the kids, cute little animals. However...even though there were lots of step-by-step videos, I don't think learning to crochet in the round is the way to go for a beginner. 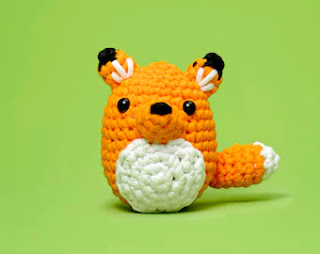 So my next plan is to use teach them to crochet a little 4" x 4" swatch to get the concept down, and then I think the kit instructions will make more sense. 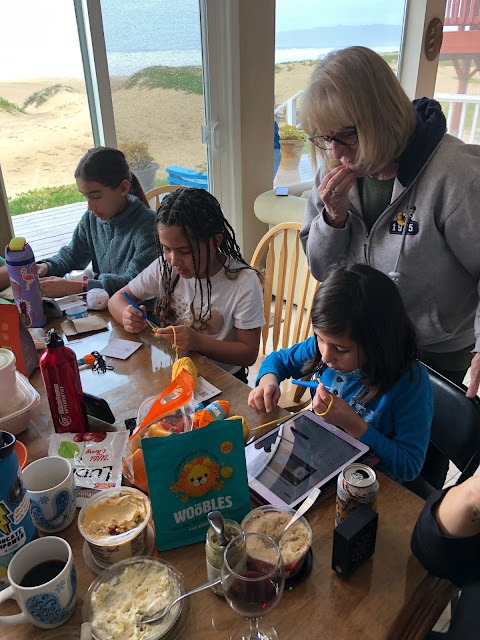 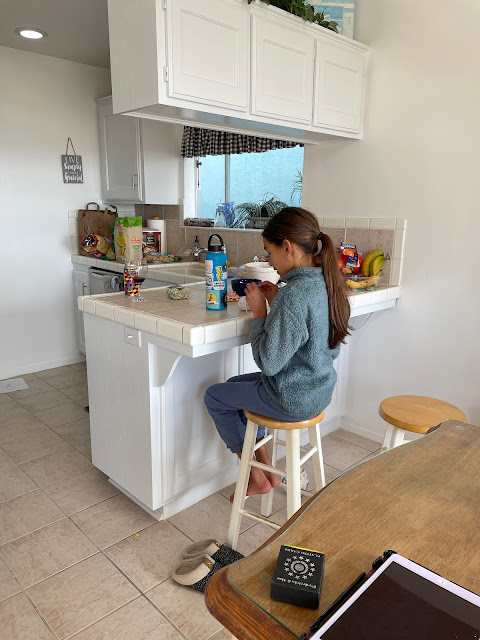 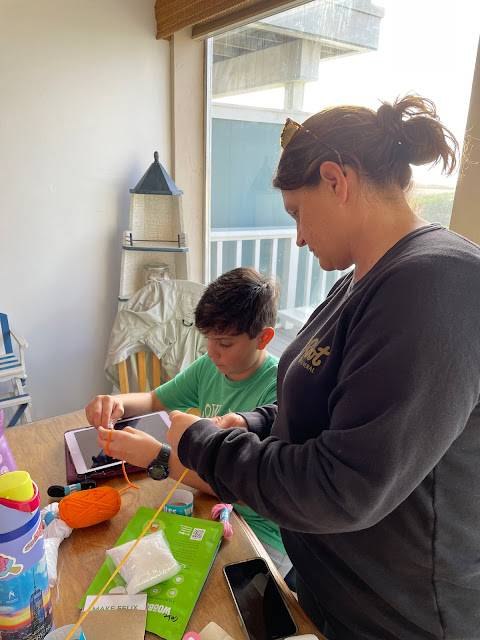 On Friday, there was no rain, so we were able to spend some time outdoors. 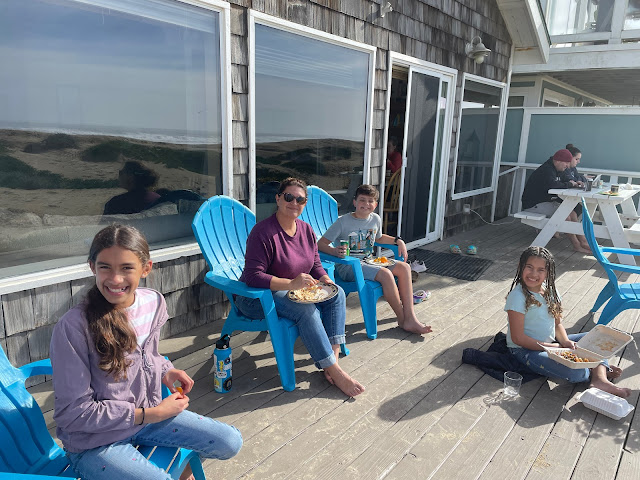 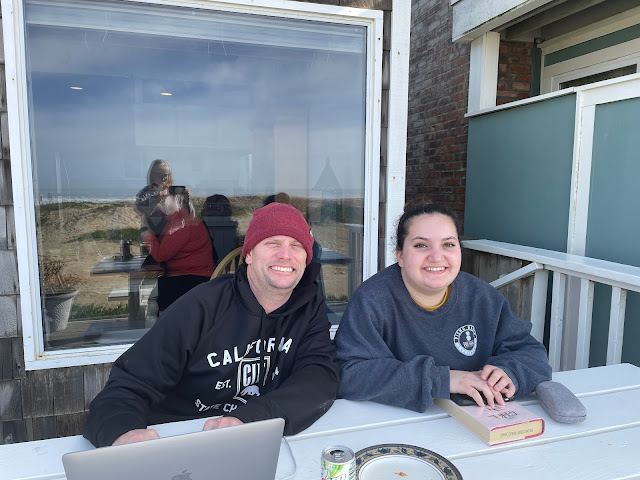 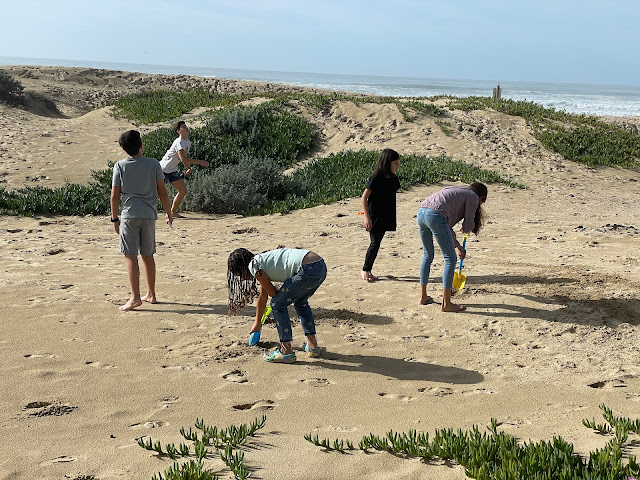 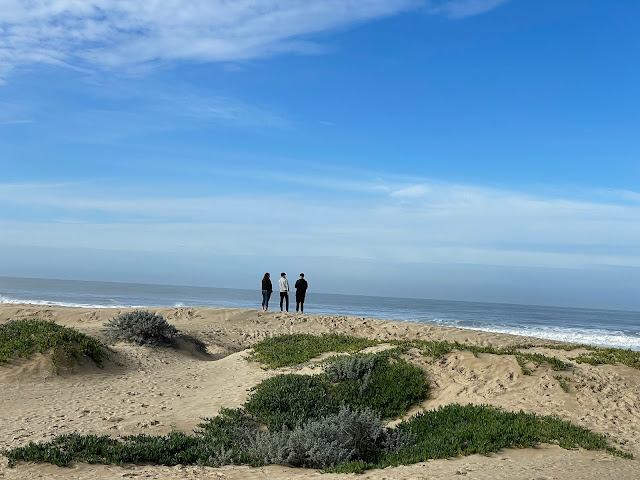 On Friday night, we were finally able to do our Saran Wrap game that we had saved from Christmas because Ella and Christa were home sick. It was a hit. We will definitely do it again this Christmas.
If you are not familiar with this game, there are lots of things wrapped up in layers and layers (and layers) of Saran Wrap. One person tries to unwrap as much as possible while the person next to them rolls a pair of dice. As soon as that person rolls doubles, things shift to the next person. Maybe you will unwrap lots of treasures, or maybe the person next to you rolls doubles on the first try and you have to pass the ball on immediately. Mark and I had fun finding things to wrap. There was a lot of penny candy, some money, weird stuff like a first aid kit, a set of mini screwdrivers, etc. 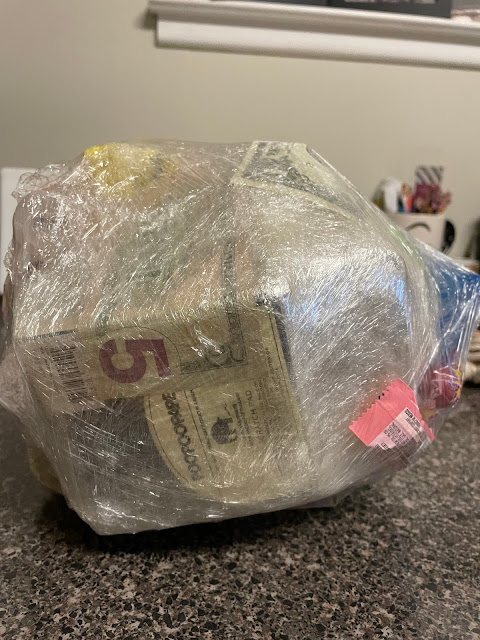 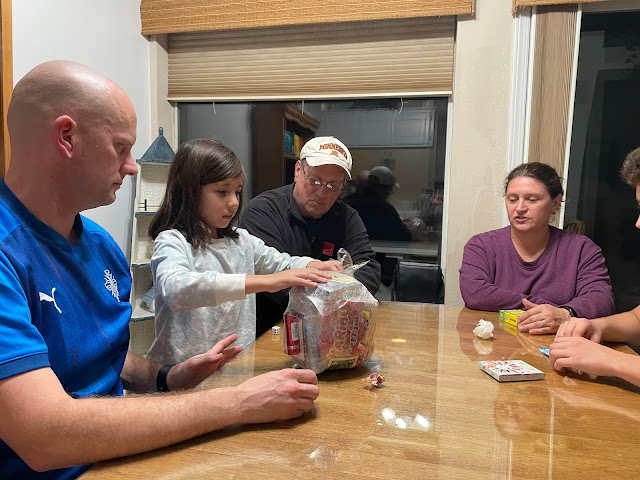 Spending time with family is my favorite way to start a new year. 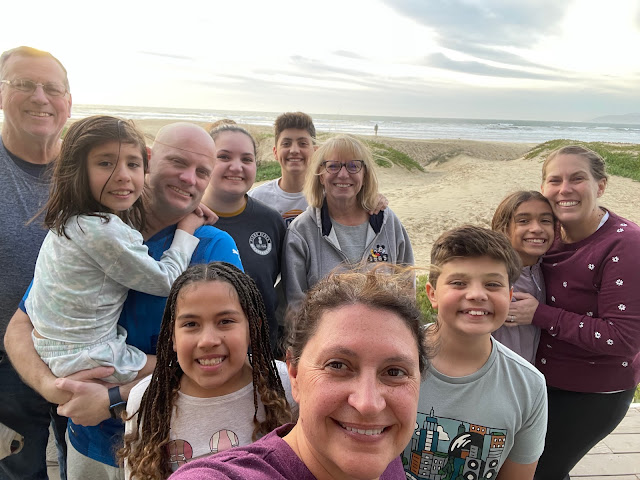 With everyone else headed home, Mark and I went to Pismo Beach (just a few miles up the road) for a few more days. Our hotel is up on a bluff, and there are steps that go down to the beach. We usually walk into town via the beach. But no way that was happening this year. The water was all the way up to the bottom of the steps. There was no beach! 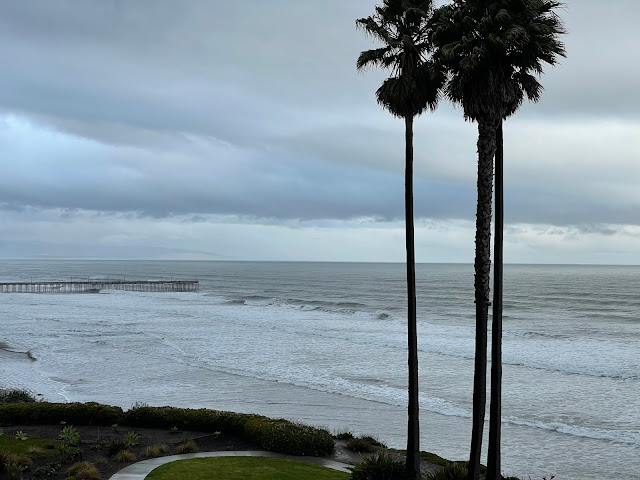 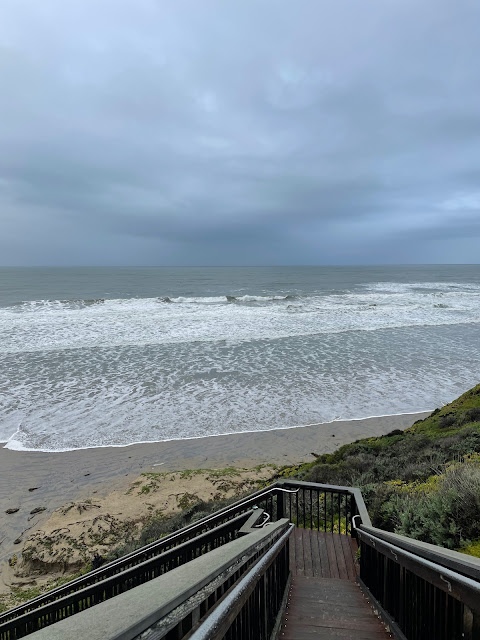 On Monday, it rained nearly nonstop. We ventured downtown for lunch, and our favorite pulled pork restaurant was open, but nearly everything else in town was closed. The wind was really blowing. There was no way we would have made it back to Fresno on Monday. There was so much flooding and many road closures. There has been much damage here in the state, along with loss of life. And more rain is on the way.
I love these plants. 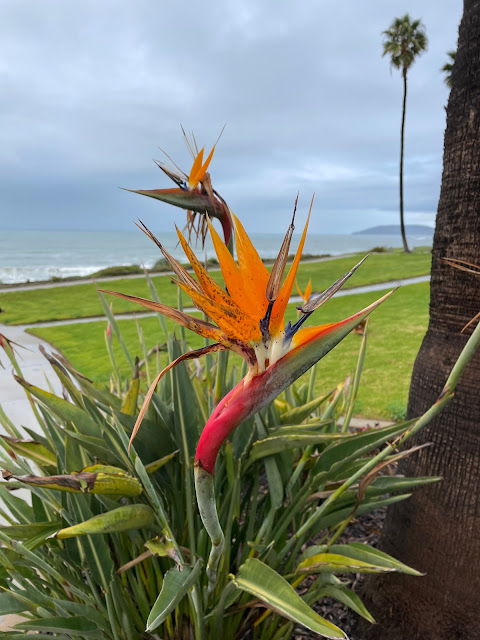 And someone really decorated their balcony. 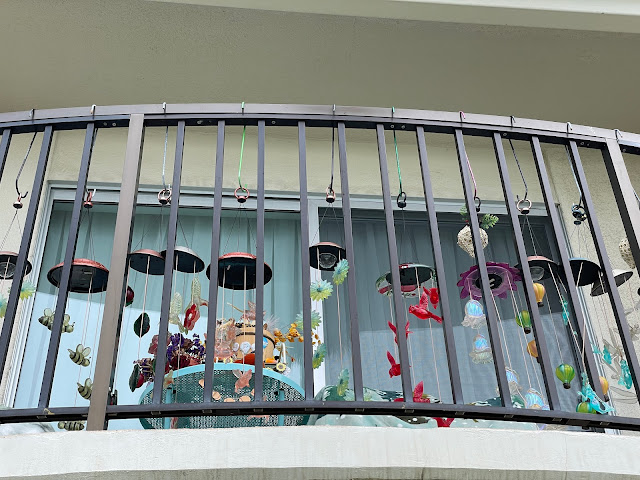 After all the rain, on Monday night we looked out our window at just the right time and were treated to this spectacular view. It was fleeting--the winds quickly blew clouds that covered up the sunset. But in those moments, it was absolutely stunning. 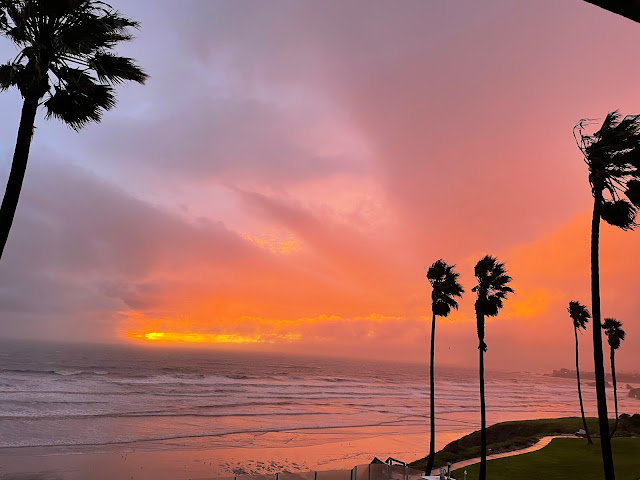 (Pretend I am whispering to you)
I feel blessed to be one of the ten people to get your calender.
Thanks!
Awesome beach pictures.

The rain has been nothing short of crazy, and we aren't even getting it bad here where we live. We feel so fortunate to still be doing okay given how hard and horrible it's been for so many other areas in the state. I'm glad you had such a great way to start the year with family, and hopefully these rains will taper off. I'm grateful for the rain, but a year's worth in only a few weeks is a bit too much.

Glad you got your beach trip in and that you're home safe. When I watch the weather channel in the AM, They show the state and always in the middle of things is Fresno and I think about you every time. Loved the sunset picture.

Glad you squeezed in your yearly beach trip even if you couldn't use the beach much. Hope you are staying safe and dry at your house. What I see on the news is just terrible. Nature never seems to even things out.

Nice to have another occasion to spend with family. Looks like everyone kept busy enough - gaming (not familiar with a VR), crochet, Saran Wrap play, and such - in spite of not being able to go to the beach. Such a gloriously beautiful sunset too! You definitely started 2023 the right way!