Quiltin' in the Rain

No--no actual quilting took place in the rain, but last weekend Mark and I were vendors at the Heart of the Valley Quilt Show in Modesto, about two hours north of us. It was raining heavily while driving there and while unpacking on Friday. Then the weather was nice until Sunday afternoon when the show was over and again there was a downpour, including a little hail and thunder, while we packed up to go home. Made us really glad that we have transitioned everything--all our booth stuff and all of our product--to either canvas bags or nicely labeled plastic bins. 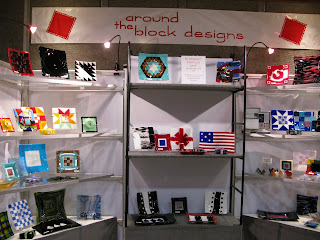 While we are thinking of cutting back on vending shows for a couple of reasons, those being (a) the expenses add up with trailer rental, lodging, food, and (b) it's a whole lot of work to set up, work the show for two days, and then pack up, we will probably continue to vend at this show because we really like not only the people who run it, but also the other vendors. Vending shows is interesting--you develop kind of a "community" where you become friends with other vendors and sometimes develop business relationships with them.

There were some great quilts on display, as there are at most quilt shows. An added bonus at this show: they had worked with the garden club in town and members were asked to pick a quilt as inspiration and make a flower arrangement. These were my favorites: 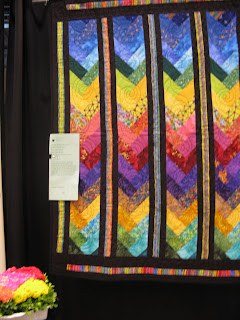 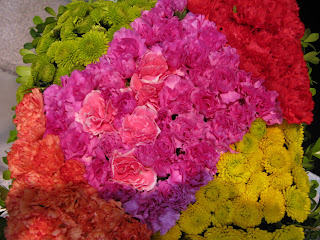 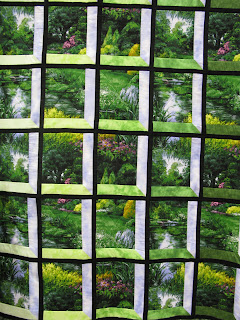 A "window" of flowers in an open frame. 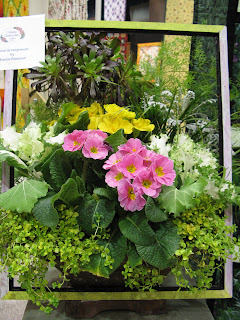 Our friend, Alex Anderson, was there. For those non-quilters, I always call her the Michael Jordan of quilting. Bonus--she is a big fan of Around the Block and promotes us whenever she has the chance. In fact, she was in our booth photographing some things for some fun possibilities in the future, but did I think to get a picture of her in our booth? Unbelievably, no.

So while she was schmoozing with sponsors or dealers or something, I was talking to her husband, John. Usually when Alex takes a picture with someone, she has this kind of signature picture "pose" where she tilts her head. So I thought I'd practice with John to see if I could be as cute as Alex. Hmmm... 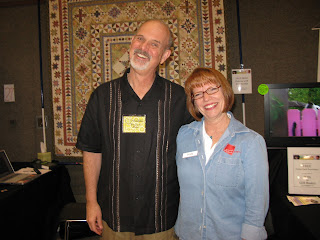 So here we are. Even with practice, it didn't matter. She's still way cuter... 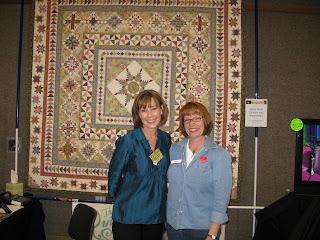 And then there's Harlan. We met him two years ago, actually the last time we vended at this same quilt show. He is an extremely talented jewelry designer, working mostly with silver. 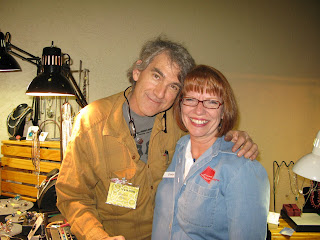 Turns out, he really likes our glass, too. So about a year ago he took a lot of Mark's fused dichroic pendants to see what he could do with them. And, ta-da, here is the fabulous result, ATBD glass surrounded in silver: 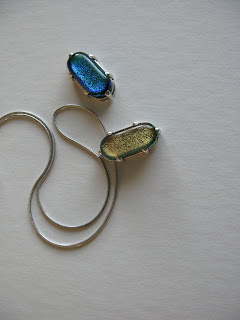 Given the state of the economy, and especially being just a month after Christmas, we were wondering whether we would even sell anything. Nearly everyone is cutting back--not only on money but also on "stuff." And face it, what we sell, while beautiful, is basically non-essential.
In fact, as one lady was walking out of the booth, she said, "I love your stuff. It's gorgeous!" *sigh* If only she could have left it at that. Just kept on walking and not said another word. But oh no, then she had to add, "But what the hell would I do with it?" Really? Did she really have to say that??
But much to our surprise, we had a great weekend and sales were brisk. This might have helped... 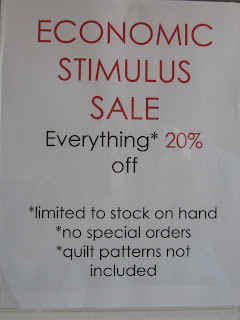