You know how you become eligible for an "upgrade" when you have reached a certain point in your cell phone contract? Well, first let me say that I really liked my Samsung slider phone. A lot. Did what I needed it to do, you know, like make and receive phone calls. But my phone was kinda dinged up and I could get a new one for free. "Free" meaning that I only had to pay activation and tax. So not really free. And speaking of activation: what part does AT&T actually play in activation when I take the sim card out of the old phone and put it in the new phone? They should be paying ME an activation fee. But I digress.

So I got the free (ahem...) phone, the exact same phone but this time in shiny red. Really awesome.

But then I started thinking, hmmm, did I make a mistake by not upgrading to an iPhone while I had the chance? It was now...or wait another two years.

So Saturday I went to AT&T to bite the bullet, spend the big bucks and upgrade to an iPhone. At Store #1, they told me that since I had upgraded online, they could start the paperwork but could not give me the actual phone. I had to go to Store #2, a "corporate" store, to get the phone. So I got in my car and drove to Store #2. Store #2 was out of iPhones (what??) but were getting a shipment that afternoon and would hold one for me.

And then Mark and I spent the rest of the weekend playing with this:

And while of course I don't actually believe horoscopes have anything to do with real life (because how could the same advice possibly apply to everyone born between November 22 and December 21??), it is kind of amusing that my horoscope on Saturday said "check out the pros and cons of an investment. What makes you feel you must spend or do something with your money?" Who cares? We have it, and boy is it cool!!
Posted by Live a Colorful Life at 8/31/2009 6 comments

My head's in the clouds

Little Spouse on the Prairie (which makes me smile every time I say it...) did a post on clouds and asked others to share their cloud pictures. Here is my contribution, taken at Lakeview Cottages in June, actually on our anniversary. The story behind this picture is that Mark and I, Aaron, Christa, Charlotte and Levi had been at the cottages for the weekend. I was staying up at Lakeview for the rest of the week, and they were all going back down to Fresno, but first we were going to stop at a restaurant on the other side of the lake and have an anniversary dinner (ours on June 8, Aaron and Christa's on June 10). Well, it was Monday and early in the season, and none of the restuarants were open. I sadly turned my car around, to go back to my cabin and eat alone, as they all continued on to have dinner together someplace closer to Fresno. When I got back to Lakeview and parked my car, I looked across the lake and this was my view. How majestic. And how quickly my mood improved. 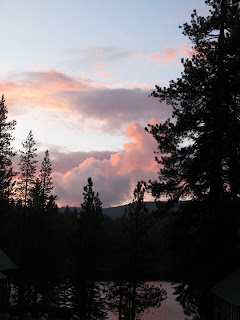 Notice of Immediate Termination of Tenancy

Over the years, we have opened up our spare bedroom to many guests. We either extended the invition ourselves or they asked and we said, "Sure. Come live with us..." Some college students have even stayed for up to a semester.

So yesterday, I was cleaning up/organizing the glass workshop so we could finally get back to work in there. And I happened to notice evidence that someone had been living there. Completely uninvited. No, not a person. Nope, I think it was something furry. With a tail. Ewwwww. I didn't hear anything scurrying when I walked in. So that's a good sign, right? I have tentatively opened up the door a couple more times. No sounds. As we never gave him permission to be there in the first place, I hope he has moved on, or I will take the necessary steps.

While I'm not usually a fan of blog posts without pictures, sometimes it's just the right thing to do. So I'm not going to gross you out with a picture to go along with this post. Because I'm just thoughtful that way.
Posted by Live a Colorful Life at 8/26/2009 6 comments

Letter to the Work Scheduling gods:

To whom it may concern:
I'm trying really hard to get caught up on medical transcription after being gone a week. I've been a good girl and have remained pretty much chained to my computer, typing practically nonstop about knee replacements, assorted other problems with assorted other joints, Parkinson's disease, Alzheimer's, migraine headaches. Consequently, I think I'm developing my own migraine.
Please, please...schedule in just a little time with my sewing machine and I'll be MUCH less crabby happier. 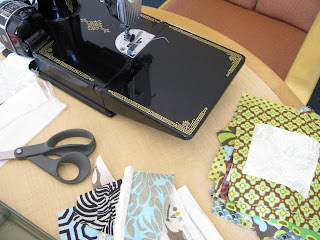 My family and friends will thank you for it.
Posted by Live a Colorful Life at 8/24/2009 3 comments

Email ThisBlogThis!Share to TwitterShare to FacebookShare to Pinterest
Labels: sewing

Anna Maria Horner wrote a post today about her favorite captures of Summer 2009, photographed or remembered, which got me to thinking.
I think my favorites would have to be these. And I know they look like they were taken in winter. Nope. Uh-uh. June 6, 2009. Turns out that June 2009 at Huntington Lake was particularly chilly. So what do you do when it's chilly? Surround yourself with people you love, bundle up, start a campfire, and make s'mores, of course. 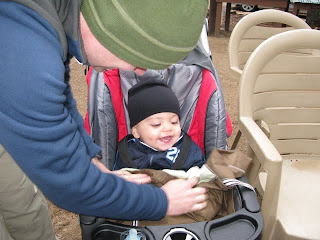 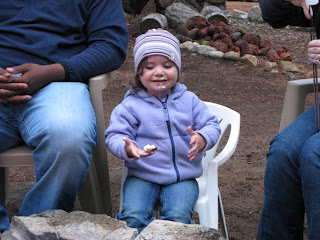 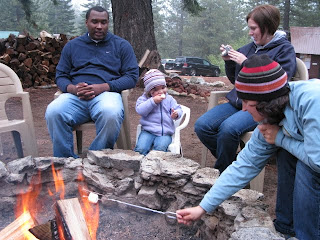 It's supposed to be 100 degrees today, so chilly weather and s'mores are looking pretty inviting right about now...
Posted by Live a Colorful Life at 8/10/2009 6 comments 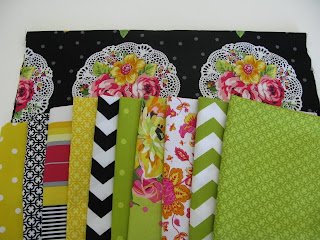 Just a common thread tying them all together...
Posted by Live a Colorful Life at 8/06/2009 7 comments

What does CR actually mean? 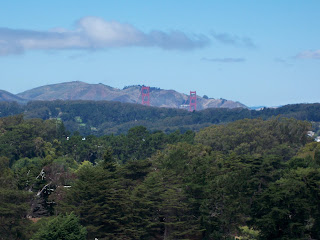 Maggie, Debbie and I went to U.C. San Francisco yesterday with George and Sue, as part of Sue's support/care team. She had an appointment for yet more blood draws, an appointment with her physician and transplant coordinator, and then an appointment with a social worker. The staff was very insistent that she bring her care team with her and stressed the importance of having them along at this appointment. There were five of us altogether, including George and Sue. We didn't think that seemed like a huge group, yet amazingly they had a hard time finding a place for all of us to meet. Do most people only have one person who comes along as the support "team"? 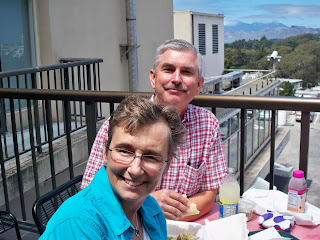 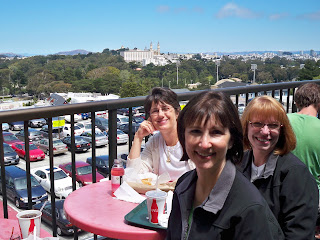 We ended up in the Chancellor's office, sitting around one end of this ginormous granite table used for meetings with all the regents. 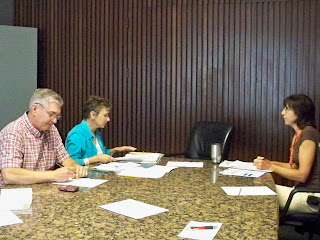 We very impressed with Sue's physician, Jeffrey Wolf, and also the transplant coordinator, Brigette. We were able to learn about her upcoming schedule, risks, benefits, answers to some really hard question, WHY she is undergoing the transplant when she is CR. 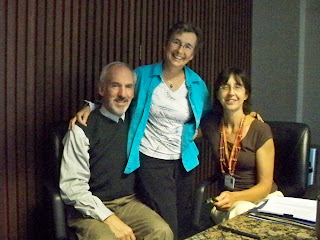 So the answer to the blog title: CR means complete remission. Sue is in complete remission, according to Dr. Wolf, and this was the first time Sue had heard that. Cause for celebration, for sure. But it brought up a whole lot more questions.

What does it really mean? She isn't cured. There are still lots of renegade cancer cells floating around, not congregating into a big enough group to be detected, but there nonetheless.
The stem cell transplant will be a long and arduous process. For Sue especially. For her family. For her close friends and caregivers. She will be in San Francisco for a couple of short stays, and then the biggie, three to four weeks. Then she will basically be on "house arrest" for one to two months after she gets home. She will need round-the-clock supervision. And round-the-clock prayers.
She is at the half-way point and there is light at the end of the treatment tunnel.
Posted by Live a Colorful Life at 8/06/2009 2 comments

We spent the weekend at Pismo, on the central coast of California. While it was a bit cooler in Fresno, it was still the perfect weather break for us--gray and a little misty in the morning, burning off to a sunny day. Sweatshirt and shorts weather. Ahh... 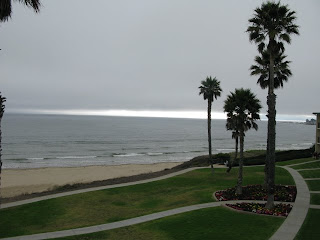 Like every other year, we park our car when we get to the hotel, and if we can't get to where we want to go by walking, well, we just don't go.

For Sunday lunch, we split a fabulous burrito. This is only 1/3 of it. Monstrous. 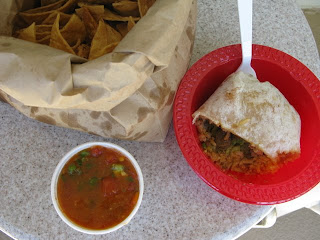 And this was our view as we sat on our deck eating our burrito and chips. Tough life...but somebody's gotta do it. 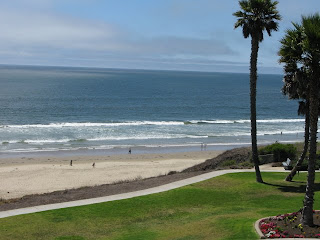 Yeah, I know. Pretty much the same view, sunnier this time. But really, how could anyone get tired of this view?
And remember how I planned on sewing at Lakeview but the weather was too nice to stay inside? Well, we just set up our tables facing the ocean and opened up the sliding glass door. 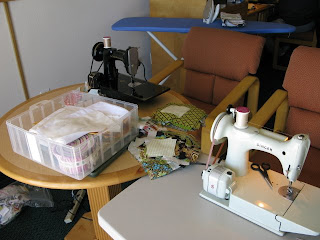 I know you are thinking to yourself: "Two sewing machines?" Mark cut, he pressed fabric and he sewed. 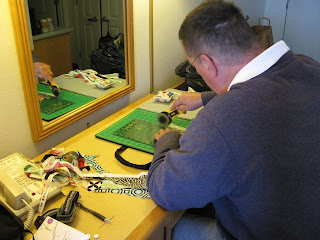 We both worked on Matt and Samantha's wedding quilt. Here are parts of it...can't give away too many details, in case they happen to read this post, so there is another project on the table just to keep them guessing. 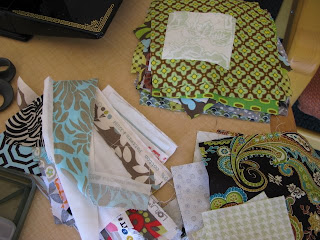 In the category of "what the heck is this guy doing?" We see him nearly every time we are here. He "crab walks" the beach, back and forth, only on Sundays. Why? I wish I could tell ya. 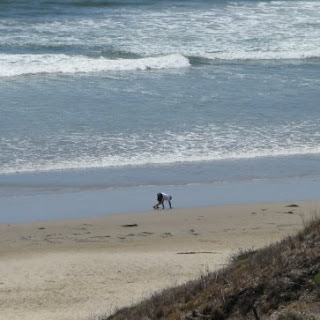 As a bonus, on Monday I got to meet Cynthia Mann of fabricworm, an etsy shop where I have spent many a dollar. So fun to meet her in person, and what better way (for me, at least...) to end the weekend than with a bag of gorgeous new fabric? 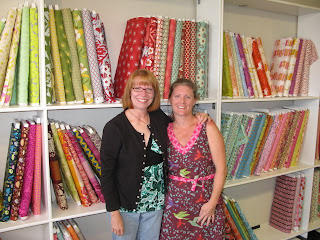 ...time is running out to win the giveaway at Down and Out Chic. It ends Tuesday at 6 p.m EDT. So hurry on over and make a comment for your chance to win one of these fabulous prizes: 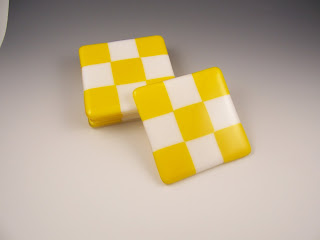 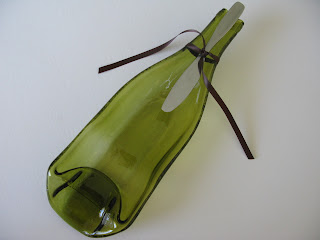 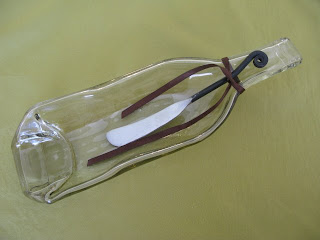 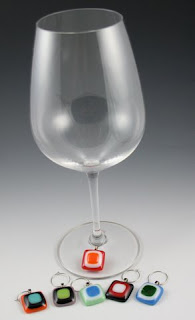 All you have to do is comment on Christina's blog. That's it. Easy-peasy. But hurry. Because Tuesday, August 4, is the last day.
Posted by Live a Colorful Life at 8/03/2009 0 comments

Email ThisBlogThis!Share to TwitterShare to FacebookShare to Pinterest
Labels: giveaway, one in every color
Newer Posts Older Posts Home
Subscribe to: Posts (Atom)