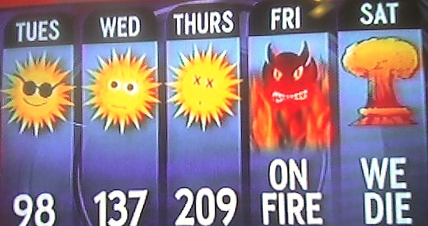 Welcome to Fresno in July and August.

Oh wait. It's only June. My grandfather used to always say Fresno was the hottest during the last two weeks of July and first two weeks of August. Apparently he would have to readjust that theory. At least this year, as we have had a run of days reaching 108 to 111.

Happy birthday to my brother today. He and his wife, Gracie, drove through town last week from Washington DC. They were able to visit with our dad, have lunch with us, drive to the Bay Area to spend time with their daughter, and head up to Yellowstone. We were so happy to spend even a little bit of time with them. 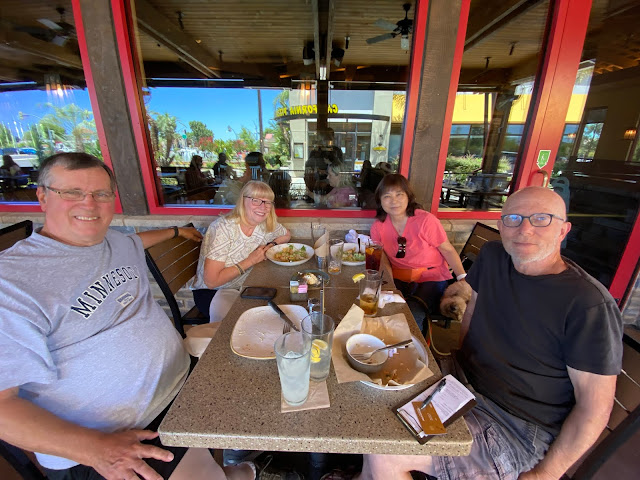 We didn't have onion rings for lunch. However, if we would have had them, they would have been totally healthy. Because... 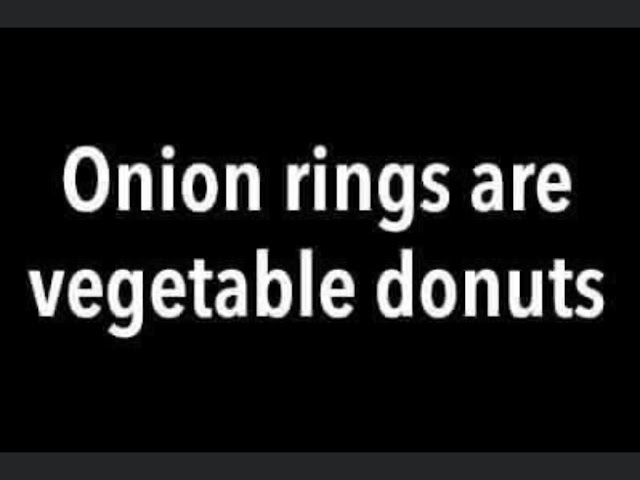 Aaron and Christa just celebrated their 21st wedding anniversary. HOW do we have children celebrating 21 years of marriage? They have gone to school together since junior high, and were obviously destined for one another, as evidenced by this picture in their 8th grade yearbook. And then they both were valedictorians of their high school senior class. 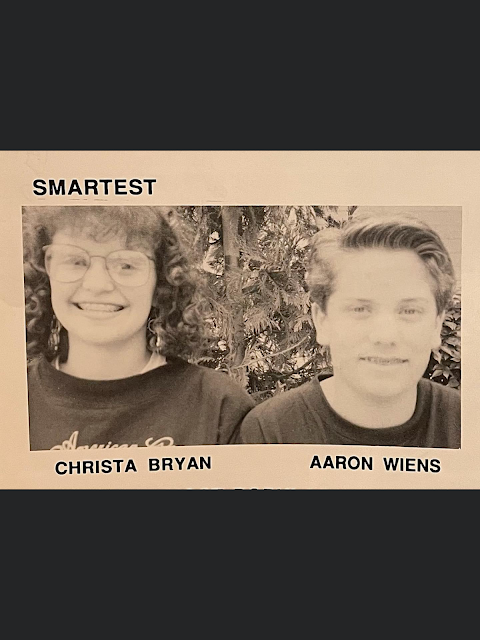 Here's some random proof. Aaron loves flags. And he can identify nearly every flag from every country, no matter how obscure. My favorite morning newsletter (the Morning Brew) posted this on Flag Day. So even though they were on vacation, I couldn't resist sending it to Aaron to look at when they were back at their hotel. 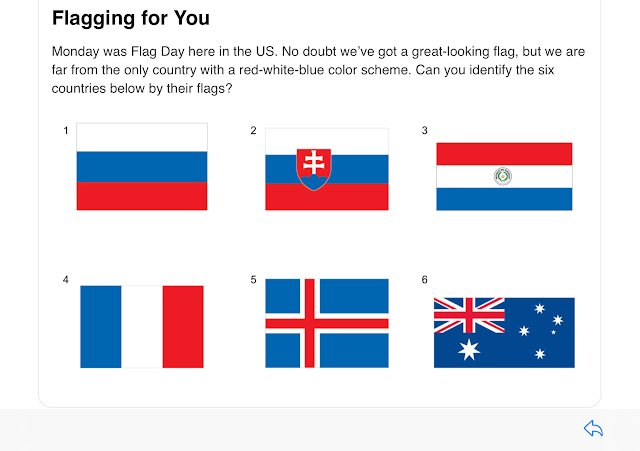 He got back to me the next morning. As I was pretty sure he would...
His guesses: "1--Russia, 2--either Serbia or Slovakia (my guess is Slovakia--{correct}, 3--some Latin American country--I wanna say Paraguay {again, correct}, 4--France, 5--Iceland, 6--Australia."
100 percent correct. You know what you call a person like that?  A vexillologist. And now you know.
Our niece, Rose, is an amazing artist. She recently won a contest to have her artwork represent the 2021 Greater Yellowstone Crane Festival. So proud of that girl. 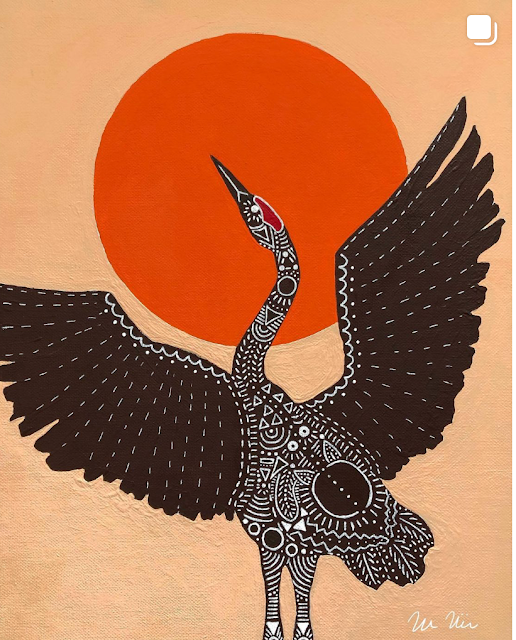 I have not been doing much of anything in this heat except some sewing and reading, both of which I'm enjoying immensely. The best thing I have done since last year was to download the Libby app, which is linked to my local public library. I read the books on the Kindle app on my iPad. And because it's the public library, I have 21 days to read the book. It's made me more focused in order to finish the book before I have to turn it back in. My most recent books have been: Beach House for Rent by Mary Alice Monroe, book 4 in a series that takes place on the Isle of Palms off the coast of Charleston, The Plot by Jean Hanff Korelitz, and the Last Thing He Told me by Laura Dave. I also highly recommend The Firekeeper's Daughter by Angeline Boulley and Meet You in the Middle by Devon Daniels. I'm currently listening to the Armand Gamache series by Louise Penny--I may be slightly obsessed with that series. If you read, or have read, any of those, let me know what you think. I'm also open for more recommendations. :)

We went to a graduation party on Saturday night, after a day that had been 109 degrees! Honestly, I was kind of dreading it, since it was still 106 at 7 p.m. But the yard was in the shade and there were some clever misters around to keep the air cooler. It was for both sons of our good friends--Daniel who gradated from high school and Michael who graduated from USC. They are both excellent musicians so we enjoyed lots of amazing music and ended up staying until 10 p.m. Daniel opened with a set on the drums, and then Michael and his combo performed songs from his new album. Yes--it was an album release as well! Michael is on the left playing the trombone. I'm not kidding when I say each member of this jazz group was AMAZING! I'm putting Michael's link here--take some time and watch some videos. Start with Good4U. #timewellspent 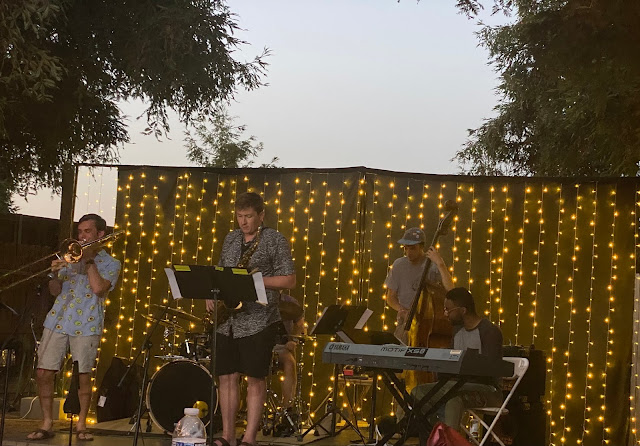 Other than that, I mostly have a collection of memes. 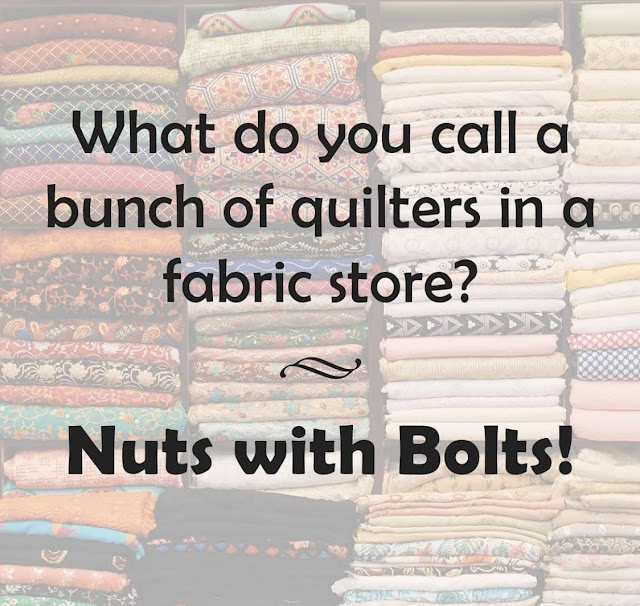 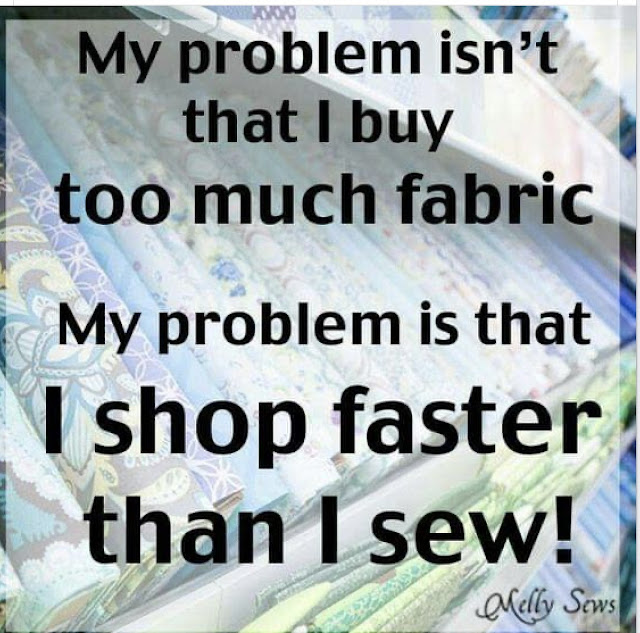 Lunch with two fabulous fathers on Father's Day, along with the rest of my fabulous family. 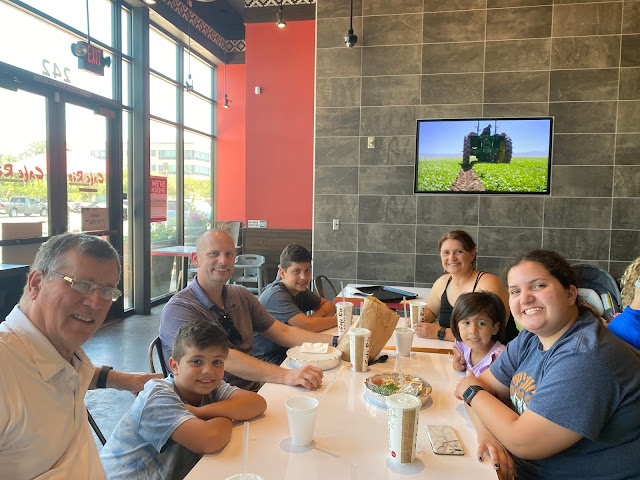 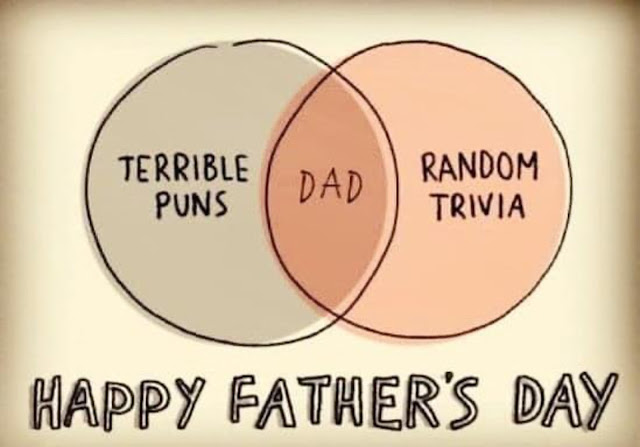 When you don't have a pool, you get out the slip-n-slide. 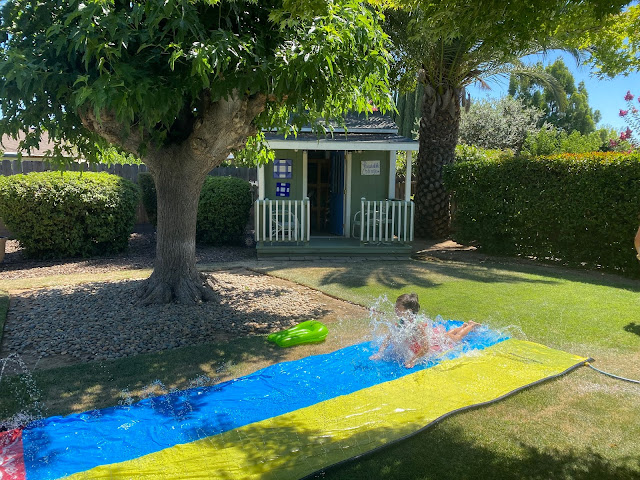 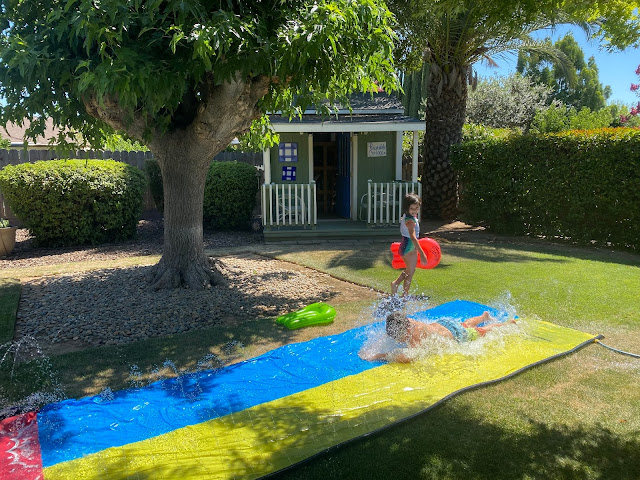 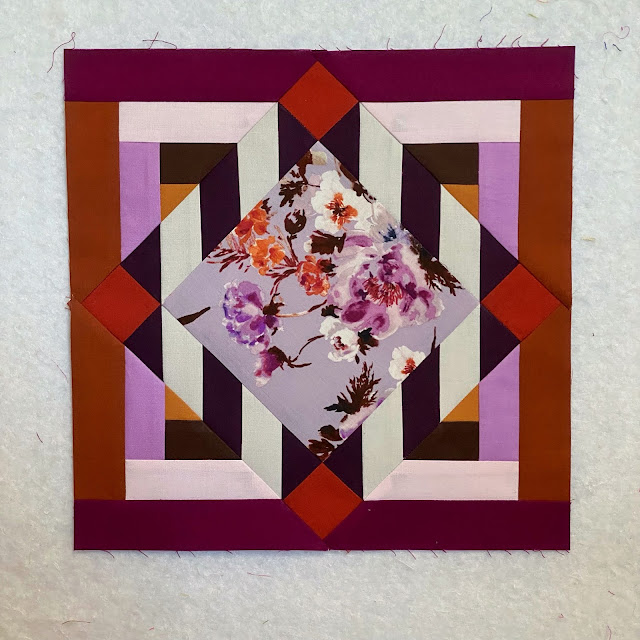 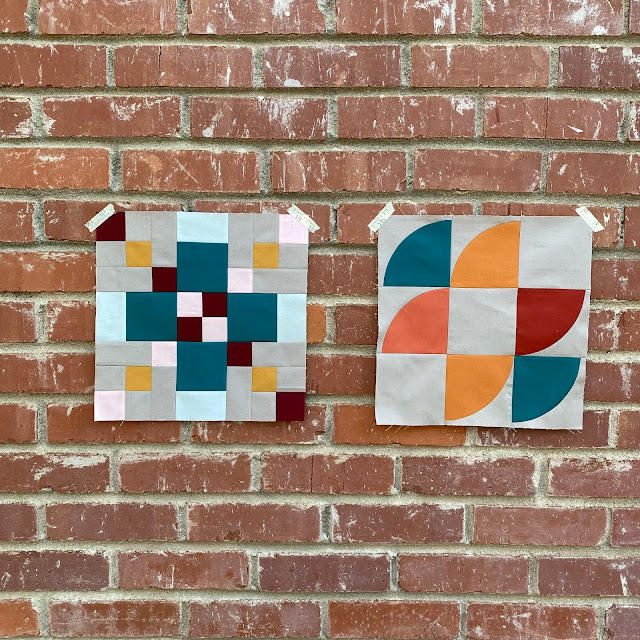 More memes:
Mark sent this one to me after we came back from Capitola. Although this would never happen, since he doesn't make annoying sounds. And he does most of the driving. :) 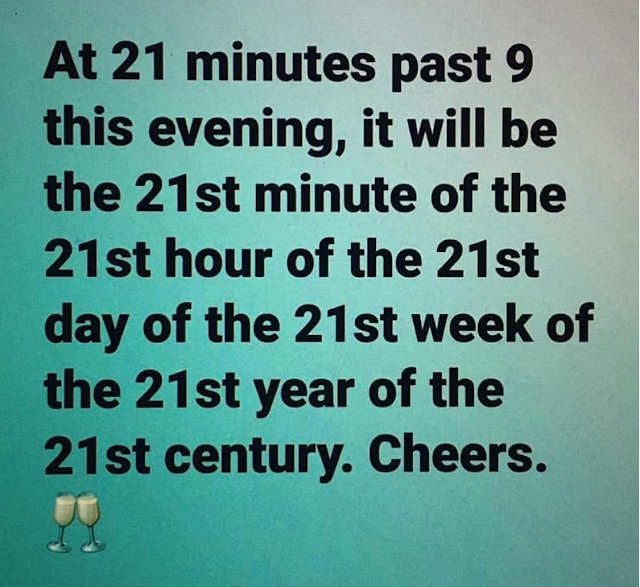 I was obsessed with the Monkees in 8th grade. 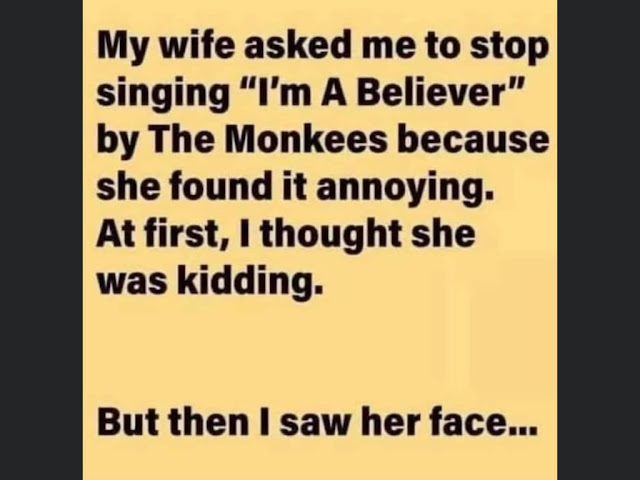 I love to have individual "dates" with the grandkids, and Aaron and Christa when they have time. For Mother's Day I received the coolest gift--cards from a place they each wanted to go with me. 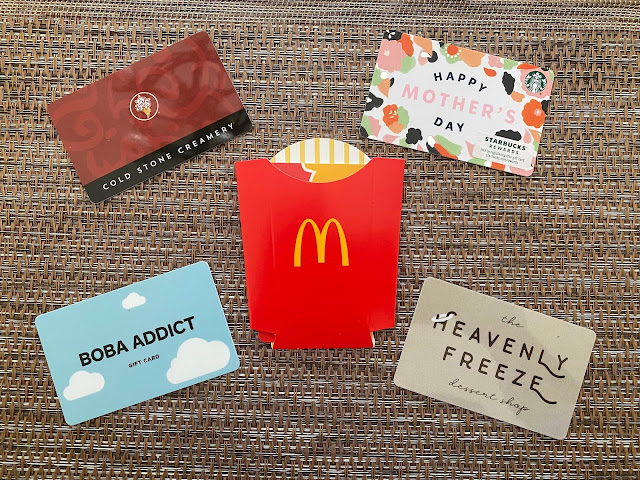 I cashed in on McDonald's yesterday, with the sweetest 7-year-old who loves her McDonald's happy meals. She was particularly chatty and we had the best time together. 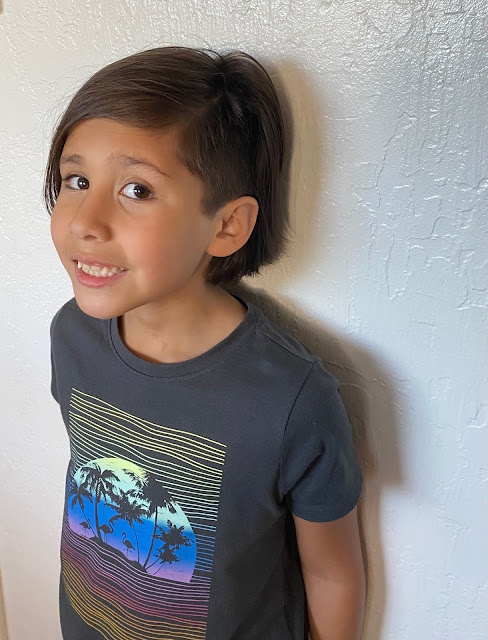 I guess I had more to say today than I thought. COVID-related memes seem to have slowed down, but I'll close with this truth. 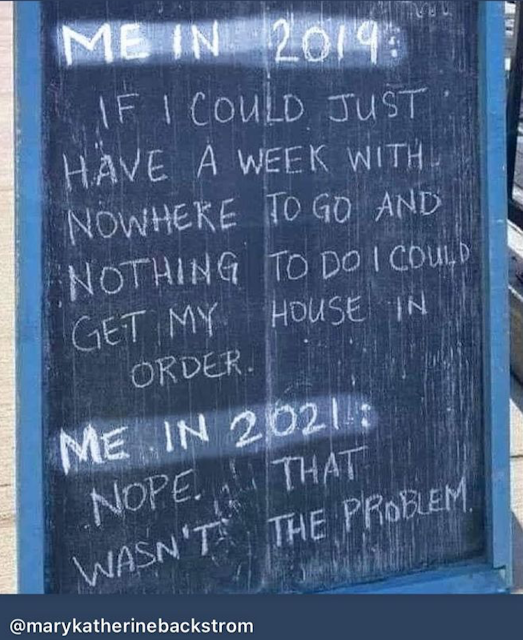