It's Wednesday and I'm glad to finally have something to show, especially since my good friend, Elizabeth, is hosting, and all of what I have to show was completed at her house last weekend!

The most wonderful thing about blogging is the friends I have made. Elizabeth and I finally met last January at Road to California.We spent about two hours walking around, getting to know more about each other. Last Thursday I took Amtrak down to see her. First of all, I highly recommend Amtrak, although I wish the whole trip was on the train rather than just two hours on the train and four hours on an Amtrak bus. But never mind.

It was fabulous weekend. Around Halloween last year, she posted pictures of her quilting group which has gotten together nearly monthly for 16 years! The Halloween party looked like so much fun that I repeatedly begged politely asked if I could attend this year. It worked out for me to come to the Christmas party this year.

Thursday night after supper, Elizabeth and her husband, Dave, took me to a spectacular place pretty close to where they live. Oh the lights... 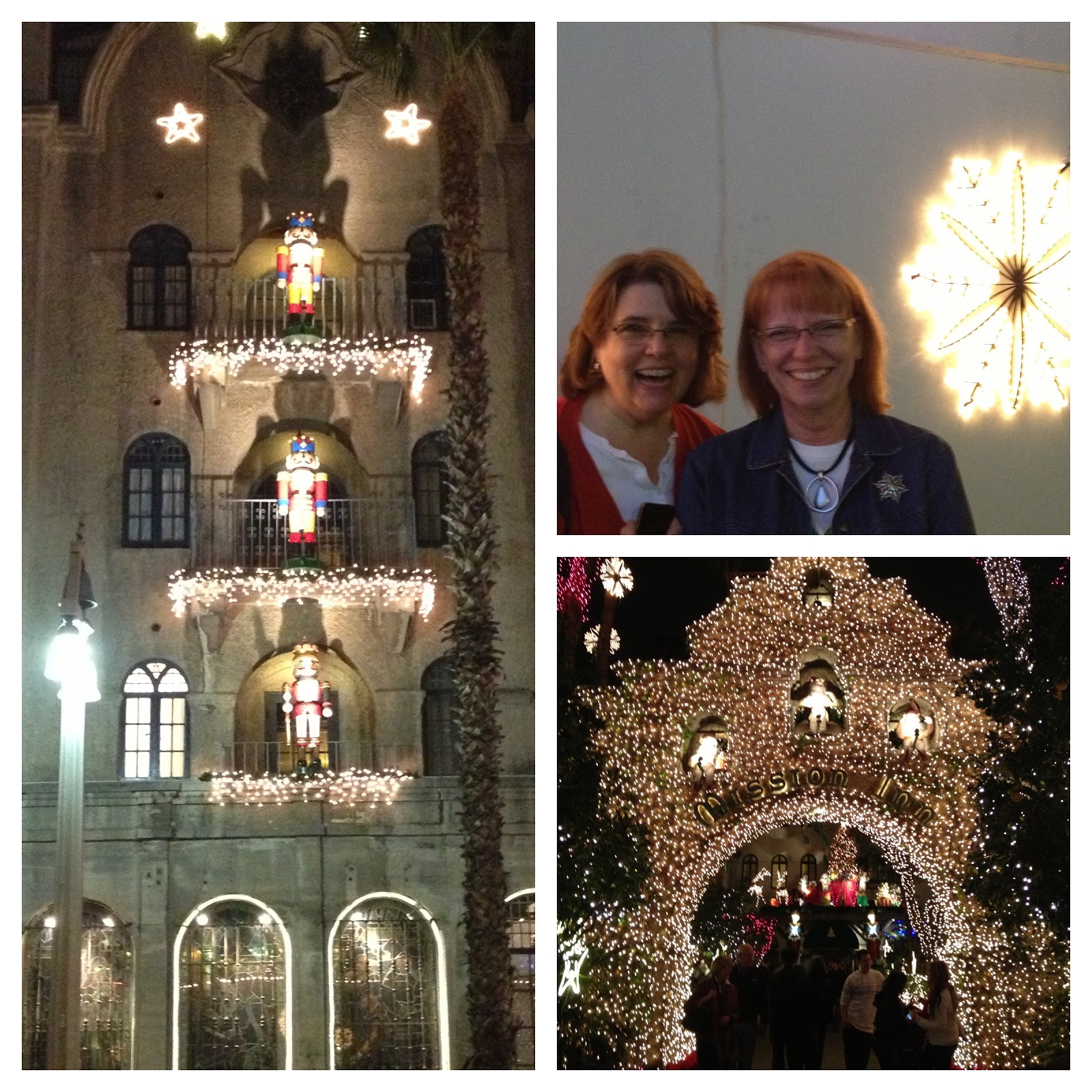 And the cupcake shop, 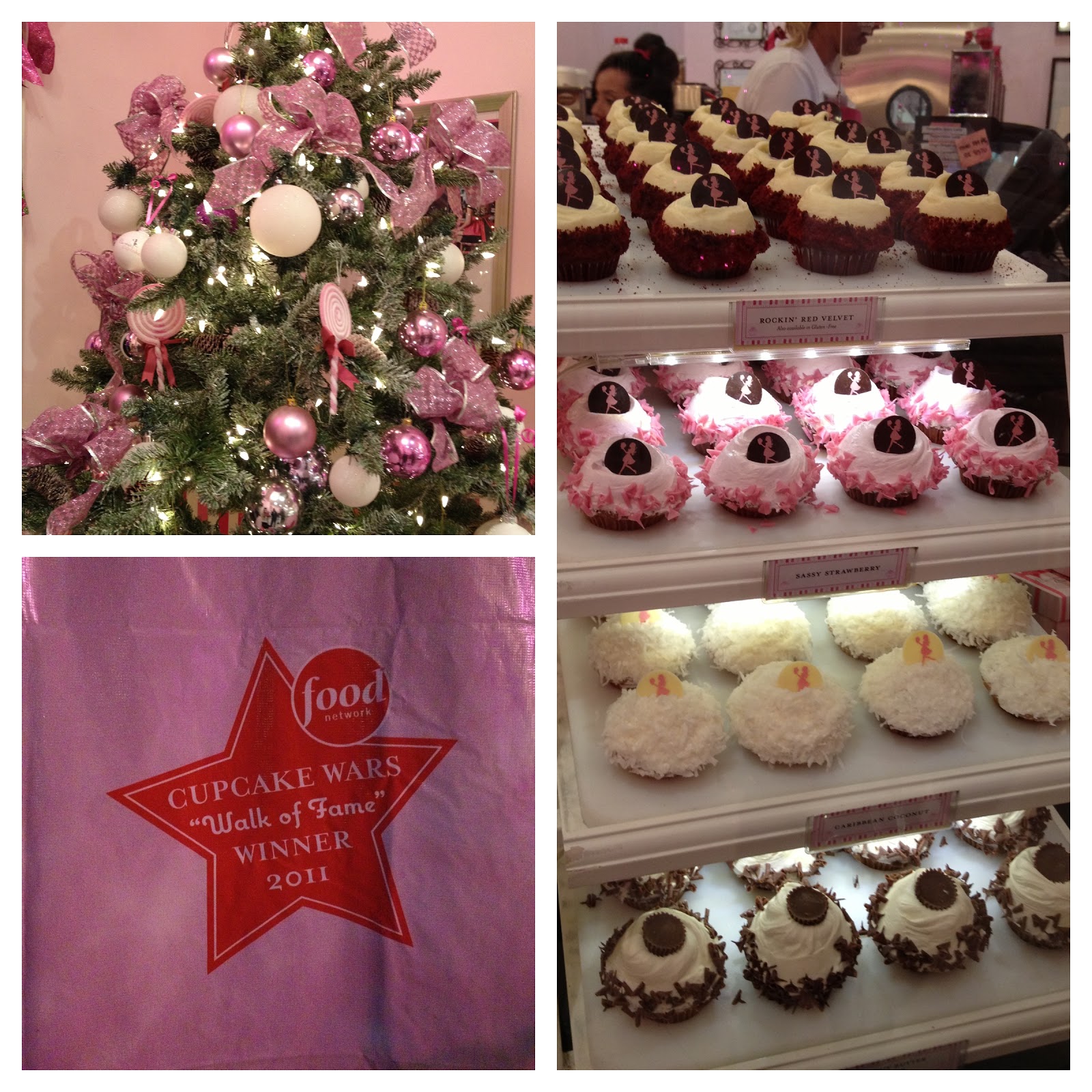 Okay, these moving figures/animals were slightly creepy, since they just moved around without singing, but the lights helped a lot. 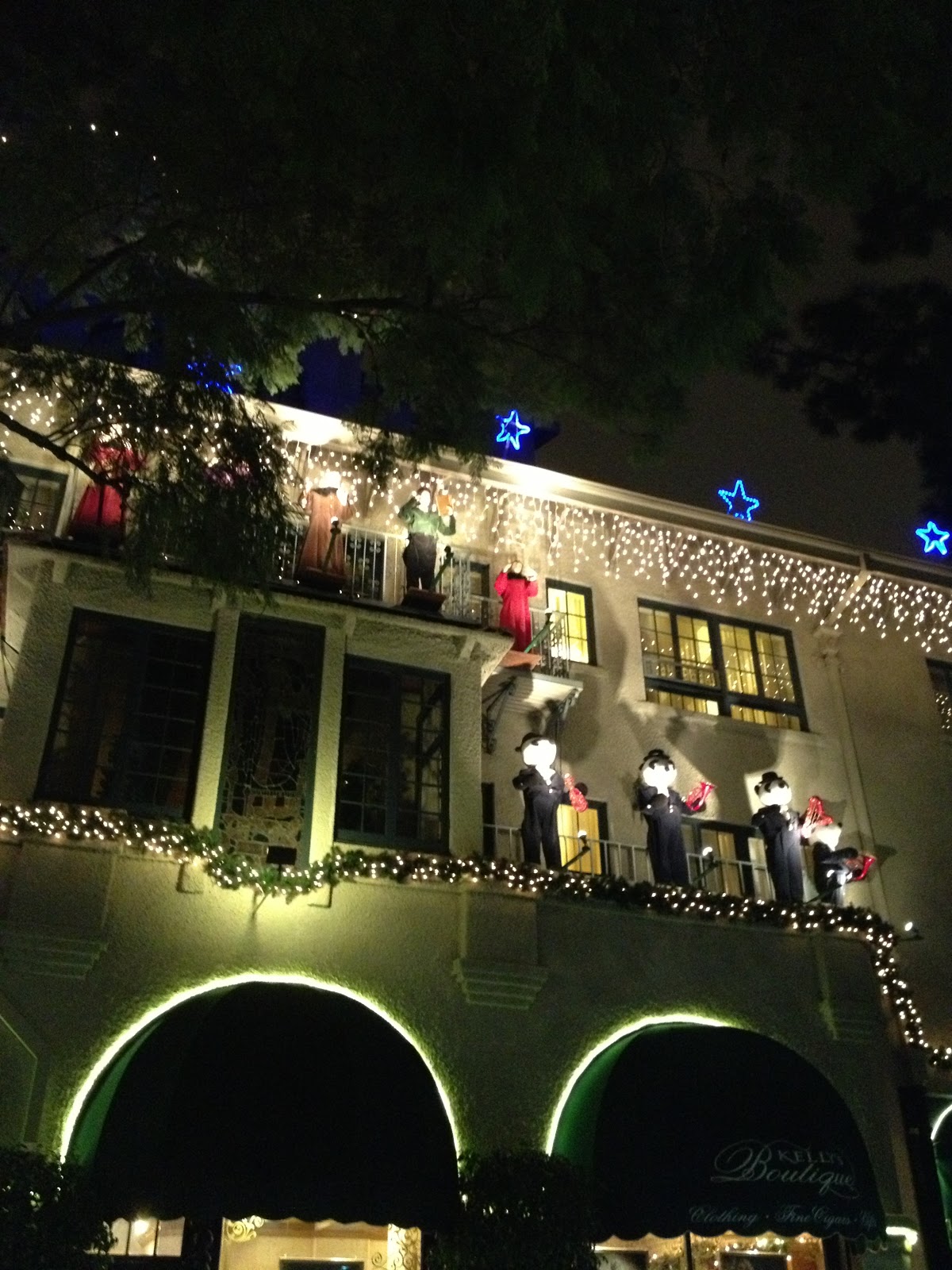 The next morning, we went to IKEA, where I purchased some fabric.  Good thing we are each honest quilters... 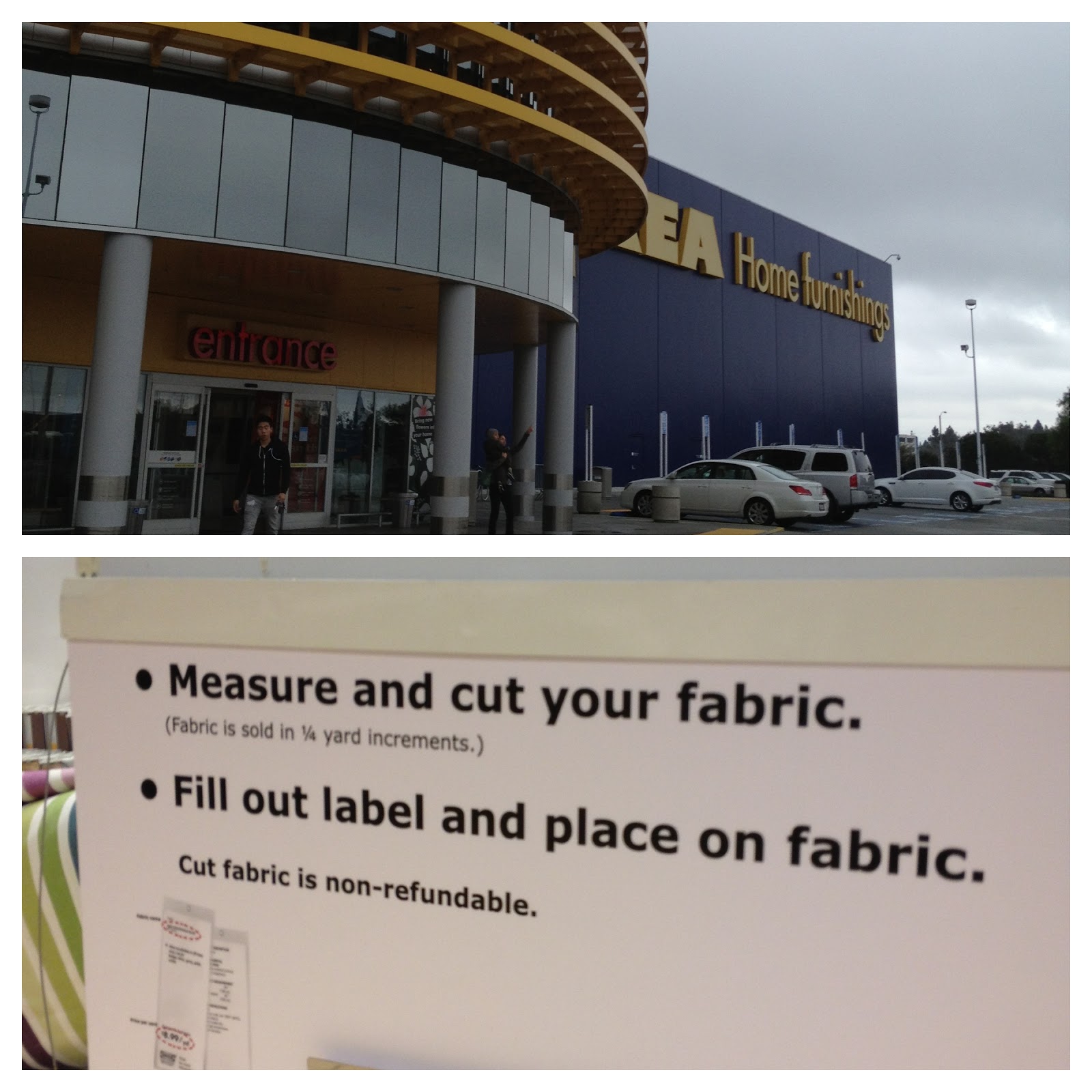 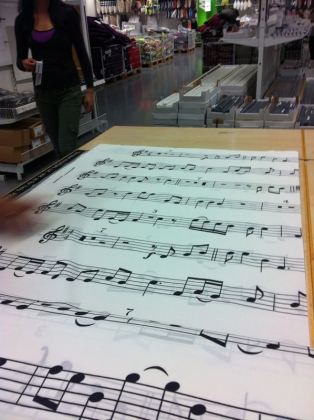 When we went home, we got the house ready and started warming up the most delicious chili. 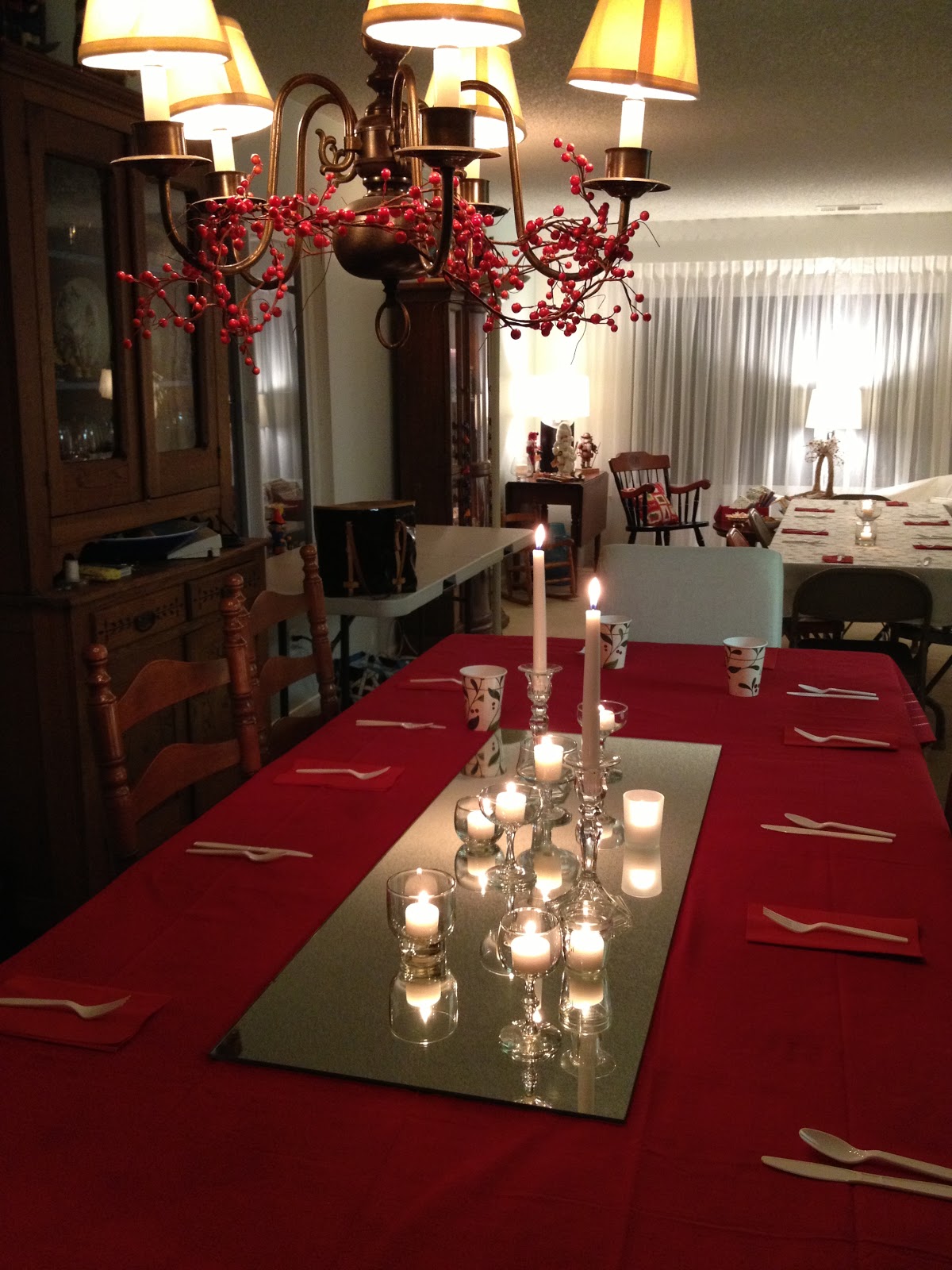 Her quilting friends were welcomed by this very festive door. 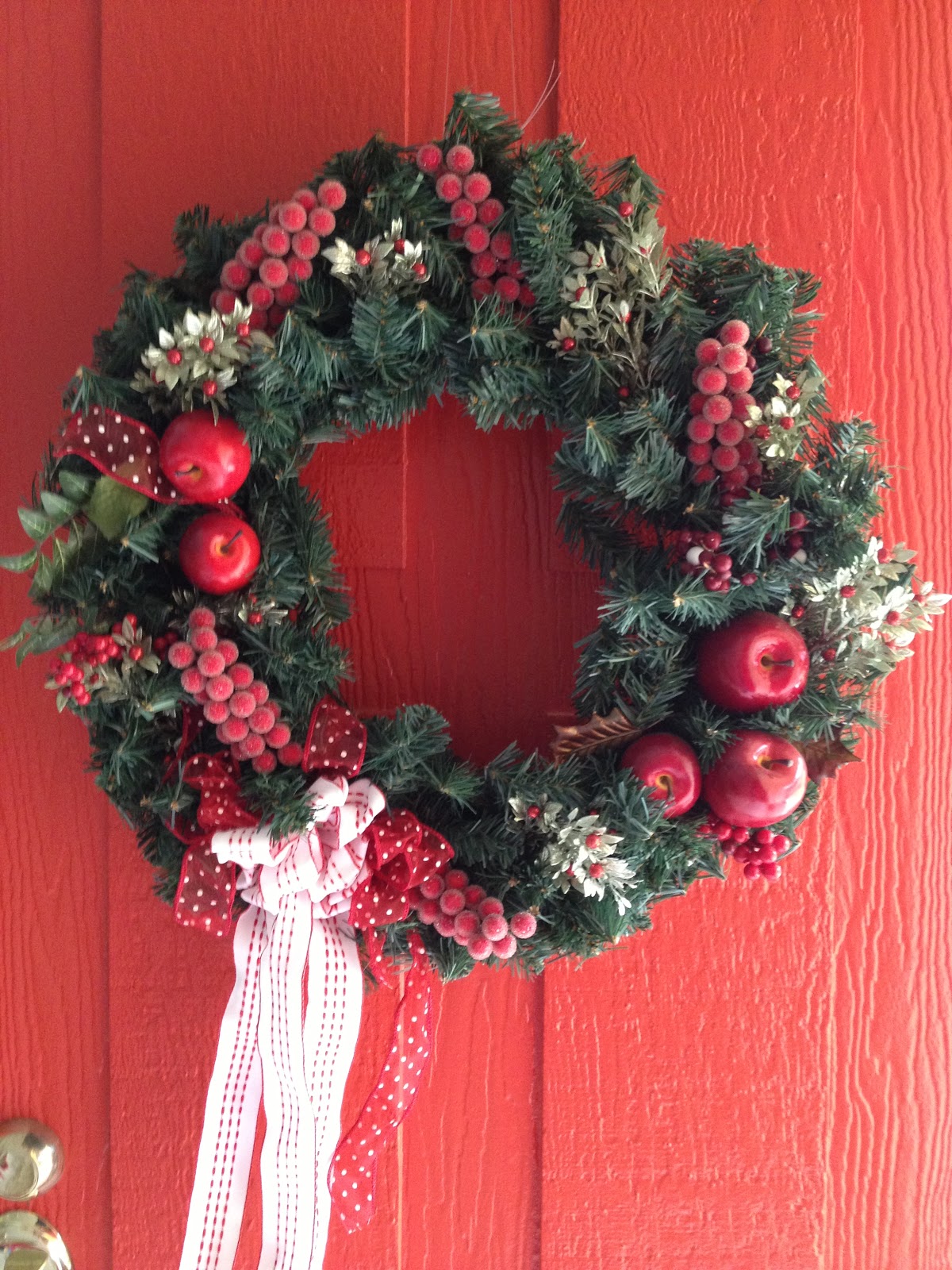 After supper, the tables were cleared off and we started sewing. Elizabeth has the nicest friends. I felt very comfortable with all of them. 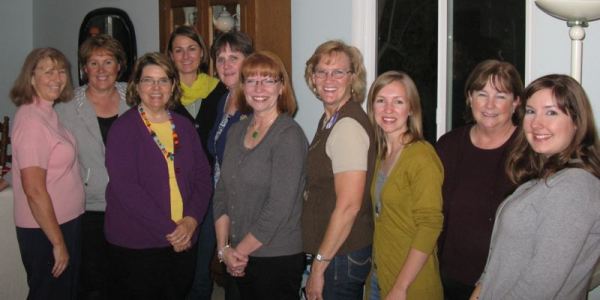 There were nice little gifts for everyone, pincushions made from an antique quilt, 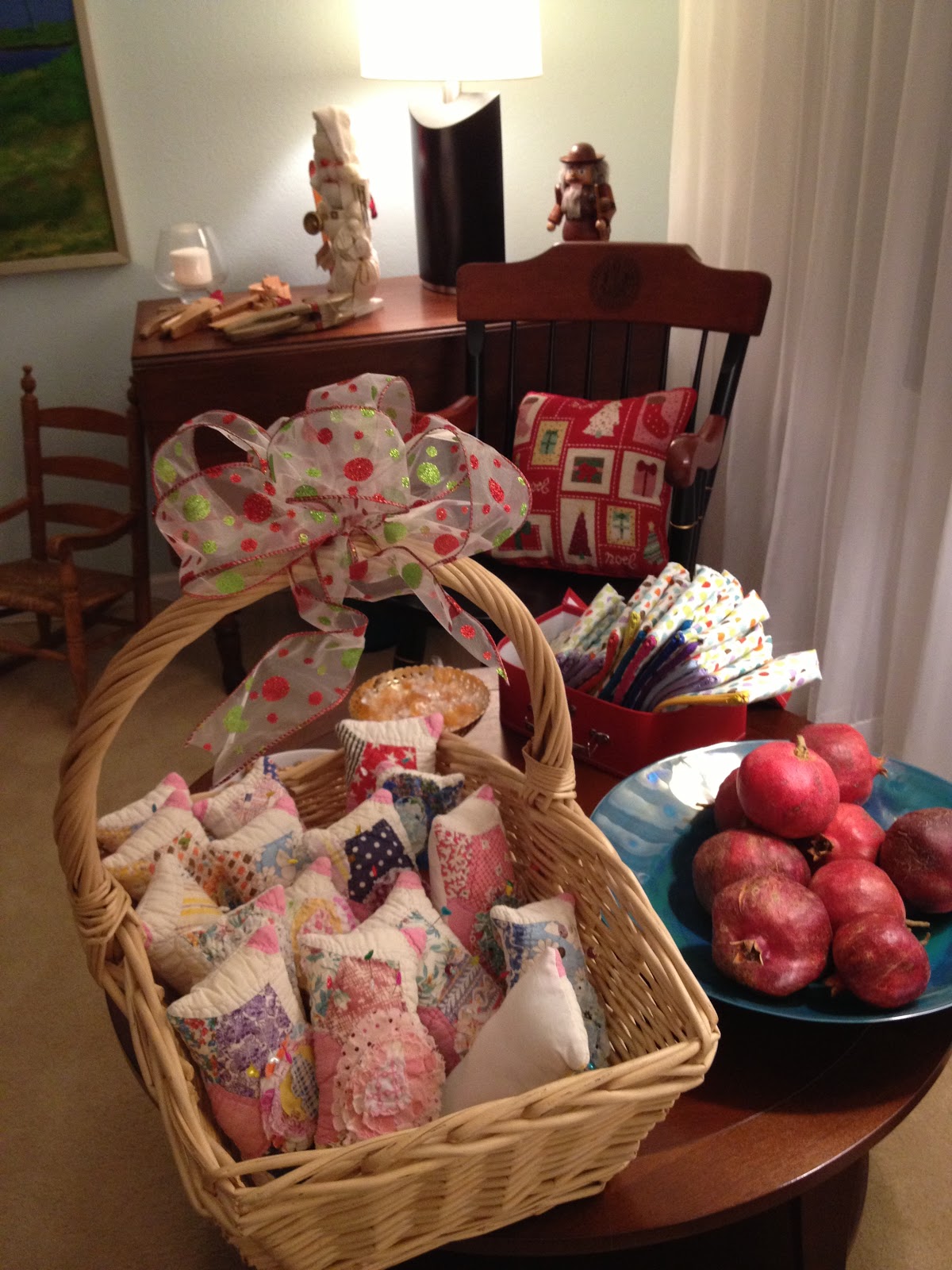 and the cutest zippered pouches, made by Elizabeth and her friend, Leisa. 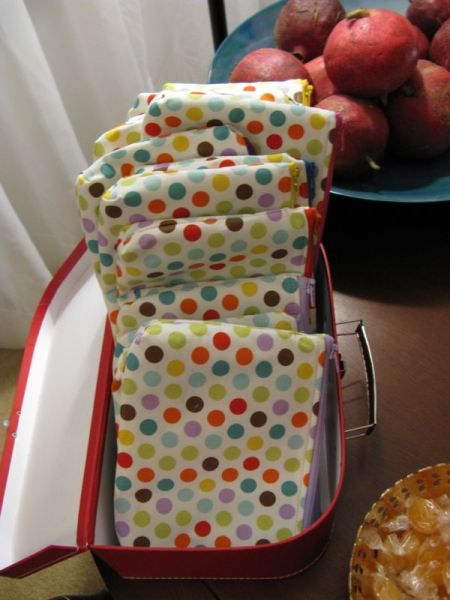 The next day, Elizabeth and I spent the whole day sewing. I had brought along my Farmer's Wife blocks. I'm only putting 81 of them on the front of the quilt. The other 30 are going on the back. (Or maybe only 29--I counted and counted over and over, and can only find 29--I know I did all of them so some stray block must have attached itself to another quilt...). 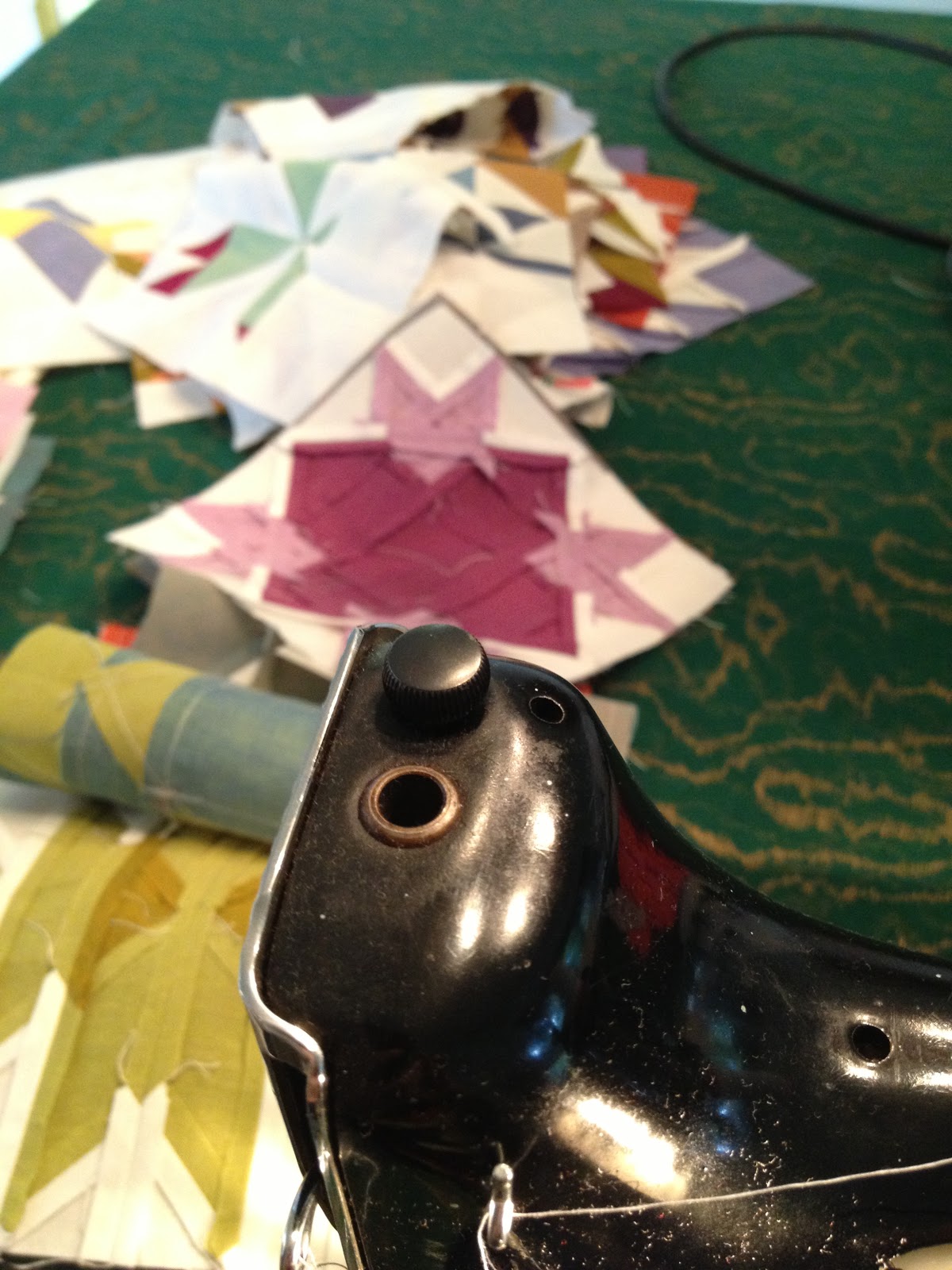 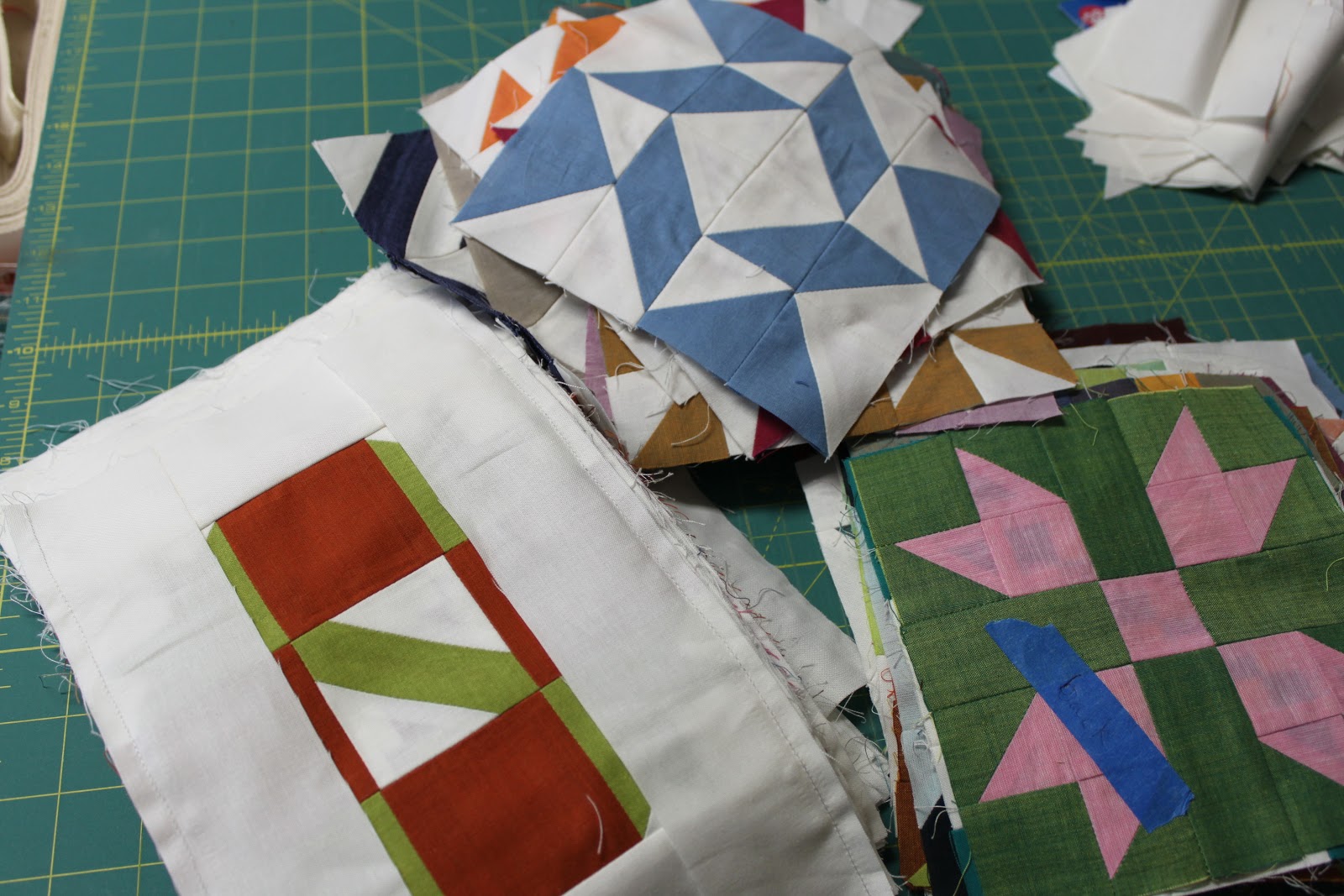 The stack on the left looks kind of weird because there are sashing strips on two sides... 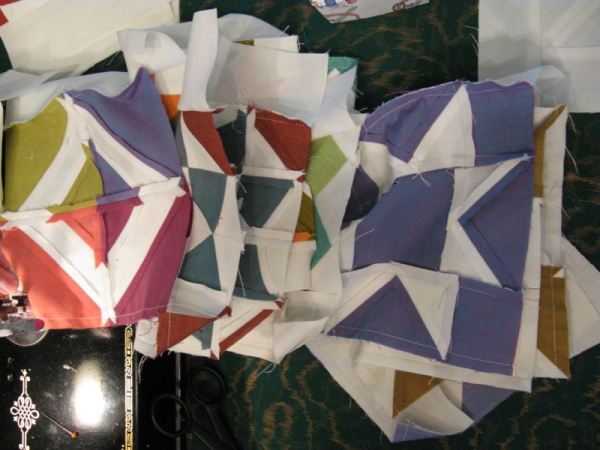 (I probably should mention that a couple of these pictures were "borrowed" from Elizabeth's blog...)

Anyway, 41 will have straight sashing, 40 will be set on point, alternating with each other in nine rows of nine blocks. These are the only two that are completed. 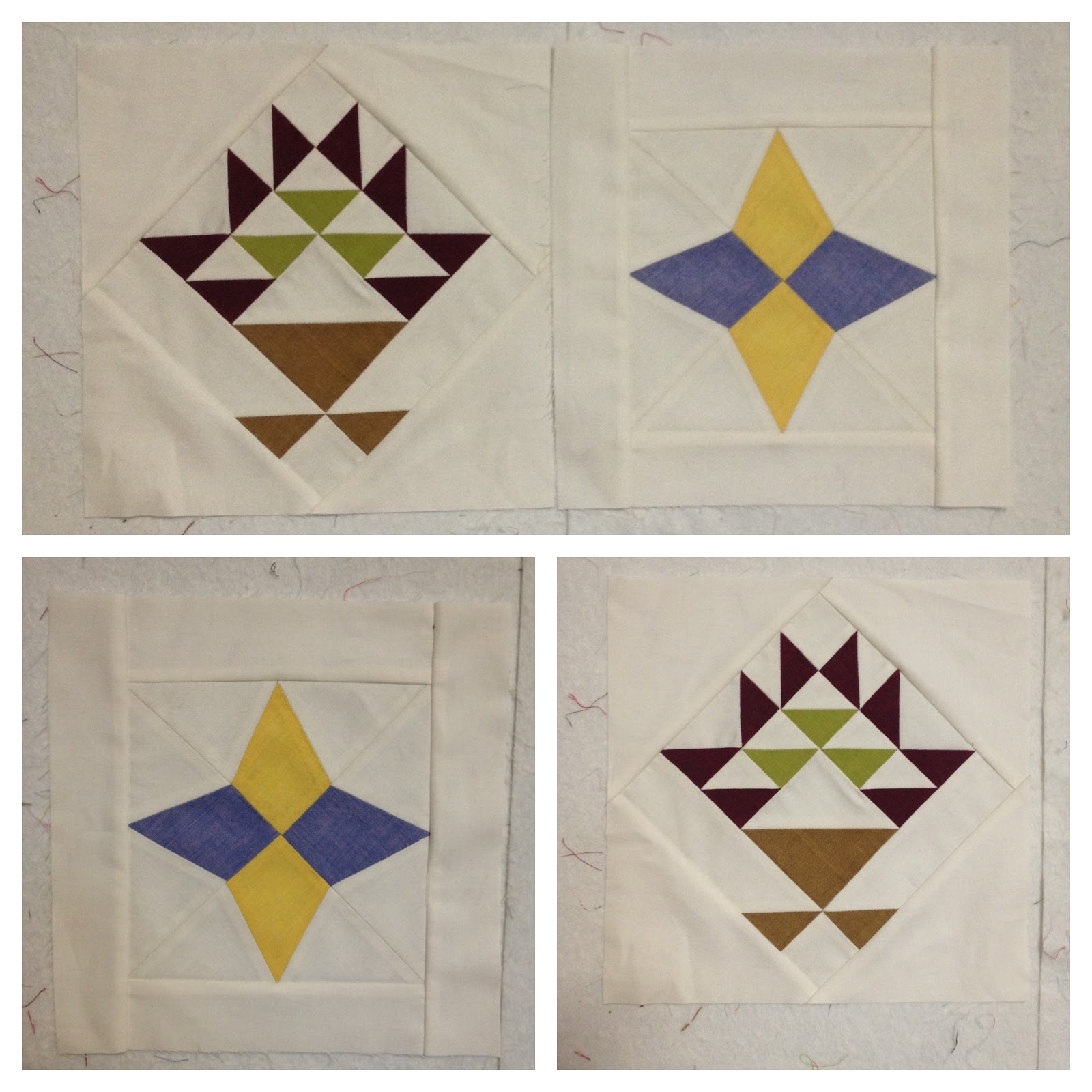 This is one of my favorites: 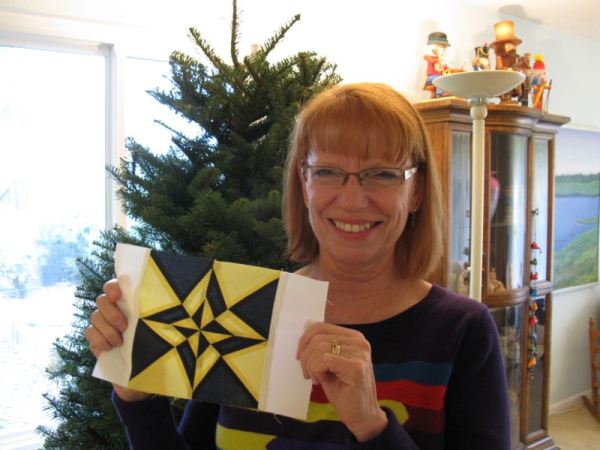 Elizabeth worked on pillow shams for a beautiful Christmas quilt: 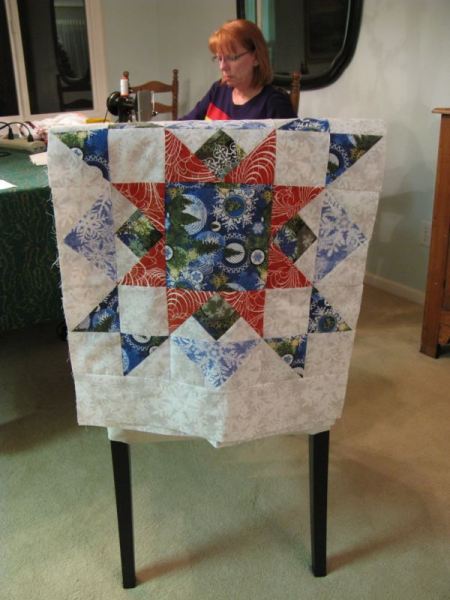 I started this cross stitch on the train--another benefit of not doing the driving! 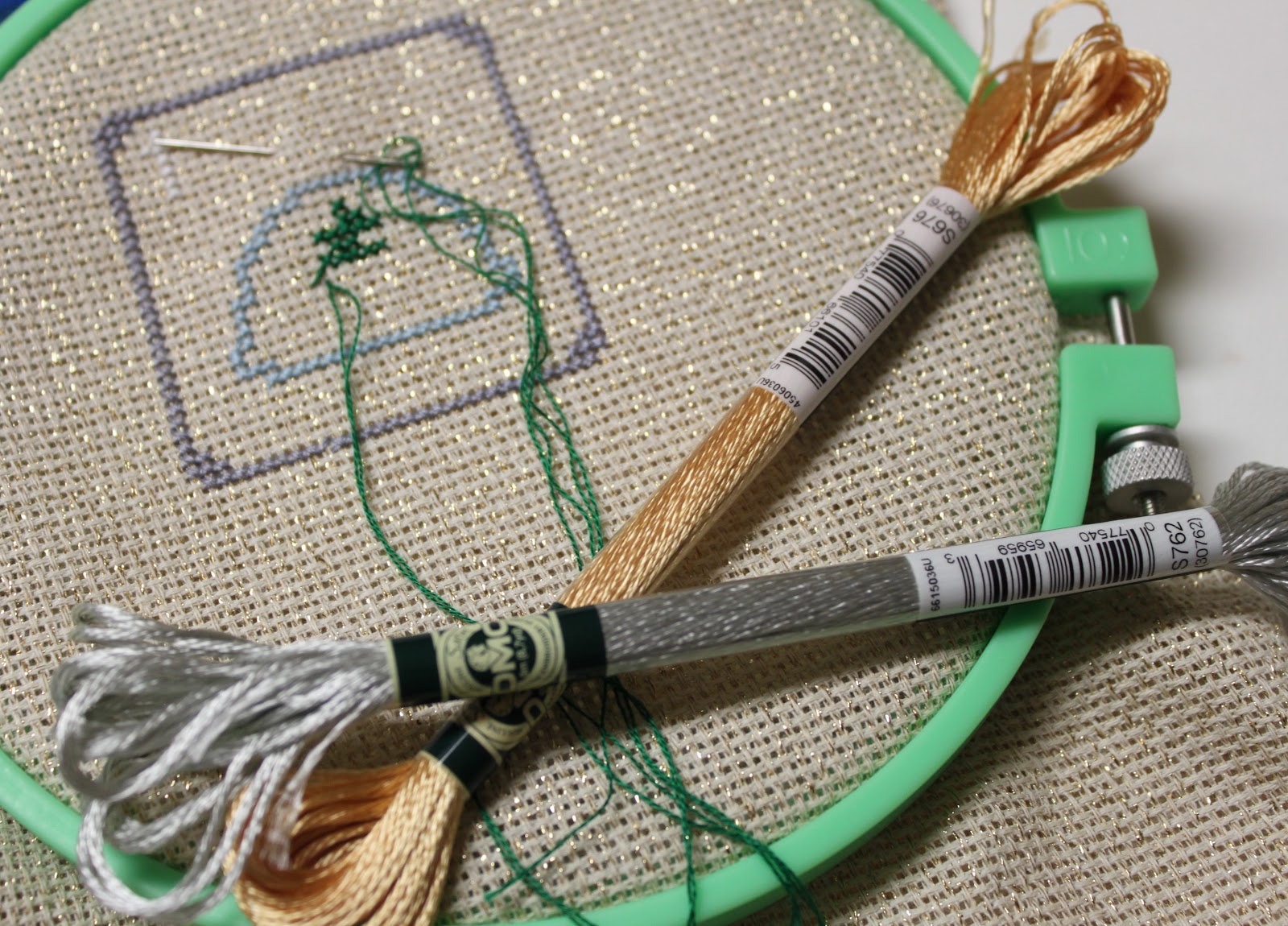 This was such a fabulous weekend. Sewing together, getting to be closer friends, both of which are works in progress. Thanks, Elizabeth!

How special to have such a wonderful friend. What an amazing time you both had!

I saw Elizabeth's post too...what a wonderful time you must have had!

Lovely post! You had a wonderful time, i can just tell! And I am getting excited about your FW! Are you?

What a lovely opportunity you had this weekend. I enjoyed reading and browsing the photos. Put out an APB on that missing block because it would be hard to work out which one to remake eh?

Looks like a lovely visit with a quilty friend - how fun!

Looks like loads of fun! Although in our local Ikea they now do the weighing and stickering after you've cut it, Weegie's are obviously either rather less honest or wouldn't know a cotton from a linen!

That looks like so much fun! I wish we'd get an Ikea with fabric closer.

You must have had a blast Cindy! Watching for more of your quilt.

What a lovely post! My nearest Ikea is like Katy's and they weigh and label the fabric after you've cut it. No idea if they've always done that as I've only just noticed the fabric! Love that music fabric - have you played the tune yet?

Looks like a great weekend, full of fun and productivity. I am looking forward to a day or two of sewing after my semester ends.

I was wondering where I found that cross stitch pattern :) As soon as I saw it I had to buy it. What do you have planned for yours when its finished?

I thought of your girls enjoying each other's company last weekend....so fun to see what you were up to. Yay! Progress on the FW quilt..I can't wait to see your top all together. Last summer I purchased some IKEA fabric and had the same slack jawed response to the 'help yourself' sign. I was just sure they would measure it when I checked out, but, nope! I guess they can afford it if someone is dishonest....the help was cheap!

so fun!
Nice to see the FW again and the cross stitch is looking good, love that shiny fabric! I have one of those hoops too and I love it! :)

So much fun and your blocks are amazing!

Fab blog post, my dear friend Cindy, and you are #1 on my People-to-Comment on list, as it should be. I had a great time and glad you had fun doing all our stuff. We're STILL eating chili (tonight's dinner), but I think that's probably it.

I loved all your blocks--hard to choose a favorite! Have fun sewing in Pismo.

Looks like so much fun! I'm a little green here! :-) I love those pouches. Looks like you got a lot done, too. Glad you had such a good time!

What fun! Those pin cushions from an antique quilt look adorable. Can you post more pics of one? I'm so glad you had fun on your trip. What a journey that was! Cheers to good quilting friends!!

I'm so impressed that you made it through all of the Farmer's Wife blocks. I made it as far as buying the fabric :). I really do hope to actually make the quilt at some point. Oh, so much to do, so little time. Such a festive weekend and I'm so jealous you made it to Ikea. I love that place.

What a wonderful time you had! How great to get away to spend quality time with like-minded friends. That Elizabeth seems like a very special person. And how nice that you made it to Ikea. I've been several times and never purchased fabric. The ice cream cones always get my attention though!