To borrow a title from Jessica's recent post, I have had this on the back burner for awhile now.
Organizing is fun for me, so it makes sense that I would enjoy reading about how other people organize their things.
Who doesn't think organizing your spices alphabetically is a good idea?? Now that Mark has taken over most of the cooking (his idea because he loves to cook. Not a statement about my cooking skills....right, honey?) Anyway, he loves spicing it up. And while I think that it must make his cooking easier, I'm not sure that he really notices how organized the spices are.
CDs. Is it even necessary to mention how much easier it is to locate a CD when they are organized alphabetically? I'll admit to being in a bit of a quandary when it came to the Dave Matthews Band. Where to put that stack? B for band? M for Matthews? Arrrgh. I went to the music store to see what the professionals did. D for Dave Matthews Band. Of course!
Books. In our house not really much organization is needed. I donate books to Goodwill if they were so-so. I pass them on to friends if they were great. Kids books, of which we have quite a few...hey, Charlotte and Levi have their own ideas on book organization and I'm not gonna mess with their system.
And then I saw this on This Young House. 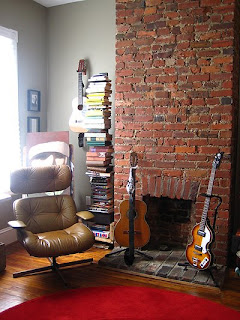 Inspiration....so our DVDs? Now organized by color. I'll admit that we don't have that many and this plan wouldn't work if we had stacks....but I sure like the way it looks now. 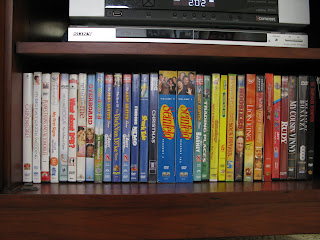 Curious about how I organize my fabric? Ah, that's a post (and lots of pictures) for another day...
Posted by Live a Colorful Life at 7/01/2009