I signed up for two things yesterday: The Slow Readers' Book Club thanks to Christina at Down and Out Chic, and A Year of Schnibbles thanks to Sinta at Pink Pincushion. You may be thinking that I have in the past complained about mentioned the lack of time to do all the things I want to do. So why am I adding two new things in this brand new year?
They will actually dovetail together quite nicely. For years, I listened to Books on Tape, books on cassette tape, that is. And then that company went kaput and I signed up for an account at audible.com where I could download unabridged books to my iPod, 12 book credits a year. In 2009, I actually chose 11 books and added them to my library, and then, in a whole year I listened to one book. One. It seems I had a self-imposed "year of silence." Don't ask me why. I never could quite figure it out myself. So along comes Christina, and I thought to myself that this is just what I need to get me listening to books again. I checked, and sure enough the chosen book (Half Broke Horses by Jeannette Walls) was available on audible, I had one credit left, so I added it to my library, fired up my iPod and will start listening to it this afternoon...while I sew. 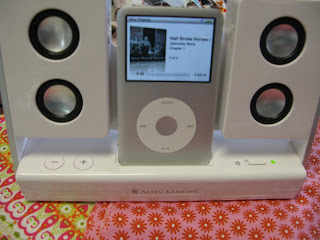 Which brings me to the second thing I signed up for. One of my favorite quilt designers is Carrie Nelson from Miss Rosie's Quilt Co. Among other great things, she designs smallish quilts called schnibbles, usually about 30" x 30" or so. The members of "A Year of Schnibbles" make a different quilt each month. Small quilt. I think I can handle it. I'm a little late to the party, as the "year" started in September, but I think they will let me party along anyway. And the pattern for January is Madeline. And can you believe it? I already have everything I need, pattern, fabric, and whole nine yards (or rather lots of 5" squares and less than two yards for the border, backing and binding), thanks to a birthday gift certificate from my parents. 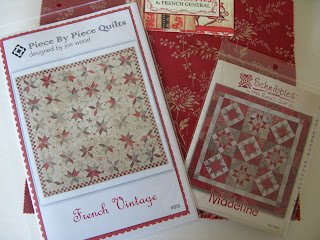 So (sew), two new endeavors to start the year off in an inspirational and creative way, and no money out of my pocket, at least not for the month of January!
Posted by Live a Colorful Life at 1/05/2010

You are set to have some fun! Audio books whilst crafting (knitting or quilting especially!) is perfect!! And how awesome that you already have the fabric for your January Quilt?

Welcome to the Schnibbles party :-) It has been a lot of fun, and I like you love Carrie's patterns. I am awaiting the arrival of my Madeline pattern. Have not decided on fabric choice yet.

I just finished up reading "Half Broke Horses" and LOVED it. Let me know what you think!

(Did you read "The Glass Castle?")