Community: The "one in every color" edition

This is Jessie and Luke. Aren't they adorable? They are getting married on May 22. 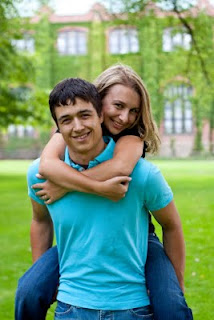 You may remember her from French Kiss fame. 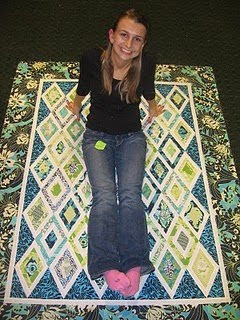 Nothing means more to Jessie than her friends and family. Having a quilt made by people who are part of her life, her community, even some she has never met but who touch her life in a meaningful way, was a priority. She came up with a plan. Everyone would get some black and white fabric and then color would be added to the block. For those who were quilters, or were at least familiar with sewing, they could add whatever color they wanted, choose whatever block pattern they wanted, as long as it was 12 1/2 inches unfinished. For those who were not quilters/sewers, or if she wasn't sure, she would make a little kit with the pieces already cut. It just needed to be sewn together. In addition, each person was to take a picture with their quilt block and write something, a piece of advice, a memory, a verse, whatever, on an enclosed card that later will be made into a scrapbook.
Lots of people were included. Because Jessie is loved by a lot of people. The blocks started coming back. Lots of blocks. She had a big design wall at home and the blocks started going up. In a gorgeous array of color.
Finally it was time to put the quilt together. So on Saturday, we had a quilting bee at my house. We thought Jessie would just lay out all the quilt squares in a color arrangement that made her happy. But then we discovered that some of the blocks needed a little adjustment. Not unusual. That happens any time you are working with different people, different machines, different skill levels.

So we spent all day Saturday sewing, un-sewing, re-sewing, arranging, rearranging. We had a great time. Her father, George, an avid fisherman, even sewed a block.  Jessie's mother, Sue, is still in the hospital, but she would have loved sharing this weekend with her daughter. We all missed her. 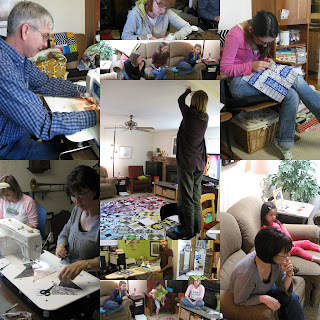 (click to enlarge)
By Saturday night, the blocks were all arranged on the floor in my family room, all 72 of them! This quilt is visually spectacular. But the best part, in my opinion, is the little stories behind some of the blocks. I know there is a lot more here that Jessie could tell you, but here are some of them. 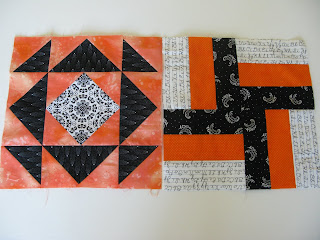 The orange corner was conspicuously sparse. Go figure. My original contribution was the block on the left. Since we needed a few more blocks to make the quilt eight blocks across and nine blocks down, we actually sewed a few extra blocks on Saturday. Since that time, more have arrived in the mail, but Jessie has a good plan for those as well. Since she is planning on being a teacher, the fabric with the cursive alphabet seemed like a sure winner. 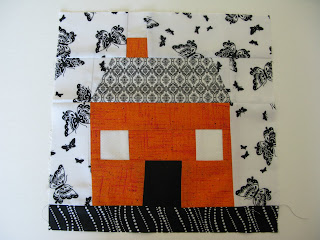 Jennifer, who is the paper piecing queen in our group, grabbed some orange fabric and had this cute little house sewed together in no time. So the orange corner is now well represented. Whew!
Our daughter-in-law, Christa, searched block patterns and found one called Wedding Bouquet. How appropriate. 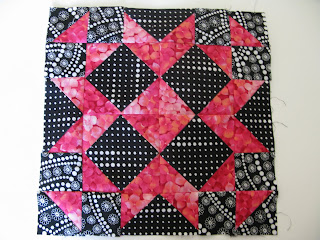 Jessie's Aunt Maggie, and cousins, Tanya and Kim (who were part of the "sewing staff" all weekend), each made an Ohio Star block, but in different colors. 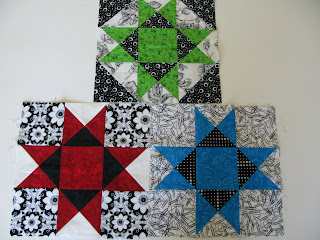 Another of Jessie's aunts, Cynthia, along with two more cousins, Jennie and Katie, did the same thing: 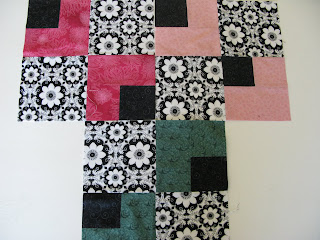 A few weeks ago, Jessie flew up to Idaho and helped her former roommates from the year she went to the University of Idaho sew some Card Trick blocks. Luke ended up doing the sewing on one of the blocks instead of Jessie's roommate, and so he intentionally turned part of the block around. 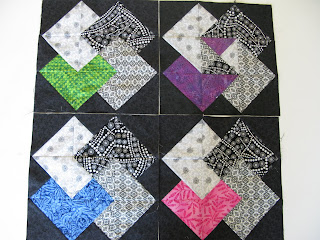 Through a series of events, two people who have never even met Jessica ended up sewing blocks for her quilt. One is our niece, Becky, whose mother is also battling cancer. Another is Grandma G. Mark always calls her my email penpal, although we finally got to meet in person last August. But she has found her life woven into the lives of several people here in Fresno, including Jessica. Notice how their blocks are the same, only in different colors? Notice how the pattern forms kind of a circle? Intentional. Jessie told me that they are part of a circular connection that connects each of them through the internet. I think I might have teared up a little when she told me that, since that connection also runs through Mark and me, the two people who actually know Becky and Grandma G. 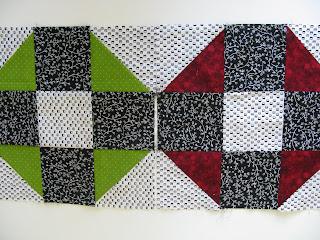 The block on the left was made by Valerie, Jessie's sister whose idea of sewing involves some fabric and a glue gun. Yet she pieced this fabulous block with all the pink paw prints. And Val's boyfriend, Matt, did the block on the right side. Awesome! 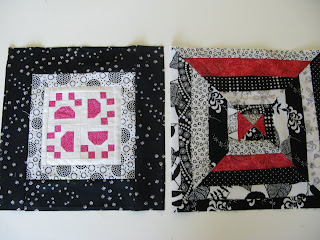 Curious to know what the entire quilt top looked like when it was finally sewn together? 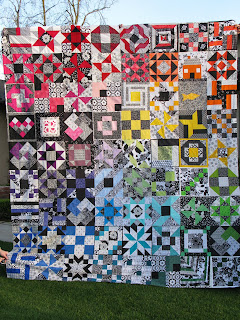 (click to enlarge--definitely worth it!)
Isn't it amazing? It goes to the machine quilter today. 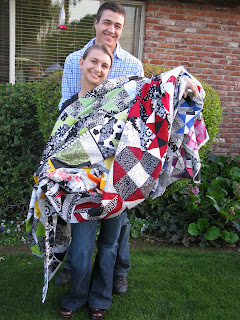 I read this quote today: "Friendship is the golden ribbon that ties all hearts together."  Jessie, it has been an honor to work on this quilt with you. Our hearts will be forever bound together.
Posted by Live a Colorful Life at 3/16/2010

Email ThisBlogThis!Share to TwitterShare to FacebookShare to Pinterest
Labels: color, family, friends, one in every color, quilting