Welcome to the first bit of randomness of 2012.

Did anyone other than me briefly considering asking Santa for some incandescent lightbulbs for Christmas? I kind of panicked there for awhile when I heard that starting January 1, it would be illegal to sell incandescent lightbulbs. I'm all for living "green" and conserving. We try to reuse, recycle, and reduce with the best of them. But I just can't imagine those pigtail lightbulbs in my dining room light: 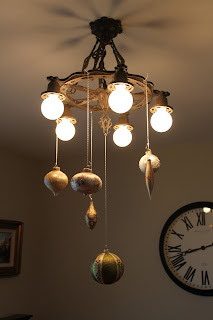 I guess we got a reprieve. At least for awhile.

We have no snow in Fresno. In fact, for the whole month of December we didn't even have any rain. Not a good thing. So this cute little card from Tammy is the closest we got to snow. And the red velvet fudge? Highly recommended. 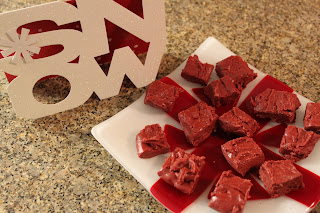 Last week Mark and I needed to have something recorded at the county recorder's office. We made our first trip downtown, only to find out that the form we had used (and had notarized) was obsolete. Ack. Talk about your taxes at work. We were the ones who did all the work! Why? Here's why: 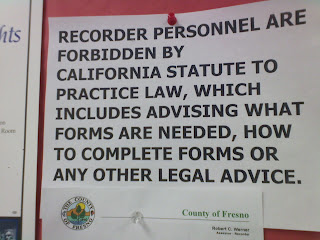 Really? The recorder's office biggest job is the recording of forms. Um, thanks for not being able to advise which forms are needed! Supposedly you can pick up legal forms at stationery stores. But not the form we needed. I finally found it online. For $20. Another trip back downtown to get it recorded. The posted recording fee is $26, so when the recorder guy told us $48 we almost choked! Can someone out there tell me what a SS redaction fee is? We paid $2.00 for that. In addition, $2.00 ERDS, $6.00 modernization fee, $2.00 micrograph fee, $5.88 DA fraud fee, $.12 GF fraud fee and $4.00 trial court fund fee. Sheesh...

Isn't this the cutest laminate raincoat? I was a little freaked out to sew an actual item of laminate clothing myself so someone else made it. And it's looking like this will be the year when we don't get any rain. Figures... 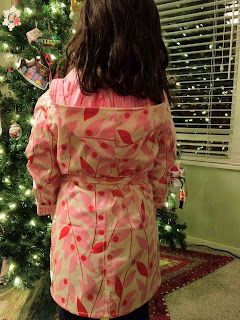 Charlotte gave us a concert of Christmas music. 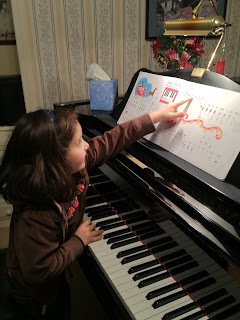 I love seeing these two together: my granddaughter and my mother (her piano teacher). 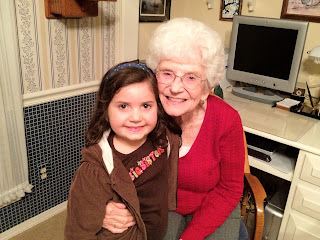 Mark had an email exchange with one of our dear friends in Kansas. Part of her email included this sentence:

Stephanie has taught all her boys to cook and bake plus they also learned to knit and crochet!

Cool. This was his reply:

What a gift Stephanie has given her family cooking, knitting and crocheting . actually I learned to  knit when I was young and haven’t done it since.

What?? I have recently taken up knitting again and he never mentioned this to me! He asked for a refresher course and of course I caught it on film. 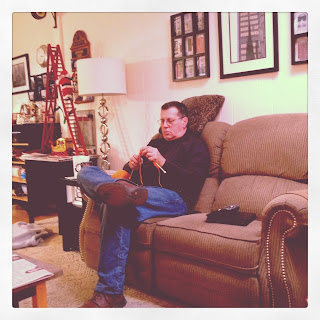 Maybe he'll help me with this afghan! 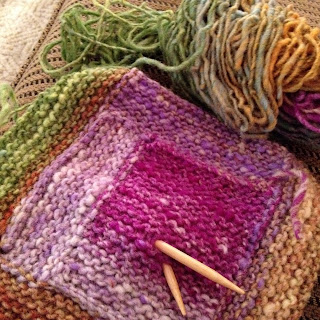 When Mark and I were first married, we had very little money. When special occasions rolled around, we didn't have money to spend on cards. So we would go to the store, each choose the card we would buy IF we had the money, read each other's card, and then put them back in the rack. It has become kind of a joke over the years. Our family knows about it, our friends know about it. We got this, um, envelope from Mark's brother and his wife. Haha! 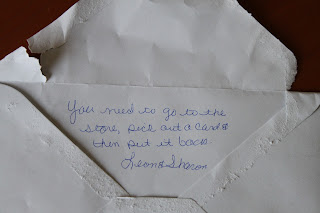 Our son, Aaron, is an optometrist. I saw this mug on someone's blog (sorry--can't remember which one) and knew I had to have one for myself. They also had a similar mug about coffee. So I bought that one for Aaron and this one for me. 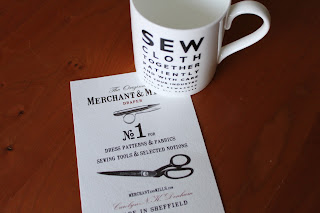 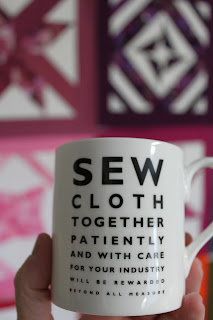 Can't read that bottom line? Email me. I'll book you an appointment with our son, the optometrist. (BTW, it says, "beyond all measure").

Oh the things you will find...when you decide to do a massive clean-up and reorganization of your living space--cabinets, drawers, shelves, closets. I found things I had lost/misplaced. Tossed lots of things and wondered why they hadn't been tossed long ago. And added to my button collection. What do you do with all the extra buttons that come with a new garment? I threw all those little envelopes in a drawer. I decided to release them all from their envelopes. Wow, that's a lot of buttons. I don't even own most of these garments anymore. 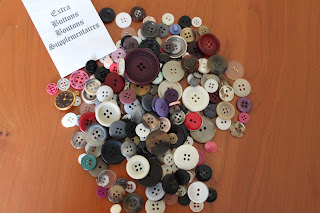 I'm starting 2012 in a colorful way, with these note cards. 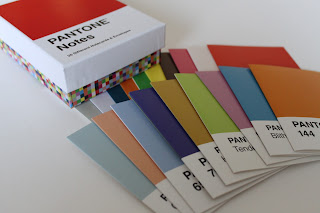 By now you must certainly be aware that Pantone has declared the 2012 color of the year to be Tangerine Tango. I have been collecting lots of random pictures of orange and tangerine (so you probably know what that means--a post of really random orange things...) I'm thrilled with the choice. How about you? Does another color seem more appropriate for 2012? Do tell...

Wow! YOu packed a lot in that post! I am with you on the light bulbs...I have been hoarding them. And aren't you glad your tax dollars are working at the Recorders Office!! Love the story about the cards...so cute. Finally, I am thrilled about the color choice!!!

Your random posts are becoming my most favorite. Seems like between lightbulbs and recording fees, the government is getting its ounce or two of flesh, wouldn't you say? It's so refreshing seeing a man knit. The only fellow I can recall who does that is Rosy Greer, and that certainly dates me! I'm lovin' that we're Tangoing our way through 2012. It's a fav color and I'll be trying to honor it. Thanks for a fun spectrum of things to think about.

Oh, I love that mug and now I need one. (PS I could read the bottom. hehe)

I like your hubby knits. I try to get hubs back into a hobby, any hobby, working with his hands to reduce stress but he hasn't seen the benefit so far. Maybe one day.

As for the Recorder's office? Glad it wasn't me, I'd have been livid. -sigh-

Oh, I love that mug and now I need one. (PS I could read the bottom. hehe)

I like your hubby knits. I try to get hubs back into a hobby, any hobby, working with his hands to reduce stress but he hasn't seen the benefit so far. Maybe one day.

As for the Recorder's office? Glad it wasn't me, I'd have been livid. -sigh-

I totally agree, I'm all for eco but those 'green' lightbulbs are ugly and useless!! My house feels so dark with them on and they take too long to come on properly. urgh!! Admin and forms are so annoying, why can't they just make things simple?!
Love the mug and that raincoat is gorgeous :)

LOVE IT... ALL. Your random posts are great fun, and it tickles me to think you never new your husband could knit!

Did you order your mug from the UK? I've seen it before and think I need one...

I LOVE the Pantone note cards!

That is so funny! Bruce and I have never stopped "not buying cards". We read each other special Christmas cards at Target this year. Cards are over-priced now and we love trees! Janice

That mug is fabulous. I'm off on an internet hunt to find one.

I must rant about the light bulbs! So they want us to get rid of the incandescent bulbs and replace them with fluorescent bulbs that contain poisonous mercury... which require special handling after they're burnt out... and don't you dare drop them, 'cause if they break... ACK!!! Once they get everybody switched over to them, they'll outlaw them because they're dangerous to our health. Okay, I'm done.

I love the raincoat... and the knitter... and everything else! And my extra buttons are still in their little envelopes in a drawer. :)

Great post - concerning the lightbulbs - I would still stock up when you can find them since it is only a temp reprieve, the stores may decide not to restock. I've see ads that say "while supplies last".

I am guessing that the "SS redaction fee" means that they will try to make sure your social security number is not included in the recording, especially if it's posted online.

I also release all those tiny buttons into the button stash.