It's a little disconcerting to start the week with a security guard walking up to you to question what it is you are doing.

I drive by a cardiology office at least five days a week to pick up my medical transcription for my "real job." Only last week did I notice what a great quilt design the grillwork on their parking garage would make. This morning I stopped to take a picture. A couple minutes later the security guard came up to ask what I was doing. "Oh, I'm a quilter and I think that (pointing across the street) would make a great quilt design." His eyes glazed over somewhat. "You're not taking pictures of patients or cars are you?" he asked suspiciously. "Oh, no. Just that great grillwork on their parking garage." He did walk away at that point but I'm not sure whether he believed me or not.

So after all that, don't expect any kind of a decent picture. This was snapped on my iPhone, too much sun, etc., and has already been edited. 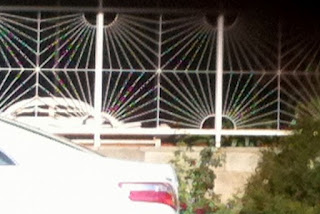 But it would make a great quilt, don't you think?

We have been gone since Thursday night, and spent all day Friday, Saturday, and until about 4 p.m. yesterday at the Happiest Place on Earth. "Princess" pictures to follow. 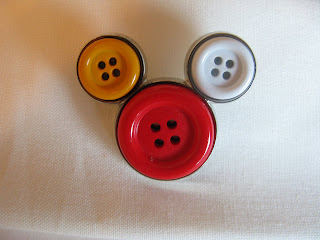 We had such a great time and even though Mark and I have been there many, many times, it was different being there with a 3-year-old and almost 5-year-old. We saw so many things we didn't know were there and it was wonderful seeing them through different eyes.

While we were there, my guest post went up at Chasing Cottons. I had sent the post to Rebecca at the beginning of last week, and after it went up on Friday, one of the commenters mentioned that I had given some incorrect information on sewing needles. I happened to be reading the comments on my iPhone while waiting in line for a ride, so there was absolutely nothing I could do about it other than to email Rebecca and ask her to edit the post for me. Frustration on a couple of levels. First of all, the commenter was correct, and secondly, I couldn't correct the information myself. Ah, the joys of technology...

However, I then reminded myself that I was standing in line at Disneyland, while my friend Anne was living in her RV because she had no phone or electricity due to all the tornadoes in Alabama. Sometimes it's good to put things into perspective.
Posted by Live a Colorful Life at 5/02/2011