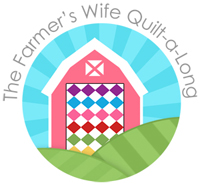 The writer of this week's letter, from Park County, Wyoming., spent the first two years of married life as well as much of her childhood in Chicago. She was apparently not impressed.

I'm a city girl. I've lived in several large cities for a good deal of my life, so it's hard for me to make the comparison. But I like to imagine what this would be like: "There is not space here to tell of my love for the panorama of ever-changing beauty that unrolls from my cabin on the hilltop." 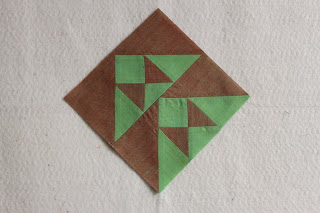 It was interesting that already in the 1920s, the writer was convinced that "when America wearies of jazz and reverts, as a nation, to the ideals of her pioneer forefathers, many will find in the simple joys of the country an antidote to over-sophistication." What, oh what, would she think of 2011?

The second block is #34, Flock. I have always been fascinating by the way birds often fly in a V-shaped formation across a blue sky. How do they pick the leader? 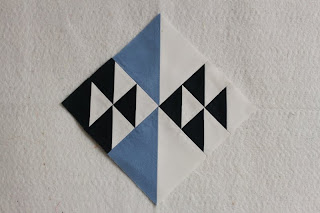 As far as shot cottons, I was less pleased with these two fabrics, because it seemed that both the weft and warp threads were nearly the same, so there isn't much contrast no matter how you turn the fabric. But I do like the strong movement of the block.

Don't forget to check out Carla at lollyquiltz to see what her fabric choices were for these same two blocks. 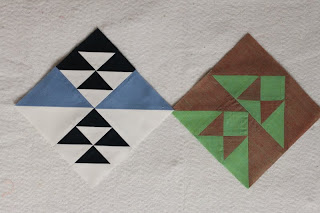