Do you have weeks where you are spending your time creating and not blogging? Or blog reading and not creating? For some reason I can't seem to do both at the same time.....the key word being "time," as in not enough time to do both.

And also I got a jury summons for this week, so every day seems like a countdown until 5 p.m. where I find out if I'm on call for the next day or actually have to trek downtown. That seems to be affecting my frame of mind as I keep checking the clock to see how long until I can make the dreaded phone call at 5 p.m. to find out my fate for the next day. Have any of you been on a jury?

So anyway...to keep my mind off things I have been cleaning up, clearing out, and doing some DIY projects around the house. Last week I posted a picture of the new shelf in our entryway. The picture on the left was my inspiration photo. 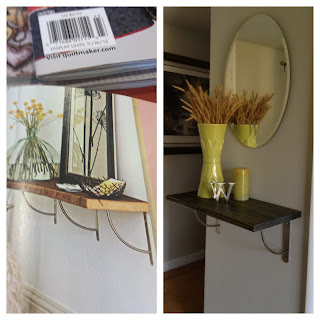 I really had my heart set on the vase in the magazine photo, and I actually found that vase at Pier 1. Thankfully I had my tape measure with me because the base is 14" and my shelf is only 12". So I stopped by World Market and found an even better vase. Project completed. 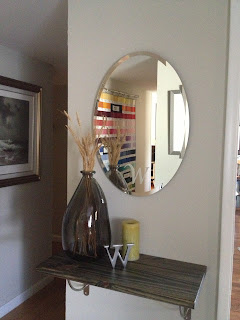 Next I attempted some modern art. My friend, Vicki, did the most awesome painting (on the left in the picture below) by just dripping paint down a canvas and then spraying it with water as it dribbled down. So I went to Joann's and got a 30x40 inch canvas (50% off) and bottles of acrylic paint (only 59 cents each). 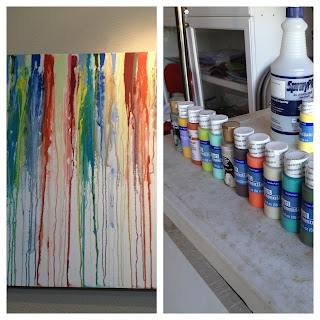 I was attempting "planned chaos," and posted that phrase on Instagram. Ken Kaufman (CEO of Robert Kaufman fabrics--gasp!) commented on the photo and said he liked the phrase "controlled spontaneity." I think I like that one better too. Of course there is no way mine would be just like Vicki's and I like her drips halfway down. But I'm pretty happy with mine. And Mark likes it. So that's a big plus. 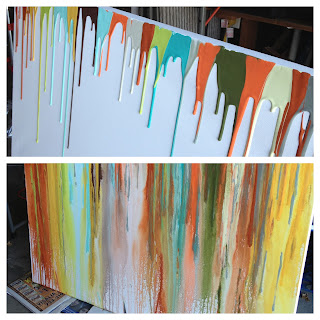 Next up--recovering our two kitchen chairs. It only took a yard of home dec fabric (50% off from Hancock's). 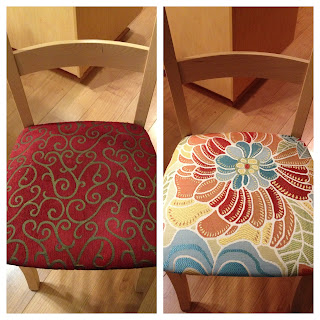 I had enough fabric to have that big flower match on each chair, but I used a different flower on the second chair. 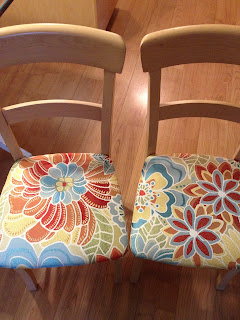 This was actually Mark's idea. He said, "Why would you match them? You love things that are mismatched." True enough. 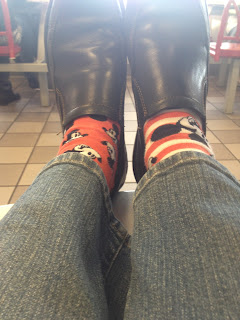 So now I need an opinion. I painted this perpetual calendar in 1976 when I was in my tole painting phase. 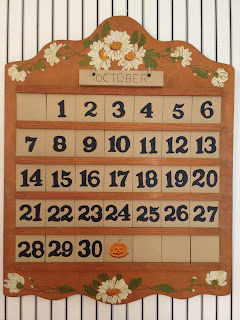 I have enjoyed it all these years but now it just looks so dated. I thought about painting the whole thing black, covering all the daisies. But then I got kind of nostalgic about it. I think I'll just pack it away for now. Would you keep it on the wall as is? Pack it away? Paint over the flowers?

I repurposed this shelf. It used to be in the hallway displaying a collection of angels. It has a new life as thread storage. 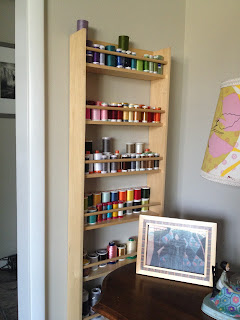 I'll end with a little orangey goodness. Amanda Jean is a cover girl. Such a fun orange quilt. 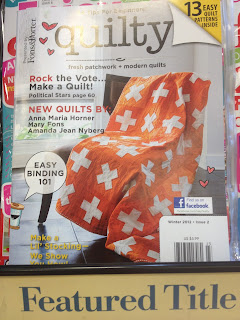 A friend was going through some of her quilting magazines and sent this picture to me. 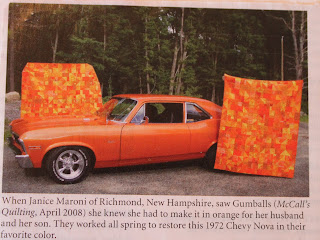 And today Deborah gave me an early birthday present, wrapped in orange tissue and tied with a (very usable) strip of fun orange fabric. 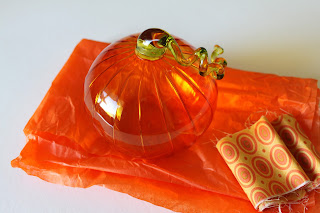 Of course it's fun to close with a picture of my craft partner. We made these cute little paper cone people with Halloween costumes (if you have small children, this is a really fun project.) So when we lined them all up and I asked him to give me a funny face, he was more than happy to oblige. 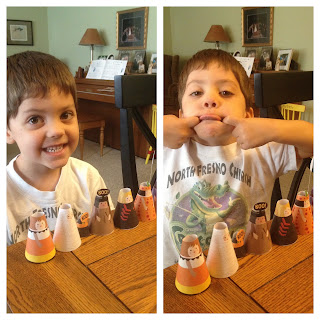 It's your turn. Feel free to be chatty.