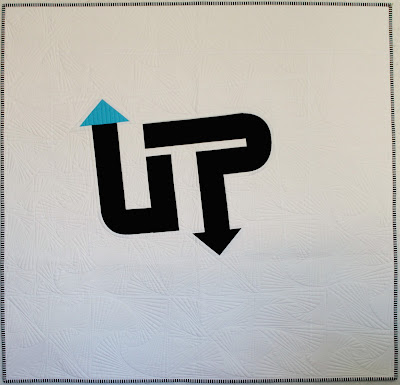 This quilt has been finished for quite a few months, but I don't think I ever posted anything about it.

So there is an independent clothing store in Fresno, with this logo. 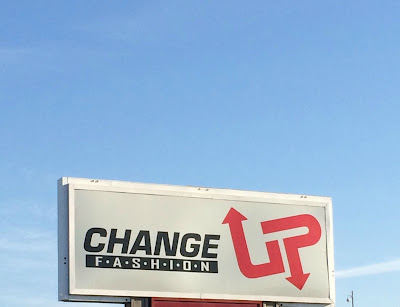 One day, as a personal challenge, I decided to make a quilt with just the word "up." I like the word itself juxtaposed with arrows going both up and down. Thus the name: Just Point Me in the Right Direction.

With so much negative space, it required lots of really fabulous quilting. And of course, I can always count on Darby. She did a beautiful job of custom quilting in all that white space. 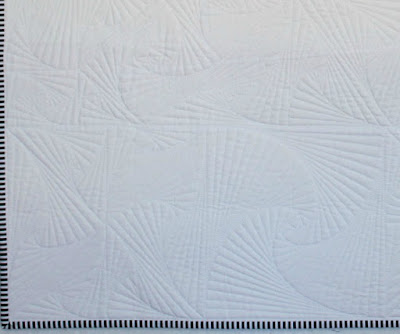 This is a departure from my usual style, and it is unlikely that this quilt will be hanging on the wall in our home. It was more of a personal challenge.

But then it crossed my mind that it might have a tiny chance of being accepted for QuiltCon 2016. Last year I only submitted one quilt and it was not selected. "Not selected" sounds so much better than "rejected," don't you think? Especially when you see the many superb quilts which have not been selected for the upcoming show.

Anyway, I received an email the other day with the judges asking to see a photo of the inspiration, as they thought it might be "too derivative." After sending them the above photo, it was indeed deemed too derivative and would not be accepted into the show without written permission by the owner of the store, who owned the rights to the logo.

Yikes! I know this is getting wordy. But condensed version: I went to the store in the morning and as I kind of anticipated, there was a language barrier. The man behind the counter didn't seem to understand my request.  Mark went back with me later in the evening, when another employee was at the store, who was able to translate my request. Ultimately it turned out that the person behind the counter was indeed the owner. He eventually signed a release form for submitting a quilt which had copied his store logo.

Nevertheless, I was still shocked to receive an acceptance letter, not only for this quilt, but also two others: Delta Breeze and I've Got Your Back (I actually submitted the back of the Bullseye quilt rather than the front!). 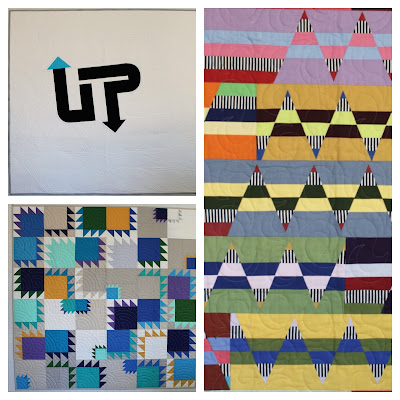 I also have another small finish. I had these kits for ornaments made from zippers. The other night I plugged in my hot glue gun, and after lots of finger contact with super hot glue (ouch!), here is the result. The pattern gives the option of sewing or gluing. Were I to ever do this again, I think a needle and thread would be the way to go. But still, burned fingers aside, I think they are super cute. And I'm hoping the grandkids don't really notice some stray glue clumps here and there... 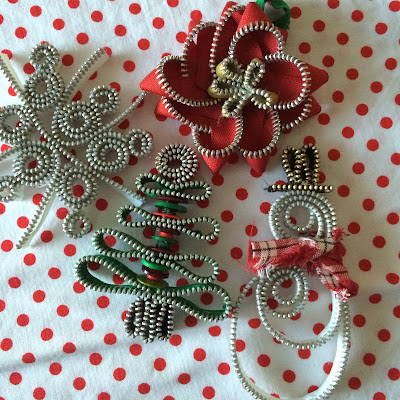 I'm linking up to Crazy Mom Quilts, TGIFF, Confessions of a Fabric Addict, and Fort Worth Fabric Studio. Enjoy your last week before Christmas!

Congratulations on your quilt show skills! And I think those ornaments are lovely.

Congratulations on your quilts being accepted, they are beautiful! I don’t know anything about the acceptance criteria for Quiltcon, but read some lovely discussions on blogs. On Instagram quilters who’s quilts were rejected started saying, their quilts were #toocoolforQuiltcon. I love that.

What a neat story behind your Up quilt and congratulations! I would feel elated. {My inexperience showing} is it paper pieced? I saw the zipper ornaments on IG and love them!

Congrats! I love that you entered a quilt back.

(I received a "too derivative" email too; thankfully I also was able to obtain written permission from the original designer.)

Wow, good for you to get permission, many entities would have withheld it. It is a lovely quilt and I am excited to see all your quilts at QuiltCon.

Congrats - they are all great and I love the zipper fun you've got going on.

I love the sense of humour in the direction quilt. It's really fun.

All three are so beautiful -- and how fun to have such a story to accompany "Up." Congrats on the QuiltCon success!

Congratulations on having your quilts accepted into Quiltcon- what an honor! I was wondering about the legality of the UP design? But apart from the minor language problem, it seems to have been solved rather easily! With all these entries I've seen for Quiltcon, I have decided that 2016 is my year to submit a quilt to a show! Not to come up with an idea!!

I already said this on Instagram but I am just so so excited for you. Three quilts into QuiltCon!!!!! Super cool and well deserved. Kind of wish I had entered something.

Jak and Will by Stephanie said... #

Congrats on the quilts being accepted!

Your ornaments are beautiful. If you have 'spider webs' or clumps of hot glue, here's a little trick. Take a blowdryer to them. It gets rid of all the little extra strings and can help desolve some clumps if they're really noticeable.

CONGRATULATIONS! and thank you for sharing on TGIFF

Cindy. What will you think of next! Very fun challenge and congrats on the acceptance - es : )

Congrats! The UP quilt is so unique.

So very excited for your acceptances, Cindy! Can't wait to see them all in Pasadena!