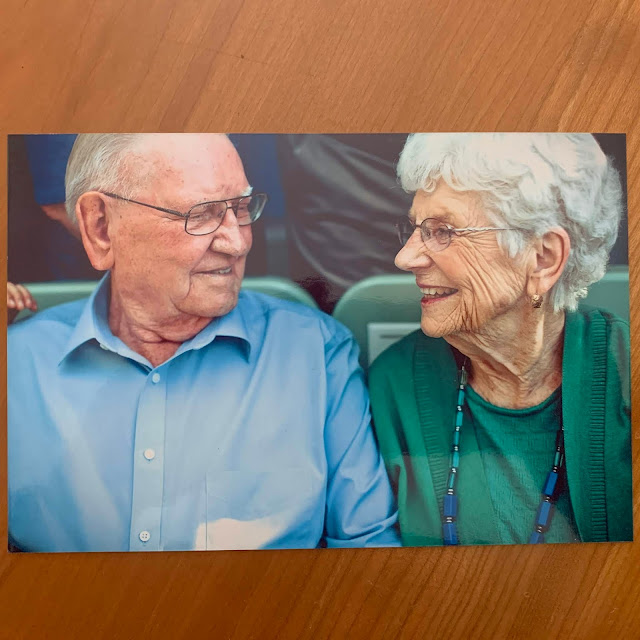 This is my very favorite picture of my parents. It was taken shortly before my father needed to be put in a memory care facility. In retrospect, even at the time of this picture, he was having memory difficulties. But then things took a sudden turn for the worse, nearly overnight, and my mother could no longer care for him.

It was a difficult transition. He didn't understand why he was in a care facility. He was angry and confused. He cried a lot. It was hard on my mother.

About six months later, she realized she could no longer take care of their home by herself. At that point, we moved both of them to a memory facility where they could share a room together. That was not an easy transition for my mother. She did not need to be in a memory care facility. But she said she would like at least "one more year of living together with dad."

Their room was cozy and comfortable, a miniature version of the home they had shared together in Fresno. 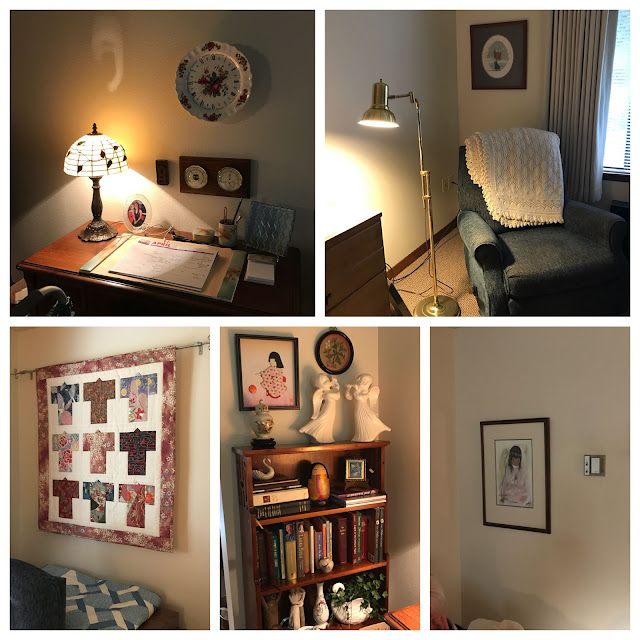 What we never would have anticipated was that she would pass away before he did.

For nearly the last year, he has lived in the room alone, and lonely. In the recent months, he has been falling. Frequently. In the last six weeks or so, four of his falls have required a trip to the emergency room, mostly to check head trauma. While he receives very good care in the memory care unit, it has gotten to the point where he needs closer supervision.

Last week, he had a fall that was quite severe. (ALERT: Scroll past the next picture if you are squeamish.) 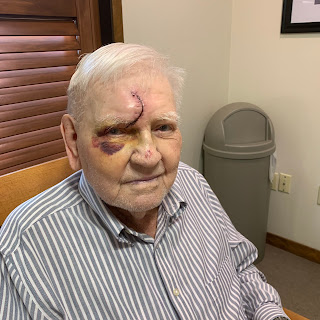 Plans were already being discussed about transferring him to the skilled nursing section, and this clinched that decision. Even so, he had another two falls. It is truly amazing that he has not broken a bone.

Yesterday, Mark and I moved his things to a new room in the skilled nursing section. He will now be in a room where the door is always open. And he has a roommate. Both of these things make him unhappy. Angry, in fact. He is angry at us, feeling that nobody talked to him about this decision, even though we had prepared him and the staff mentioned it multiple times. But of course he doesn't remember. Mark and I decided to move his things over to the new room and then leave, allowing the staff members to take him over to the new room. I was emotionally drained when we got home last night.

His roommate seems very nice. I kind of feel sorry for him.

Today we will go back, to finish filling out paperwork and clearing out his room--also stressful, as what do we do with the last of my parents' belongings--several items of furniture that were handmade by my father, along with my grandmother's sewing table that my mother used as a desk. We will keep the bookcase that my father made in high school--it will be a nice addition to my sewing room. I'm not sure about the sewing table yet. We are downsizing ourselves, and Aaron and Christa have no room for it either. Fortunately they already have some pieces of furniture that my father made and/or refinished.

We will stop in to see how his first night went. He may not be talking to us.

Transitions are nearly always difficult. My dear friend, Elizabeth, says her father calls this "the era of subtraction," part of the ebb and flow of life. We are trying to help my father through this phase of ebbing, in which he is losing little pieces of the life to which he was accustomed.

And the hard reality for me is that I realize my era of subtraction isn't that far off in the future. I need to make the most of each day and make sure my loved ones know how much I cherish them.
Posted by Live a Colorful Life at 6/25/2019